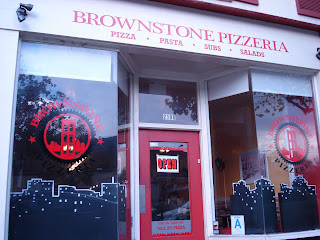 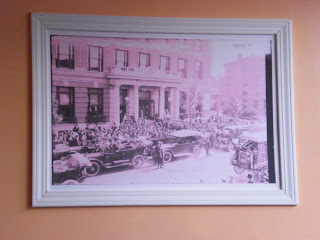 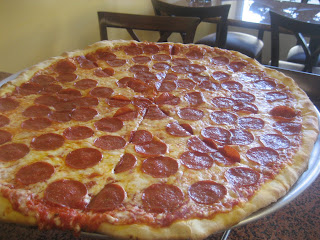 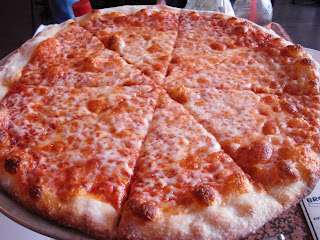 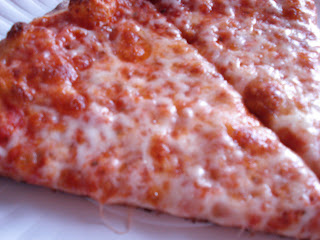 I first went to Brownstone almost exactly one year ago, shortly after they had opened, with my friends Bryce and David. We got there exactly at 11:30 - their posted opening time - and then stood around on the street for about 15 minutes while the door was locked. There was a guy inside making pizzas, and occasionally he would glance over at us, but made no effort to let us in. Eventually a woman unlocked the door for us.

We were informed that they did not take credit cards, and they did not have any change in the drawer, so we had to pay the exact amount or not receive any change. (Bryce paid for the meal so I'm not sure what he did.) The interior of the place was sparse: a few tables and blank walls. And they only had three available toppings. So far I was not impressed at all.

But then the pizza came and it was great. There are perhaps hundreds of better pizza joints in New York City, but I was impressed with the quality of the ingredients and the size of the slices. The above picture of the pepperoni pizza is from that trip to Brownstone.

Almost a year later, my friend Elizabeth and I were both hungry, only we didn't know exactly what we felt like. I suggested driving down Colorado Blvd. in Eagle Rock and picking something that looked good. My first thought was Spitz, but there was no parking. Then I thought I should give Brownstone another try, and, since Elizabeth is from New York, I wanted to get her opinion of the place.

They had added some nice touches. There were logos painted on the windows, a couple flat screen TVs on the walls, and several photographs of New York. It was definitely a huge improvement. They've also added many more toppings to the menu, although we went with a plain cheese.

The pizza was still good, although we ordered a smaller size than I had a year earlier, so the pieces weren't big enough to fold. The crust was a little bit crisper than it should have been, but we both enjoyed it. (Elizabeth proclaimed it "good," which is definitely high praise from her when it comes to pizza.) It's not as good as Mama's in South Pas, though, so it may well be another year before I go back.
Posted by JustinM at 7:04 PM

For future planning what size pizza did you order the year previous that had folding capabilities?

The largest size. (I think they only have two sizes available.) The first time I got the larger one; the second time I got the smaller one. If you order a slice or two of pizza, they are large slices and you can fold them, as everyone else in the place was doing.