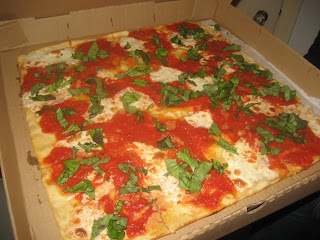 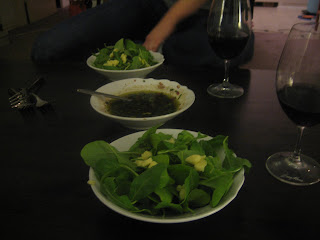 My friend Tracie lives just a couple blocks from where the South Pasadena Farmers Market is held on Thursdays. Sometimes we pick up a few things at the market and make dinner, or sometimes we just make a simple salad and get something else for dinner. On this occasion I made a spinach salad with some cheese we bought at Nicole's Gourmet. For dinner we ordered a pizza from Nonna.

I had never tried their pizza before. A couple weeks prior to this we had gotten a pizza from Briganti, which I enjoyed but did not love, so I was hoping Nonna would be better. We ordered an extra large margherita. It was very good. The sauce was a little on the sweet side, but the basil was very fresh and there was plenty of it.

I have not had Nonna since then, however, because shortly after this I discovered Mamma's Brick Oven. Nonna is great; Mamma's is even better.
Posted by JustinM at 4:23 PM

Mamma's? Yuck! Fake NY-style pizza. The only thing NY about it is the rude service