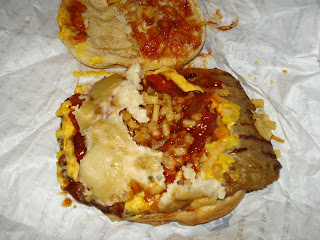 It is no exaggeration to say that during my senior year of high school I ate at Burger King four times a week. It was close to campus so that we could make a quick run there during lunch, it was cheap, and it was better than the other nearby choices (McDonald's, where we would have to run into Juniors, and a liquor store where the old lady was always mean to us after she got busted for selling us non-alcoholic beer.)

But in the years since then I have only had Burger King perhaps once or twice. My freshman year of college there was an In-n-Out a couple blocks from campus so that's all I would eat when I wanted fast food. Then when I got into my 20s I stopped eating fast food frequently. Now, whenever I try Burger King, I find it to be pretty terrible, and I can't believe I ever thought it was good.

(The last time that I can remember having BK was about 3 years ago. A friend and I were in a hotel in Denver, and she had the car keys in her room. It was, after all, her car. It was relatively late and I didn't want to wake her, so I walked to the nearest place, which happened to be a BK. I had an order of their chicken fries, which were one of the 5 most foul things I have ever put in my mouth.)

But I am always a sucker for a fast food item I have not tried before, so I decided to try the Steakhouse Burger. I accidentally ordered the "Loaded" Steakhouse Burger, though, which includes a mashed potato topping in addition to the bacon, A1 steak sauce, fried onions and cheese on the regular version.

I know it looks horrible. It was. It was so absolutely disgusting that I had trouble swallowing the one bite I took. The patty was rubbery and freezer-burned, the onion pieces tasted like hair, and the mashed potato topping (I still cannot get over the fact that some product developer thought 'Hmm, you know what would be good on a burger? Mashed potatoes!') was simply the worst mashed potatoes I have ever tasted.

I cannot emphasize this strongly enough: do not ever order this burger.