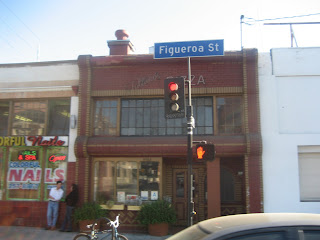 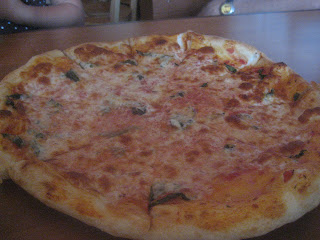 My 9 year-old cousin was visiting my parents for a week (her brother was doing UCLA basketball camp and this was her vacation) and my brother and I took her around to several places. Some of the things were fun (shopping for girlie jewelry and taking her out to eat) and some were not so fun (taking her to see, God help me, You Don't Mess With The Zohan.)

But my brother made a good point that all she had seen for several days was Arcadia, Sierra Madre, and Old Pasadena. "Why don't we show her some other things so that she doesn't think these places are the real Los Angeles?" he said. I agreed. So we took a trip on the Gold Line and got off in Highland Park to eat lunch.

I had never been to Folliero's; I don't think I had ever even heard of it. It was awesome. My brother and I got a basil and garlic pizza, my little cousin got a small cheese pizza that I don't even think I could have eaten by myself. With three drinks the total was about 22 bucks.

Both pizzas were great. We told her that we couldn't leave until she had finished her massive pizza. We assumed she would understand that we were joking, forgetting that 9 year-olds don't have finely developed senses of sarcasm. We were shocked that she was eating as much as she was, until there was about one slice left and she looked up and announced "Uh-oh," and went running off to the bathroom.

After about ten minutes my brother asked me "When do we go look for her?"

"I don't know," I said, "but if we lose Emma in Highland Park we are going to be in a lot of trouble with her parents."

Thankfully she came back and claimed she was fine, although she swore she wasn't going to be eating again for the rest of her trip. Two hours later (after we took her to Chinatown and Olvera Street and bought her every trinket she wanted in the hope she wouldn't tell anyone that we "made" her eat until she puked,) we stopped at Buster's in South Pas and she ate two bowls of green tea ice cream. Oh, to be 9 again.