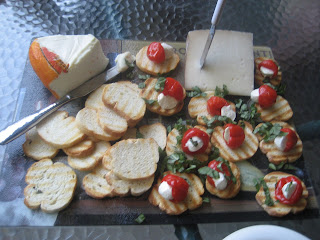 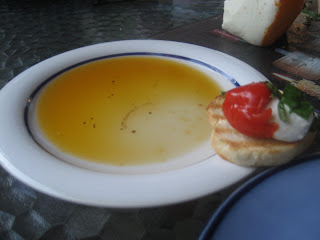 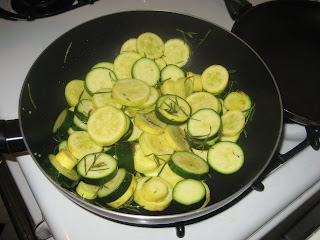 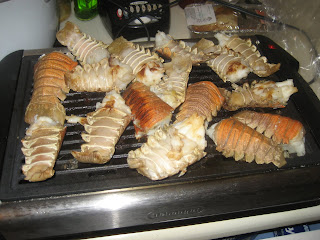 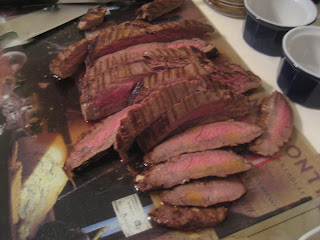 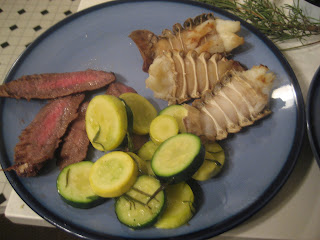 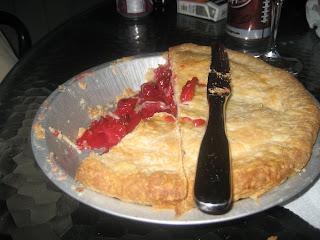 I wanted to cook a dinner for a few friends that showcased my own olive oil. To start with, I put out a spread of crostini (I just cut up a baguette and grilled the slices for a couple minutes on my panini press) with fresh mozzarella, peppadew peppers, and basil on top. I also included some Port Salut (a French cow cheese) and some manchego (a Spanish sheep's milk cheese.) I poured a little of the Sicilian chili oil on a plate, which went perfectly with the softer cheeses.

My friend made the vegetable dish; she sliced some zucchini and cooked it in a wok with lemon oil and some fresh rosemary that I stole that morning from my parents' house (they have perhaps the most fragrant rosemary that I have ever smelled in their backyard.)

I grilled slipper lobster tails (from Fish King) on the indoor grill and made up a sauce of champagne, vanilla and butter. A flank steak had been marinating for a couple days in a mixture of garlic, black pepper, and my mandarin oil. I grilled that to about medium rare then drizzled some extra mandarin oil over it.

There was a salad of lettuce, grilled corn, jicama and croutons, for which I made up a oil and vinegar dressing with my lemon oil. I guess I did not take a picture of it. For dessert we kept things very simple: a cherry pie from Pie 'n Burger.
Posted by JustinM at 1:31 PM

Oh my, that looks and sounds as though it was a mighty fine meal. Surf and turf! Yum...