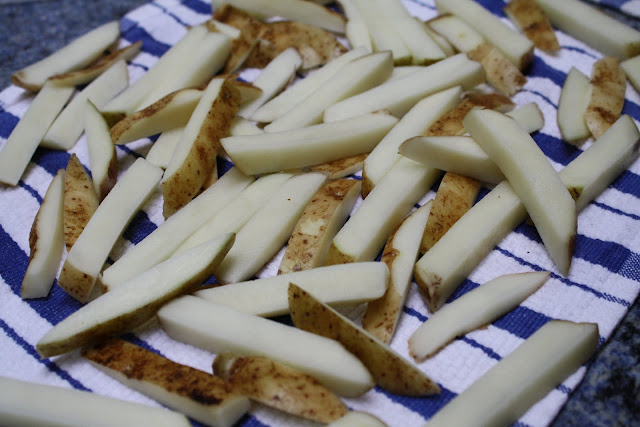 There is no food in the world better than properly-cooked Belgian fries. Not lobster rolls, not charcoal oven-fired pizza, not roasted sweet corn, not carved turkey sandwiches, not even Zankou's chicken tarna wrap which, just the other day, I called my perfect meal. Nope. Belgian fries, when done properly, are as good as it gets.
Making them at home has always been tough for me. I can't explain why. Maybe I try too hard to make them perfect. I don't know. A couple times I have come close to making my ideal fry, but most of the time I make them and remember the fries I've had at Wurstkuche or Pommes Frites and I think Damn, mine aren't as good.
The other day I decided to give them another try, my first attempt in a couple years. I sliced up several small Russet potatoes with a plastic, uniform-slicing gadget that had been buried in a drawer for more than half a decade. I soaked the fries in water for a couple hours, drained them and rinsed them off.
After making sure the potatoes were dry (an important step), I cooked them, a handful at a time, in a pot of oil close to 325 degrees. I didn't time each batch, I simply pulled them out when they looked ready, but I would guess each batch cooked for about six minutes. 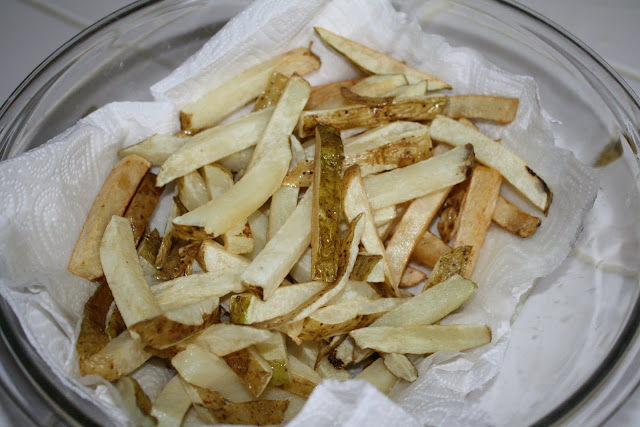 This is what they look like when they come out of the oil the first time: off-white, mostly limp pieces of potato. You can eat them but they taste mostly of slightly-mealy, bland fries.

A hour later I cranked up the heat, closer to 400 degrees, and dropped the potatoes back in for a couple minutes. 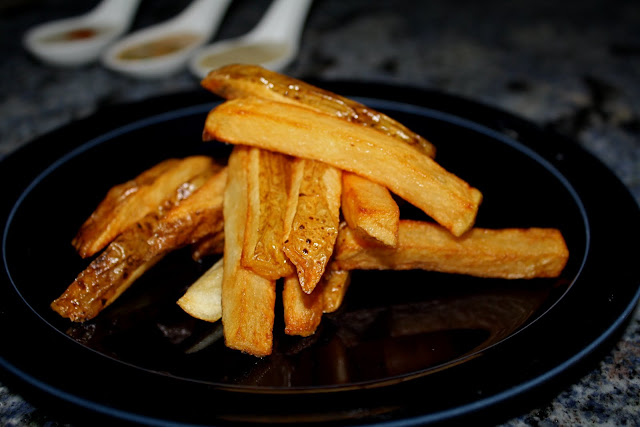 They turn a more golden brown and, if you do it correctly, get crispy on the outside. This, unfortunately, was not my best attempt: only about a quarter of the fries were as crispy as I like them. But those well-done fries were perfect. 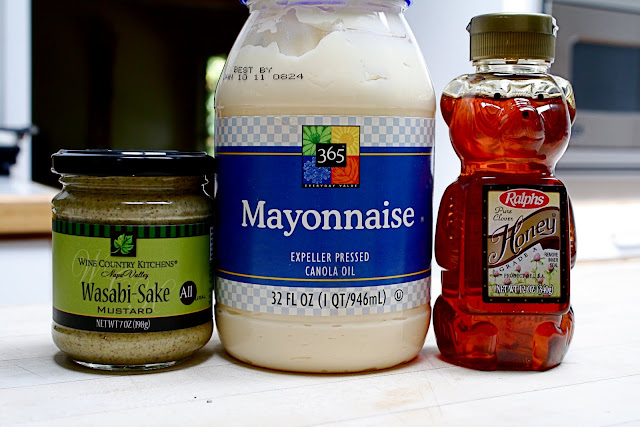 The only thing I like almost as much as eating Belgian fries is preparing sauces for them. I had an idea for a honey mustard: using the wasabi-sake mustard I got a couple weeks back. I didn't measure the portions, I did it mostly to taste, but I imagine my initial mix was roughly 3/5 mayonnaise to 2/5 mustard. I then drizzled in about a tablespoon of honey. 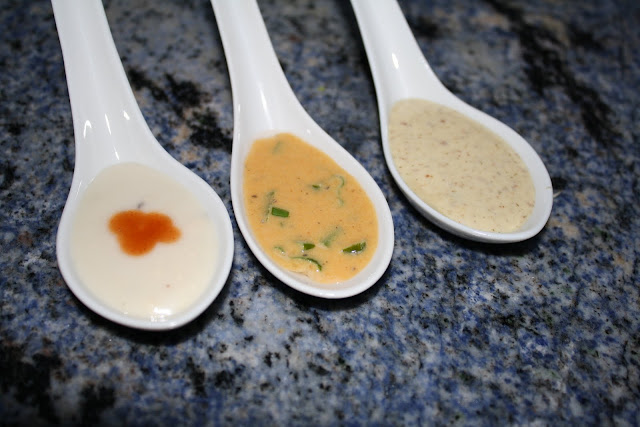 I intended to make a green onion-black pepper mustard sauce, but I screwed it up and ended up making a green onion-mustard barbecue sauce. It was okay but not as good as I was hoping for. I also used a blue cheese sauce, into which I drizzled a touch of Tabasco sauce. But my honey mustard creation was certainly the star of the show. 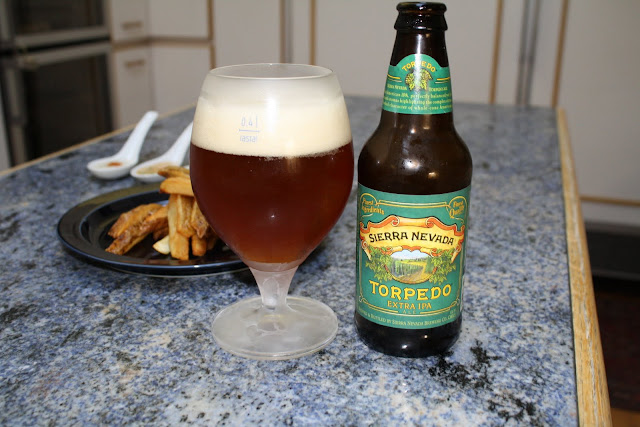 And, of course, nothing goes better with Belgian fries than a cold beer. I wish I liked Belgian beer; it would be nice to open one with these fries, but I can count on one hand the number of Belgian beers I have ever enjoyed. Instead I opted for a Sierra Nevada Torpedo: a super-hoppy, citrus-tinged IPA. It's certainly not my favorite of the Sierra Nevada stable, but then again they don't make a bad beer.
Posted by JustinM at 10:22 AM

Wow, very impressed with your fry making skills. I have never attempted although my Aunt Mary in Greece makes some bomb fries in olive oil....and what's this, you don't like Belgium Beer?! Gasp! Ever tried Piraat?

I've tried them all and almost all of them are too damn sweet. Piraat is certainly one of the lesser offenders, and there are a few that I actually like (Corsendonk Christmas Ale is wonderful) but overall I can't stand the sweet and fruity flavors.

Over the years friends have heard me say this and every so often one of them will say "You should try this, it's not too sweet"... and inevitably it is.

What a delicious looking snack… frosty mug!… and I imagine an oven warmed plate…

I'm with you on the Belgians. I wish I could like them, but the sweetness kills it for me.

Apropos of absolutely nothing, I totally love the word snack, MM.

Belgium has hundreds of different beers. I feel like people have some trappist ales and think they know what Belgian beer tastes like, which leaves them missing out on all kinds of amazing stuff.
There are dark ones, light ones, sweet ones, bitter ones. To generalize about them is ignorant. If you like beer of any kind, chances are there is a similar one from Belgium that is better. I wish I had some Jupiler right now.

"I've tried them all"
HAHAHAHA.
Please educate yourself:
http://www.eupedia.com/belgium/belgian_beers.shtml

If you want to really take fries to the next level, use the double-cook method as you do, but use duck fat instead of oil. You can buy it from restaurant supply places for about $35 for a 5 pound bucket.

Even beyond duck fat is goose fat, which is quite a bit harder to come by.

Anon 1: To assume that I have only tried "some trappist ales" and then formed my opinion is also ignorant. Every heard of Lucky Baldwin's in Pasadena? I have been there thousands of times and tried scores of Belgian beers. Probably more than 100. Sweet, sour, dark, light, many different kinds. With one exception I do not like them.

Anon 2: I was exaggerating when I said I have tried them all. Please don't be a chickenshit and use your real name. I have zero respect for anonymous commenters who show up months after a post originally appears.

Andy Tepper: Thanks for the tip. I have friends who have used goose fat - and one who claims to have used horse fat - but I never have.

Sorry for posting so late, but I've got a tip for you to make the fries just a bit better! Leave the potatoes in the oil during the blanching process for a few minutes longer, until they are a light golden colour. Carry on how you usually do and I guarantee you will end up with fries that stay crisp for much longer :)

Hi Medm. Constructive criticism is always welcome, no matter how late. (And actual criticism is fine, too, when people actually bother to write their name. The above anon comments are pretty tame - especially since he or she doesn't know me and doesn't know just how many Belgian beers I have tried - but you have no idea how many anonymous comments I get months, sometimes years after the fact, calling me an "idiot" or "asshole." Those people are just lame, the kind of people whom you know would never say that kind of thing to your face.)

Thanks for the tip. I've read some recipes who say to leave the fries in the blanching oil much longer than I did. I figured the bulk of the recipes say to do it for a shorter time so they must be right, but maybe they're not and you are. At any rate it can't hurt to heed your advice at least once, because 75% of the time I am not happy with my results.

I also think I didn't have the oil high enough for the second frying. I will try again one day soon with your advice.