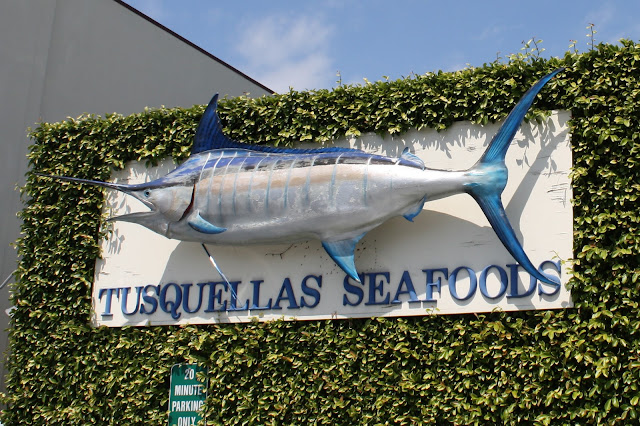 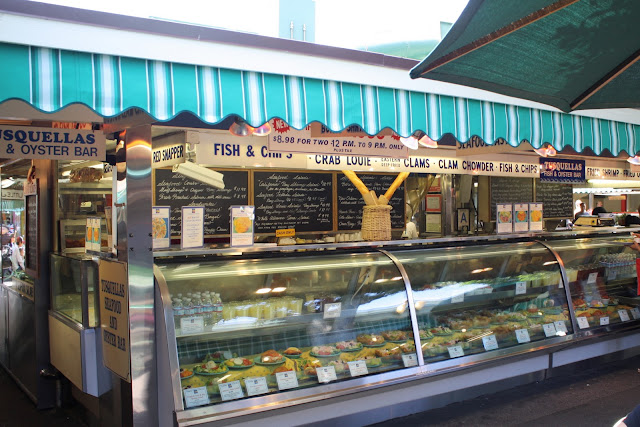 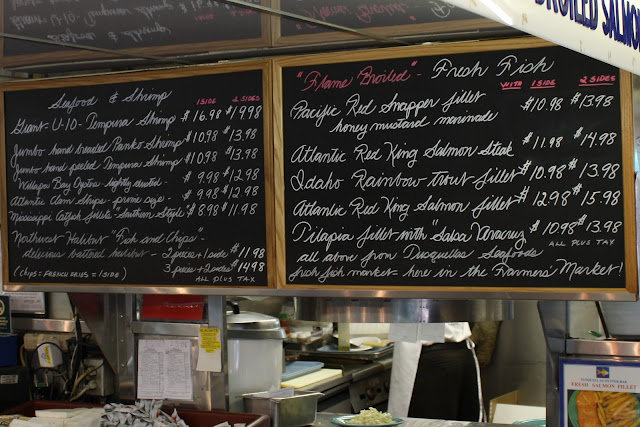 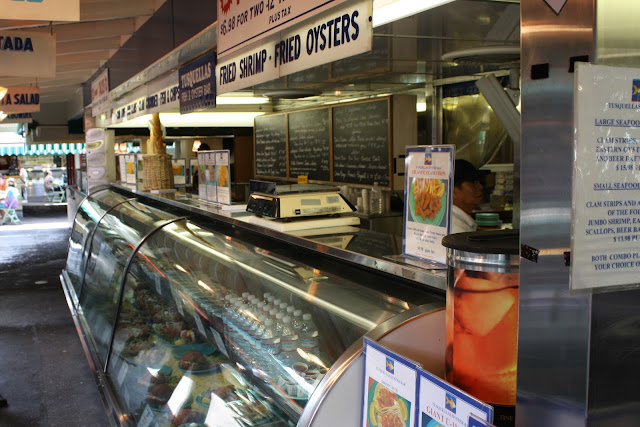 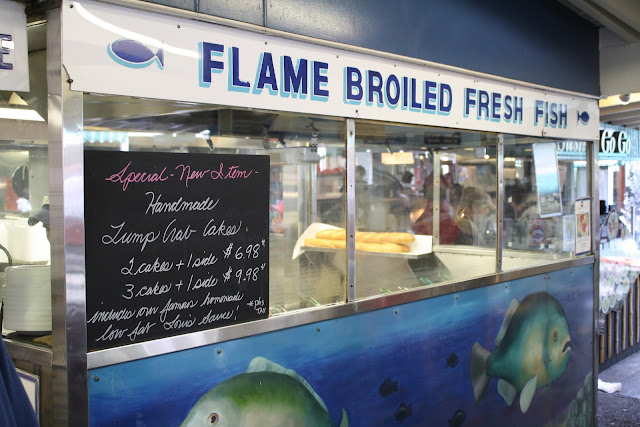 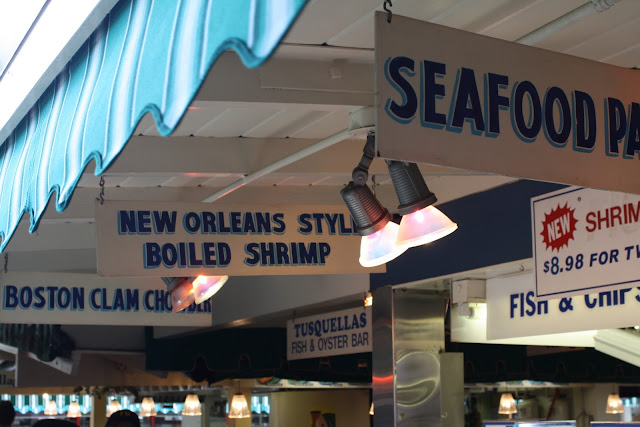 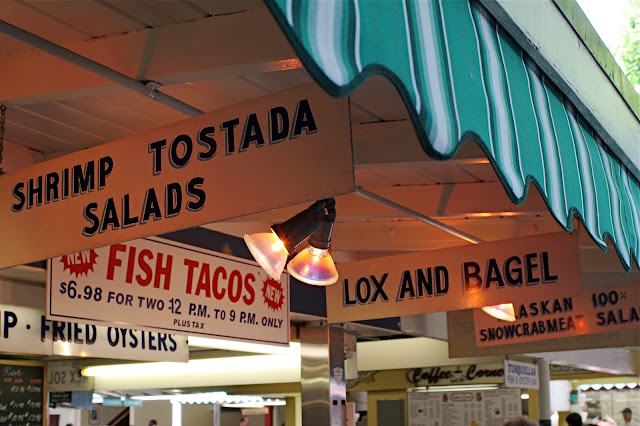 A few years back, I lived three miles from the L.A. Farmers Market and my brother and I would often eat lunch there together. Sometimes we were seeing a movie at The Grove, but really there was a more simple reason for our dining destination: with dozens of food options, we never had to disagree or argue about what to get. If he wanted Japanese food and I wanted a sandwich, no problem. If he wanted pizza and I wanted to drink beer and eat candy, easily done.

But our most common routine was that he would get Mediterranean food from Moishe's and I would get shrimp from Tusquellas, both right next to each other, and we would sit at one of the round tables in the courtyard and eat. I've been to the Farmers Market a few times in the years since then, even writing about The Gumbo Pot last fall, but I had not eaten at Tusquellas in more than eight years.

On Sunday, my favorite blogger was looking for a particular beauty product so we went over to the Grove. It was overcast and cool when we left Pasadena; half an hour later in Mid-City it was 80 degrees and sunny. Perfect for grabbing lunch at the Farmers Market. We walked through the whole thing, seeing if anything called out to us. We both decided seafood sounded good. 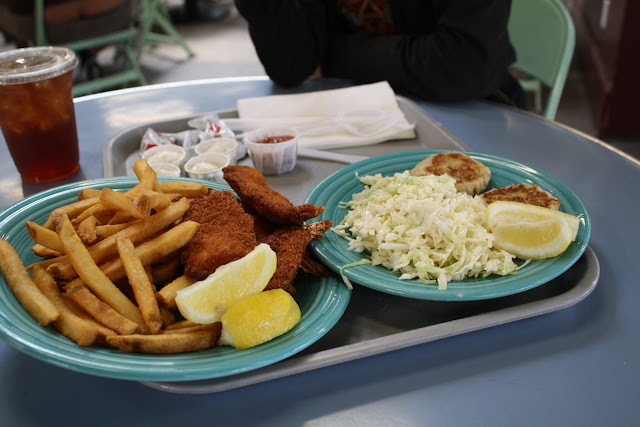 We got two plates and decided to share: panko-breaded fried shrimp (with fries) and two crab cakes with cole slaw. The food was ready in about five minutes; I stood around and waited for it while she secured us a table. 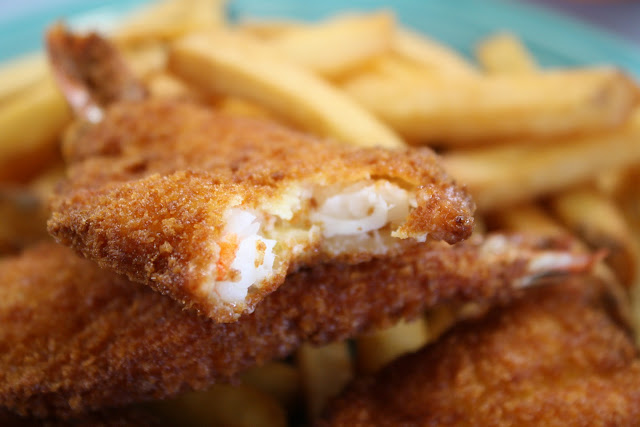 The shrimp were delicious: pink, tender jumbo shrimp full of flavor. We both really liked them. Were they overly-breaded? Definitely. There was a lot of crunch in each bite and I wished there had been less. But they weren't too oily and the breading was fresh, so it was a small complaint. 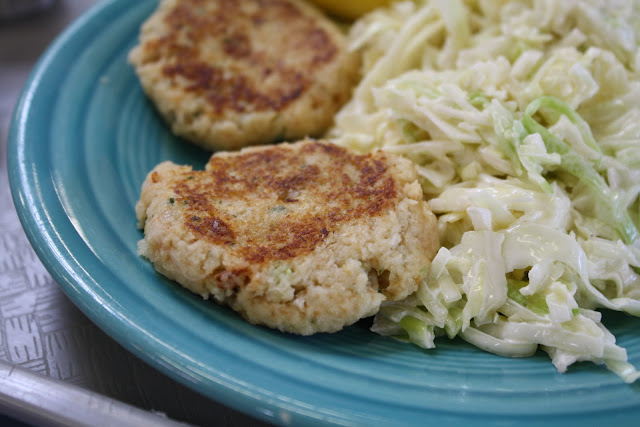 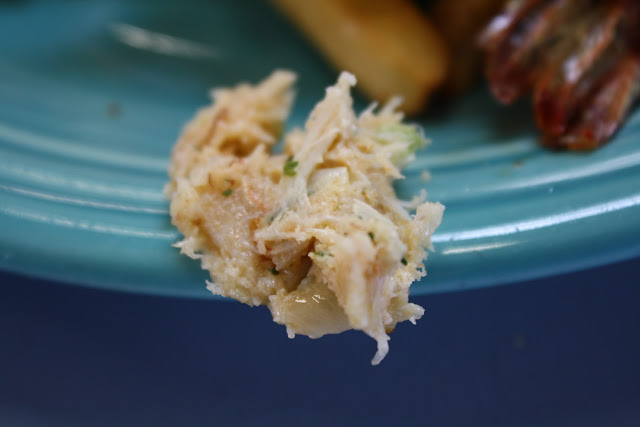 Unlike the shrimp, the crab cakes were not overly-breaded or full of filler, they were mostly crab. But I wasn't a big fan - the crab tasted bland and a little too watery. My dining companion liked these much more than I did.

The cole slaw was outstanding, though. It was creamy but not too sweet or soggy, just a coating of dressing to hold it together. It was the best cole slaw I have had in months. 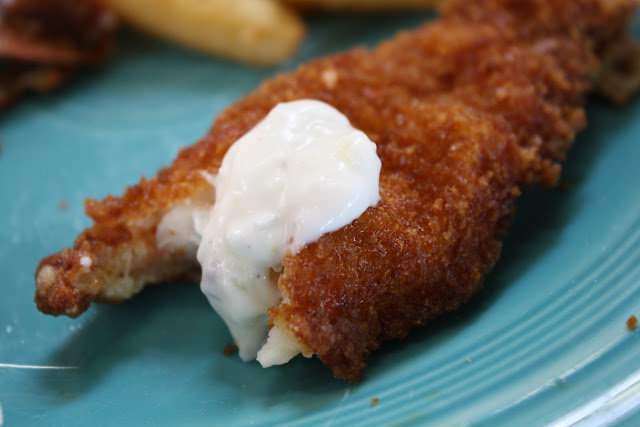 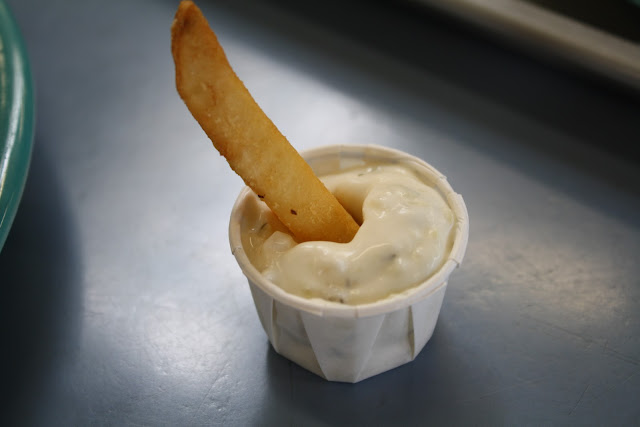 The tartar sauce was fantastic. It reminded me of The Crab Cooker's tartar sauce, which is probably my favorite I have ever had. I prefer cocktail sauce with fried shrimp, but I had no problem using using this tartar sauce with both the shrimp and the fries.

It was fun to eat at Tusquellas again, but I don't feel any big need to make an effort to return. Our two plates, together with iced teas, cost $21, a reasonable amount for two freshly cooked seafood lunches. But lots of Tusquellas entrees are much more expensive than I remember, some creeping up towards twenty dollars each. This meal was worth what we paid for it, but those $15-$20 entrees would have to be a lot better than what we had to justify the cost.

I would certainly be willing to return to Tusquellas, but should I ever get back in the habit of making the Farmers Market a usual dining destination (which isn't likely), I think The Gumbo Pot or Loteria Grill will be my go-to place.
Posted by JustinM at 11:00 AM

Okay, next time I won't give you crabs.