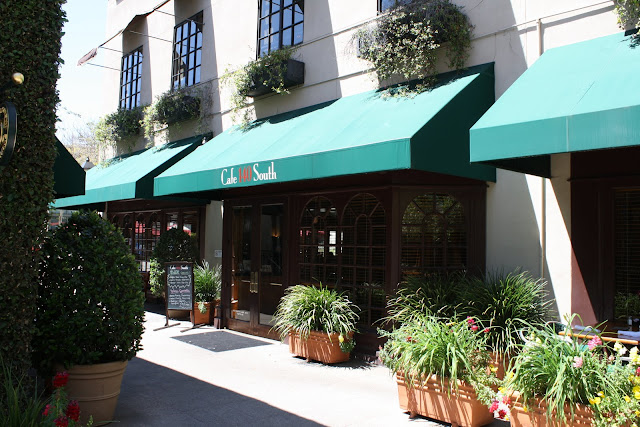 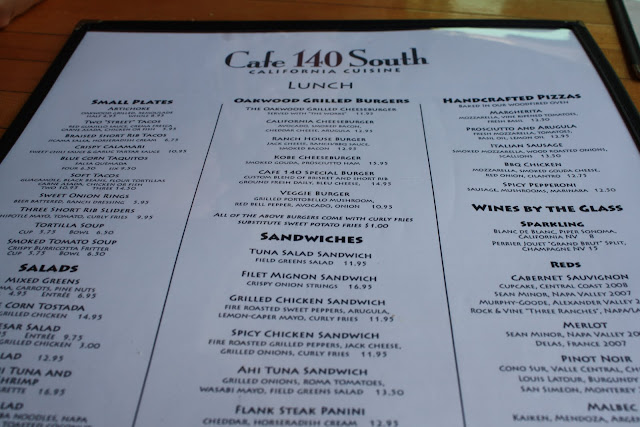 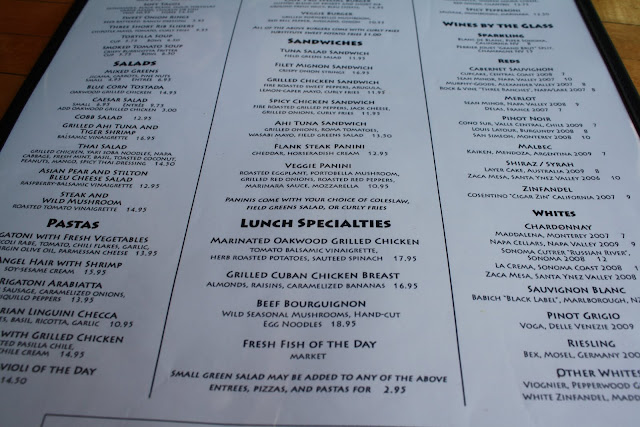 For the better part of two decades, I ate at Crocodile Cafe several times per year. When I was a kid it was one of my favorite places in town to eat, if not my favorite. Where else could I get a three-section pizza and a giant plate of curly fries?

As a teenager it was a great place to go on dates: their potstickers with lime-cilantro sauce were just different enough to be mysterious to a 17 year-old. "I prefer to eat these with chopsticks," I once showed off to a girl, unaware that she had lived in Japan for a year. The date ended at 8:30 on a Friday night, I believe, though that was just fine by me because it meant I could be home in time to watch Homicide: Life on the Street.

I didn't really date a lot in high school.

As an adult I often met a friend of mine for lunch at Crocodile; she worked just across the street on Lake Ave. She was a vegetarian so she never wanted to share potstickers. We always ended up with a plate of onion rings, but that was just fine by me, too. But then she got pregnant, stopped working on Lake, and our lunch dates ended. I ran into her just the other day.

"Justin stopped taking me to lunch once I got knocked up," she explained to Elizabeth.

A while back, Crocodile renamed itself Cafe 140 South and streamlined the menu. My old favorites are still there, along with a few new items.

My brother and I stopped by for lunch a few days ago. I had suggested a couple of other places but he wanted to try Cafe 140. I agreed as long as we could sit outside. (The inside of Crocodile used to get deafeningly loud at lunchtime; once I had lunch there with Elizabeth and our friend Clare and we all had to yell at each other.)

The sunken patio next to Lake Ave was full. Apparently other people were on to this whole hey-let's-eat-outdoors-on-an-85-degree-day idea. But we were offered a table at a small patio off to the side of the restaurant, which ended up being even better. 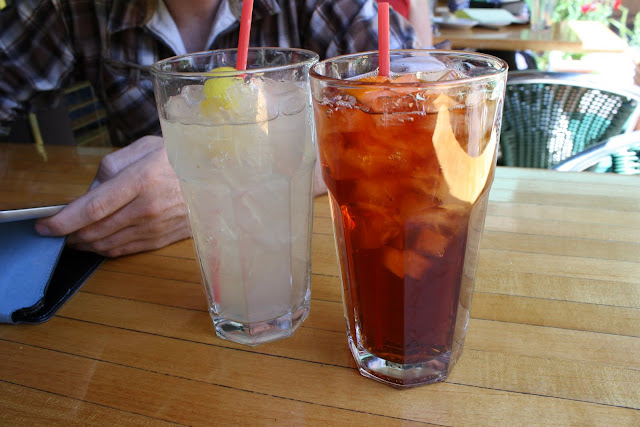 It was a hot day and the idea of drinking anything but iced tea was not appealing to me. 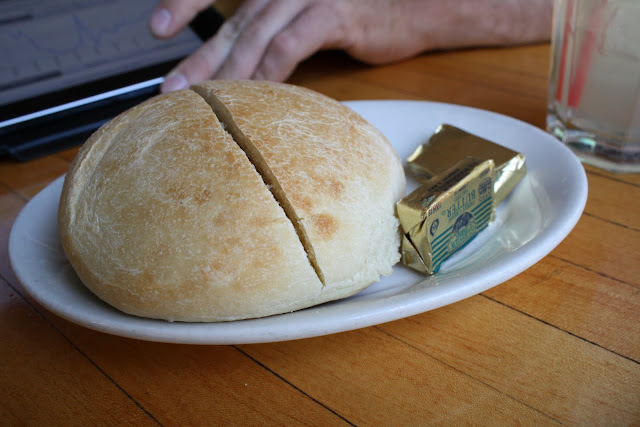 I tried a piece of the bread because I was quite hungry, but I did not enjoy it. 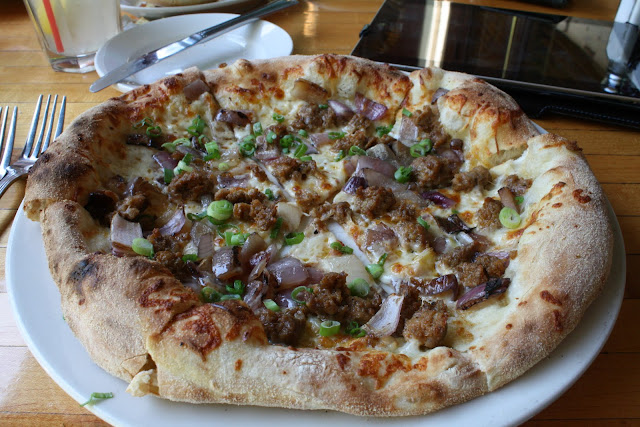 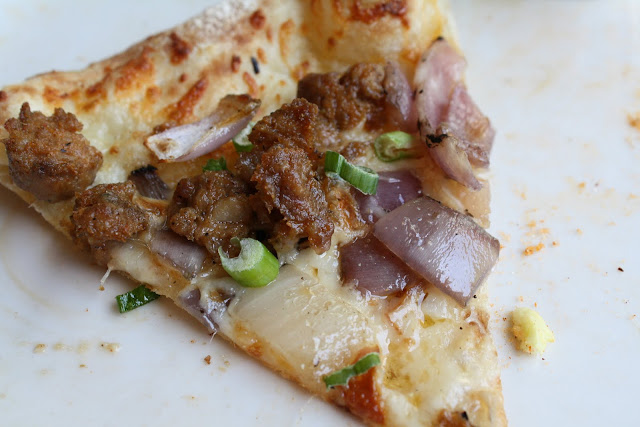 The other day I considered getting a pizza, but I wasn't really in the mood. My brother was, however, and ordered the Italian sausage pizza. (And a plate of fries.) He liked the pizza - he ate all of it but the one bite he gave me - but he was not a huge fan of the olive oil sauce. I didn't have a problem with it, and I especially enjoyed the onions and scallions, but I certainly think a red sauce goes better with sausage on pizza. 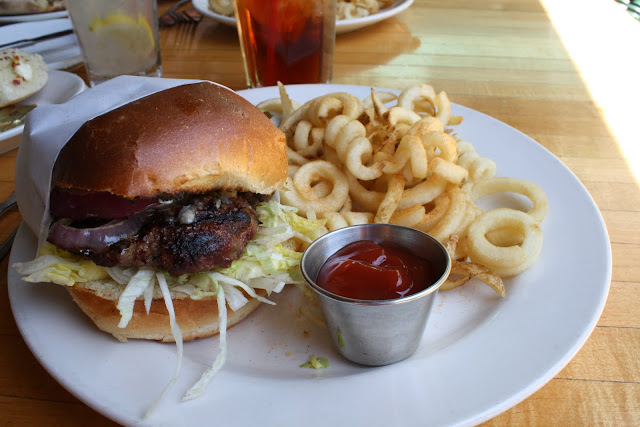 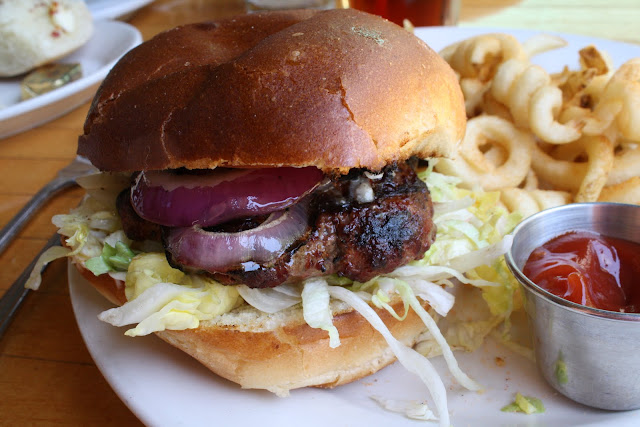 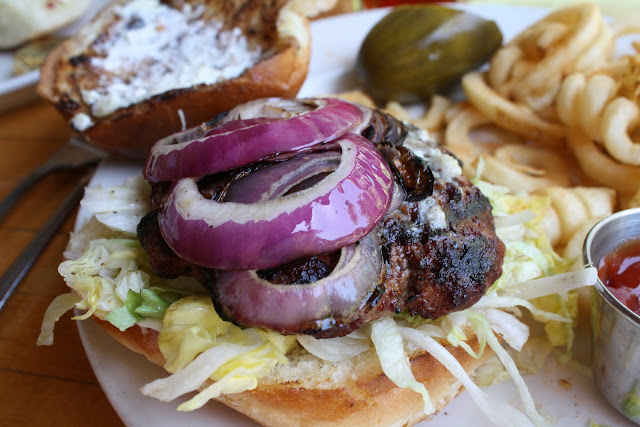 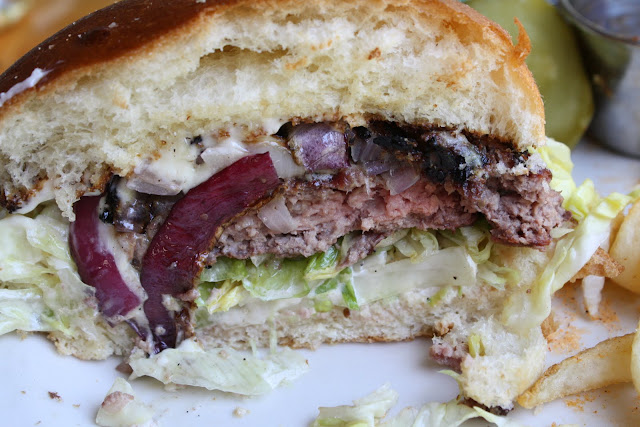 I was considering the short rib sliders or the Kobe burger. I assume the latter is the same as the one they served at Crocodile, which was one of my favorite burgers in Pasadena. Then my eye caught the "Cafe 140 Special Burger" - a blend of brisket and short rib, ground fresh daily, on a bun with blue cheese. I inquired about it; the server assured me it was great.

I requested it medium-rare. When it arrived and I cut it in half I saw that half of the patty was slightly-pink; the other half was gray throughout. I've ordered enough restaurant burgers in my life to know that requesting a burger medium-rare is a crapshoot. Maybe one-quarter of the time I get them done properly. Most of the time they're done however the cook feels like. It is what it is. (This is why, when I want a great burger, I cook it for myself at home 90% of the time these days.)

But a burger that is not cooked as I requested - and as I pointed out, this one was half-right, which is better than most places - is not a big deal as long as it tastes good. And this one did indeed taste good. Not great by any means, and certainly not worthy of the $14.95 price tag (the Kobe burger is only one dollar more and much better) but a tasty restaurant burger.

The blue cheese was overpowering. I love blue cheese, so it did not bother me too much, but if you only like blue cheese in small doses, this is not the burger for you. 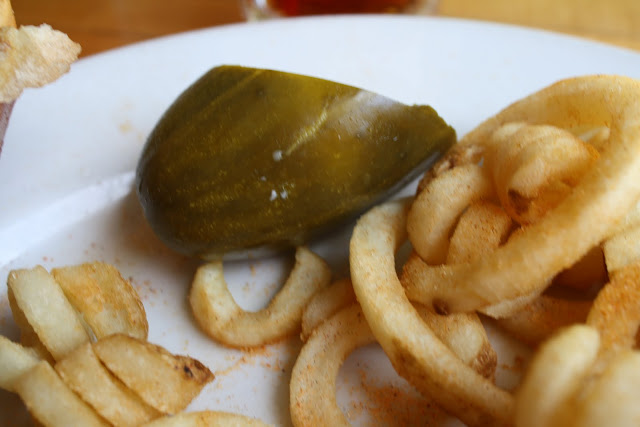 The burger was accompanied by a giant hunk of dill pickle. Which is always a good thing. 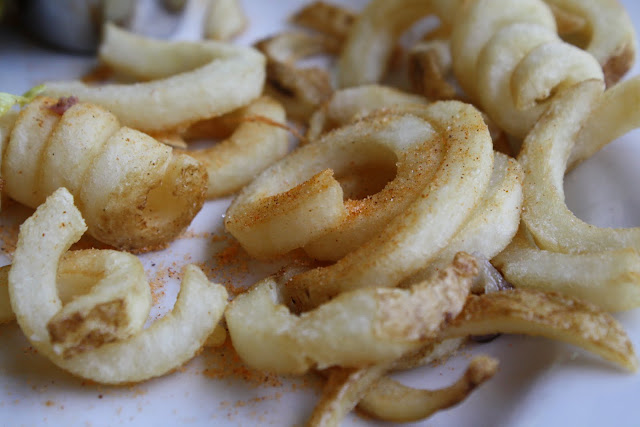 I have always enjoyed the curly fries in this location; they have always been nicely spiced without being terribly salty, but at this lunch only half of them were good. The other half were undercooked. I asked my brother what he thought about his plate of fries.
"It seems like half of them are great and half of them suck."
Well, okay.
Was it a nice lunch at Cafe 140 South? Sure. Was it a great lunch? Not by any means. Will I return? I don't think so, at least not of my own choosing. It's a Smith Brothers restaurant, and anyone who has dined in Pasadena for decades knows exactly what that means: good food, prices that make you think it should be better-than-good food, friendly service, and a genuinely overall-pleasant experience that still leaves you thinking: Is that all there is?
This is another one of those places in Pasadena that used to mean a lot to me and just doesn't anymore. It happens. There are still many places where I considered a $50 tab for two people to be worth it at lunchtime. This is not one of them.
Posted by JustinM at 8:36 AM

They offer a mid-week special of "A Burger and a Beer" (with fries) for $15.00 which is a relatively good deal. It's their basic cheeseburger, which is quite good.
I don't remember on which day it is that this is available, however, and their web site doesn't mention it.
I'm also a fan of the Blue Corn Tostada Salad which is the same dish that Hugo Molina created in the early days at Parkway Grill. The price for this has eeked up to 15 bucks over the years, so I've relegated it to "guilty pleasure" status.

I loved this post, great for a Friday morning.

What are your favorite places in Pasadena where you might spend $50 for two people for a lunch without alcohol? That seems like a fair amount if you really like the place but waaay too high if the place is just average.