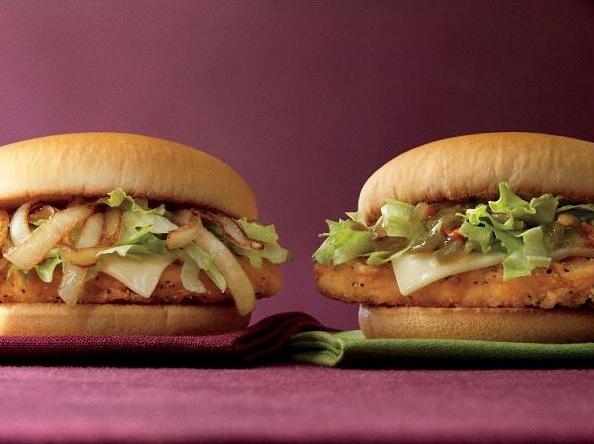 Elizabeth and I were in bed last night, doing our favorite thing in the world.

It was the Dodgers at the Giants, and in the background an advertisement caught my eye, in unmistakable McDonald's font and colors, reading: "Cheddar Onion McChicken."

What is that?!! I thought to myself. That sounds good. So I went to McDonald's. Sure enough, there was an ad for two new McChicken sandwiches, both priced at $1.49 - the Cheddar Onion and a Jalapeño Cheddar. I ordered one of each. 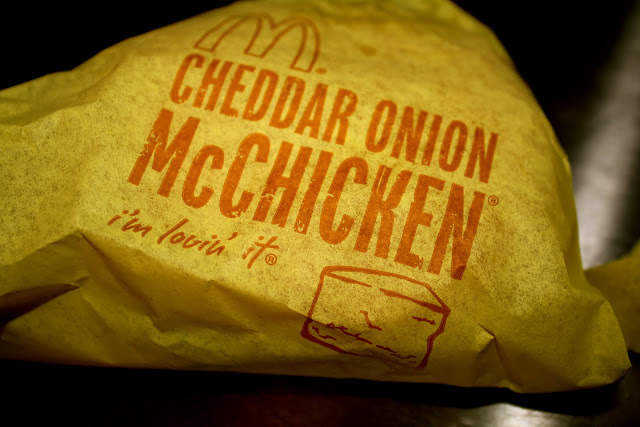 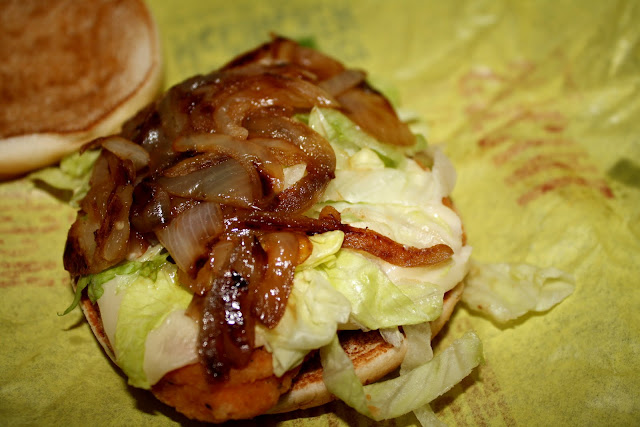 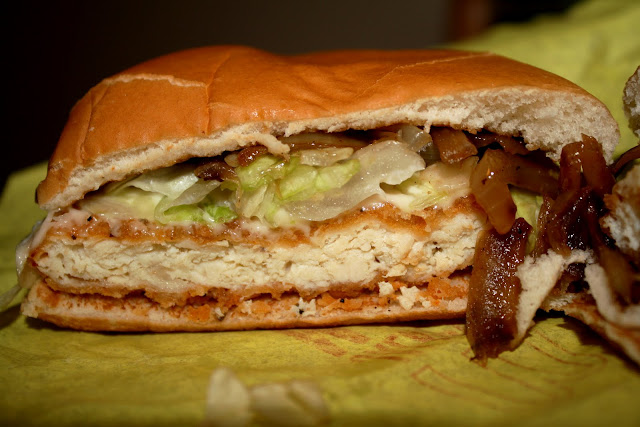 The Cheddar Onion sandwich was good, although the onions were by far the dominant flavor. Not that that's a bad thing - caramelized onions are one of my favorite flavors - but I could not taste any cheese. The onions were much more caramelized than the ad makes them appear, but no big deal. The extra 30 cents (actually I don't remember exactly what the McChicken costs at my local McDonald's, but I think it's $1.19) is well worth it: the sandwich is no longer bland. 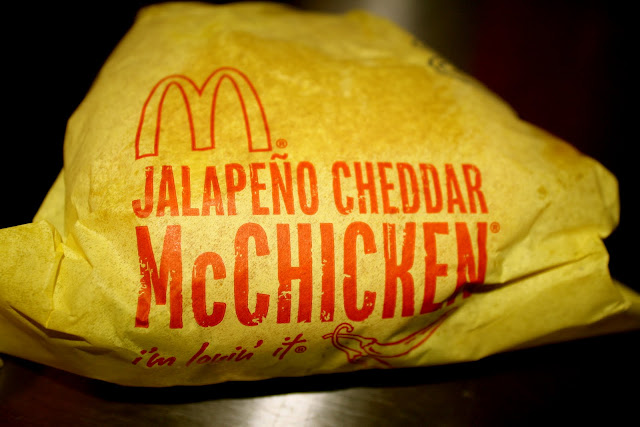 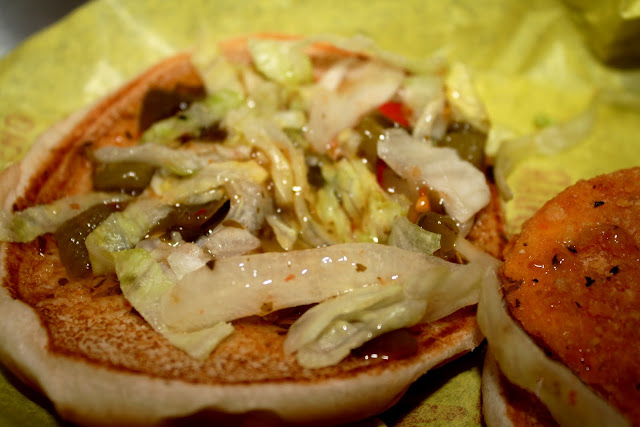 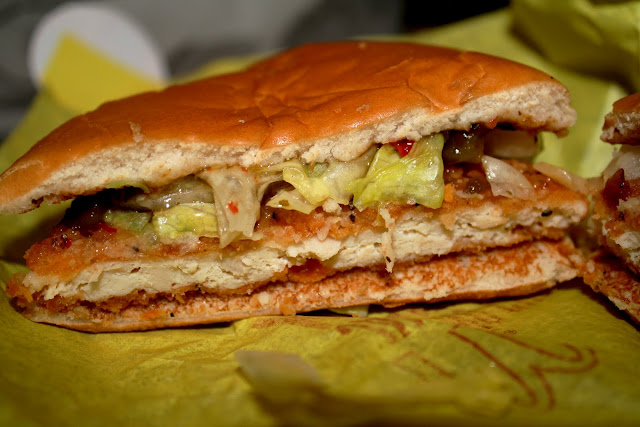 The Jalapeño Cheddar version was my favorite of the two, however: the jalapeños were delicious - spicy and flavorful. I did not taste more than a hint of cheese on this sandwich, but I didn't mind, because I enjoyed the jalapeños so much.

I read a few things online about this sandwich, including a rumor that you can order these jalapeños on any sandwich McDonald's serves. I would not mind trying their Southern Style Chicken Sandwich - which I actually enjoy - in that manner. That sounds pretty damn good. 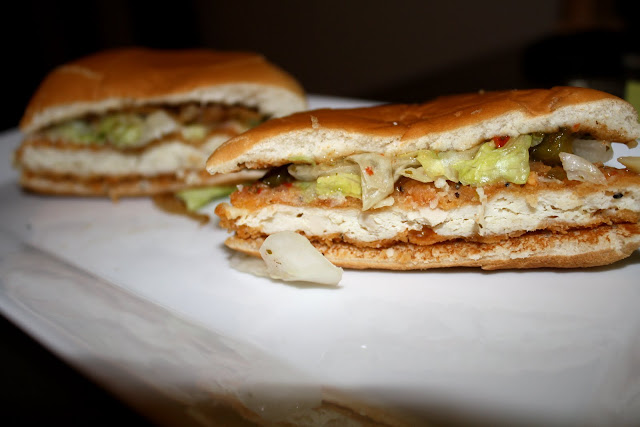 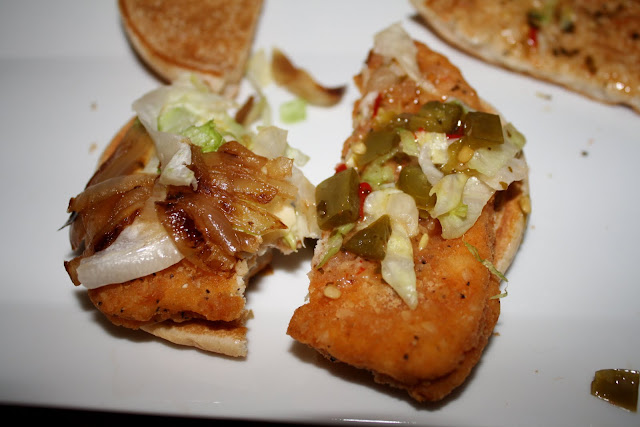 I gave Elizabeth a bite of each sandwich. She agreed that the onion sandwich was good, and she really liked the jalapeno version, even asking if she could have another bite.

Look, this isn't gourmet stuff. And it's not even better than the fast casual stuff that I like: a Zankou Chicken tarna wrap or a Philly's Best cheesesteak is much better. But they're only $1.49. They make a good snack, and I would certainly would take either over any of McDonald's burgers.
Posted by JustinM at 9:49 AM

Dude this looks legit, although I wish we could get out of the cheddar and jalapeno thing in America. I look at some of the European chicken sandwiches McDonald's has, and I get jealous. It seems like the only flavor Americans are comfortable with is hot and fake cheesy. This is the first time I've ever even heard of this sandwich. Must be just a regional things, like the chicken flatbread wraps in Baltimore.

Michelle: Yeah, no kidding. Can't wait for the gouda and smoked bacon chicken sandwiches they're coming out with next. (Only kidding.)

Adam: Hot and fake cheesy was actually my nickname in high school. Seriously, though, I agree with you 100% about the European sandwiches looking better. As someone who once actually went to a McDonald's in Italy, I can tell you that they didn't have anything fancy back then, though (15 years ago).

I think these might be going national soon, but I have no confirmation of that, just something I read somewhere and I can't remember where.

Is this only available in SOCAL?

had it yesterday in houston!!! the jalapano one is def worth it but next time gotta make sure to get the mayo on it!! def worth trying people!

I was really disappointed by the heat of the the Jalapeno Cheddar version. Have you ever tried the Hot N Spicy Chicken sandwich? I think that one was actually more spicy although it's been a long time since I've eaten one so I can't be sure.

the smoked bacon would be good on the onion ckicken

Do you know if these sandwiches will be available in canada anytime soon? I can not find any info Online anywhere.

I tried the Jalapeno cheddar in SoCal today, and I must say it was absolutely horrible. I'm a conneseuire of all things jalapeno - even jalapeno jelly - but these things barely have any flavor that resembles jalapeno!

What I bit into was a soggy mess of sourness. I couldn't taste chicken, cheese, jalapeno, or hell even he bun, just the vinegar from the jalapeno topping. It was like someone smothered the sandwich in 1000 pickle slices.