My brother was just in the Big Apple for the release party for a book in which a chapter features him. The book is called "Guys With The Best Big Brothers In America." Actually, that's not true, I just made that up. It's a book about people who have created their dream jobs. I would explain what his job is but to be honest I'm not entirely sure; it seems to involve traveling the world, creating challenges for reality TV shows and eating amazing meals.

I've told friends for years that they are welcome to do guest posts if they send me vacation photos of their food, but so far only one person has: my friend Mick, who did a write-up on Plaice & Chips in England a couple years ago.

Here are some photos from my brother's trip to New York and his notes on what he ate: 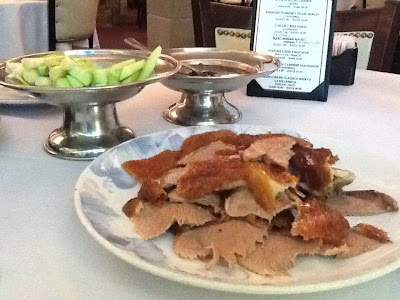 Peking duck from the Peking Duck House in Chinatown. All the waiters wear tuxes, the head chef comes out and carves the duck tableside. For two people the duck is $50 - including duck and accroutrements. They do not let you assemble the duck plates yourself, the waiters hover and assemble the plates for you. It was fantastic, the best meal I had in New York. 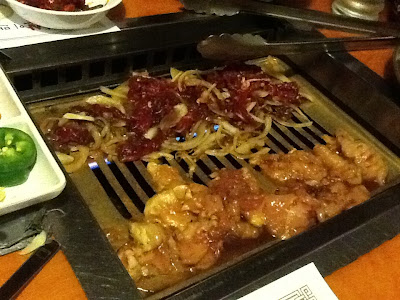 Bulgogi and chicken gui from Kum Gang San in Koreatown (Midtown West). This was unexpected; when we ordered it they brought out 11 side dishes not indicated on the menu. They were all disgusting. They dump it all out on the grill for you and move the meat around for you because they are trying to move customers in and out as fast as possible. That defeats the whole purpose of Korean barbecue. They might as well cook the meat for you in the back. It's a rip off, $100 for two people, and any additional meat would have been $30 more. Any joint I have ever been to in K-Town in Los Angeles is much, much better. 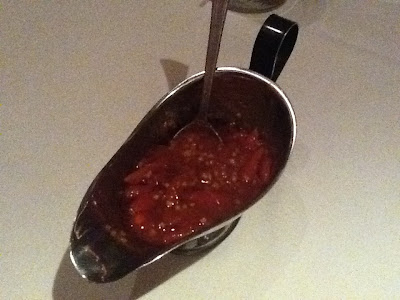 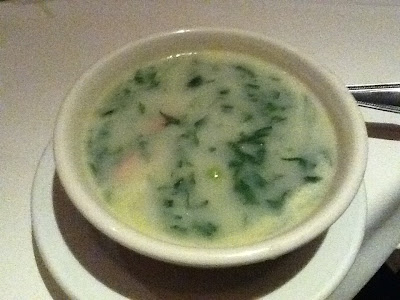 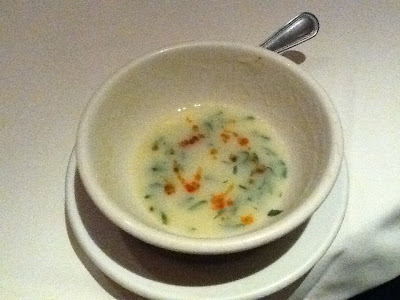 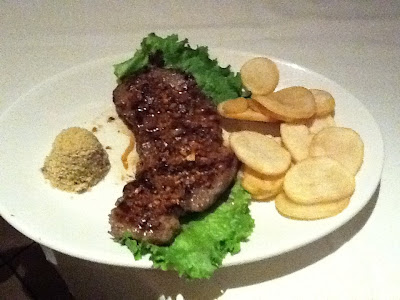 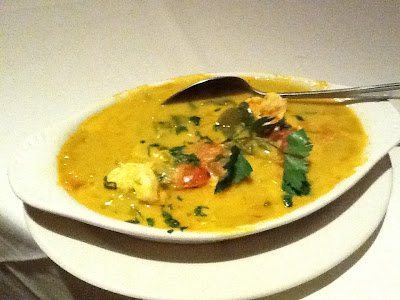 Ipanema. My friend Nick speaks Portugese so he was able to converse with the waiter, who was from a town one away from where Nick spent a couple years, and the waiter brought out his personal hot sauce, something he created himself and described as "insanely hot." And it was. Just a few drops of the hot sauce on my soup was enough to set my mouth on fire.
The meat is a garlic-covered steak that was expertly cooked, the yellow dish is something that I cannot pronounce, a seafood stew that is next to impossible to find outside of Brazil. Nick asked for it by name - it was his favorite dish in Brazil - and the waiter scrounged some up from the kitchen, from a special supply that is kept on hand for Brazilians. 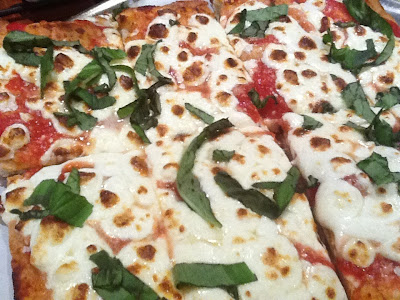 This pizza is crappy, from a chain restaurant called Cosi Sandwich Bar. It was right across from our hotel so I decided to try it one morning.This is the worst slice of pizza I've ever had in New York. 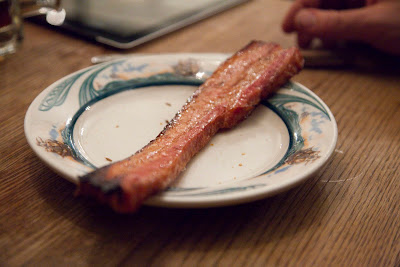 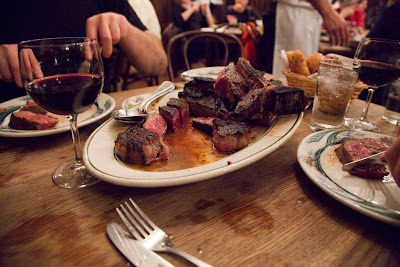 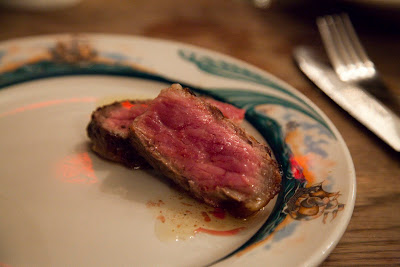 [Justin's note: I told my brother that if he was going to Peter Luger, the world-famous steakhouse that is often featured on Food Network and Travel Channel, to please stop taking photos with his crappy iPad camera and take some higher quality pictures.]
We knew were getting close to Peter Luger Steak House when we saw the huge crowds gathered outside. Inside was a madhouse. We told them we had a reservation which seemed pointless, as we then had to wait a half-hour. There is no beer on tap other than Peter Luger's own beer. I asked for a Guinness but couldn't get one. There are basically only two things on the menu: steak or more steak. (You order steak for two, steak for four, etc...)
On the appetizer menu you can order bacon by the slice. We ordered four. It was tasty but a bit bizarre to eat bacon by itself as an appetizer. On every table is a jar of Peter Luger's "special sauce," basically a cocktail sauce without horseradish. I did not like it.
The steak arrives on a sizzling hot plate, pre-cut into several slices. The waiter uses spoons to serve each slice, saucing it for you and serving it a shade less well-done than ordered (we ordered medium) because it will continue to cook on the blisteringly-hot plate. This steak was ordered for three people (it cost around $120) but could certainly have served four. They don't skimp on the portions.
I ate one piece of steak by adding butter and bacon to it. It was amazing. The perfect way to end my final meal in New York.
Posted by JustinM at 9:59 AM

What a bummer that the Korean meal wasn't good! Next time, head to Don's Bogam - it isn't cheap but it IS incredible! Also-pictures of steak do it for me every time. Seriously...there can never be enough steak pictures

no action shots? oh come on! youre PP's brother!