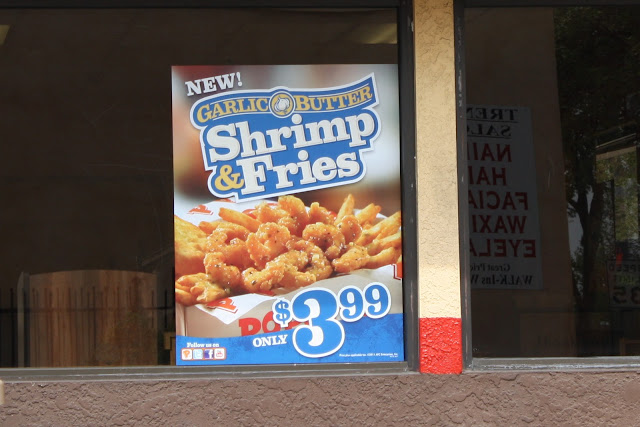 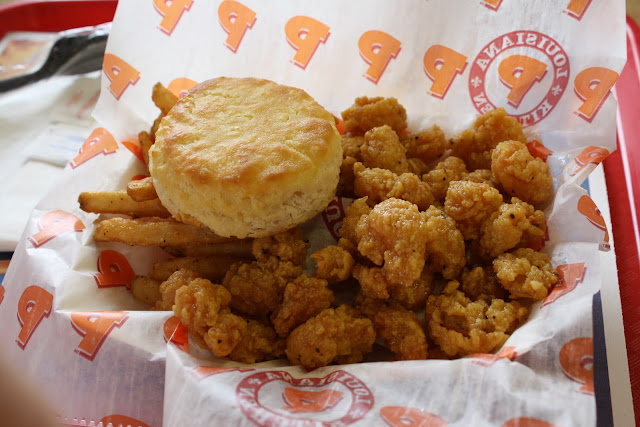 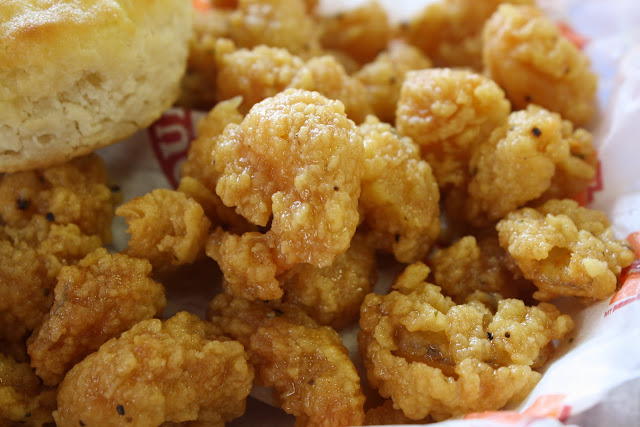 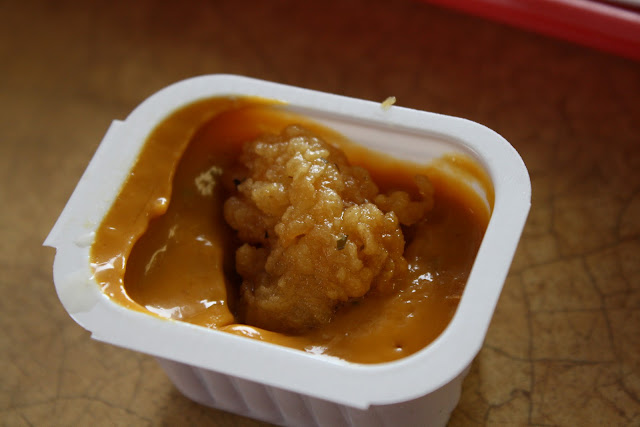 There are plenty of seafood options at the moment at fast food and fast casual restaurants. I'm not going to try them all - my Fast Food AdLentures last year was not as much fun as I thought it was going to be; too many of the fish sandwiches were lousy. But there are definitely some that I will eat every year, like the Del Taco fish tacos, as well as others I tried simply because people wanted me to, like Wendy's fish sandwich.

When I saw a Popeyes commercial for a new product called "Garlic Butter Shrimp," there was no question I would be trying it. I almost always enjoy Popeyes promotions, not to mention garlic is perhaps my favorite flavor in the world. (Beer doesn't count as a flavor, does it?)

Plus, with the word "butter" in the title, I knew a certain pretty girl who would be glad to try them with me. We headed up to the Popeyes on Lake Ave in Pasadena, which is certainly not my favorite Popeyes in the area but one at which I had seen a sign advertising the special a couple days earlier. (Popeyes, more than any chain I have ever seen, varies tremendously from store to store in terms of who carries new promotions. Some stores have them, some don't, and often some stores have never even heard of the new items.)

The shrimp and fries is $3.99 by itself, although I opted to get a drink with it to raise the price to $4.99. They were ready in less then three minutes. But then again, we were the only two people in the place.

The garlic butter was a very nice flavor. I was worried it would taste like fake butter, that movie-theater-popcorn-tasting sludge that leaves a film on your fingers for a day and coats the insides of your mouth for even longer. But this tasted like actual butter. The garlic flavor could have been stronger and I would not have minded, but take that with a grain of salt: I always want more garlic flavor.

Unfortunately, the shrimp were lousy. There were only a few meaty pieces, most of them were tiny little things tasting only of breading. And they were all overcooked. I'm sure I would have liked this a lot if the shrimp had been good. But they just weren't.

I asked for some "Delta" sauce to hide the flavor of the overcooked shrimp but the girl told me they don't have it anymore - I assume she meant they were out, not that Popeyes is done carrying it - so I got a packet of spicy honey mustard, which is also quite tasty. I've said it before: Popeyes has my favorite condiments of any fast food chain - Delta sauce, spicy honey mustard, horseradish sauce, cocktail sauce, it's all very good.

The Pasadena Popeyes is definitely my least favorite of any location in the San Gabriel Valley because their food is consistently lower-quality than the other locations. So, depending how long this promotion lasts, it's possible I may try it again somewhere else. But I probably won't.
Posted by JustinM at 11:18 AM

The former Popeye's on Main & Fremont in Alhambra is a really funny one. It was "de-flagged" as a Popeye's, maybe 7-8 years ago and the owner kept putting variations on the Popeye's sign back up, calling it "Popeye Jr.", "Popeye", etc. Each variation would last a few months as the Corporate people would make him take them down. It was pretty comical to watch, although nothing new, sign wise, has gone up in well over a year.

Stephen, I've been to that one twice: Elizabeth and I had lunch there two and a half years ago and the owner came out from behind the counter and talked to us the entire time we were eating. It was like we had just stumbled across a hermit in the desert who hadn't had visitors in years and was relishing the chance to talk again. In my memory he followed us outside and waved to us as we drove away on Fremont, although I admit this probably didn't happen. But I would not be surprised if he still thinks about us from time to time.

The second time was last year when I went in to see if they had the crawfish and the girl behind the counter grunted a single word: "No." I asked if they would be getting them and she again grunted "No." I said "Well, thank you for your time" and walked out.

So I don't even count that as a Popeyes.

Ah, too bad about the shrimp part but at least the butter flava flav was there. Popeyes in the one fastfood place I've been dying to go but have never been!

Funny, I had these yesterday, along with my twin brother, and after I finished I wondered if you had tried em. Lo and behold...

Mine came out piping hot, fresh out the grease I suppose. Lucky for me. And cooked perfectly. Shrimp weren't the biggest but it was still an awesome meal, and my brother agreed.

The Popeye's by my house is one of the best I've ever been to(besides the ones in New Orleans) so they usually don't disappoint. Sorry to hear you were a little disappointed as I loved this meal. Didn't even need sauce but I probably will ask for some next time.

I'm glad you had good shrimp. There are a couple Popeyes I know of that are always good, they're just farther away than the one in Pasadena. So I took a chance on the closer one. And I got burned.

I went to the Popeyes on Canal Street in New Orleans once, just because I could. It was great.

I'm getting ready to leave my house, venturing to a Popeye's here in Destrehan, Louisiana. They've always been a little sub par in my opinion, but every now and then they don't disappoint. If they remember to give you your drink, it's great. If they remember to actually put food in your box, it's even better. Fingers crossed.

Yes, the shrimp I had were small and mostly overcooked. But that is the exception at Popeyes rather than the rule in my experience.