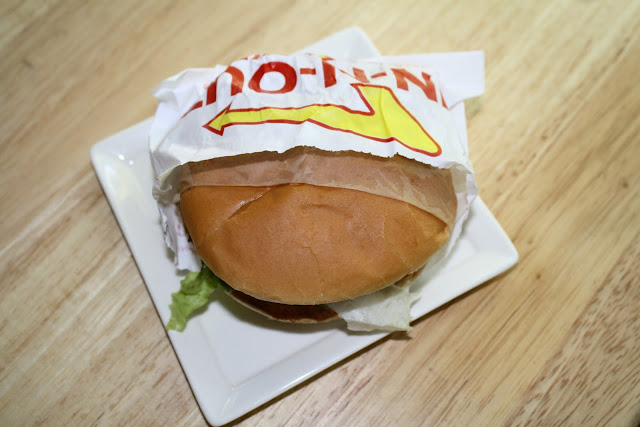 I was watching the NCAA championship game Monday night when Elizabeth got home from work. She needed to go to the store and I had planned to stay home and watch the game, but two things happened: 1) she had a terrible headache, and 2) It was one of the ugliest games I had ever seen, a train-wreck in which the score was only 22-19 at halftime.

Just then a graphic flashed across the screen: Butler was 1-21 from two-point range. And they were winning.

So went went to the store and bought groceries. We were lingering in the frozen aisle, talking about what to do for dinner.

"Want to just have White Castle burgers?" she asked.

There was an In-N-Out right across the street and I saw the smile creep across Elizabeth's face. Fifteen minutes later we were in line. I received a text from my friend Nick.

"I'm sure UConn is real proud that they just watched Butler throw up bricks for 40 minutes."

I wrote back: "I went to the store instead. I scored points with Liz, didn't have to watch any more of that game, and now I'm getting In-N-Out."

I ordered my usual Double-Double Animal Style, but then I also added a hamburger.

"You're going to eat two burgers?" Elizabeth asked me.

"Tonight I'm just going to eat the Double-Double, but tomorrow I'm going to have the hamburger with Zankou sauce."

I'd like to pretend she meant Oh my God you are adorable, but I think we all know that's not the case.

My Double-Double that night was delicious, as always, but that's not what I came to tell you about.

Came to talk about the hamburger. 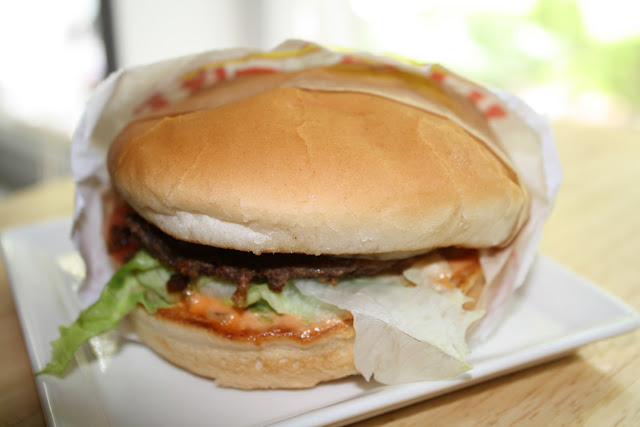 The next day, yesterday, I reheated my burger. 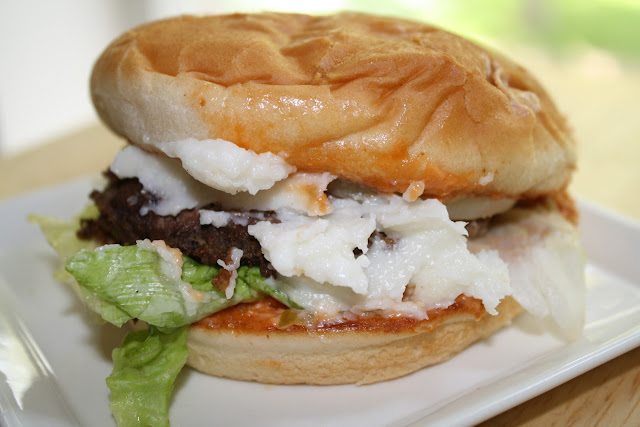 And then I slathered it with Zankou sauce. White gold. It was outstanding. I can't really go into detail; I'm not sure how. How do you describe the Grand Canyon to someone who has never seen it?

I don't know if I will ever do this again, though. It was too good. I don't think it can be repeated.
Posted by JustinM at 11:22 AM

I'm not sure if it speaks to the quality of the In-N-Out burger, or the Zankou sauce, but it is amazing to me that a re-heated day old fast food burger could be described as outstanding.

The Zanzou garlic sauce on that hamburger looks fantastic. Super King Market at 2260 N. Lincoln in Altadena has a fantastic copycat version of the sauce that comes in half pound tubs for a couple of dollars. Knowing you, I strongly suspect you have been there. In the rare event you have not, please, please consider a pilgrimage. While you are there do a full store browse. Be sure to check out the selection & prices in the produce and deli area (the deli area is in a corner and can easily be missed). If you are already a fan, you know what I mean, and if you have never been, you will be in for quite a treat. Oh, and don't forget the garlic sauce!

Ben: It's the burger quality. And also I used my toasted oven. Never the microwave!

Stephen: I have not been, though I have driven by it many times. I guess I'd assumed it was just like a King Ranch Market. But you know what they say about assumptions. So I will check it out.

That is funny, I thought the same thing before going in there. I think that it is Armenian owned, and as such there is more of a Middle Eastern slant in terms of the products. I would be very interested to hear what you think of it.

Would you believe I've never had Zankou Chicken?

Sure. I didn't have it until I was 25, and only then because my boss was Armenian and told me I had to try it. I knew about it, but didn't realize it was that good.

I stand by my original statement- Oh my god.

Your god is Don Mattingly, which is funny in oh-so-many ways.

pp- how did you reheat the burger? microwave? oven? toaster oven?

I will heat up a sauce in the microwave, or if I have a cold (like I have for the last week) and am feeling lazy, water for Theraflu, but cooking actual food in the microwave? I don't remember the last time I did that. Years probably.

I actually busted out laughing when I got to the picture of the Zankou burger. I know the word "epic" is severely overused now but that was an epic idea, drawing the two wolds together in one meaty, garlicy bite.
- Applause -