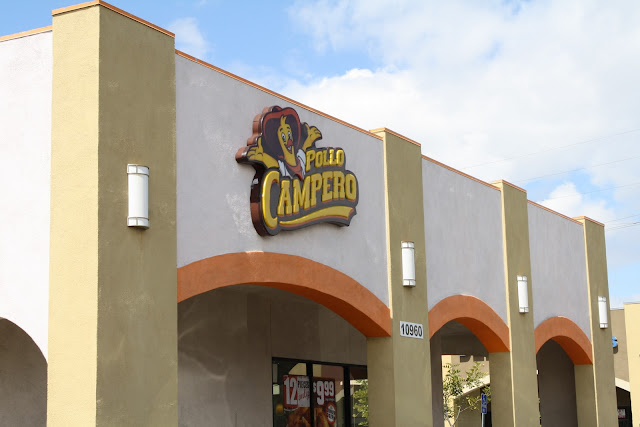 A year and a half ago, Elizabeth and I ate at Pollo Campero in Burbank one night, just before picking up her sisters at the airport. The other day, we were out for a Sunday drive, trying to decide what to do for lunch, and we drove right by it. "Want to try it again?" I asked. 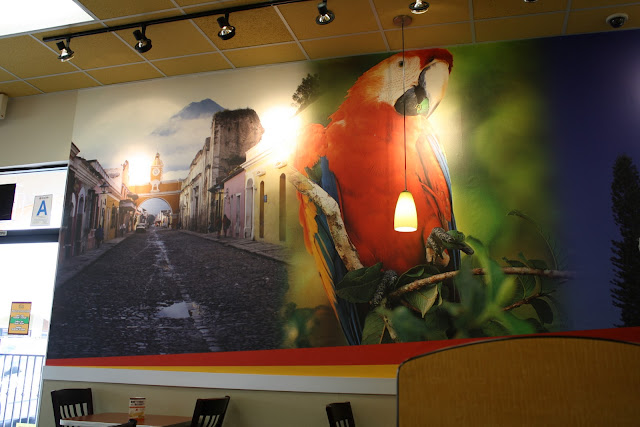 There are a couple large murals on the walls, including one of a giant smiling cartoon chicken.
"Why is he so happy?" Elizabeth asked. "He is about to be breaded and eaten."
I took a picture of the other mural, a much prettier one. 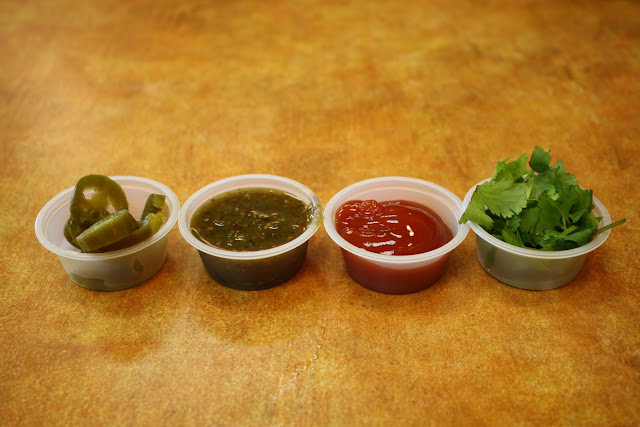 There is a small salsa bar and I took a few items: cilantro, chopped onions, ketchup, and a roasted green tomato salsa, the less spicy of the two they offer. 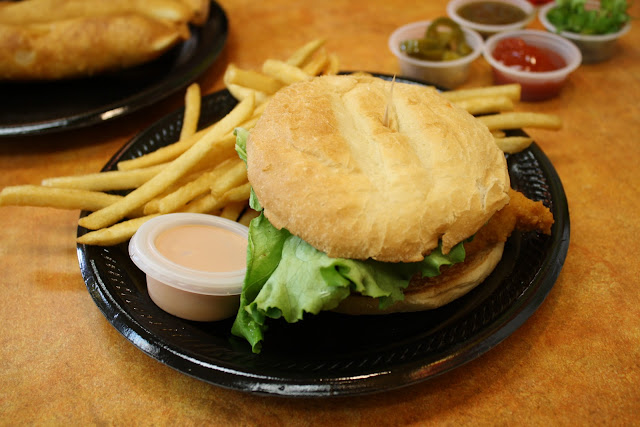 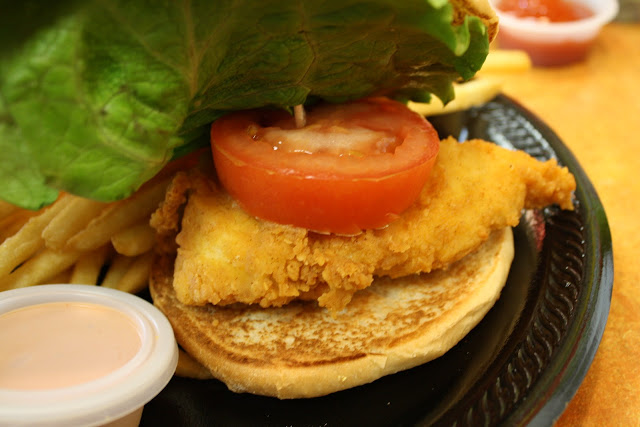 If you like tomatoes, there was a thick, fresh slice of tomato on the sandwich. Of course I removed it immediately. (There was a time when, if I received a sandwich like this, I would not have eaten it simply because the tomato touched it. If there was even a tomato on the plate I would not eat the food, I was so disgusted by them.) 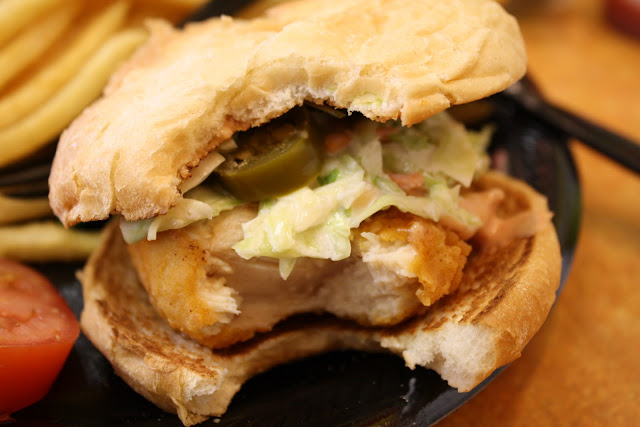 I put some of the sauce on my sandwich - basically a sour cream with a tiny (very tiny) amount of spice - along with jalapenos to heat it up and cole slaw to cool it down. 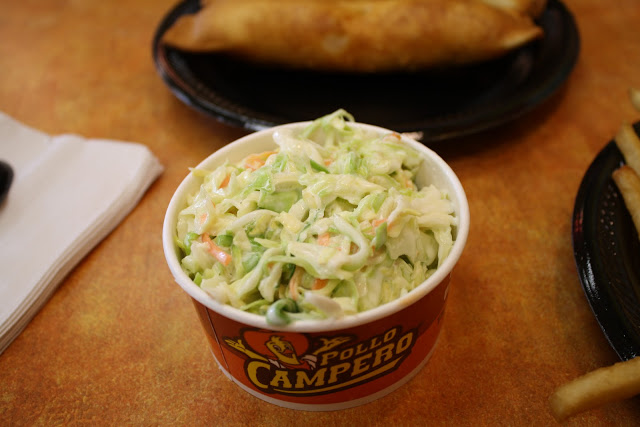 The slaw at Pollo Campero is nothing spectacular, although I admit it could be considered great by fast food standards: it's creamy, which is not my favorite kind of slaw, but it's not too creamy.  I ate all of it, in no small part because the fries were disappointing, limp strings of potato. 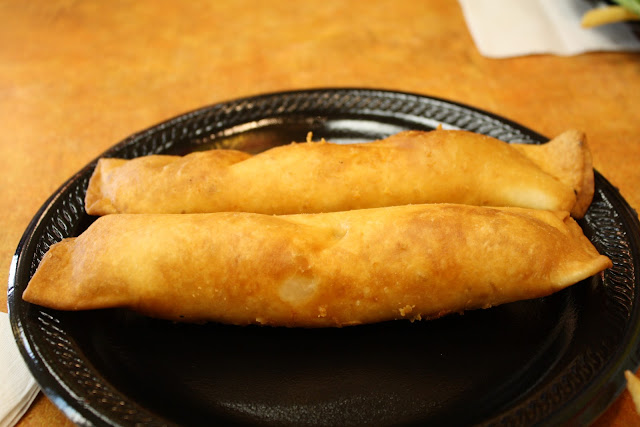 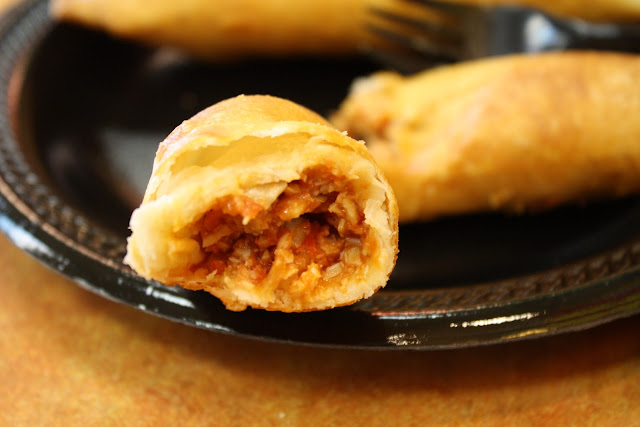 After ordering, I noticed a small banner advertising a 99-cent menu, one of the items being a "chicken crisper roll." I inquired about it and was told it's chicken and salsa inside a lightly fried tortilla. I ordered two. They were delicious, not over-fried but slightly soft and full of flavor. I actually liked these more than the sandwich.

Pollo Campero is a good fast food option if you're close by, but I don't imagine I will ever eat at one again. It's better than KFC (which isn't saying much) but I don't see myself driving to Burbank again to eat there. But I have heard from several people that the Pollo Camperos are much better in their native Guatemala, so if I'm ever there I will certainly try it.
Posted by JustinM at 11:04 AM

I've had it in Guatemala and it is very good down there. So much so that there's a stand right as you drive in to the airport so you can take it home with you on the plane (the flight attendants actually announce on the plane where your Pollo Campero needs to be stored). The girl I was there with, who's Guatemalan and worked for the embassy, emphatically said that it was better in Guatemala, as did all her coworkers. I've never had it here, though, so I can't comment on that.

This is quickly becoming my favorite food blog. Keep up the good work, Justin!

Only kidding. Thanks, I'm glad you enjoy it.

Raw tomatoes are seeds of satan in my mind.