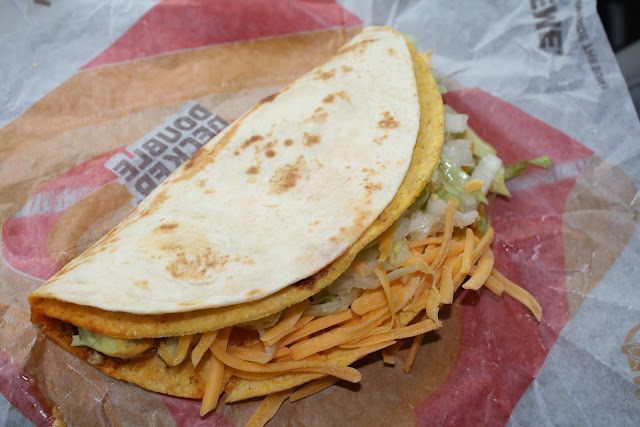 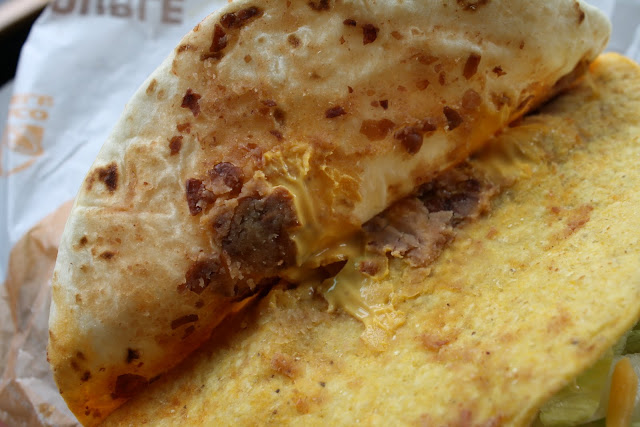 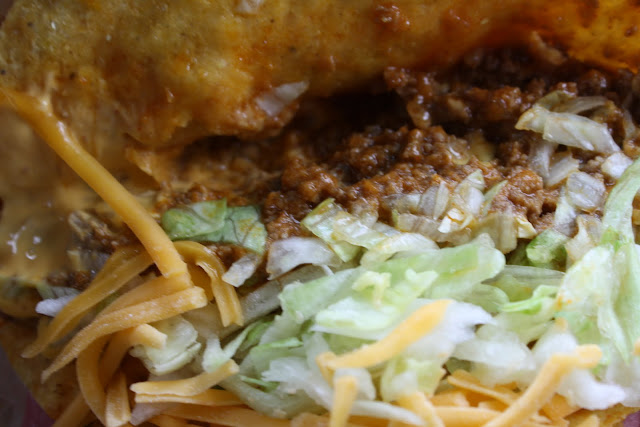 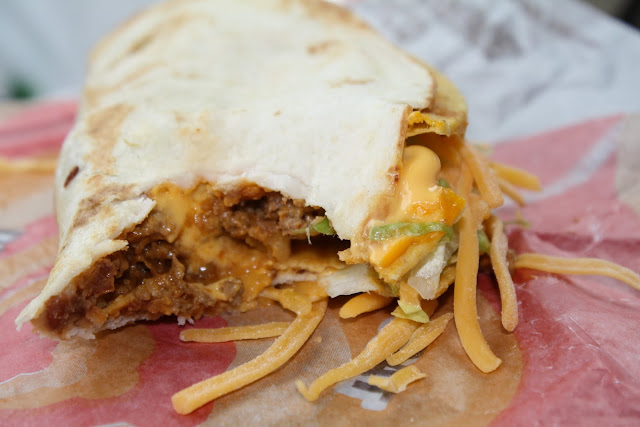 I hadn't planned to try this one. Enough people have already written about it, and, most importantly, I just didn't think it looked that good. I eat tacos pretty frequently these days (mostly because the woman with whom I live just discovered last year how delicious carnitas is and she seems to have an insatiable appetite for them). And I have two or three go-to places for tacos. It probably won't surprise you that Taco Bell is not one of them.

But a couple days ago I was on my way to a particular restaurant when I got caught in one of those all-too-familiar traffic jams in the San Gabriel Valley these days. To those who live here, you know what I mean. To those who do not, I will keep this short: there are quite a few roads torn up these days, often for several-block-long stretches, despite the fact that only two or three people will be working in one small area. Some streets are almost impossible to travel on some days.

I was on one such street where I moved perhaps one block in 20 minutes. I took the lead from quite a few other cars and made a completely illegal maneuver to get the hell out of there. By this time I was incredibly hungry and I passed right by a Taco Bell. What the hell? I figured, I will try that silly-looing double decker taco.

I stood at the counter for several minutes before being acknowledged. (At least the employee apologized for the wait, which makes up for it almost completely in my book.) I ordered the taco for 89 cents. At that price I was expecting a tiny little thing; I was suprised that it actually had some heft in my hand when I received it a few minutes later. I unwrapped it and took a bite.

The beans that are advertised as being part of the layer between the two shells were almost non-existent. But then again I don't really like beans so I didn't care. The main flavor was the nacho cheese sauce. I'm not going to lie: it was not gourmet cheese. But it wasn't bad, certainly a step above that cheesy-sludge you get with movie theater nachos.

And I actually enjoyed the the taco. The contrast between the soft outer tortilla and crispy inner tortilla was nice and the taco itself, while never in danger of being mistaken for a hardshell taco from Rick's or Taco Lita, wasn't bad when sluiced with Taco Bell's new salsa, which I have not stopped enjoying.

While not necessarily being something that I will seek out to eat again, I was not disappointed with the Cheesy Double Decker Taco. Especially considering it was only 89 cents.
Posted by JustinM at 10:37 AM

Hi, just saying good work on the blog and keep it up. I know you may not get 100s of comments like some of those mom-blogs but let's face it, your demographic isn't stay at home moms who post comments like crazy because it's their only source of social interaction. I've been reading for a while and just never feel the need to comment - I know others are in the same boat. Peace.

Thanks for the compliments. I started this for my friends and it's great that so many people have been able to check it out and enjoy it. Even if there aren't many comments, I do get compliments from people either in person or via email and it makes me happy that people are able to get some pleasure out of this.