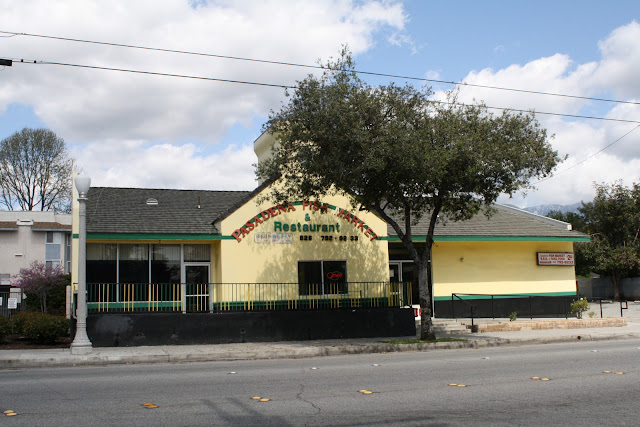 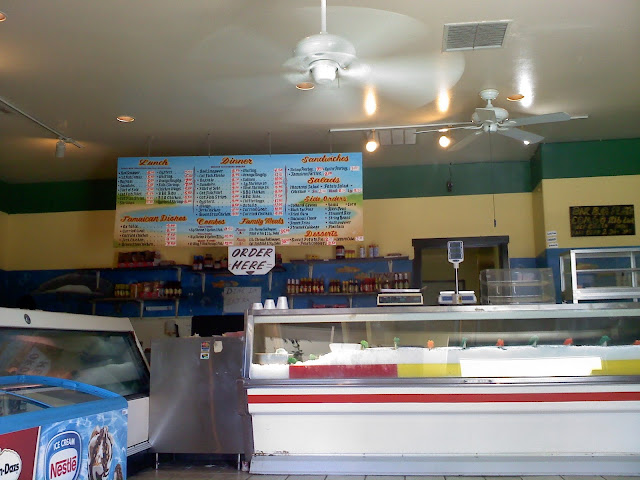 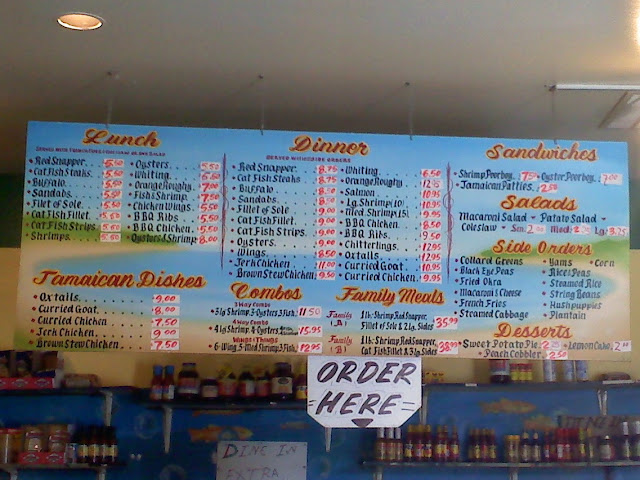 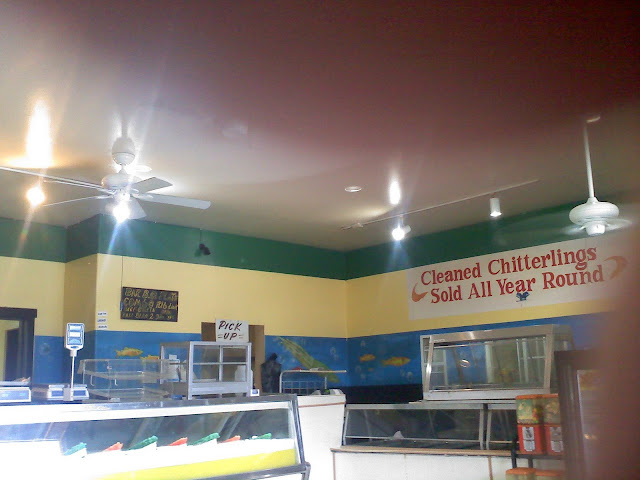 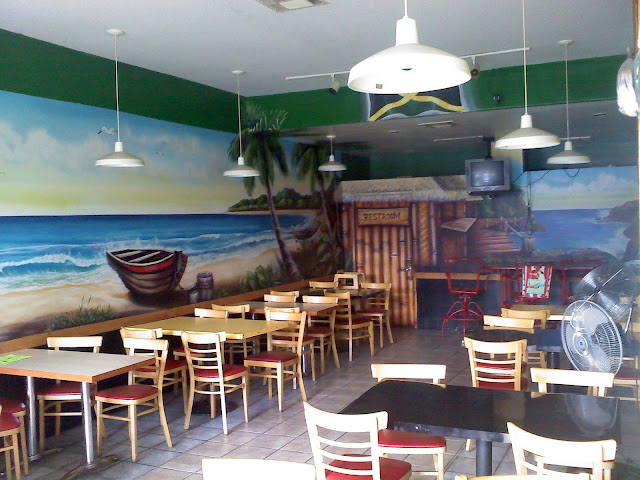 I wrote about Pasadena Fish Market last fall and my infatuation with the place, the way it transported me back to the South, sharing my table with a fly on a hot day and eating a fried shrimp meal better than any I have ever had in the San Gabriel Valley, cormeal-crusted crustaceans that would not have been out of place at a stand on Highway 61. And indeed it was a stand on Highway 61 that I was thinking of while dining at Pasadena Fish Market, time and space telescoping and giving my the strongest sense of deja vu I have ever had, right down to the way the slice of bread was lying on top of the grub in my styrofoam container.

A few days ago I took Elizabeth's car to get new brake pads and by the time I finished I was almost painfully hungry, one of those hungers where you would eat anything but at the same time nothing sounds good to you because you want that perfect food. I heard an ad on the radio for Popeyes butterfly shrimp and that sounded good so I started to drive to Popeyes, but then I had a better idea: Why not hit up Pasadena Fish Market for some catfish? I've heard that the catfish there is fantastic.

There were no other customers when I arrived. I ordered the lunch portion of the catfish strips - they also have catfish steaks and fillets - with fries and cole slaw. The man took out a handful of fresh, white strips of catfish and placed it on the scale: .49 pounds. He took it in the back, breaded it and dropped it in the fryer. I few minutes later I had my styrofoam container and took it out to the car to eat. 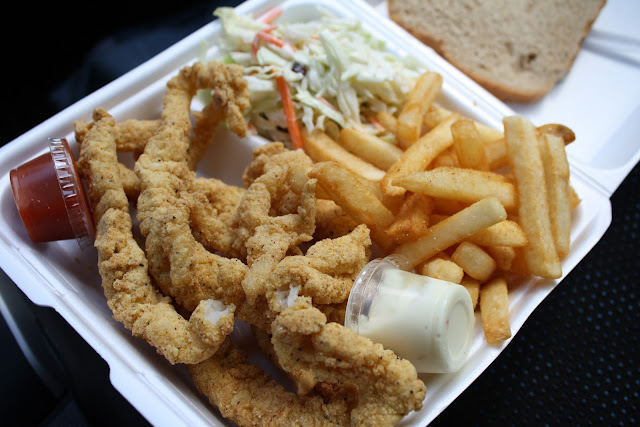 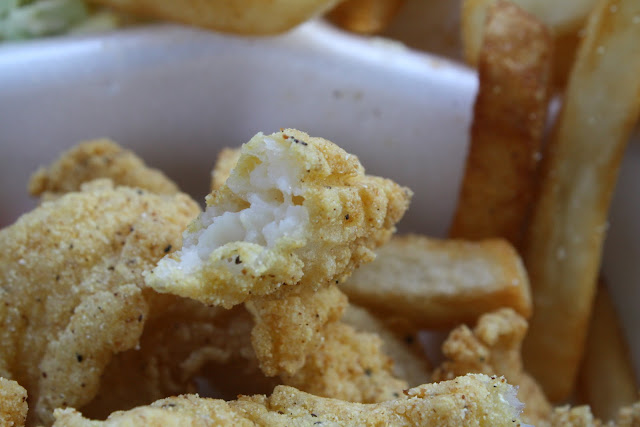 It was beautiful. I almost want to re-do the collage at the top of the blog to include this photo. The catfish was high quality, warm, crispy... everything I want in fried fish. 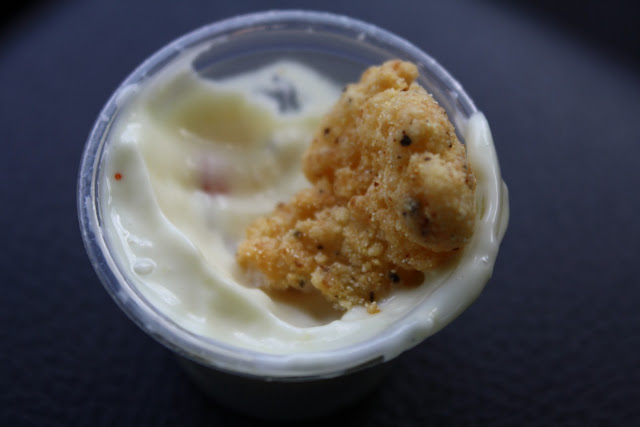 I wish there had been more than a thimble of tartar sauce, but it wasn't a big deal because they also give you a small container of hot sauce that is equally good with the fish. But mostly because it was so good that I didn't need any condiments. A mayonnaise-based sauce is extremely helpful in covering up the taste of lesser-quality seafood, but when the fish is this good, it does not need masking. 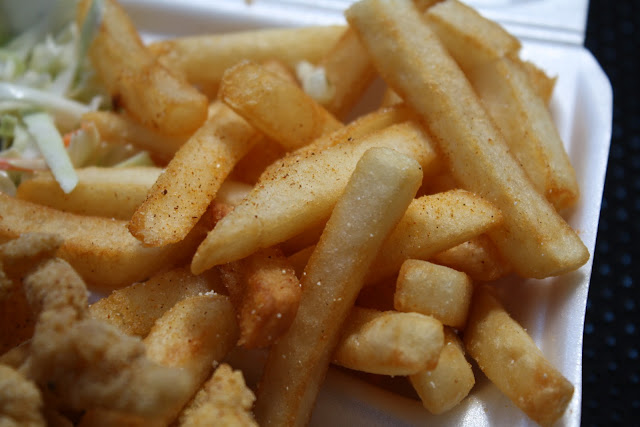 The fries are great, too: just out of the fryer they are hot and crispy and perfectly seasoned.

I liked the catfish even better than the shrimp at Pasadena Fish Market, so I will definitely be back to try some other items. I'm thinking next up will be the orange roughy or the sandabs.

Nobody likes a dirty chitterling.