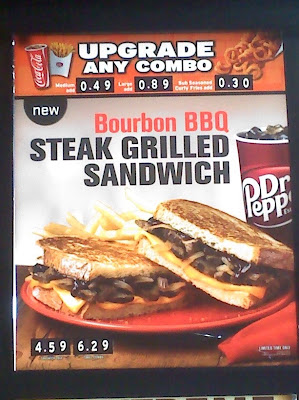 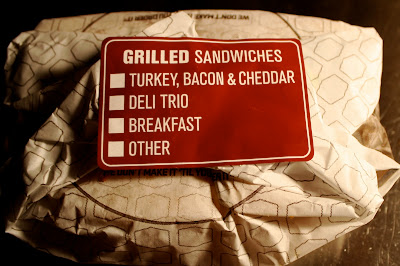 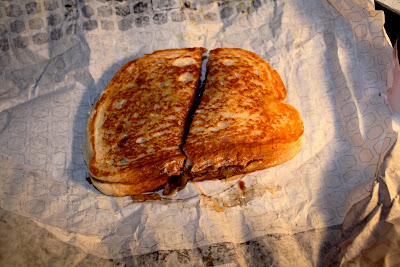 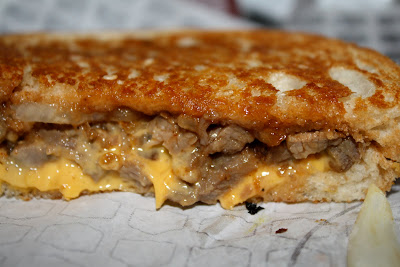 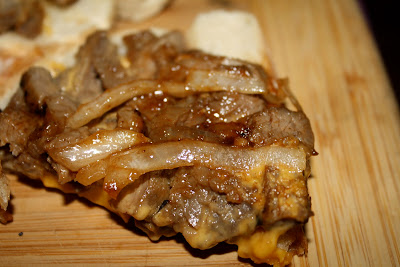 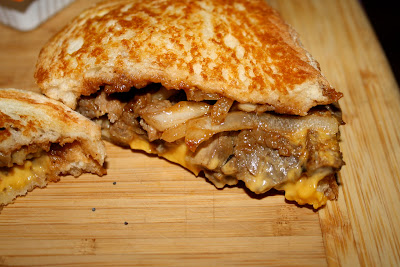 I have written of this phenomenon before: there are three words that are guaranteed to grab my attention when used to describe food: boneless, chipotle and whiskey. It's why I find myself eating at places like Chili's and McDonald's much more frequently than I normally would. It is why, when I read about a new Jack in the Box product debuting next week called a "Bourbon BBQ Steak Grilled Sandwich," my interest was peaked. Technically it doesn't contain any of that trifecta of words, but "Bourbon" is close enough.
As luck - if that's what you want to call it - would have it, Elizabeth's sister and brother in law are in town from the East Coast and Brian has a list of place he wants to check off his culinary list. (It's not the most impressive list you've ever seen; their first meal was at Carl's Jr. which, thankfully, I was not around for.) A couple days ago we ate at In-N-Out before going to the California Science Center, and we all loved it. There was some talk of returning there for dinner.
But Brian also wanted to try Jack in the Box, especially after I told him that I thought it was much better than Carl's Jr. Although I was leaning towards getting a Mamma's pizza and watching the Lakers game last night, they are our guests, so we got in the car and went to Jack to pick up dinner.
When we got there I immediately noticed two things: 1) A line of cars spilling out of the driveway and down the street, and 2) The Bourbon BBQ Steak Sandwich is already available. So that's what I ordered, along with enough egg rolls for everyone to share.
"They have egg rolls?" Brian asked.
"Yes," I said, "and they're delicious." (Even after half a year, my ode to the Jack in the Box egg rolls still remains one of my most popular posts.)
Back home I unwrapped the sandwich. Half of it was firm and crispy, the other half was soggy. I'm not sure how they accomplished this. I took a bite.
This is one of those moments when low expectations are my friend. I was expecting the steak to be tough, fatty little pieces and the bourbon bbq sauce to be that nasty, cloying flavor that all too often accompanies a fast food product labelling itself "bourbon."
But neither assumption was correct: the steak, while not something that I would ever confuse with USDA Prime, was tender. I did not have to pull a single piece out of my mouth because it was inedible, which might be a first for me. The sauce was neither here nor there. I did not love it and, not surprisingly, I could not detect any bourbon taste to it. But it was not thick or sugary, which is how almost all fast food barbecue sauces taste to me.
I loved the grilled onions. The cheese was your typical fast food cheese, which is to say lousy. But overall I liked the sandwich.
I sent a picture of it to my friend Zach and told him so.
"Are you drunk?" he asked.
"No" I replied.
I'm not going to lie here: I can see many ways that this sandwich could go wrong and I think I beat the odds getting a good one. I could see myself ordering another one sometime and getting a sandwich full of the gray, fatty meat that I was expecting this sandwich to contain, with burnt onions and completely soggy bread. So I don't think I will be trying it again. But I liked the sandwich I had.
By the way, our East Coast relatives were impressed with how good the egg rolls were.
"When you said we were getting egg rolls," Brian admitted, "I thought maybe it was a joke, like they were going to be the worst thing ever and you were just seeing if I would actually eat them. But it was really good." 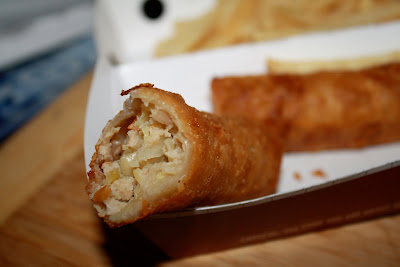 Haha I love the three words of seduction going on here. Good to hear this sammie passed your do-over status test. And now you got me curious about Jack in the box's egg rolls... never had them. They do have the best curly fries ... and pita pockets... or whatever you call them.

Elizabeth LOVES their curly fries, and she split some last night with her sister. However, I don't like curly fries that are over-seasoned - which I think is most of them, and certainly Jack's.

i got this sandwich today. i ordered it sans sauce and cheese, though. i find myself ordering more and more stuff with no sauce or sauce on the side these days. too many restaurants douse their food in sauce and to me its overwhelming and masks true flavor (or lack thereof). as for the sandwich, like u said PP, its aight. loved the grilled onions as well.

and jack in the crack's egg rolls are divine. theyre better than most chinese joints that just pack wilted, soggy cabbage in their nasty ass egg rolls. put some meat and carrots up in thurrrrrrrrrrrrrrrrrrrrr!