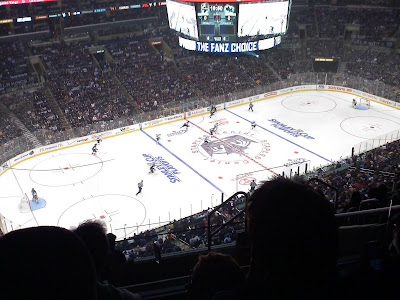 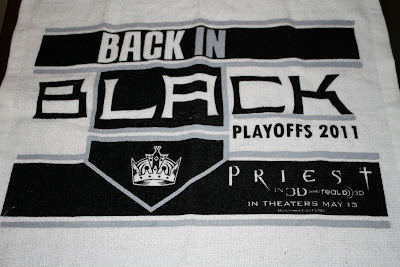 I sent the top picture to my friend Bryce last night with no accompanying comment.

I've never been a fan of hockey. I don't hate the sport, and there are certainly many aspects of it that I find appealing, but it's just not for me.

But there is one thing about hockey that I will defend passionately: there is no single sport I've ever seen with a bigger disparity between watching it on television and watching it live.

In person, the athleticism of the players comes through vividly. On TV it always seems like I could keep up with one of the players; in person it's obvious that I would drop dead within 45 seconds.

Viewed live, you can not only see the puck but follow it at all times. And, most importantly to me, you can actually see the plays develop. On TV, it seems like every goal is an accident; in person a 2-on-1 break is as exciting as almost any play in sports.

Elizabeth's sister and her husband are in town visiting; Brian is a huge hockey fan and wanted to go to a Kings game. I said sure. It's the first game of the playoffs and Staples Center was packed with crazed fans. Normally I never eat at Staples, I either eat at home or stop at Philippe's for a sandwich, but it had been a long day of doing touristy things and we didn't have time for going anywhere else. 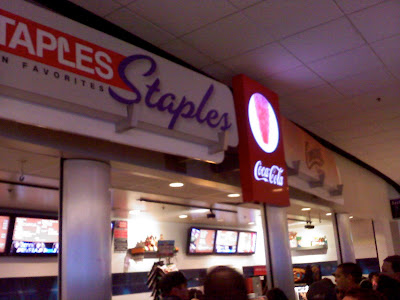 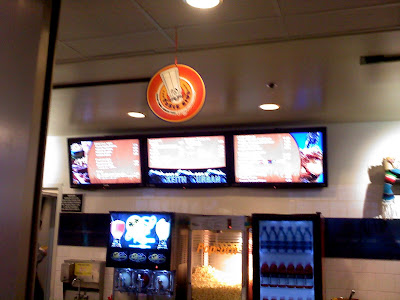 Certainly lousy photos: I took them with my phone in the crappy light of the concourse. Sorry. It's not like you're missing anything, though. I promise. 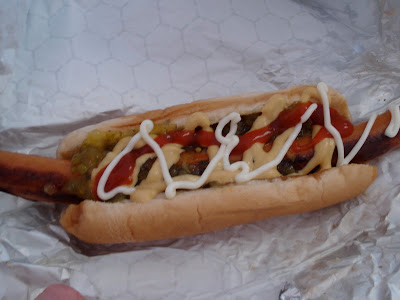 My hot dog with relish, mustard, ketchup and mayo. Normally I keep my hot dogs much simpler, just onions and mustard, but I have always thought the dogs at Staples Center are terrible. So I load them with as many condiments as I can. They claim they use Farmer John but I have no idea what they do to them. I've cooked perhaps 1000 Farmer John hot dogs at home over the course of my life and not once has one been as lousy as every dog I have ever eaten at Staples. 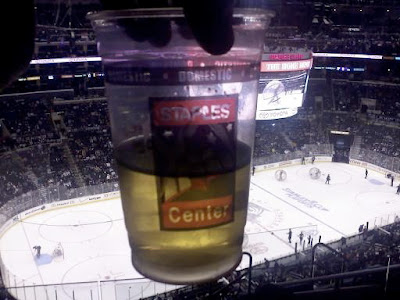 My $9 Coors Light. Oh well. I have no right to complain. It's not like I don't realize that beer at professional sporting events is ridiculously expensive. I should either not drink it or drink it and shut the hell up.

About the game... oh boy. The Kings scored two goals in the first three minutes - both 15 seconds apart - and it seemed like the roof might come off the building. They built a 4-0 lead but then surrendered 5 goals to the Sharks in the second period and lost in overtime 6-5.

It was still fun being there, though.
Posted by JustinM at 10:59 AM

The monumental collapse by the Kings last night is the reason I'm still crying today.

The hot dog is my reason, but if you're a Kings fan, I don't blame you. I was sitting next to a loudmouth Sharks fan for the whole game. Not that I really care about the Kings, but I was cheering for them just because he was so obnoxious (and drunk).