AKA (An American Bistro) 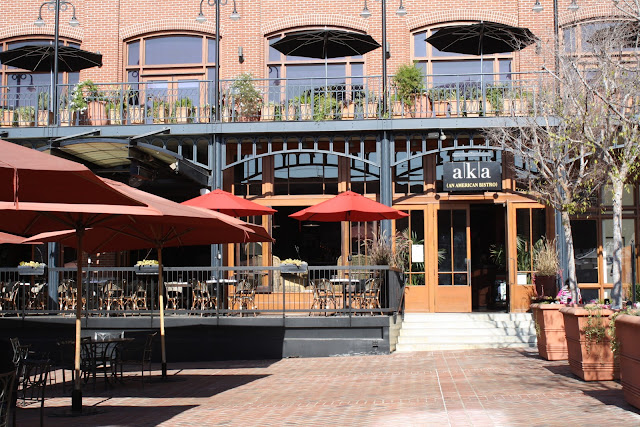 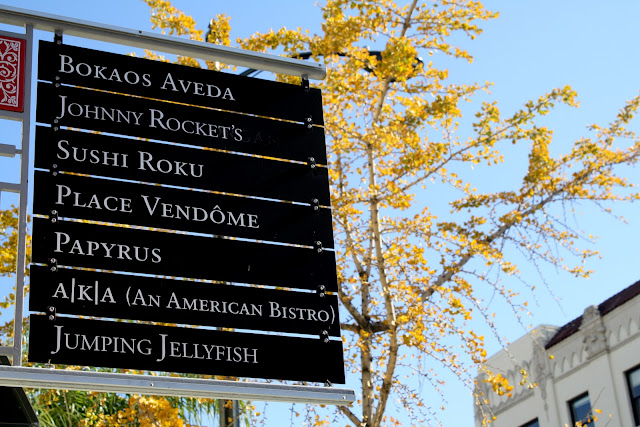 The courtyard at One Colorado - specifically Gordon Biersch, when it was there - has long been one of my favorite places to dine in Old Town. I started eating at Gordon Biersch when I was a teenager, it's the only place in Old Town where I ever had a drink before I turned 21, and, in my memory, it was the place I had my first legal beer on my 21st birthday. But it's been gone for a few years now.
AKA (An American Bistro) opened up in the space about a year ago. Their menu looked interesting but I never went. I saw photos of the interior and it did not look anywhere near as inviting and relaxed as Gordon Biersch had been. Recently, on my dad's birthday, my mom suggested we all go there for lunch. 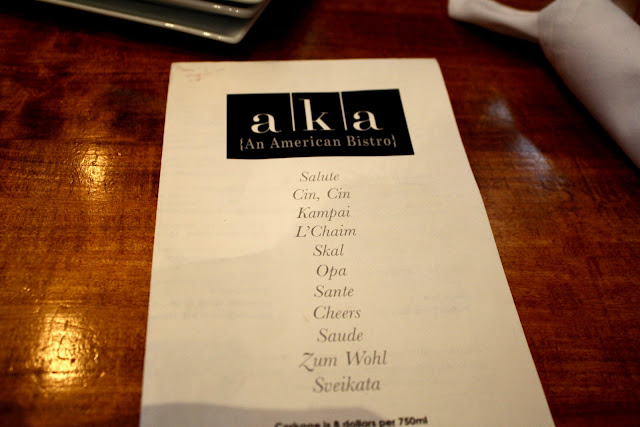 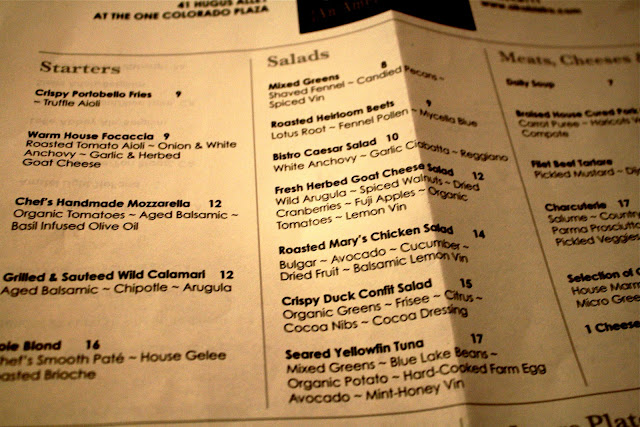 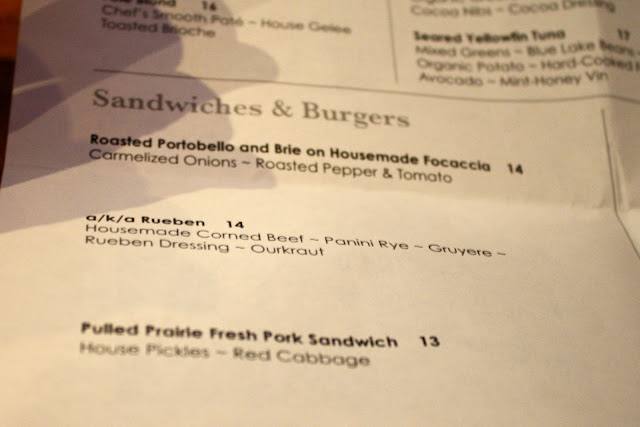 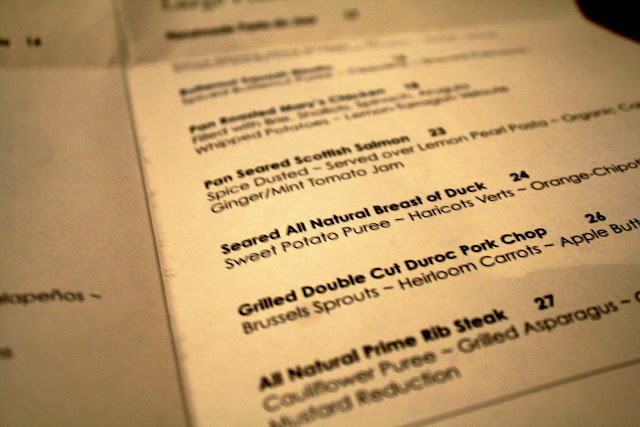 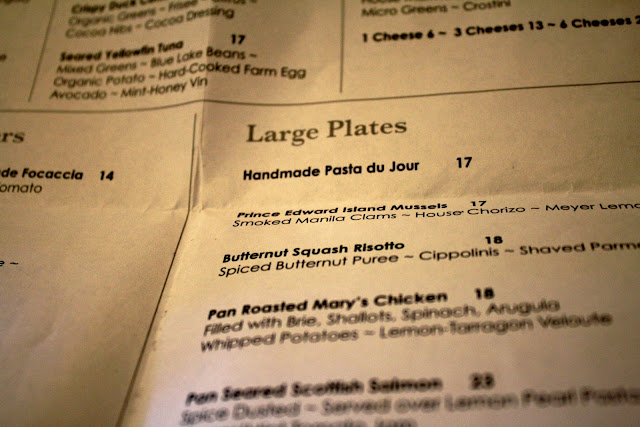 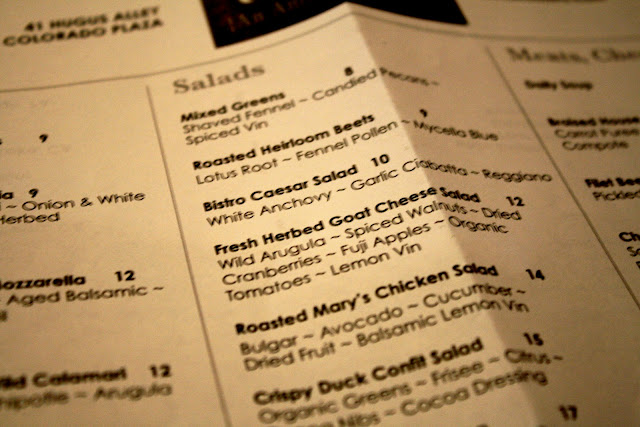 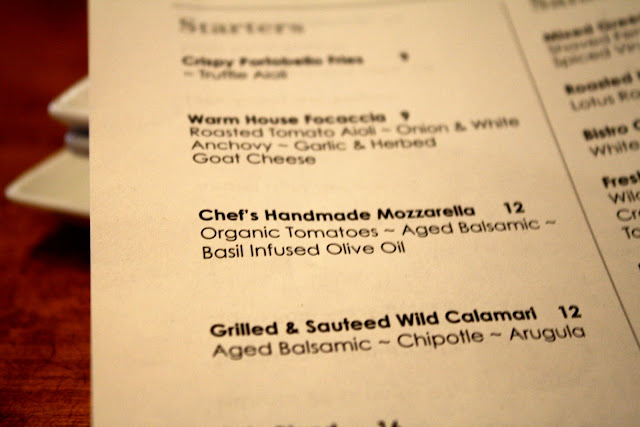 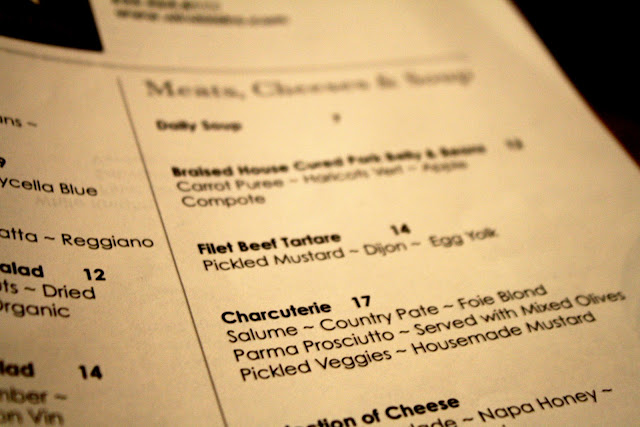 The menu claims to be inspired by the flavors of California wine country, and many dishes did sound like they'd be nicely complemented by a glass of wine. (The restaurant's wine list has some of my favorites on it.) 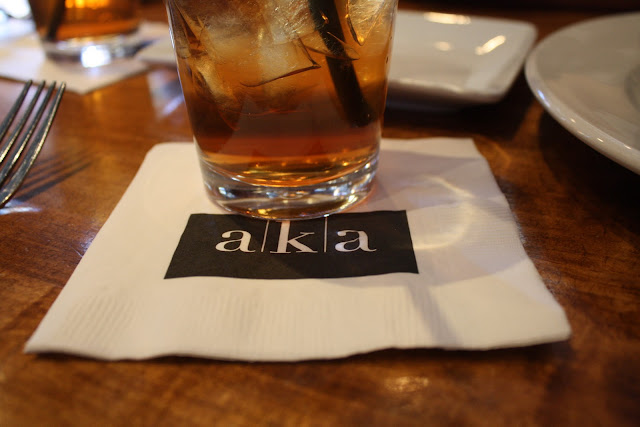 But it was the middle of a warm December day and I wasn't in the mood for anything stronger than iced tea. 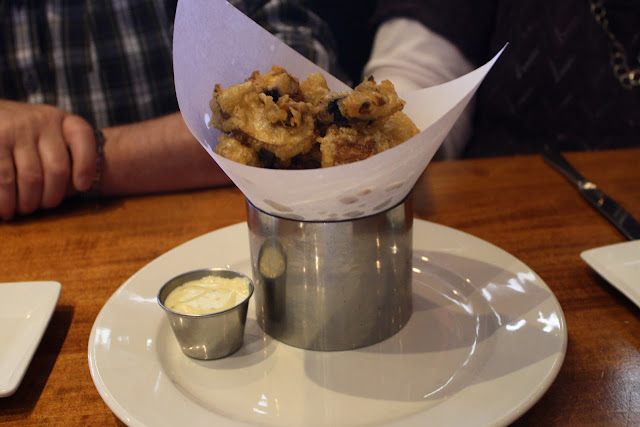 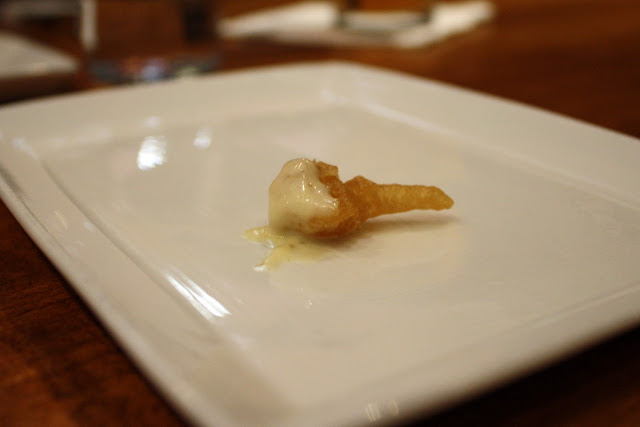 My mom, who had been to AKA before, informed me that we had to try the portobello fries. I'm not a big fan of portobellos, so take my opinion with a grain of salt, but I wasn't impressed. The batter was crispy and there were several large pieces of portobello on top, but beneath them were a bunch of pieces of batter with no mushrooms. At least a quarter of the cup was just batter.

The truffle aioli, however, was fantastic. 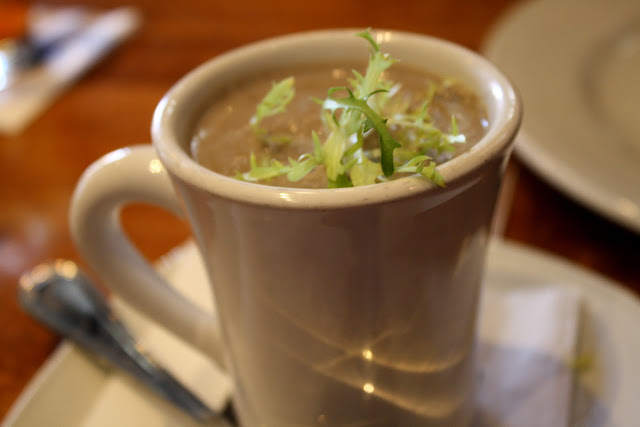 My dad started with a cup of soup which was, literally, a small coffee cup. He said it was fine. 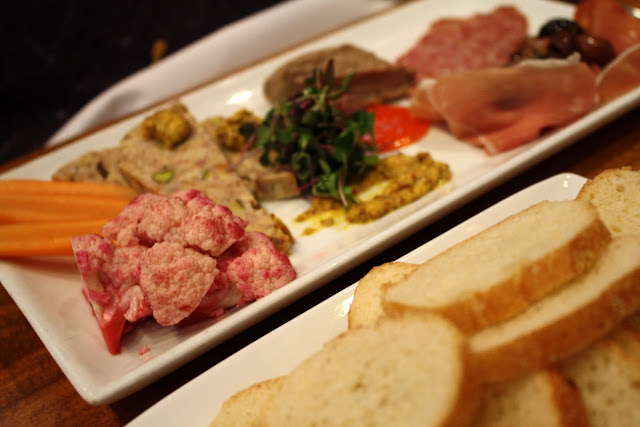 My mom had the charcuterie plate, with a few scattered pieces of meat and some pickled vegetables. I did not think it looked very appetizing, but she loved it. 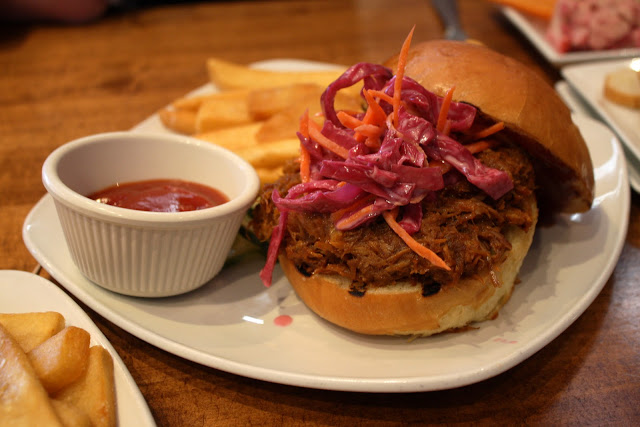 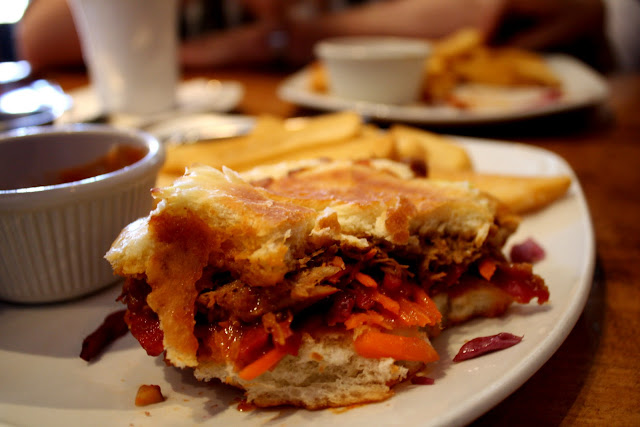 My dad ordered the pulled pork sandwich. He only took a couple of bites and announced that he didn't like it, especially the sauce. I had some and thought it was fine. Not very good, but not bad. (Though certainly not a 13-dollar sandwich.) 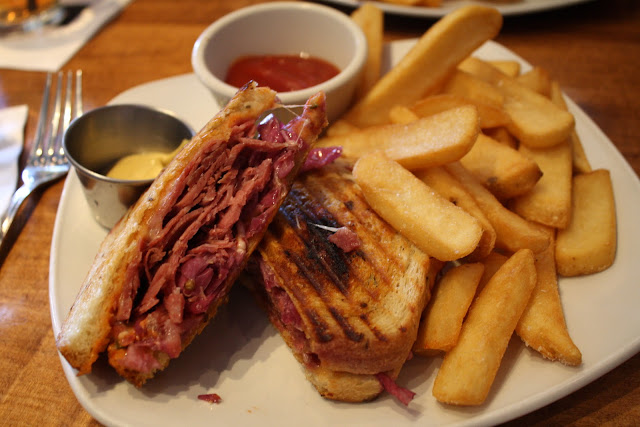 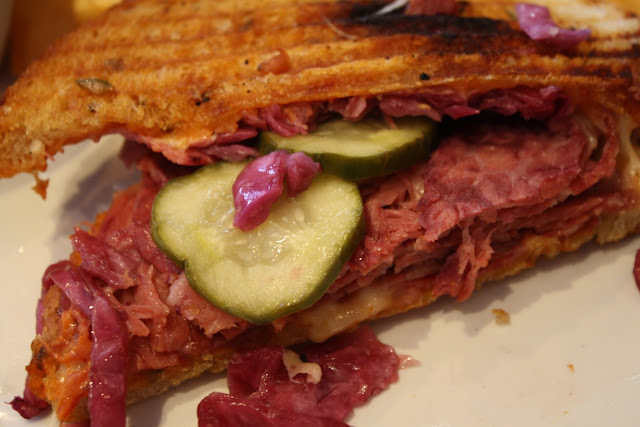 I liked my Reuben more than the pulled pork but was astonished at the size of it. No, I wasn't expecting it to be like one of the mammoth sandwiches from New York Deli, but I was hoping that each half of the sandwich would be more than three bites or so. (It's hard to gauge the size of the sandwich from the picture because the plate it came on was pretty small.) The components of the sandwich were good - especially the house-made pickles, but it tasted no different than dozens of coffee shop Reubens I have eaten in my life.

The steak fries were the same kind I purchase in bags for two dollars at Ralph's. They are fine as long as they are hot and crispy, which these were.

I was underwhelmed by AKA Bistro. There was nothing really wrong with the food but nothing was very good (other than the aioli and pickles). And then we got the bill. With tax and tip it ended up being ninety dollars. That blew me away.

(I sent a text to a friend of mine, someone who knows the Pasadena dining scene better than anyone else I know, detailing that lunch for three without alcohol was ninety bucks. His reply: "That's a [owner] Robert Simon production, all right!")

While my dad felt the same way I did ("Next year for my birthday let's just get tacos") my mom still really likes the place. What I found stuffy and pretentious, I suppose someone else might find romantic and gourmet. But it isn't for me.
Posted by JustinM at 10:00 AM