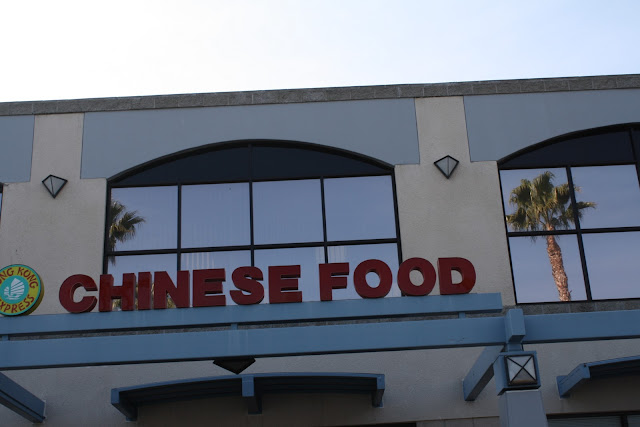 Up in the shopping center on the corner of Fair Oaks & Orange Grove, I have noticed the big red letters reading "Chinese Food" for years. I have a policy not to eat at restaurants that feature their style of cuisine more prominently than their name. Okay, that's not really true, I just made that up. But it seems like something that should be good advice. At any rate, I never considered going to this restaurant.

Until recently. I was up in that part of town and couldn't figure out what I wanted. (Well, actually I wanted to try the Church's spicy Southern-style chicken sandwich across the street, but as I've written, they are incapable of ever giving me the correct sandwich.) So I figured "Why not?" I love Chinese food and I even really like Americanized Chinese food a lot of the time.

The place was packed when I walked in. Many of the customers had giant plates of food in front of them. This place seemed indistinguishable from La Mein, which I called the worst Chinese food I have ever had.

I ordered a two-item combo with rice, a chicken and shrimp egg roll, and a soda. The total was eight bucks and change. I said thank you, was completely ignored, and took the box of food to my car. It weighed at least four pounds. 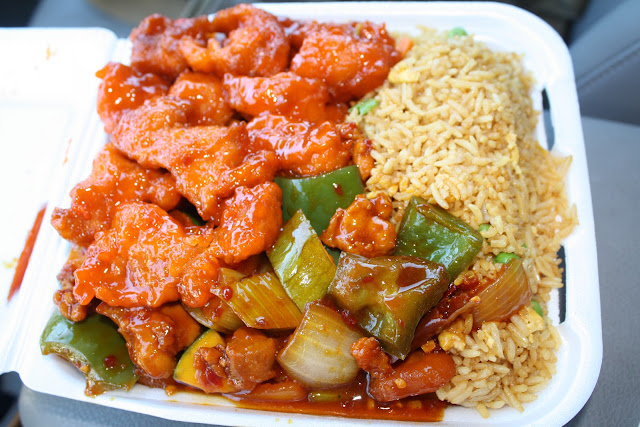 Yep, this is pretty much exactly what I was expecting: a box piled high with rice and chicken, the top of the container seemingly bulging. 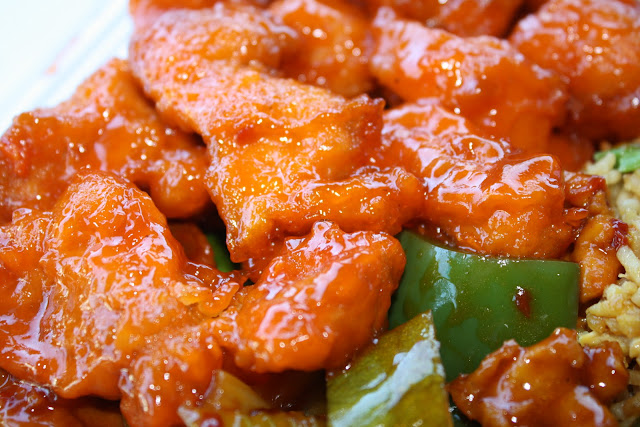 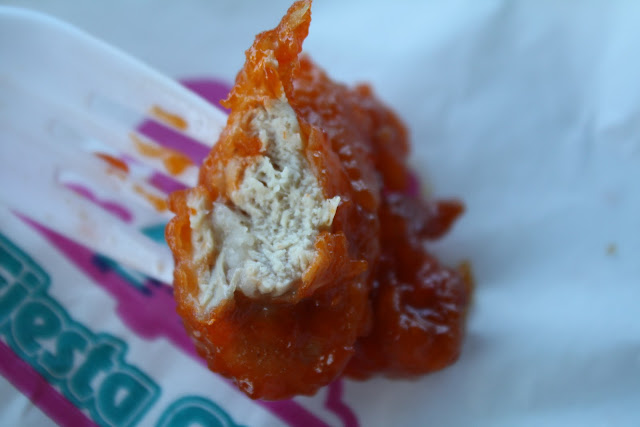 The orange chicken was not good. There was no discernible flavor to the sauce and the chicken was rubbery. There might as well not have been any batter on it, because there was no crunch to it. Now, it could have been a lot worse - it wasn't too sugary like that sludge at La Mein, and I appreciate that it was white meat chicken - but it was obvious Hong Kong Express is concerned with giving you quantity, not quality. 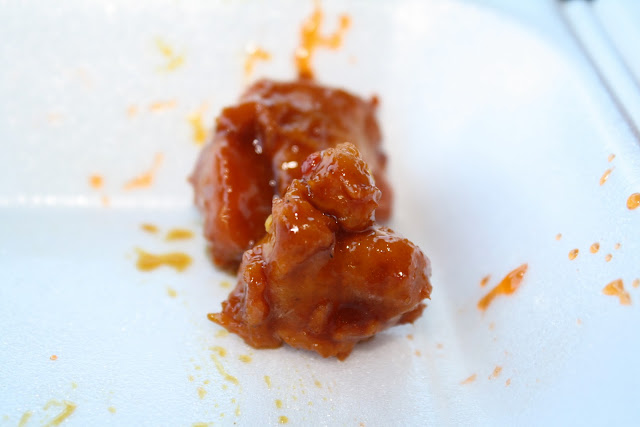 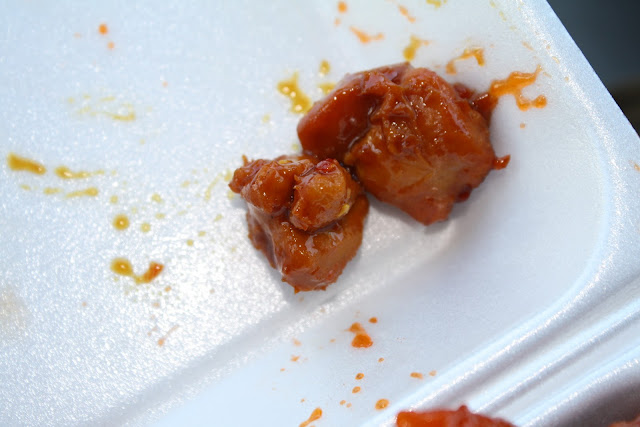 My second option, the spicy chicken, was pretty good. I suppose it's possible I just thought it was good because it was so much better than the orange chicken, but whatever. This chicken was not rubbery like the orange chicken, and the sauce was actually a little spicy. There was only half as much of this as there was of the orange chicken. I wish it had been the other way around.

The rice was awful. I thought that with how busy Hong Kong Express was, at least they would have been turning over the rice. This tasted like it had been sitting around for days. I ate two spoonfuls and no more. (I actually only ate about a quarter of the food in the styrofoam box and left it sitting on a low wall. Hopefully someone found it and enjoyed the food more than I did.) 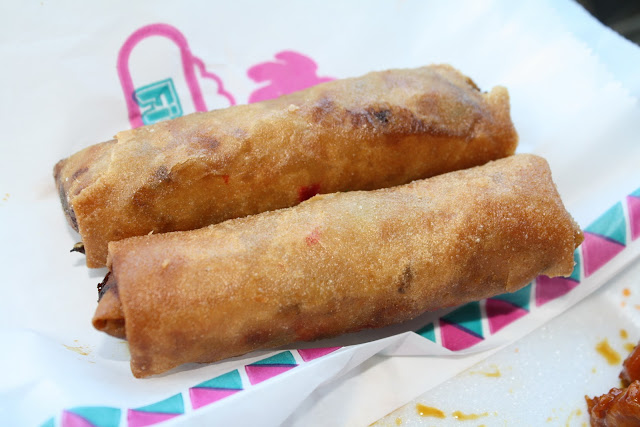 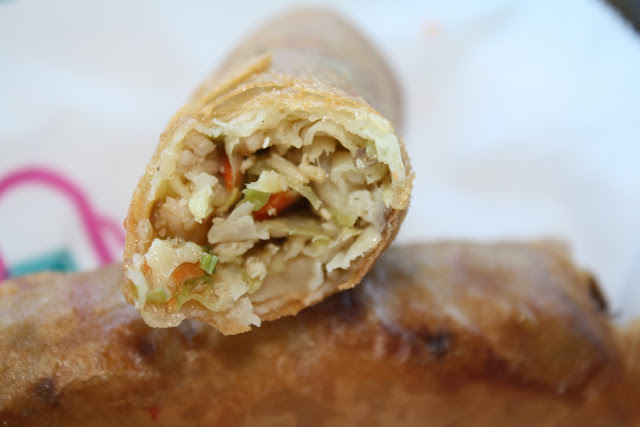 The shrimp and chicken egg rolls came two to an order and were easily the highlight of the meal. I bet they were delicious when they were fresh out of the fryer. I don't know how long ago that was, though. They weren't very crisp. But the contents were pretty tasty. 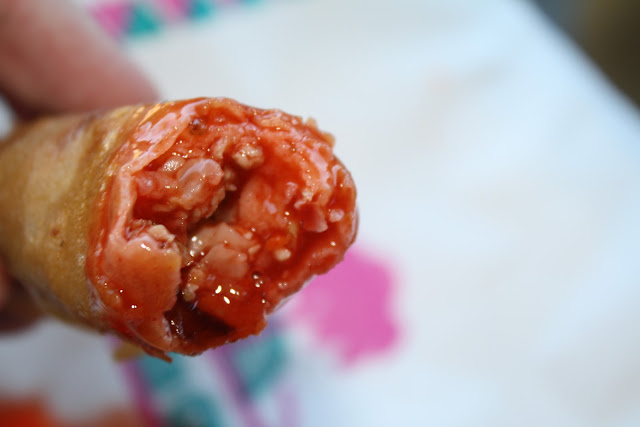 And went well with a dunking in the Trappey's hot sauce that I keep in the car.

Although I didn't think much of Hong Kong Express, it's not like I can call the place disappointing. It is what it is, and you know exactly what it is when you walk in: an inexpensive joint serving massive portions of food.
Posted by JustinM at 12:06 PM

Yup - your review is spot on. I've eaten here a few times. Perfect if you have no time but want a ton of food. I usually got the lo mein instead of rice because it was noticeably better (although still not great). Mindless Chinese food.

Well said Ben. It's not very good but if you going in there expecting it to be good, I don't know what to tell you.