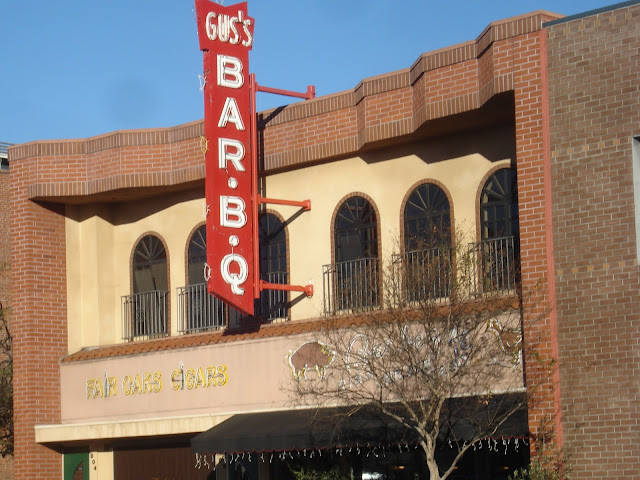 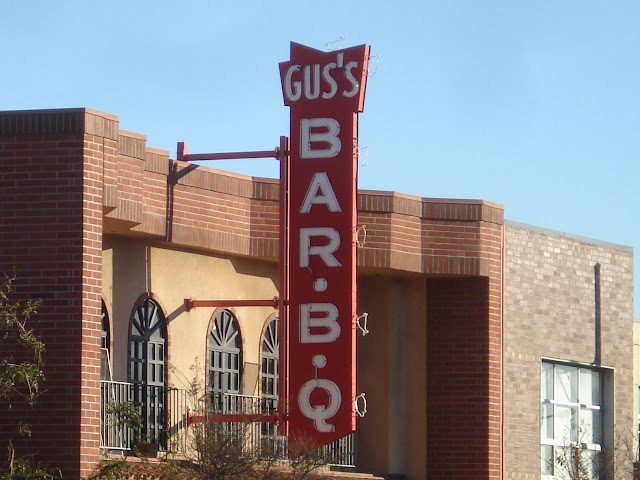 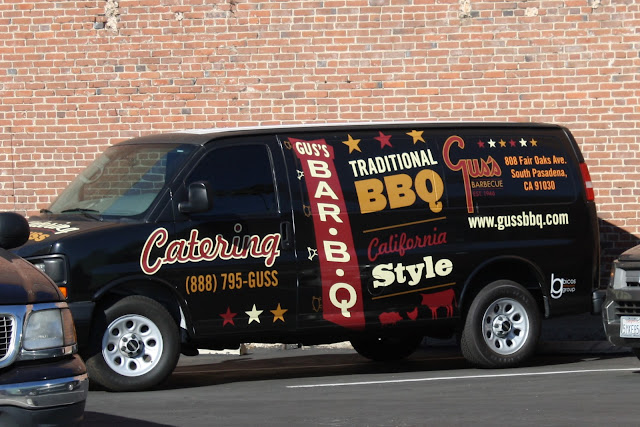 Gus's Barbeque has been around for a long time, but a few years ago they re-opened with renovations and a more barbecue-focused menu. I went there in 2008 and, while I really liked the sliders I had as an appetizer - and Elizabeth loved her fried chicken - I thought my pulled pork sandwich was rather pathetic. I doubted it was real barbecue - it had all the markings of being cooked in an oven - and it was served on a ciabatta bun. (I won't go into a rant but simply say that in scores of barbecue meals in the South, I have never once seen ciabatta bread.)

Last week my friend Zach and I met up to go out to lunch. I didn't want to stray too far from home that day so I suggested we try Gus's. While I prefer Southern, pork-intensive barbecue, Zach is more of a fan of the Texas, beef-heavy stuff. I figured we could try both and see how they stack up. 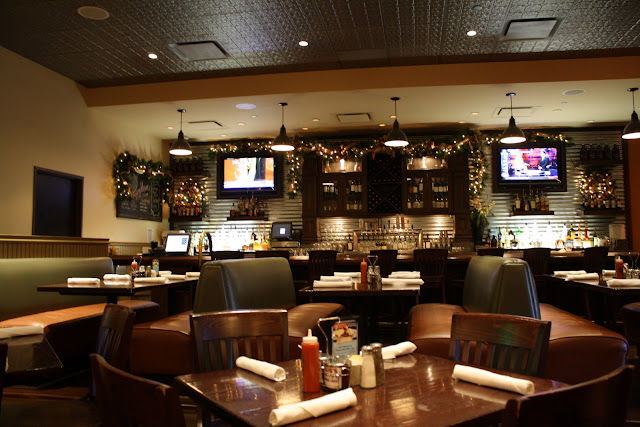 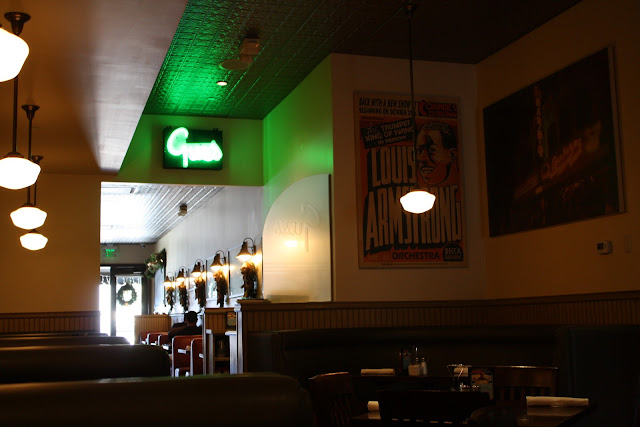 We got there at 11:45. There were only two other tables occupied. By the time we left, about 45 minutes later, it was packed. 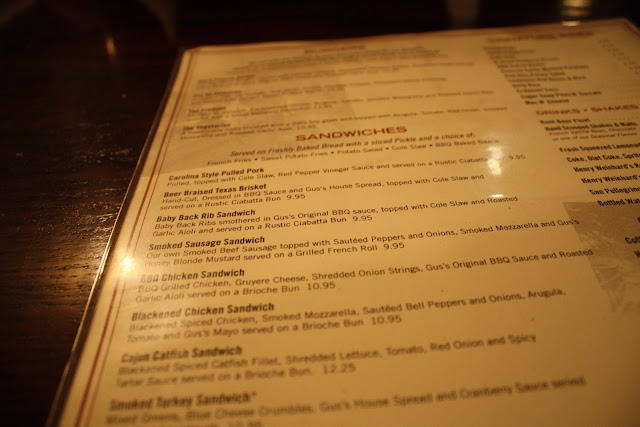 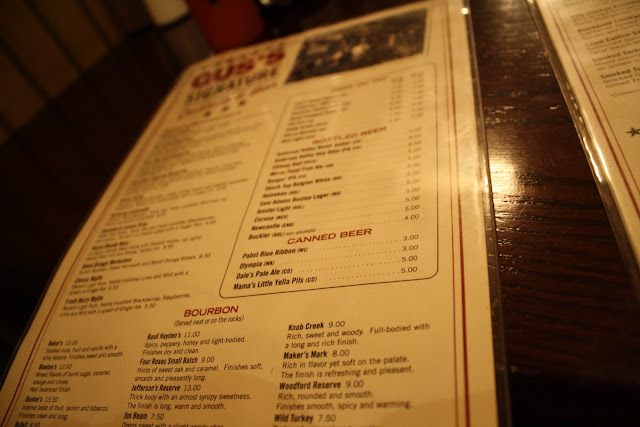 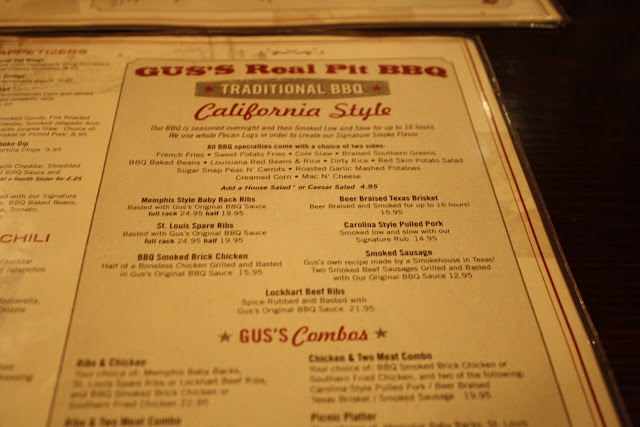 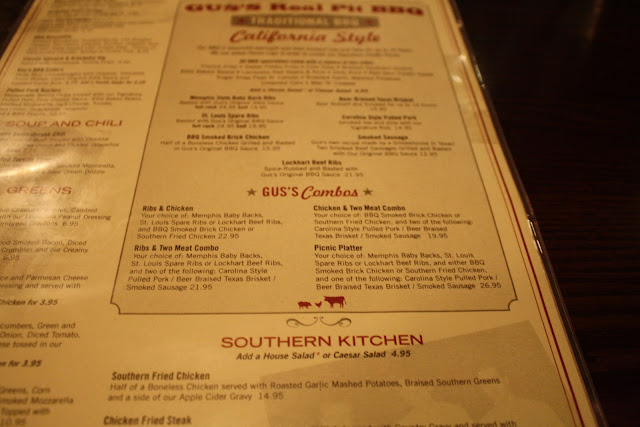 The menu pictures - well, all the pictures here, really - aren't great, I know. It's really dark inside Gus's. And I didn't want to use the flash. 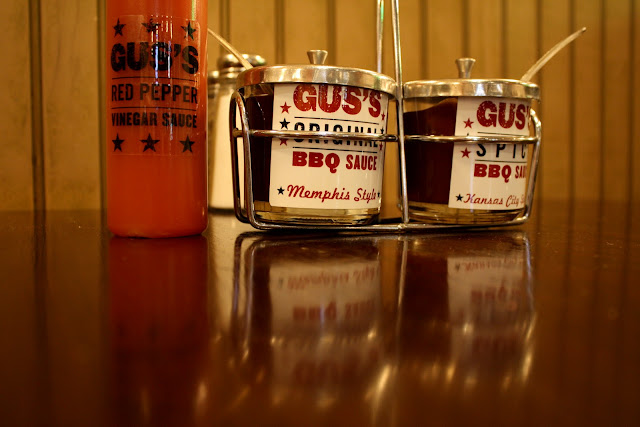 There were three sauces on the table: Memphis Style Original BBQ Sauce, Kansas City Style Spicy BBQ Sauce, and Red Pepper Vinegar Sauce. The first two taste pretty similar - there is nothing spicy about the Kansas City sauce, but the red pepper vinegar sauce was outstanding. 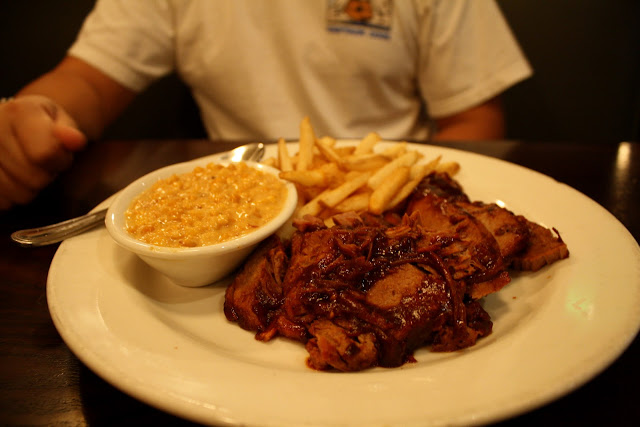 Zach had the brisket plate, with fries and creamed corn. He gave me a piece and I really liked it - it was tender and tasty. I didn't detect any smoke flavor and certainly wished I could have tried a bite without sauce on it, but it was better than the pork I had on my previous visit and, as it turned out, better than the pork I had on this visit, too. 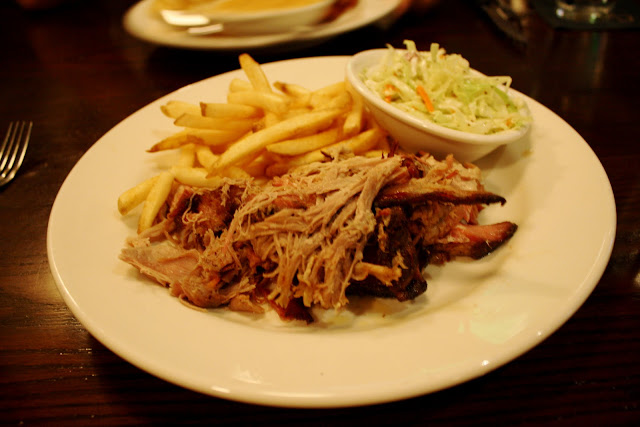 I had the pulled pork plate with fries and slaw. It was again mediocre. There were a few strands that were moist and flavorful, but overall it was dry, and there were just far too many pieces of fat. Whoever pulled this pork did not take very much care with it. 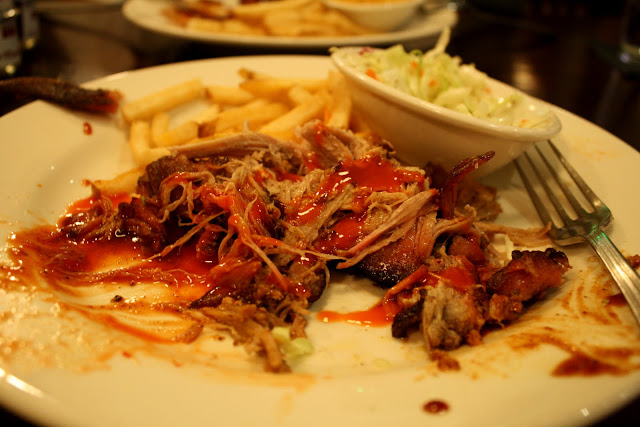 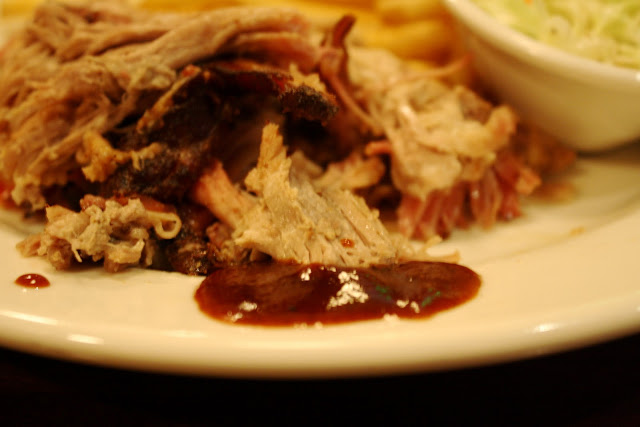 But neither of the ketchup-based sauces complemented the pork. 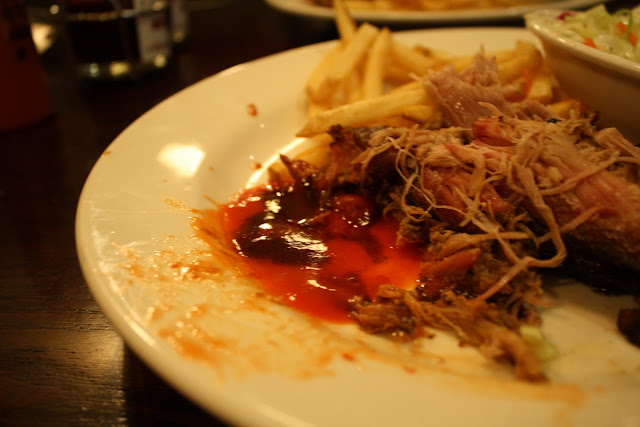 I did not think either of my sides were very good, however a mix of the "spicy" barbecue sauce and vinegar sauce went well with the fries.

I can understand why people like Gus's. The service was very good and it's welcoming and attractive inside. And three of the four entrees I have tried while dining there on two occasions - the brisket, sliders, and fried chicken - were all very good. But the pork has not been good either time. I'm not opposed to returning to Gus's (although I won't be surprised if I never do), but I won't be getting their barbecue again.

What a downer. That vinegar suace looks really great - I love vinegar based sauces with BBQ, too!

Fritos: My meal certainly was. But, you know, it's not a bad place, they make some things well. Just not barbecue.

Anon: I wasn't a huge Zack Attack fan, but I admit their Friends Forever tour kicked ass on par with Dylan & The Hawks in England '66.

Ciabatta bread seems to be the bread of choice the last few yrs. Even fast food restaurants have featured it! But it's not my choice, although I seem to recall liking their pulled pork sandwich. Gus's seems to be doing better with the new mgmt.

If it's masking a fast food burger/sandwich, I'm just fine with that. And ciabatta crisps up nicely on the panini press. But any cook who is proud of his or her barbecue will not serve it on a hard roll like ciabatta or pretzel. That is only done by someone trying to cover up inferior 'cue.

You're right, Gus's does seem to be doing really well.

Have you been to canyon city BBQ in Azusa? It's very very good

Yes, three times. One time I stood around for about ten minutes while no one greeted me. So I left. The second time the food was average. The third time it was incredible, one of the best barbecue sandwiches I have ever had in California. But I haven't been in at least two years.

I feel like the new renovation of Gus’s is a little too slick for my taste. I’m not much for bbq but if I were I’d prefer it in a place with a little more soul which I think the old place had and the new place lacks. Just look at the sign outside – it’s still perfect – but I feel misled when I walk inside. I mean, they used to have a quarter operated bumper pool table in the bar in the back – classic and unique and a little divey is more my style but I can understand that it probably doesn’t attract much business. Now that I think about it, every restaurant in South Pas has done the same thing - Carmine’s and Big Man’s (Charlie’s Trio), too. And now The Bakery (Wild Thyme). What’s left for an old curmudgeon like me!

Seriously, though, I respect your opinions about Gus's. It is slick... but, though I only ate at it once before the remodel, I don't mind the slickness because the food is vastly improved from that one meal I had there years ago.