Another One Bites The Dust: The Trader Joe's Pizza Piadina 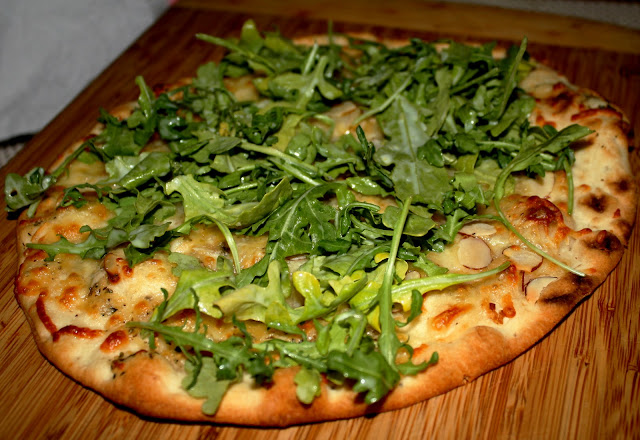 Elizabeth came to Trader Joe's much later in life than I did, so I've tried to prepare her for this day. It's an inescapable fact that the things you love most at Trader Joe's often disappear.

I thought the Pizza Piadina was fine, nothing special, but she really loved it. The last three visits to TJ's it was not only gone - not unusual, especially when you visit the store on a Sunday afternoon/evening - but the tag for the item on the shelf was missing.

I had a bad feeling about it and thus I was not surprised at the response the other day when I asked asked an employee if they were discontinuing the Piadina.

"It's being discontinued, isn't it?" I asked.

"We're making room for other items," she replied.

"Which means...." I left the sentence hanging.

"It's being discontinued," she added.

I've been through this before, many times, so I took it in stride, but I did not look forward to telling Elizabeth. Her response was predictable:

"Why would they get rid of it! Everyone likes it, half the time it's sold out!"

It got me thinking about all the things I've loved over the years that have disappeared off the TJ's shelves. Undoubtedly this list is incomplete:

1) Goat cheese empanadas. I have had better empanadas at a couple of restaurants over the years, but in terms of store-bought, nothing comes close to these. It came with some kind of a sauce - in my mind it was marinara, but I admit that may not be it - that seemed like it would not complement it, but complemented it perfectly.

2) Chimichurri sauce. Unlike the above item, I have never even had chimichurri sauce in a restaurant that was the equal of Trader Joe's refrigerated chimichurri sauce. Not only did it have ample amounts of cilantro and parsley, but there were lots of little chunks of garlic in the sauce. I would tear up pieces of a mini baguette and dunk them in the sauce, and if I finished the bread it was not uncommon for me to eat a couple of spoonfuls of the sauce by itself. If I could have one TJ's item back, it would be this one.

3) Asian-style "chicken for lettuce wraps." I used to make chicken lettuce wraps from scratch all the time until I discovered these. They came in a plastic container separated into two compartments: the chicken and veggies (which you microwaved), and crispy noodles (which you didn't). There were also packets of a ginger sauce that would have been popular if sold in bottles. I often put the chicken into lettuce wraps, as the name indicates, but sometimes I just ate it with a spoon, it was that good.

4) Pizza Formaggio di Capra. This was probably my favorite TJ's frozen pizza of all time. There were five big slabs of goat cheese on the pizza. (And four olives which I always picked off.) I would bake it in the oven and drizzle it with olive oil. For some reason TJ's has decided to carry both the three-cheese and four-cheese pizzas, but they got rid of this one. I love you Trader Joe's, but sometimes I really hate you.

5) Wasabi mayo. Unlike most flavored mayos I have tried over the years, this one was actually spicy.

6) Korma simmer sauce. I could make Indian food at home that was actually good and really easy with this sauce.

8) Tequila lime jalapeno breaded shrimp. I mentioned last month that in my entire life I have only found one kind of shrimp that I thought acceptable when baked in the oven (as opposed to fried). This was it. Damn these things were so delicious. They actually got crispy in the oven and there were pieces of jalapeno inside the shrimp. (They were curiously devoid of heat, but they still tasted great.)

And there are several other things whose names are lost to me (some little pigs-in-a-blanket frozen snack with sweet & sour sauce, a garlic-aioli mustard, ready-made cornmeal pizza crust) but this list is enough for now.
Posted by JustinM at 12:00 PM

The Beer fondue is gone as of this year - my absolute favorite of all time! :( sadness abounds. we used to buy a few pouches each winter and take them camping in the spring/summer. everyone was always impressed when we "whipped up" fondue for a cocktail appetizer round the campfire. ALways love your blog, thanks for keeping it current.

Hi Amy. Thanks too bad - I've had that several times (I wrote about it in March '10), it was better and much cheaper than the Whole Foods fondue.

I hate that when it happens! :(

TJ's giveth and TJ's taketh away.