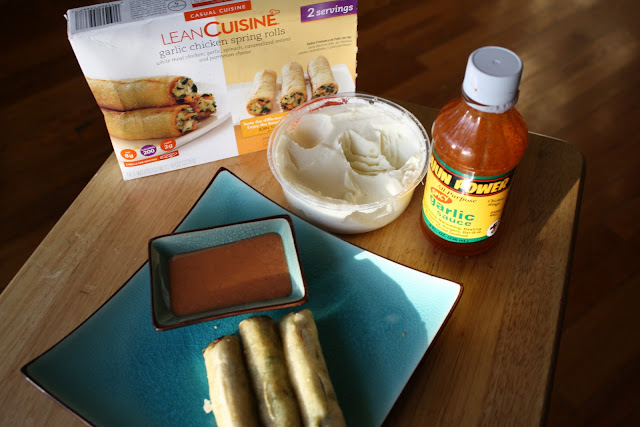 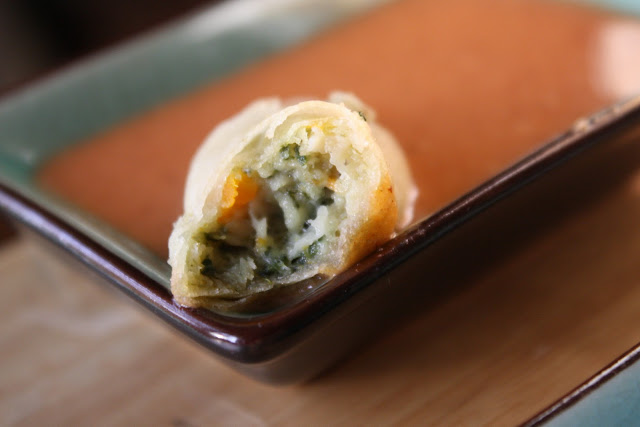 Lean Cuisine garlic chicken spring rolls and a mix of Zankou garlic sauce and the Cajun Power spicy garlic sauce that Tracie gave me last fall.
I have never eaten something and said "This has too much garlic flavor".... but this is as close as I will ever get. 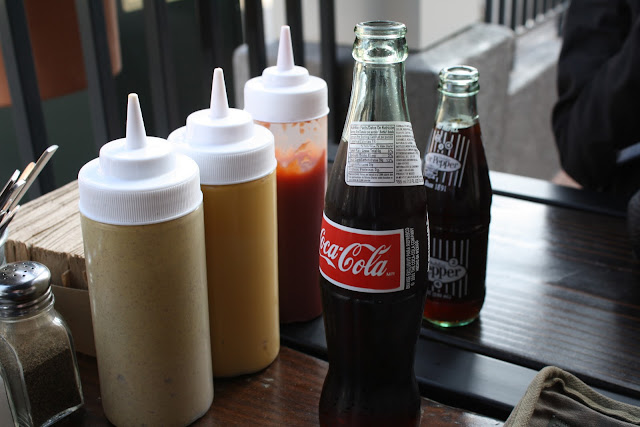 After doing a lot of errands Saturday morning, it was time for lunch. It was a nice day - not in the 80s like it has been lately, but a very pleasant, sunny day. I suggested sitting on the patio at Dog Haus Biergarten, and Elizabeth said that was fine with her. She wanted an RC Cola but the guy there told me they discontinued RC in glass bottles. So we got a Mexican Coke and a Dublin Dr Pepper. 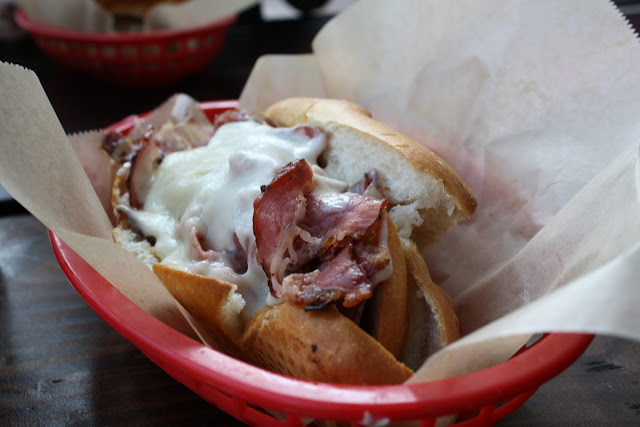 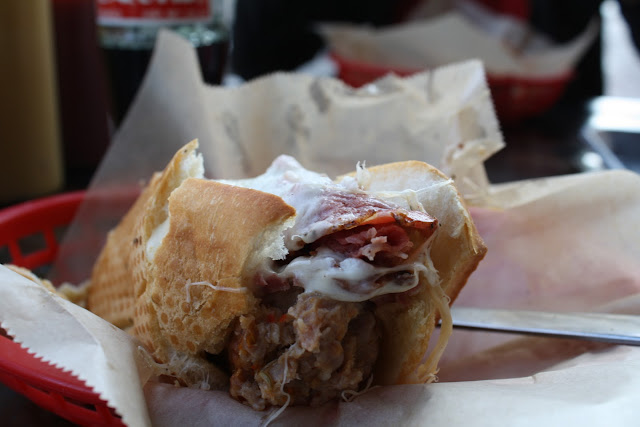 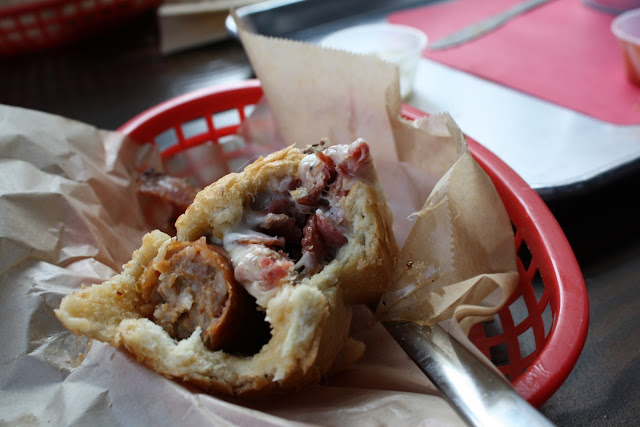 And I ordered "The Fonz" - a spicy Italian sausage on a French roll, topped with pastrami and melted mozzarella. I certainly liked it, but it was probably my least favorite thing I have ever had at Dog Haus. Unlike most of their dogs (and all of their burgers), I could easily replicate this at home. Still, I ate almost all of it and was quite happy.


Too Lazy To Cook Breakfast 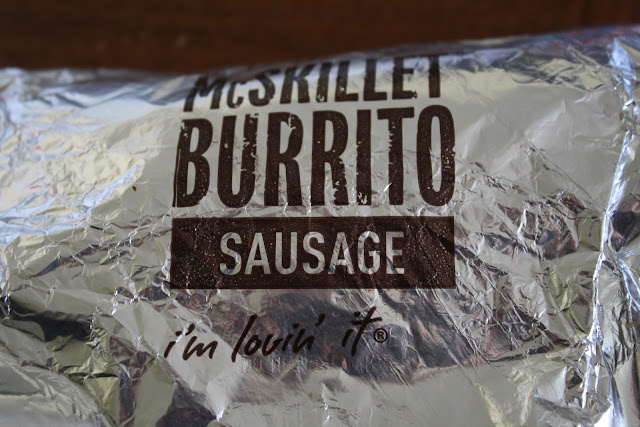 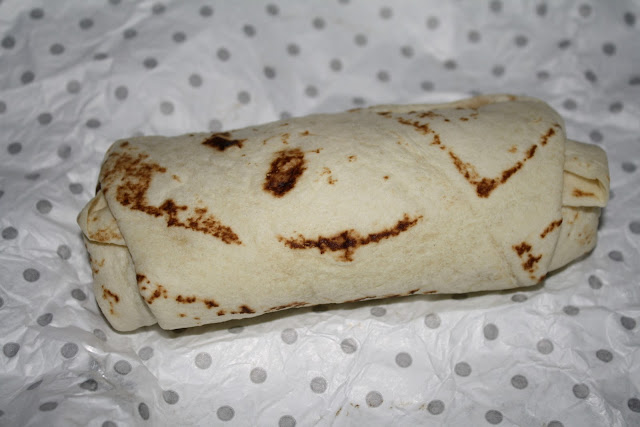 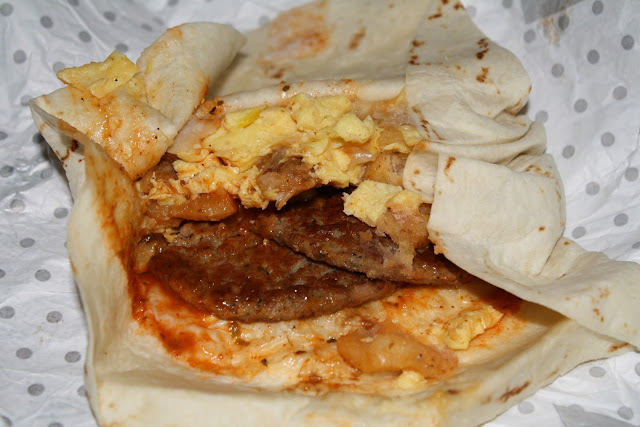 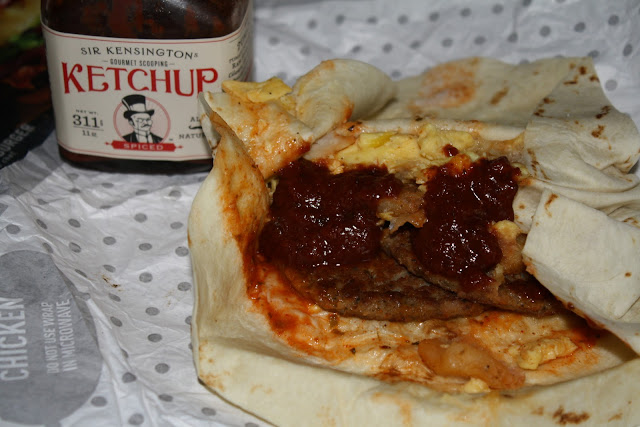 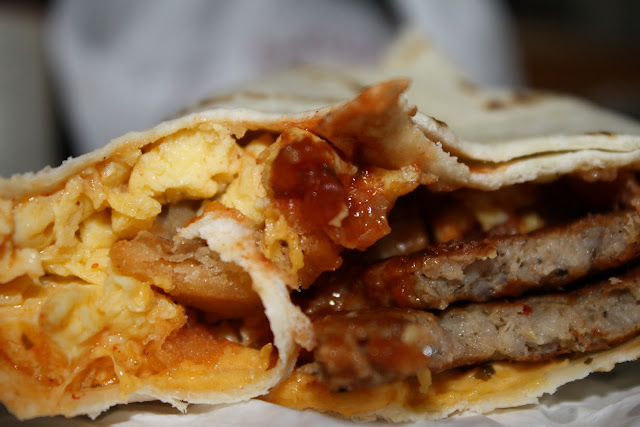 I had my first McSkillet Burrito yesterday: sausage, eggs, cheese, and potatoes. It was... well, exactly what you'd expect. Nothing very good or flavorful, but it was much more filling than I expected, and the addition of Sir Kensington's provided some extra flavor to tie it all together. 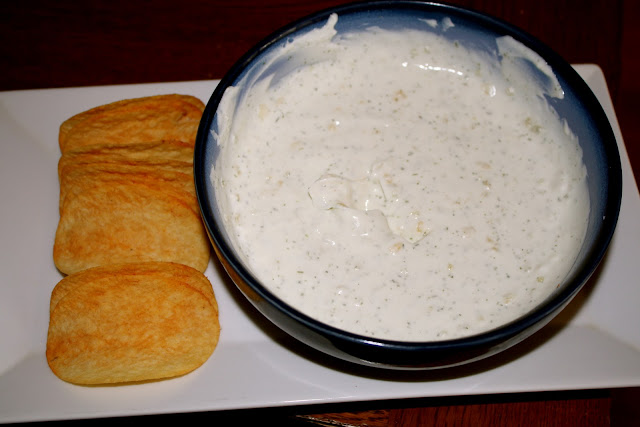 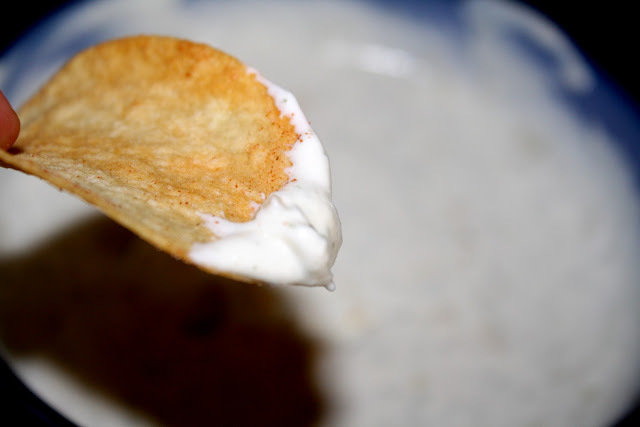 For the first time in months - actually, probably all season - I set aside a Sunday afternoon to watch an NFL game. I've certainly watched entire games this season, I'm just saying I haven't planned in advance to watch one. But I had a hunch the Denver-Pittsburgh game was going to be a good game. (Although I won't lie to you: I didn't think it would be that good, and I did not see any way whatsoever that Denver would win.)

I got some Ragin' Cajun Pringles at the store and made myself an onion dip. It was fine. Pretty boring, actually. I guess I don't go all-out to make snacks for exciting NFL games (like this one) like I do for boring college games (like every single UCLA game).


This Is For My Homies Who Ain't Here 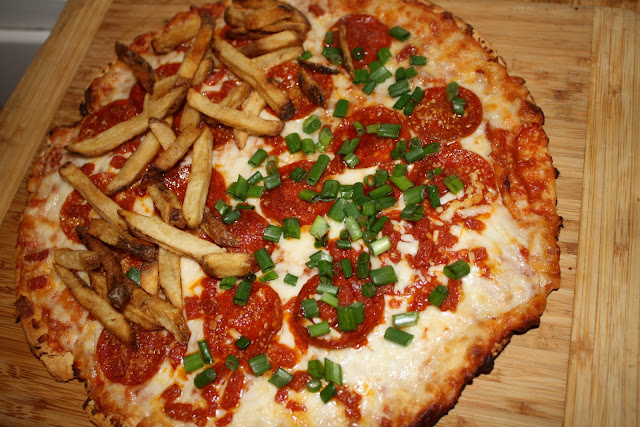 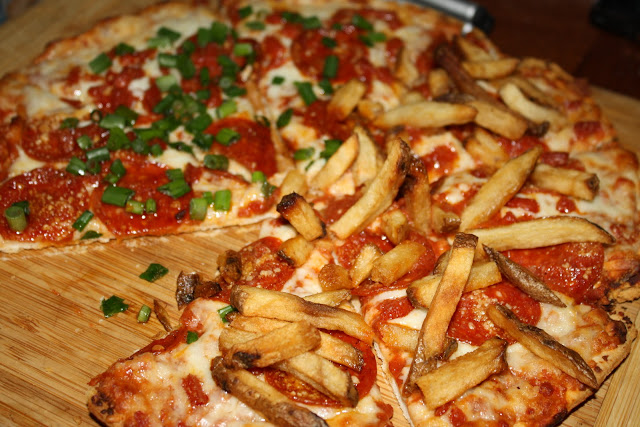 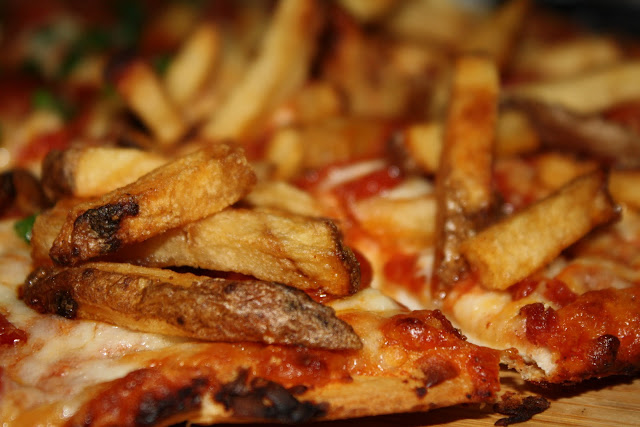 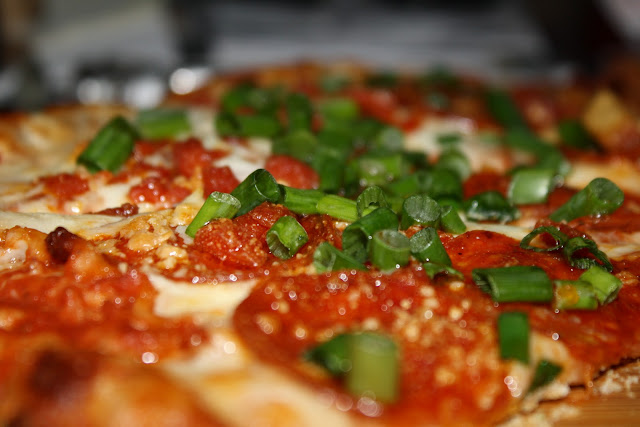 The other day I was emailing with a good friend of mine, describing (well, whining might be a more apt verb) four meals I have had in the last month at restaurants in Old Town. All four meals were disappointing and all were at restaurants that opened in 2011. I lamented those days when I used to be able to choose between La Fornaretta, Kuala Lumpur and Breadcrumbs, three of my ten favorite restaurants that I ever encountered in Pasadena.

I baked a frozen pepperoni pizza for dinner and decided to make it an homage to La Fornaretta and Breadcrumbs. (I couldn't do anything with Kuala Lumpur, as they did not serve pizza and at any rate I did have any mee goreng or leek dumplings lying around the house.)  La Fornaretta served my favorite pizza I have ever had in Pasadena, the Mt. Etna: pepperoni and green onion. Breadcrumbs had a "french fry pizza" that was much better than it sounds, with fries and prosciutto on it.

I certainly preferred the green onion half of this pizza.
Posted by JustinM at 10:00 AM

Do you think Tebow is good?

He's a starting NFL quarterback, so I think it speaks for itself. Do I think the Broncos have a chance at New England? No. But I didn't think they had a chance against Pittsburgh, even with the Steelers being banged-up, so as usual with the NFL, I have no idea what I'm talking about.

Love those daring dips, although I have my doubts about Lean Cuisine. It puts you in a starving 2 hours later. Fries on pizza! Well, why not!

Double disclosure: 1) There are always at least a couple Lean Cusines in the freezer for those days when Elizabeth doesn't have anything better to take to work. I was in a lazy mood the other day so I just zapped three of the spring rolls.

2) The fries (leftover from the Dog Haus lunch) on pizza were nowhere near as good as the old Breadcrumbs pie, and after eating two slices that way I took them off the remaining slices. The pepperoni/green onion was much better.

How are those spring rolls? I've always stayed away.

In Romania (don’t ask) they put ketchup on pizza. I can’t quite remember but I don’t think they even use any pizza sauce, just a ketchup bottle on the table. It’s a little disturbing at first but after a few months it becomes all that you think about and you’ll take a 45km bus ride on the weekend just to have a ketchup flavored pizza for lunch. In this case, on a French Fry pizza, it would make perfect sense.

Aah, Sir Kensington strikes again! I think he should be Knighted.

Jessica: Better than I expected but not anything I would call "good." If they're on sale for $2, you could do worse.

Mindful: You can't make a statement like that and then command me not to ask. Why were you in Romania? And would you ever have one again or was it just because of the whole "When in Rome" mentality. Also, we should see if we can get Murph to puke by telling him that anecdote.

Nosh: It would be cool if there were a ketchup guild and I could get knighted for my support of Sir Kensington!

Okay, I was there in 2002 for about five months as part of an environmental volunteering program. I learned the language and everything and was planning to stay longer but then decided it was a better deal to came back and “go around” with Hil.

We should definitely serve Murph a pizza with ketchup for sauce and see what unfolds. And, yes, I’d eat a ketchup pizza again. I like ketchup. I like mustard, too. Mustard on leftover pizza is great.