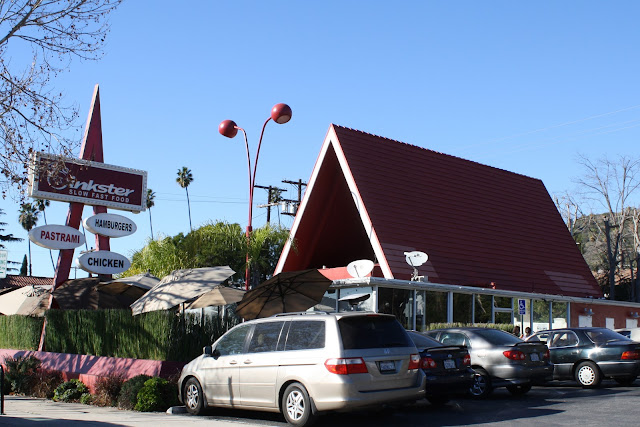 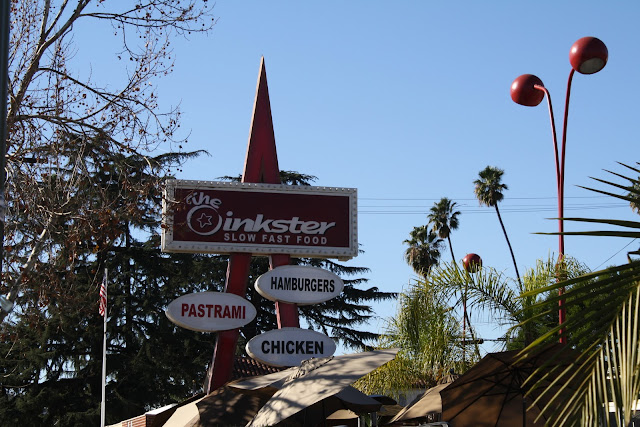 Man it was hot Wednesday. I think it was 86 in South Pasadena. According to the Times it was 91 in nearby San Gabriel. I went over to Eagle Rock with Tim to pick up supplies for his next batch of home brew - this one will have an even better name than the Henry Porter, but it won't be ready for a few weeks - and we decided to get lunch someplace where we could sit outside. The Oinkster is just around the corner from the homebrew shop.

I hadn't been to Oinkster in just over a year. I was disappointed with the place on my last trip but that hardly seems fair; it was so crowded that I should have just gone elsewhere. It was December 30th and lots of people had the day off, to say nothing of all the fans of Wisconsin and TCU who were there, no doubt having heard about it on Food Network or one of the other places where it has been featured. It took 40 minutes to get my food that day and the food was not up to its usual quality (or at least the quality I remembered from the old days when it opened and I used to go there much more frequently.) So I knew that wasn't the best day to judge it and I was happy to try it again.

It was again crowded, but at least it was manageable and we were able to take seats outside. 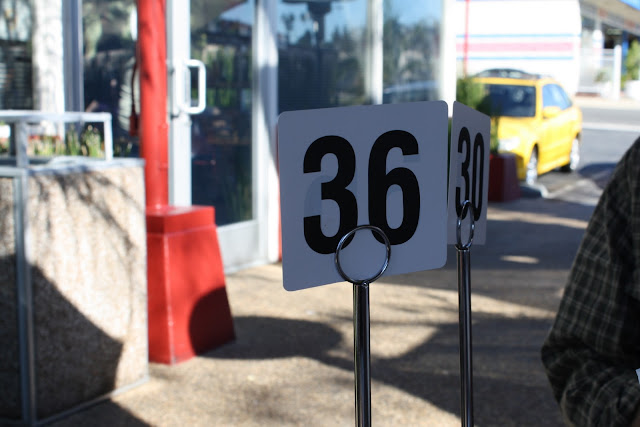 I ordered right before Tim. I was number 36; he was number 30. Whatever, as long as they get it right. It took exactly 20 minutes to receive my food. By no means is this a ridiculous wait, but it was obvious from looking at the cooks and the runners that they could have used a couple more employees on this day. (Long before Guy Fieri - the 43 year-old guy with bleached hair and a sweatband on his elbow - featured the place on Food Network or Bill Simmons - the 42 year-old guy who peppers his writing with 90210 analogies - called Oinkster the best sandwiches in L.A., the lines weren't nearly as long. I used to order, receive my food, eat and be out of there in less than 30 minutes.) 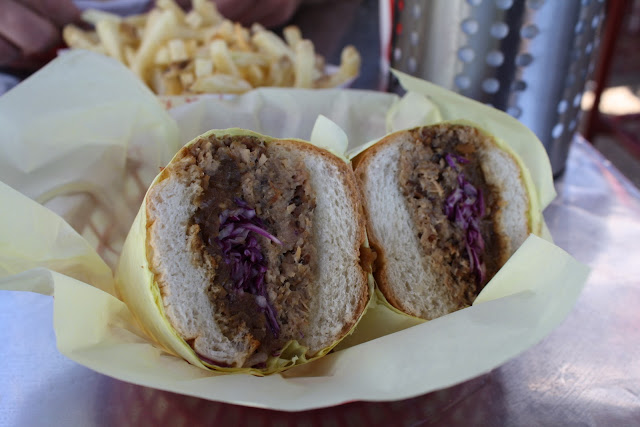 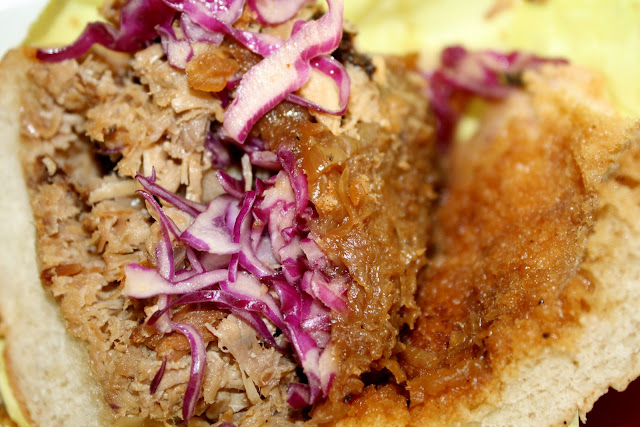 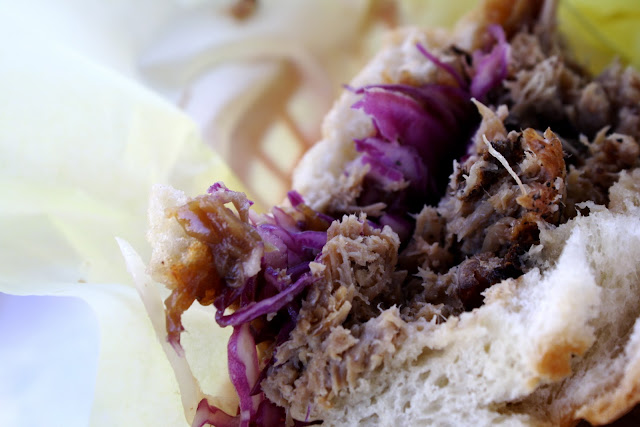 In 90 percent of my trips here I have gotten the BBQ Pulled Pork Sandwich, and this time was no exception. The pork is served on a roll with red cabbage slaw, caramelized onions, and sauce. Every once in a while you get a sandwich that is dry - although when that happens I just add more vinegar sauce to it - but this time the sandwich was amazing. 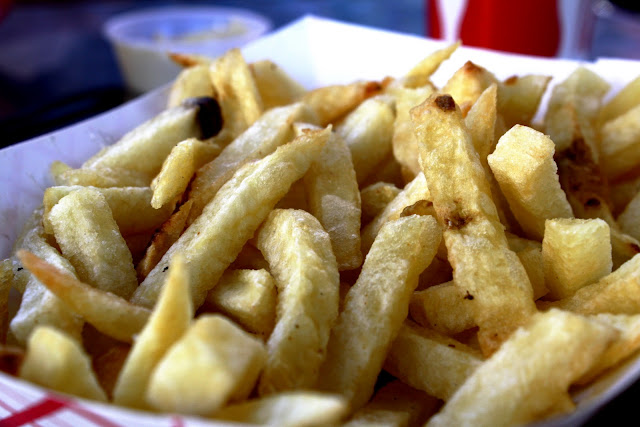 I get the large order of fries. Always too much food - but that's the point, it ensures that I will only eat half my sandwich. And Oinkster's sandwiches taste better after a night - or sometimes just a few hours - in the fridge. Most times (like this one) there are quite a few fries to take home, too. They reheat beautifully in the oven, but they are also the only fries I can remember eating that I enjoy cold as well. 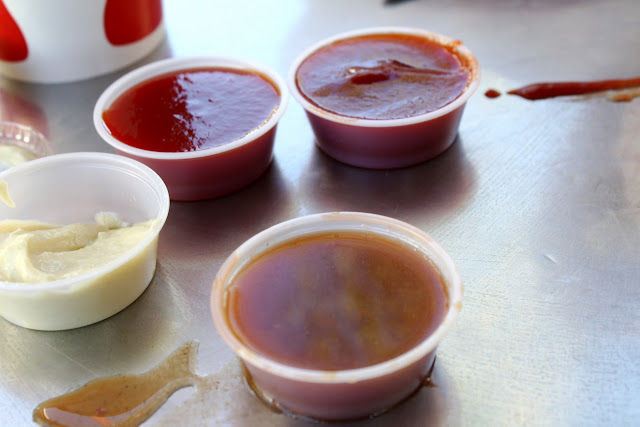 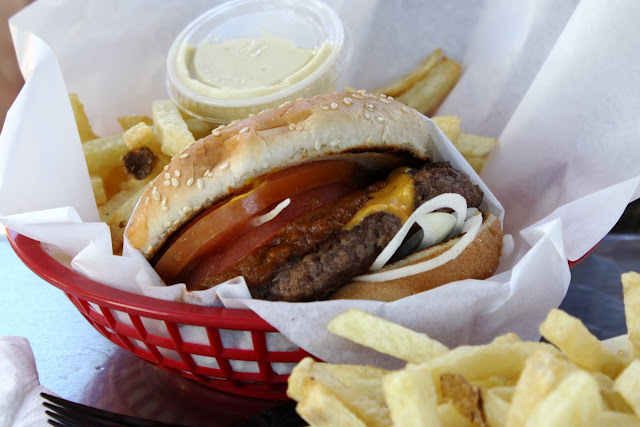 Tim had the chili burger and he said it hit the spot.

This trip to Oinkster was good enough to confirm that my last, disappointing trip there was probably an aberration. I will try to return more frequently.
Posted by JustinM at 10:15 AM

I have heard so many things good and bad about the place. I do want to go though and these pictures are amazing!

i like guy, but when they show him wearing flip flops in the kitchens of all these restaurants he visits, its like aw hell nah

I understand both people who love AND hate Guy. It's most accurate to say that I "tolerate" him because I love the format of DDD and so much of the food looks awesome. I can't help but think how great the show would be in the hands of someone like Alton Brown, who is more interested in informing people than showing off how hip he is, but that's life.

Ha! Had you read his column today before you wrote that about 90210?

No, I wrote the post Thursday night. But come on, it's Bill Simmons. Isn't there always like a 40% chance he will write about 90210?