Legend holds that the cheeseburger was invented in Pasadena in 1922. I don't know if this is an established fact, and to be honest I don't really care. (Curiously, a restaurant in Louisville, Kentucky claims to have invented the cheeseburger a full twelve years later. I realize media back then was primitive by today's standards, but isn't this something that can be verified? It's not like we're talking about twelve hours later.) At any rate, Pasadena Cheeseburger Week starts Sunday and, for some reason, runs for six days.

Since I have eaten several hundred cheeseburgers in Pasadena, I thought I would give you a rundown of my ten favorite.

I have only two rules. 1) It has to be a regular-size burger with cheese. So something like the duck sliders at Kings Row don't make the cut, even though they are being featured by the restaurant as part of Pasadena Cheeseburger Week. Whatever, it's my blog so these are my rules. (Also my beloved turkey burger from Fatburger can't be included, as it doesn't come with cheese.) And 2) It has to be in Pasadena. Even a city as close by as South Pasadena doesn't count.


10) The Charburger at The Habit Burger Grill 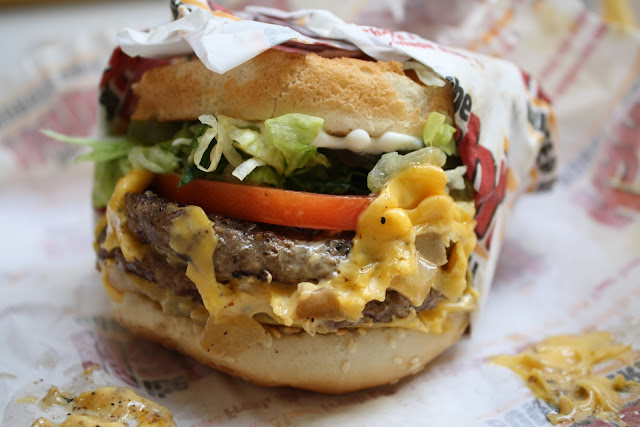 This is the new kid on the block - The Habit opened less than two months ago in Pasadena, but I'm already willing to place it on the list. (I bumped the Kobe burger at Cafe 140 South from the list to make room for this newcomer.) 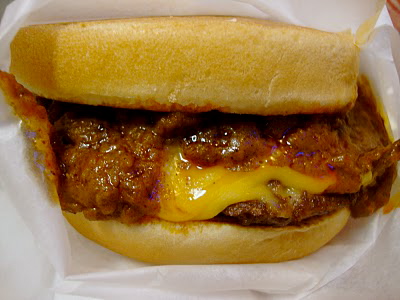 I like to order my Tommy's burger with extra chili and extra pickles. It is messy - the messiest chili burger I have ever had. But it's so good I don't mind.
8) Bobby's Place 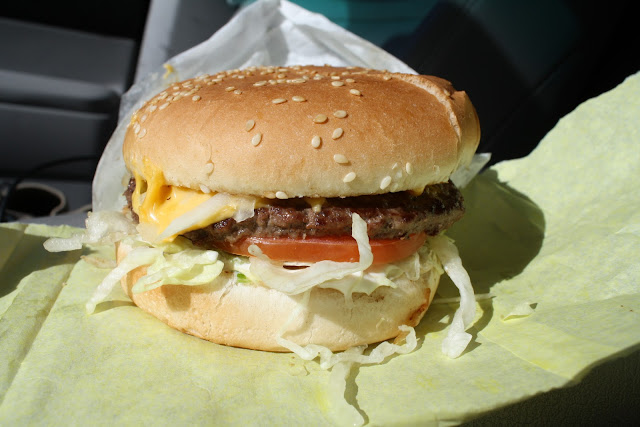 For my whole life, until last summer, Bobby's Place was known as Rick's. But that's the only thing that has changed. It was bought by some of the employees so all the same people work there and they still serve the same food for the same reasonable prices. And hell, everyone I know still refers to it as Rick's.
The burger at Rick's is a classic greasy fast-food burger. The total here is greater than the sum of its parts: the meat is fresh - Rick's is usually busy so you don't have to worry about them not turning over their ingredients - and the lettuce, pickles and cheese all work together perfectly. (By the way, I just realized I wrote those last two sentences still calling the place Rick's. I thought about changing them but decided that proves my point about everyone still calling it Rick's.) The $5.95 burger, fries and drink combo remains one of the better deals in town.
I don't get the burger here anywhere near as much as I used to (well, I don't eat here nearly as much as I used to, and their tacos are my standard order these days) but every once in a while I grab one and I remember how much I enjoy it.
7) Dry Aged Burger at King's Row Gastropub 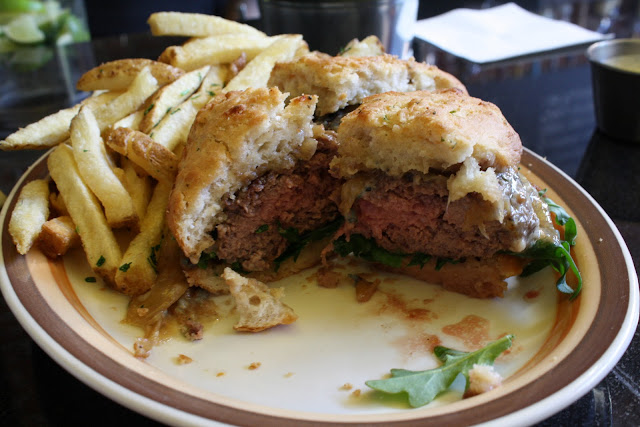 King's Row serves a ribeye burger, thick and almost always cooked the way I order it (medium-rare) on a fresh bun that is one of my favorite buns in the city. The meat is topped with St. Agur blue cheese and Tillamook extra sharp cheddar. King's Row has changed their prices - in the 9 months they've been open - more frequently than any restaurant I have ever seen, so I can't be completely sure what it costs now, but on my last visit it was still less than ten bucks during happy hour.
6) Kobe Bistro Burger at Original Tops 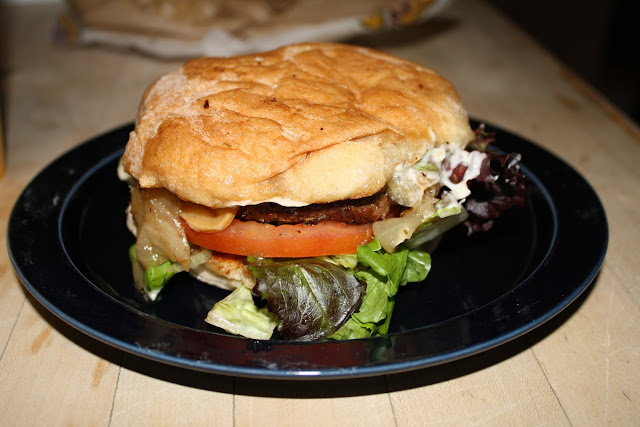 Original Tops is a fast food joint but their Kobe burger is the equal of most restaurants in town and only costs half as much. It's a 1/2 pound of American Kobe beef with smoked mozzarella, caramelized onions, tomato, mixed greens and herb mayonnaise. I try to order it without the mayo, which overpowers the taste of the beef and onions, but even when I forget it's still delicious.
5) Holy Aioli at Dog Haus Biergarten 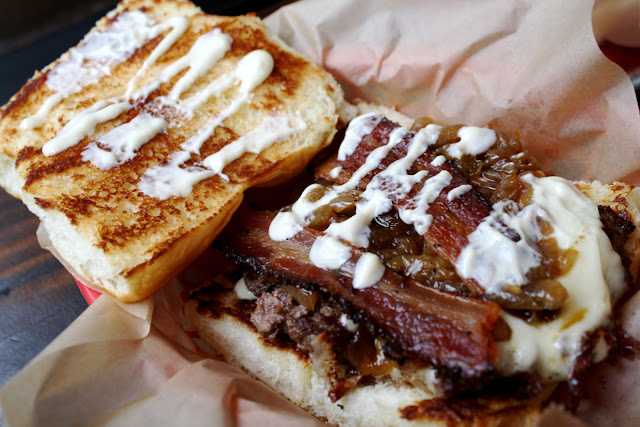 The original Dog Haus has been open on Hill for more than a year but in all of my trips there I never tried anything but the hot dogs. They're that good. But when they opened their Old Town location - the Biergarten - I tried a burger for the first time. It was magnificent: in addition to the patty there is melted, gooey American cheese, crisp bacon, caramelized onions and aioli. I gave Elizabeth a bite of my burger on this occasion and now that's all she gets at Dog Haus. 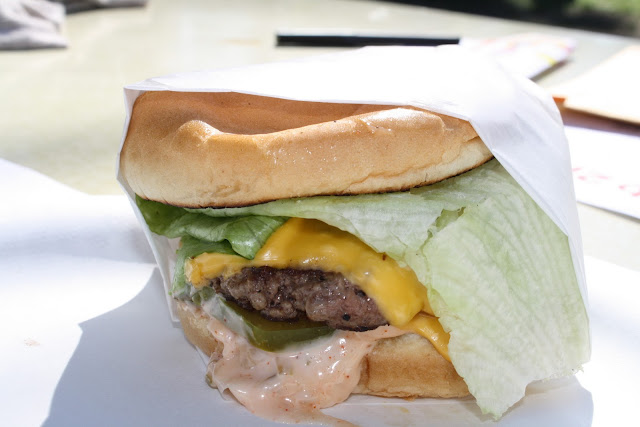 There are plenty of pretentious places in town where you can get 14-dollar burgers and the servers will pretend like it's fine dining. That is not what Pie n Burger is. It is a lunch counter with curt service and a simple burger, a little sloppy and deliciously juicy.
3) Sirloin Swiss Burger at Jack in the Box 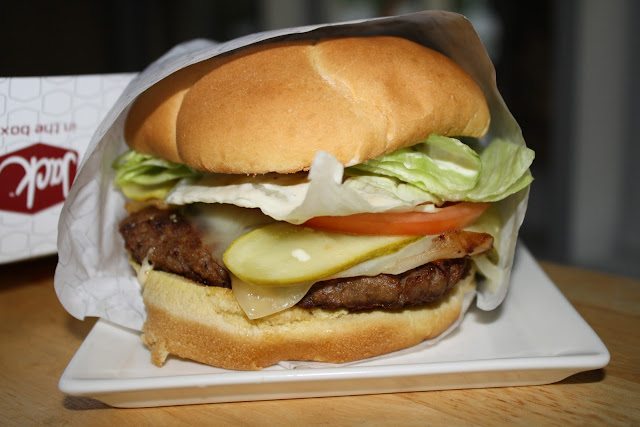 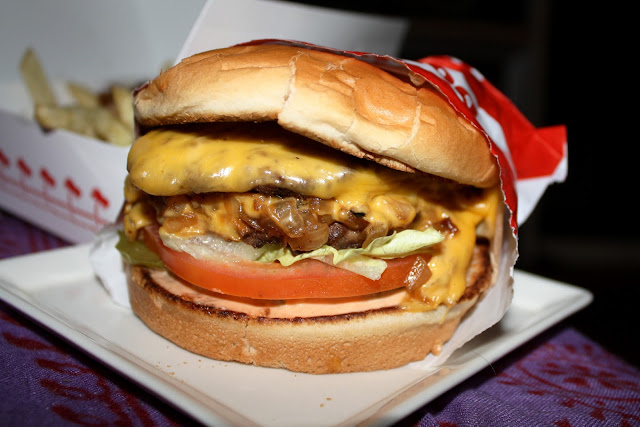 There is no burger on the list - including the two choices ranked higher - which I have eaten more than this. If you're interested enough in burgers to read the post down to this point, I seriously doubt I can tell you anything about a Double-Double that you don't already know.
2) The G.S.T. Burger at Green Street Tavern 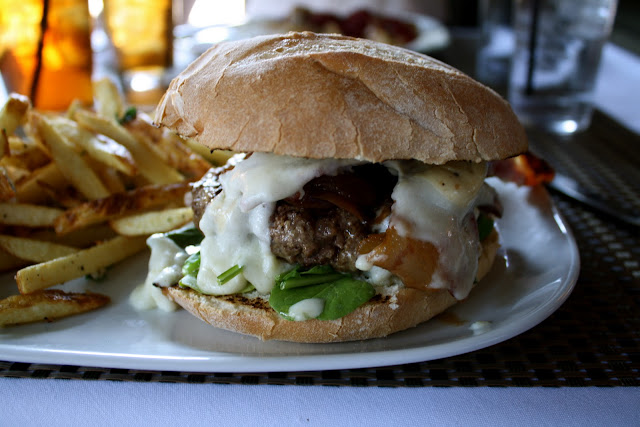 Green Street Tavern is the restaurant in town that makes a burger closest to the idealized "perfect burger" that I am always trying to make at home. To start, they use a telera roll, my favorite burger bun. They use ground Black Angus beef, homemade bacon, aioli, arugula, and a Roquefort-gruyere fondue, more than is probably necessary. I have had this burger many times over the years and not once has it been anything but fantastic. 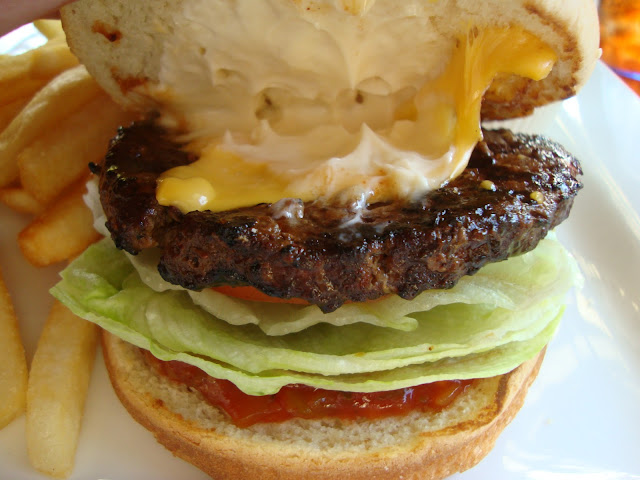 I don't want to give the impression that I think Hutch's burger is necessarily the best of this list, because the beef is not in the top half of these burgers I've written about. And the slice of yellow cheese is pretty bland. But the whole thing just works together: the relish, the always-crisp lettuce, the lightly-grilled bun, and the delicious barbecue sauce. I have been eating these burgers for literally as long as I can remember. There is not another burger in Pasadena - there is not another burger I have had anywhere in the world - that I love more.
Posted by JustinM at 10:00 AM

You literally made me say out loud "what the hell?" in my empty office when I read the Jack in the Box burger. The Charburger looks incredible. Nice list.

Sweet list of Burgers..look good! My favorite food is probably a good burger so..this is up my alley!

I wish I didn't have to meet my team for lunch today. I'll have to wait until suppertime for a Hutch's Burger.

i read your blog so much i knew hutchs would be first! awesome list pp.

Great list! I want the King's Row. I love the patty to everything else ratios. More patty less other stuff.

Thanks for the attention for Pasadena Cheeseburger Week. It's six days because restaurants are generally busy on Saturdays and a promo can get in the way of regular business...

You can go online and vote for your favorite in lots of categories (including sliders) at www.pasadenarestaurantweek.com/home/cheeseburger-week .

Sorry not every place in Pasadena that serves a burger decided to participate, but the ones who did are listed on the website. Even if they're not, we know you can find a great burger in Pasadena.

Thanks Justin, you brought a tear to my eye.

The hamburger was created in Seymour, WI in 1885.

As with the cheeseburger, I don't care. If a place can prove they invented something, I'm interested. If a bunch of different places claim they invented it - like the hamburger, cheeseburger or French dip - and there is no way of proving who is correct, then I am not interested.

From the names of these restaurants, I have to surmise the best burger, Dollar for Dollar, wood be the In-N-Out. The best value.

I don't even want to know how much some of these other joints charge for just a cheezeburger!

If you think the Pie n Burger/Red White + Bluezz/King's Row set sell pricey burgers, you should see some of the places I've come across in NYC. $20 burgers that don't hold a candle to any of those Pasadena places.

Why isn't the Dog Haus burger not listed here? While Dog Haus is sort of marketed as a dog and sausage place, I find that they have one of the best cheese burgers around! Ive trued many fancier gormet burgers, and always come back to Dog Haus for their burgers and not their specialty dogs.

Give it a go and post your thoughts.
-SidekickChuck

I agree, they have great burgers. That's why I listed one of them at #5.