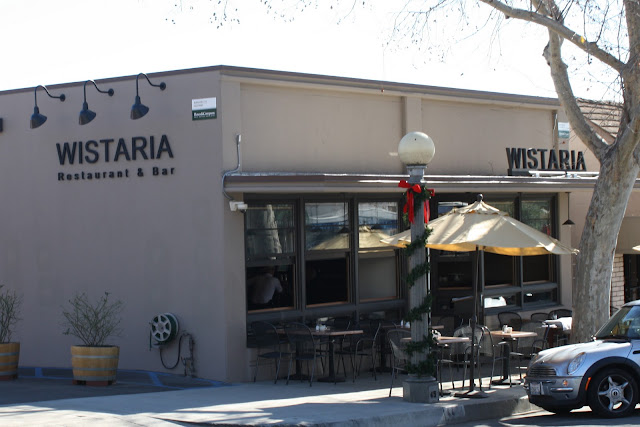 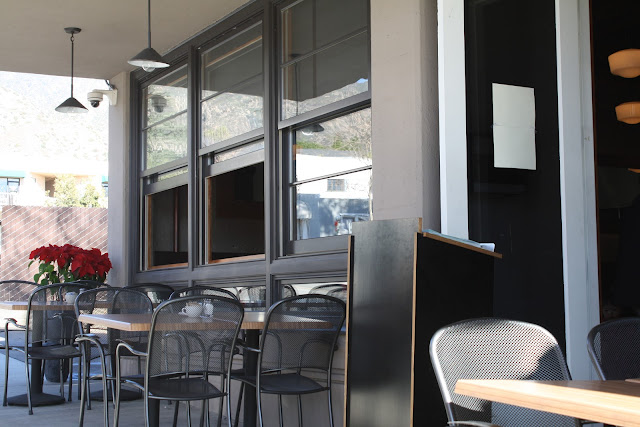 For those of you who do not know me, I grew up in Sierra Madre. For those of you who are not from Southern California, Sierra Madre is a small town in Los Angeles County, wedged up against the San Gabriel Mountains. There are only 10,000 residents and the city takes up less than three square miles. There is not a single traffic signal in town. It has the only volunteer fire department in the Greater Los Angeles area.
The town is also home to the largest blossoming plant in the world, according to the Guinness Book of World Records: a 117 year-old wisteria vine. Even Huell Howser has done an episode on it. So when a new restaurant opened up in town last year, it was not much of a surprise to see it take the name Wistaria. (There are two accepted spellings of the word.) For months I did not go, but several people I know - including my parents - went and enjoyed it very much. 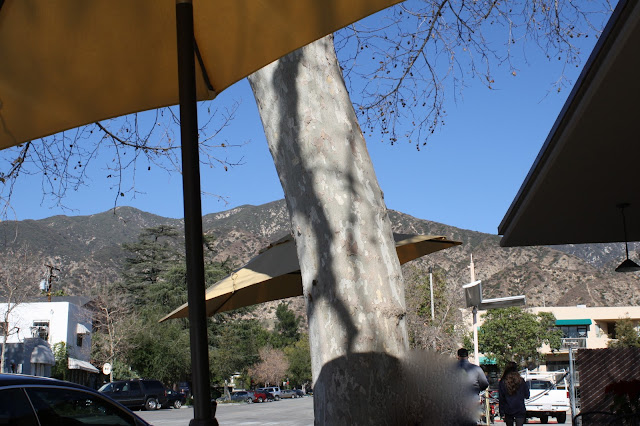 Like many restaurants in Sierra Madre, Wistaria offers sidewalk tables with views of the mountains. On a recent warm afternoon, Elizabeth and I stopped by for lunch. It was an easy call to sit outside. Wistaria is owned by the same people who own Mike & Anne's in South Pasadena, a restaurant for which I do not much care. Fortunately, Wistaria retains all the things I like about Mike & Anne's (meaning the food) but the vibe is nowhere near as cold. 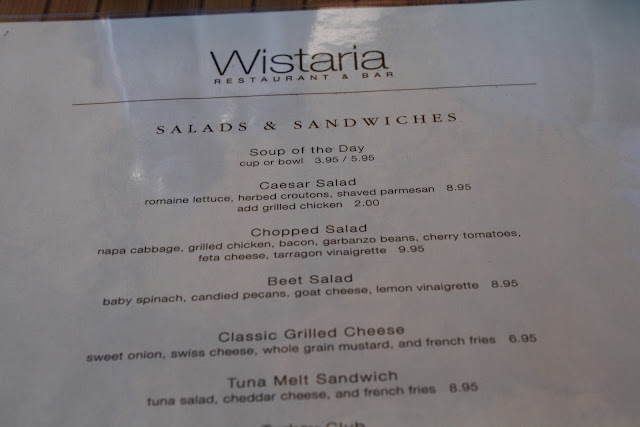 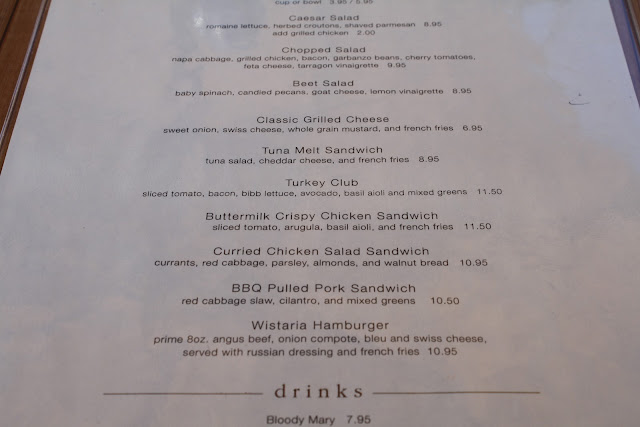 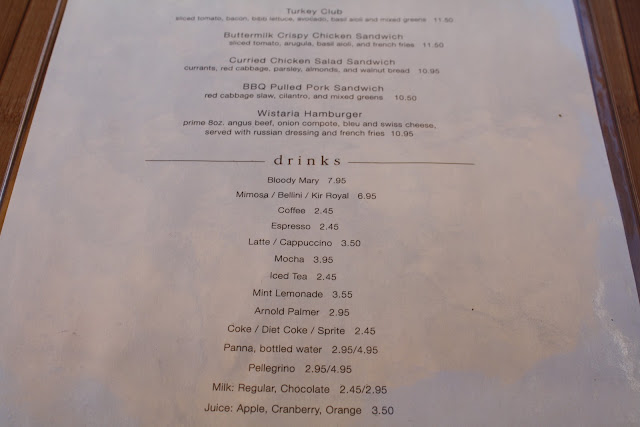 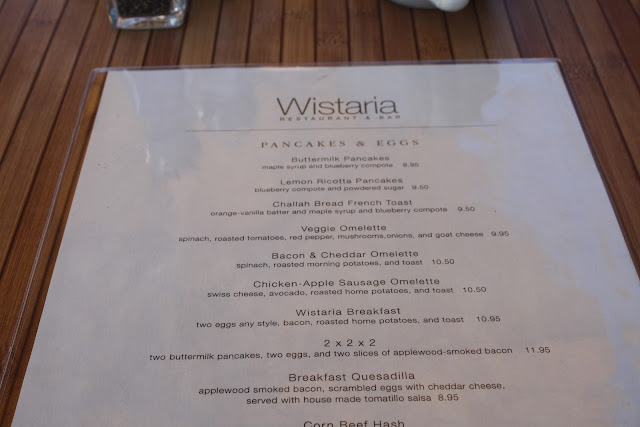 The menu during the day contains both breakfast and lunch items. The breakfast quesadilla in particular looked good to me, but I was in more of a lunch mood. 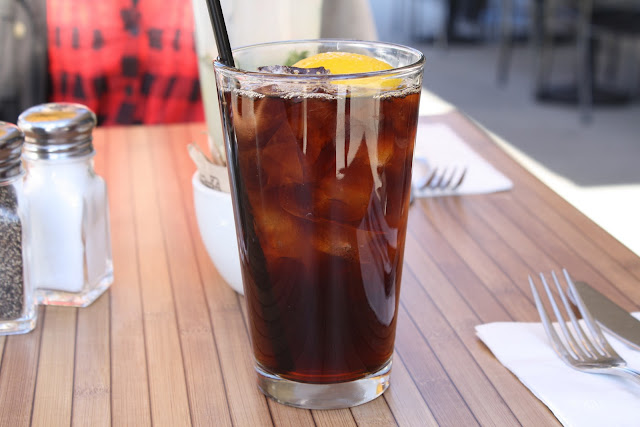 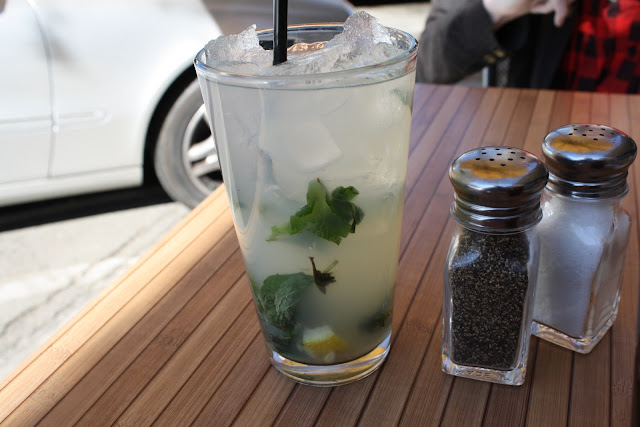 The mint lemonade is the same drink Elizabeth had at Mike & Anne's a few years ago that she loved. (You better really like mint to enjoy this lemonade.) 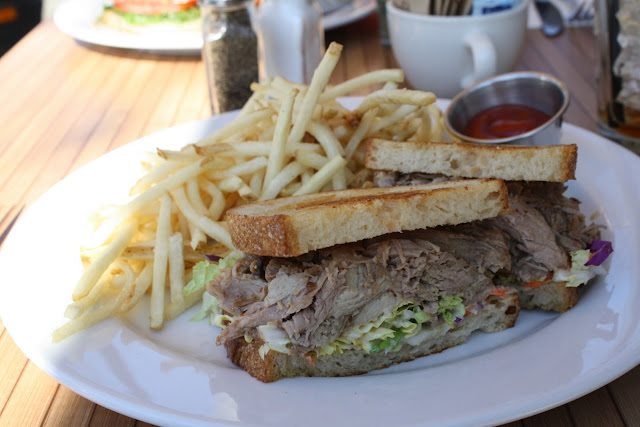 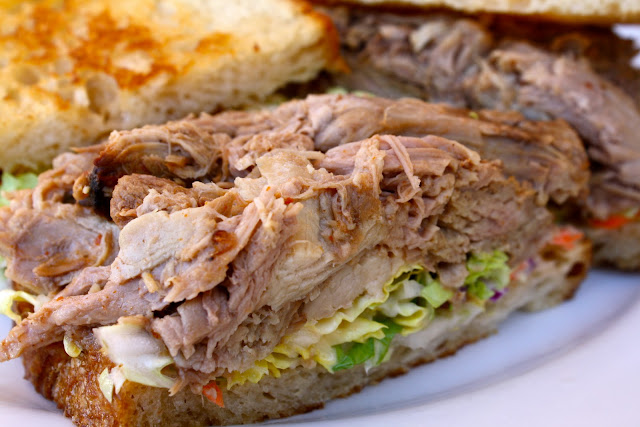 I opted for the BBQ Pulled Pork Sandwich. The pork was moist and flavorful and the slaw had a wonderful vinegary kick to it. I wish it had been served on a bun, or more to the point I wish they had told me that it comes on toasted bread. The bread wasn't bad but it was distracting, which is unfortunate because the quality of the ingredients deserved to be enhanced by a bun that gets out of the way. I don't mind toast when it's enveloping melted cheese; when the contents are pork and slaw, I want to taste those, not bread.

That being said, I ate half the sandwich and really enjoyed it. I could feel myself getting full - more on that in one second - and took the rest of it home with me. After the bread got a little soggy in the fridge, I enjoyed the second half of the sandwich even more.

The reason I only ate half my sandwich at the restaurant was that Wistaria's fries are the ultra-shoestring variety that I love, especially when they are hot and crispy. Which these were. There was a very generous portion of fries and I ate them all, then helped Elizabeth finish hers. 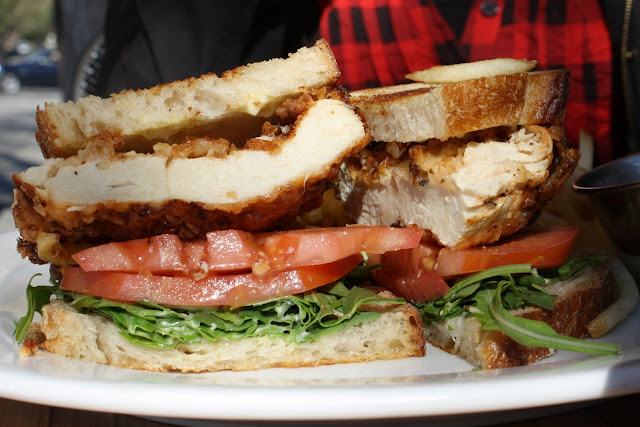 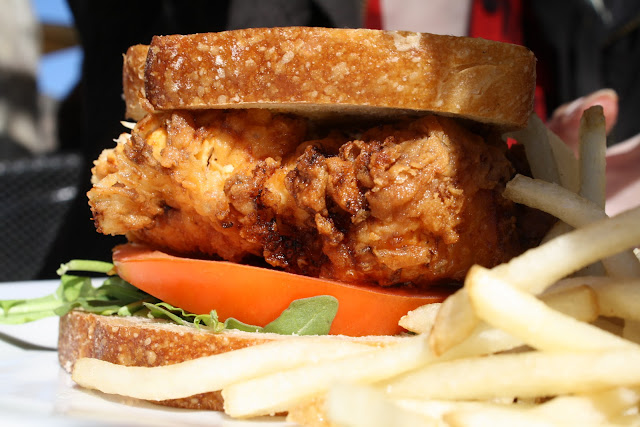 Elizabeth ordered the Buttermilk Crispy Chicken Sandwich. It was big: juicy pieces of chicken surrounded by a crunchy batter. I took a big bite and really enjoyed it. (She, too, could only eat half her sandwich - well, minus the bite I took - however this did not fare as well in the fridge, not surprisingly. But the leftovers were still pretty good.)

Towards the end of our meal, a couple at a table close to us each received hamburgers. The burgers were piled high on golden buns and I had two thoughts: 1) Damn, I wish my pork sandwich had been served on one of those buns, and 2) I have to get one of those burgers soon.

Thanks for the post! It takes me far away from the two feet of snow that I'm looking at & distracts me from the fact that I can't feel my toes :)

I find it strange that they call their buger a "Hamburger" even though it has not one, but two cheeses on it.

Both sandwiches look good and that place it right down the street from my hair dresser. I might have to check it out the next time I go see her.

props to your home town! Yeah, I agree about the bun .. so much better with pulled pork. Those are large portions overall. Looking forward to hearing about the burger.