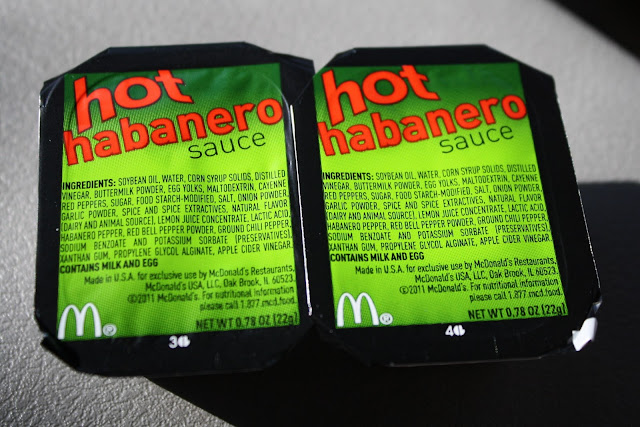 I know I said yesterday there would be a big post today, but the discovery of McDonald's new "Hot Habanero Sauce" has caused me to postpone it. I've been looking for this sauce for over a week, since my brother told me about finding a sign - but not the sauce - at a McDonald's in Glendora. I won't say how many times I went by McDonald's hoping to find the sauce - it stopped being funny and starting leaning towards pathetic at a certain point - but yesterday I went by a different Pasadena McDonald's - actually the first time I have ever visited it. (Before Eliazabeth moved here four years ago, I had never visited a McDonald's in Pasadena in my adult life.)

"Do you have the new habanero sauce?" I asked the girl behind the register.

That was good to hear, but I'm not going to lie: I doubted it. Can you really see a fast food chain - let alone McDonald's - releasing a sauce that actually has a fair amount of habanero in it? I don't know if you've ever taken a bite of even the tiniest piece of habanero, but those little guys are painful. When mixed into a sauce they still provide a very large amount of heat. I've had some at restaurants that are exactly what I want: extremely hot sauce. But I've also had a bad run of luck when it comes to fast food items using the name "habanero" for their product.

Carl's Jr.'s habanero bacon cheeseburger had zero heat to it. I drove down to Orange County just to try the thing and, though I forgot to order a drink with it, it turned out I did not need one sip of any beverage.

7-Eleven's boneless wings with "Asian habanero" sauce actually had a little bit of heat on the back end of each bite, but up front was a sugary, gooey paste that destroyed the spice. And the wings were atrocious.

On the other hand, I find McDonald's buffalo sauce to be quite tasty and surprisingly spicy, so I felt this new sauce at least deserved a try. 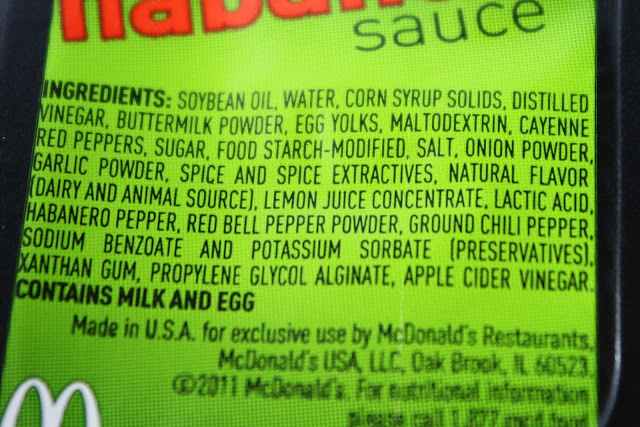 Four of the first five ingredients on the Hot Habanero sauce are the same as the ranch sauce; soybean oil, water, vinegar, buttermilk. (By contrast, the buffalo sauce that I just mentioned lists "cayenne pepper sauce" as its first ingredient.) You can see how far down habanero is listed on the ingredients, which did not give me hope that this sauce was going to be anything spicy. 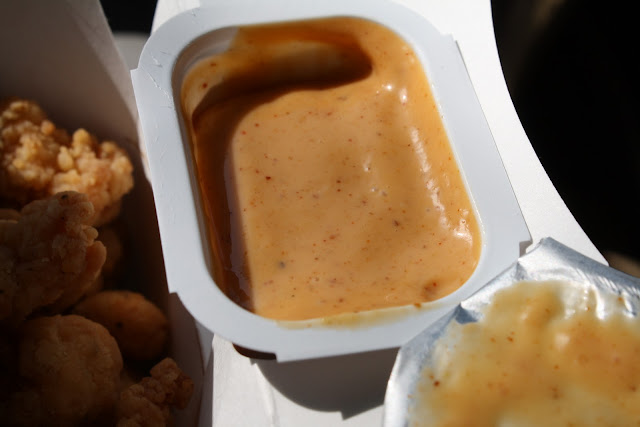 It looks like a ranch sauce with spices thrown in. And the initial taste was very similar to the creamy, rich taste of ranch, a sauce I don't much like. But the spiciness was noticeable quickly. Was it overpowering? Of course not. But it was spicier than I expected it to be. There was none of the extreme heat of a habanero and none of the citrus flavor, but unlike the three items I named above, the heat was most definitely there. 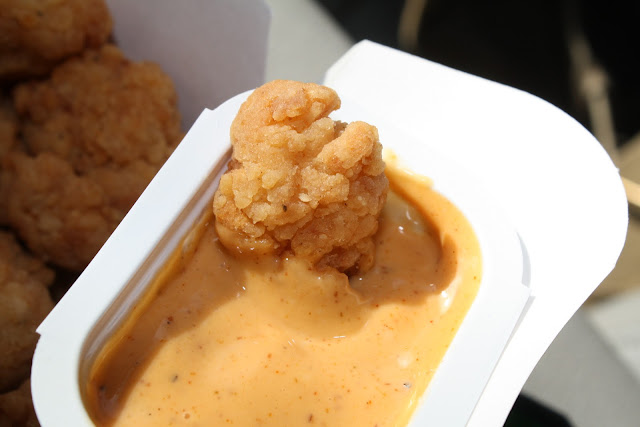 The employee had told me I "have to order a drink" or I would be sorry. I did not. Partly because I didn't think I would need one and partly because I don't like being told what I "have" to order. And it turned out I did not need one.

Like the Chicken McBites themselves, I was pleasantly surprised at the quality of the habanero sauce. Now, my expectations for McDonald's are usually quite low, so it doesn't take a whole lot to pleasantly surprise me, but still, this is the first habanero-named fast food item I have ever had that I enjoyed. 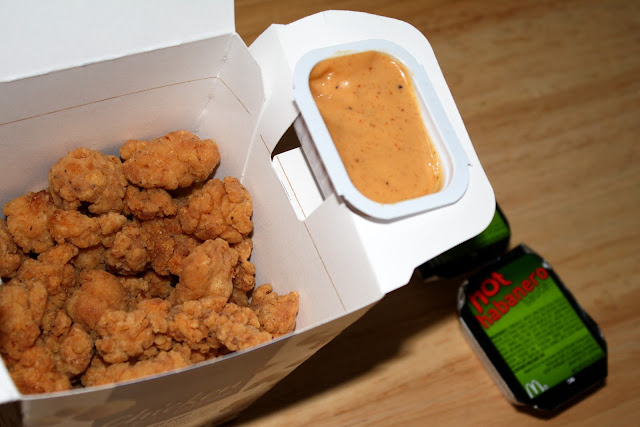 I sent Elizabeth a picture message of the sauce and she said it looked good. I told her it was. When it was time for dinner she said she wanted McBites. So back to McDonald's for my second helping of McBites of the day. We split the "shareable" size McBites. 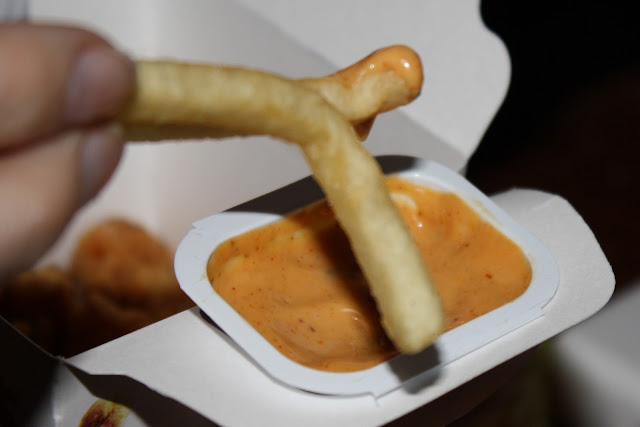 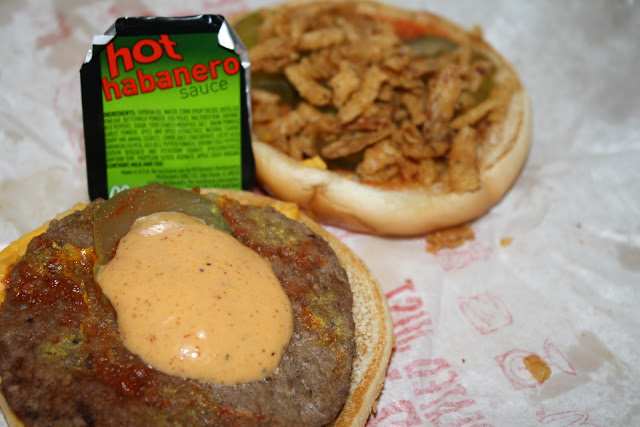 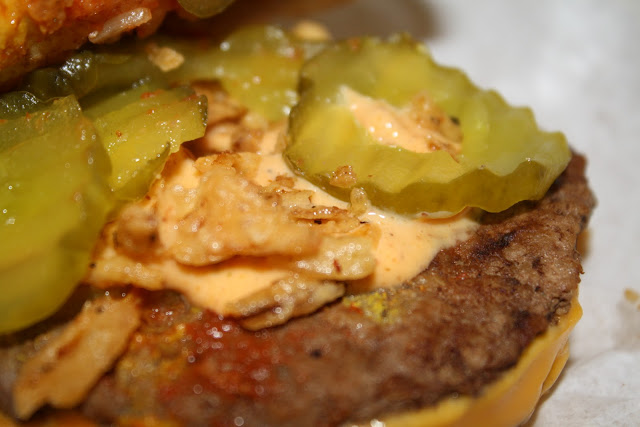 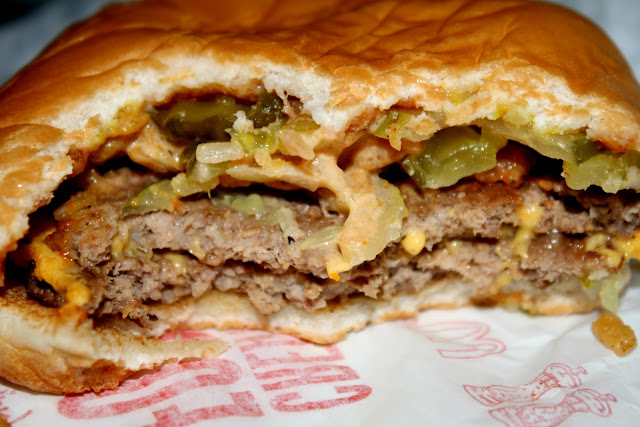 I also decided to try the habanero sauce on a McDouble. I added some garlic-pepper onion strings, a few extra pickles, and half a container of the sauce. It was good, but the sauce definitely complements fried chicken better than burgers.
Posted by JustinM at 10:00 AM

Have you tried the California Pizza Kitchen Habanero Carnitas pizza? I think it might satisfy you.

I have not. I like their salads and a couple of appetizers, but I don't think much of their pizza dough.

I've definitely tried that. I like the BWW sauces but I don't love any of them. The mango habanero is one of the better ones, though.