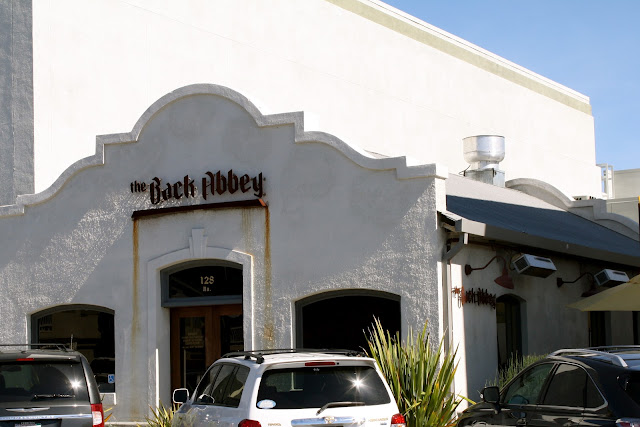 I've known of The Back Abbey for years and heard almost nothing but good things about it. My brother and his buddy Nick, who live nearby, both love the burger. My friend Bryce works in Upland and has told me how good the place is; ditto my friend Tim who knows pretty much every restaurant between Orange County and Ventura.

But I never made the trip out to Claremont. I've heard how crowded The Back Abbey can get, so I never felt the motivation to drive out on a weekend. And weekday lunches usually consist of places closer to home. But the other day I went out to San Dimas to see a project my brother is working on (it's about ninjas, so I couldn't pass it up) and he suggested we visit The Back Abbey for lunch. I said that sounded great. We got there on the early side, just before noon, and there were only a few other patrons. We sat ourselves on the patio. 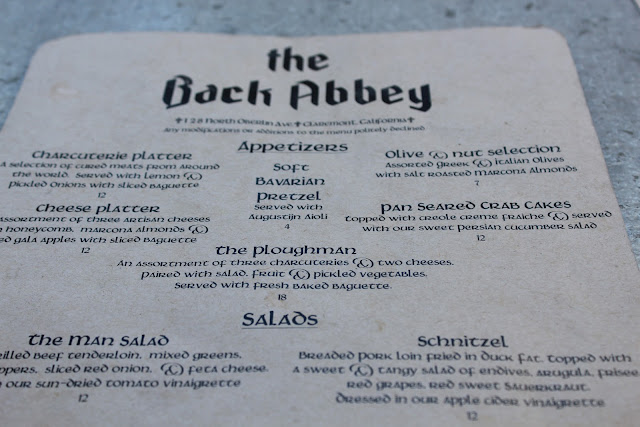 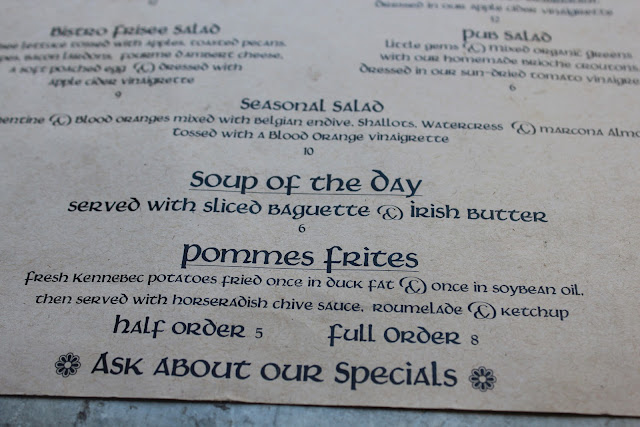 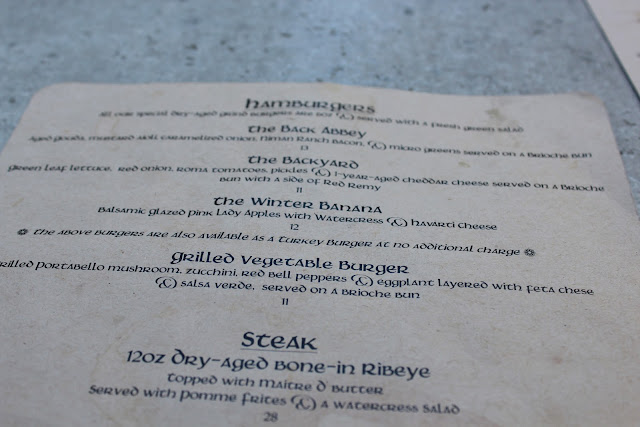 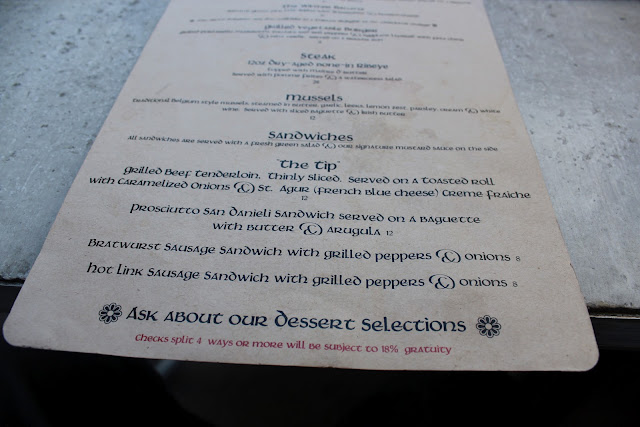 I looked over the whole menu, although I knew exactly what I was going to be getting. 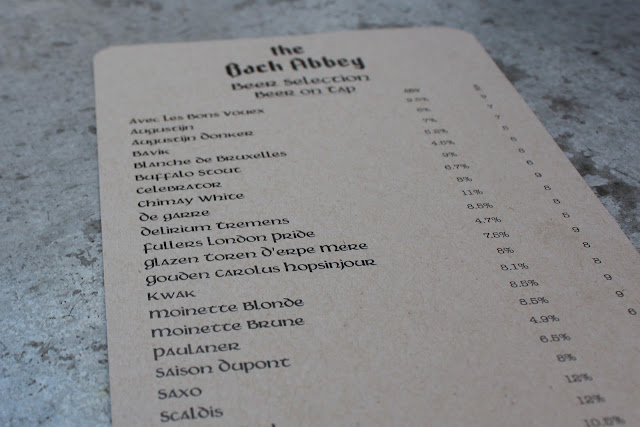 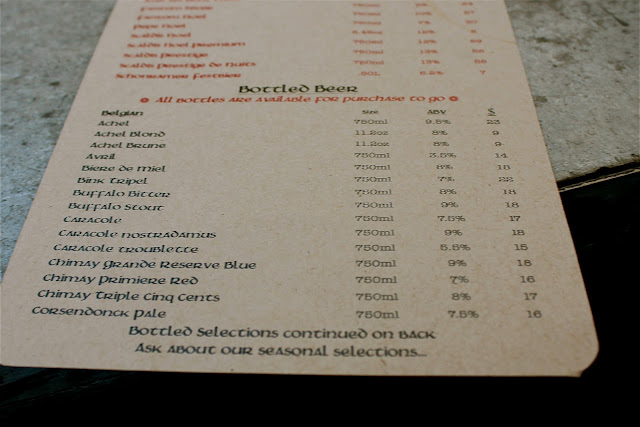 The beer list is almost exclusively Belgian - not terribly surprising, given the name of the place - although I did spy a couple of other things mixed in. 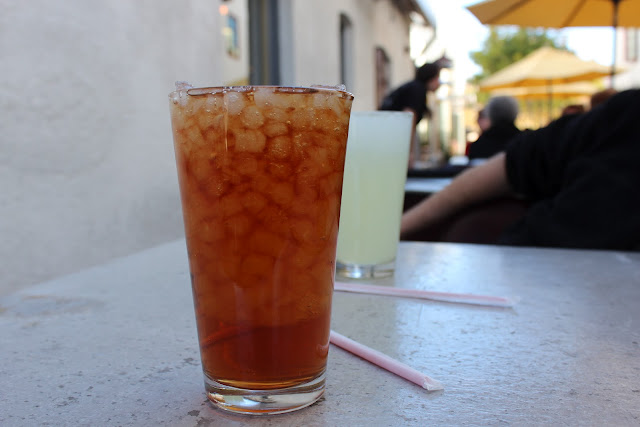 But it was an iced tea day for me. I suppose it's part of getting older, but afternoon beers these days make me want to do one of two things: have another or take a nap. Neither is a particularly attractive option when dining 30 miles from home. 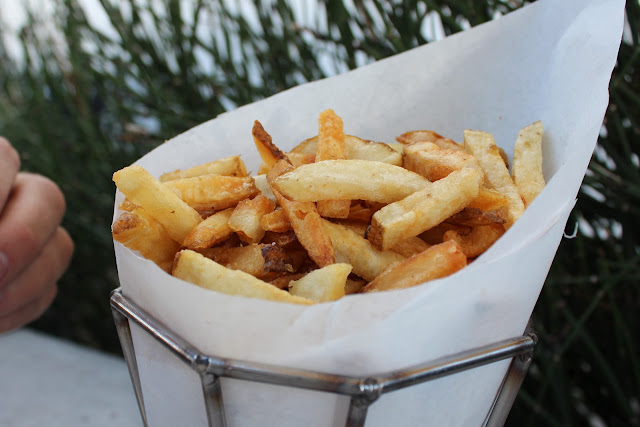 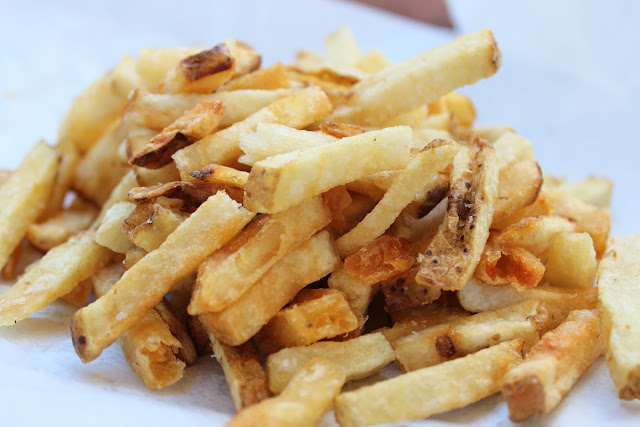 My brother announced that we would be splitting a large order of fries. They came out in a cone and we immediately ate a few off the top, then he unwrapped the paper and dumped the fries out on the table. They were delicious, fried in duck fat the first time around and soybean oil the second. They could have used some salt, but having no salt is preferable to having too much. Especially when... 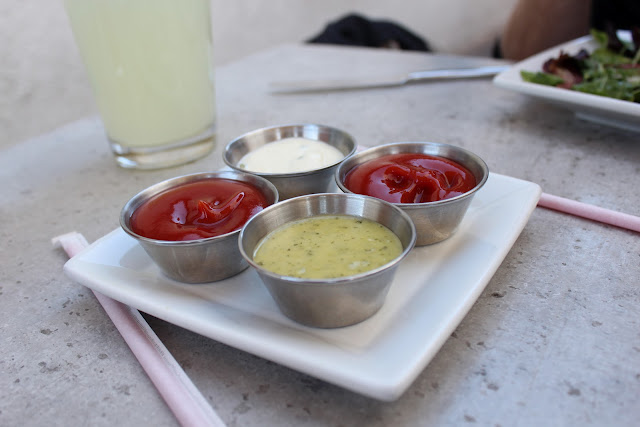 ... you get dipping sauces. Remoulade, horseradish chive sauce, and ketchup. 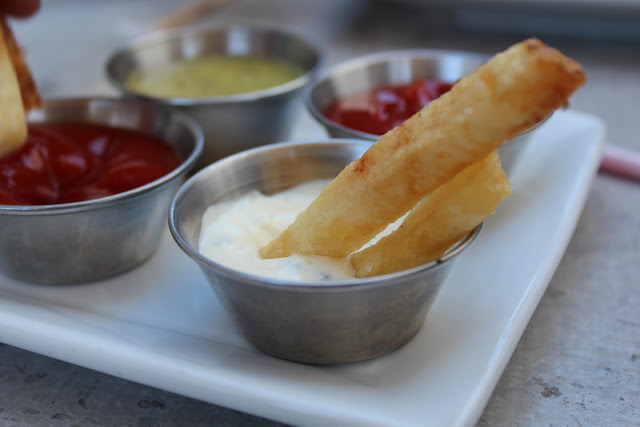 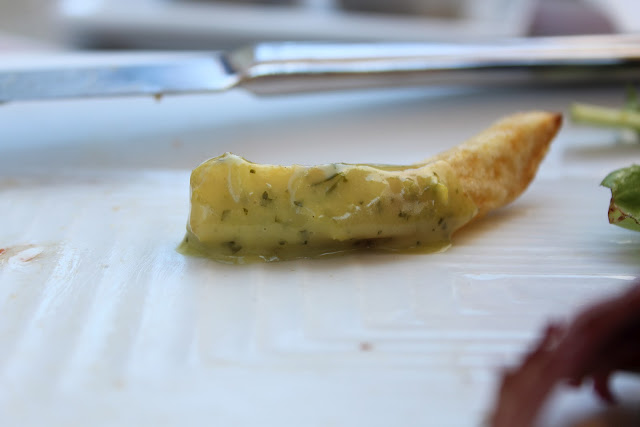 The remoulade was my favorite of the bunch. The horseradish chive sauce was good, but would have been better with more horseradish kick to it. Even as I was eating the fries, I wished strongly that I had some Sir Kensington's Gourmet Scooping Ketchup. That feels like it would be a match made in pommes-frites-heaven. But I don't carry that in my car like I do Trappey's. Not yet, anyway. 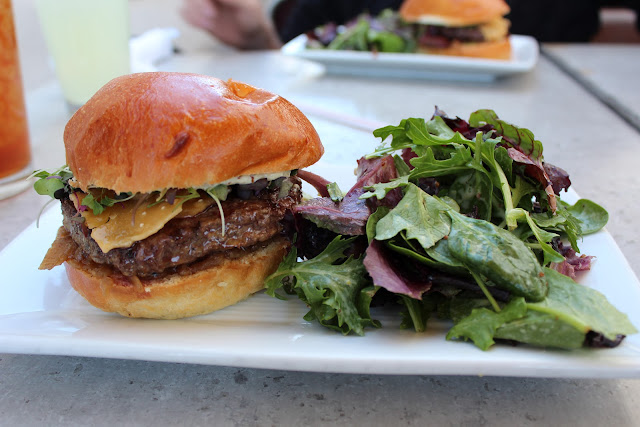 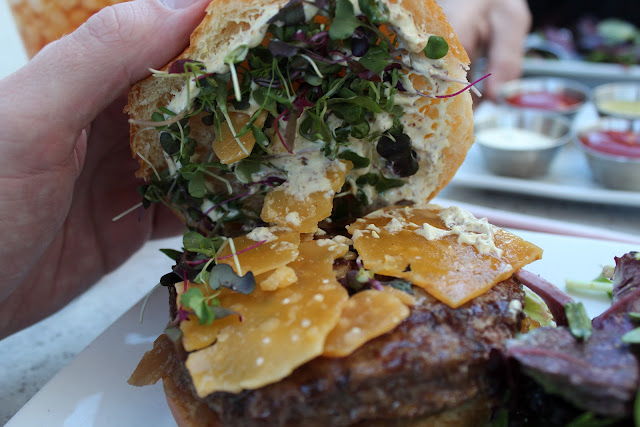 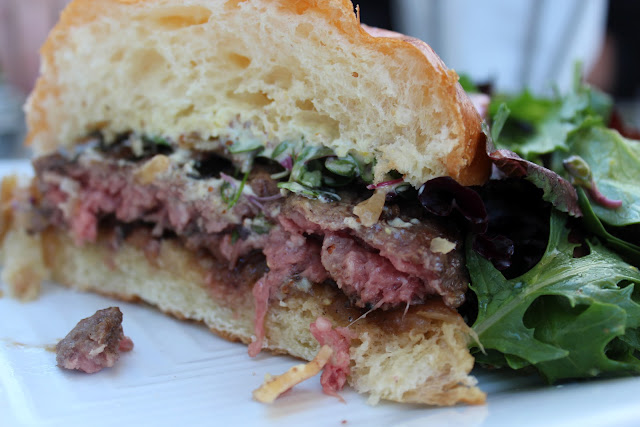 And now, my friends, the burger. I've been lucky enough to have eaten some truly amazing burgers around this country: the fancy, short-rib-stuffed things that cost more than twenty bucks in Los Angeles and the perfectly-seared backyard burger in Upstate New York. Green chile cheeseburgers in Santa Fe and venison burgers in the Rocky Mountains. A Memphis burger fried in grease that hasn't been changed in 100 years. Enough Double-Doubles and Hutch's burgers to form a reasonable replica of the Petronas Towers should they be stacked side by side.

I feel quite comfortable calling this one of the five best burgers I have ever had.

I had been a little surprised when I noticed the menu advertises a 6oz patty; that seemed a little small for the $13 price tag. But the ratio of meat to the buttery-soft bun - a bun that melted in my mouth like almost none I've ever eaten - was perfect. There was shaved Gouda, a mustard aioli, caramelized onion, bacon, micro greens; just enough of everything, not too much of anything.

It almost seems like an afterthought, but the salad was also one of the greatest side salads I have ever eaten. The dressing was creamy and tangy and the greens were quite fresh.

I told you why it took me so long to make it out to The Back Abbey. If I had known how truly delicious the burger is - despite several friends telling me - I probably would have gone sooner. I will be back.
Posted by JustinM at 9:30 AM

The Back Abbey has a very different look in your photos from what I’d expected, having heard a few stories of the place myself. I’d imagined heavy, unfinished wooden tables and benches on a dark, shaded stone patio. Perhaps a different order of more rustic monks reside in my imagination. Nevertheless, I’m marking this on my list for the next time I travel that way.

Michelle: The burger certainly was.

Mindful: I think the interior is more in line with your expectations. The patio is just a regular patio.

Was the gouda melted, or was it just kind of warmed through? Also, that burger looks like it's cooked to total perfection

It was semi-melted, although I let the burger sit for a few minutes while I fought my brother for fries. At one point he just picked up the paper cone, held it in front of his face, and started eating them with a fork to avoid sharing them with me. (This isn't technically the reason my friends nicknamed him "Travis The Traitor" years ago - that was because Murph let loose some serious gas one time when my brother was driving and my bro locked the windows so nobody could roll theirs down - but it's in the same spirit.)

As I was eating, it felt like the cheese was completely melted into the burger. Maybe it wasn't, but it still tasted like a perfect amount of melted cheese. You know how sometimes you get cheese that hasn't been melted and it feels like it's superfluous and even kind of distracting? This was not the case here.

They seriously have something on the menu called The Man Salad? I see that it has meat on it (rawr - manly!) (::eyeroll::).

I wonder if their Lady Salad come topped with a flaming tampon and a bottle of sparkly nail polish?

If you don't already receive a kickback from the Sir Kensington's Gourmet Scooping Ketchup guys, you probably should at this point.

Ha! Nope. When I first started this blog I put up an Amazon portal and had it up for a couple of months. I made $17 in Amazon credit which I used to buy Bill Simmons The Book Of Basketball. But that's all I've ever made off of this.

Now, if they wanted to pay me in free ketchup...

Fries and burger looks incredible. Glad to know the burger makes your top five. That is saying is something.

I might have to make the 2 hour trek from San Diego, your burger vita is impressive and that's some damned high praise