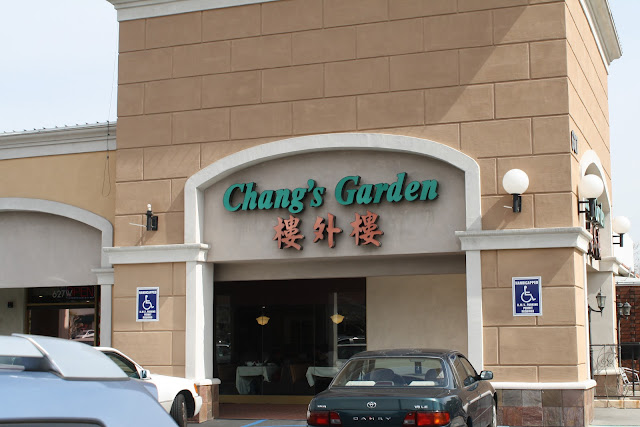 While reading the LA Weekly's "99 Essential Restaurants" edition last November, I stumbled across Chang's Garden. I had not heard of it, and was surprised to see the address on Duarte Rd in Arcadia. Where exactly is that?, I thought to myself. So I used Google Maps. The recognition built slowly. Wait a second... In that shopping center?... In that location? Son of a gun.

Once upon a time this was my grandmother's favorite restaurant. But it wasn't called Chang's Garden then (believe it or not). Nor was it Cafe St. Michel, nor Mediterranean Cafe, nor any of the previous incarnations of this location. Nope, I'm going way back a couple of decades to when the place was called Jeannie's.

To be honest, I spent half an hour trying to remember the name of the place. I could not. I remembered that it was one word and I thought it was a person's name, but I just couldn't get there. Then I had an idea: query the California ABC website. The oldest listing did not include a DBA, but it did have the name of the owner: Jeannie. Then it all came flooding back. I can't remember how many meals I ate with my brother and grandmother at Jeannie's, but it was a lot.

I immediately emailed my friend Bryce, with whom I have been discussing Asian restaurants around the San Gabriel Valley for almost a decade. "Have you ever been here?" I asked.

"How funny you ask," was his reply. "Been meaning to. My parents told me about it several weeks ago- they love it and buy tons of take-out and eat it for days at a time."

We intended to visit Chang's Garden soon after that, but something always came up. Eventually we made it there, bringing along Bryce's two-year old daughter, Lucy. (Her favorite thing to say to me is "Hi Uncle Justin!,"  a phrase she repeated no fewer than 50 times during lunch, though I'll be honest: I never get tired of it.) 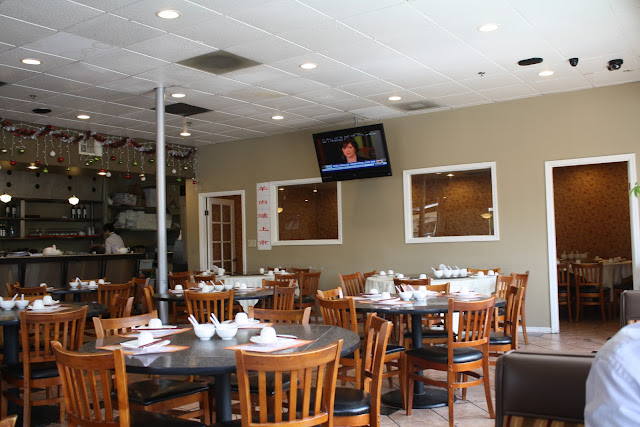 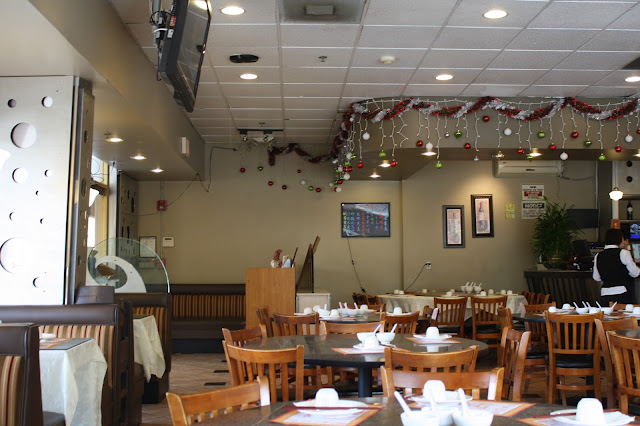 Obviously, this is not what Jeannie's looked like. We arrived shortly after opening and were the second customers (a woman was getting food to-go). By the time we left less than an hour later the place was much busier. 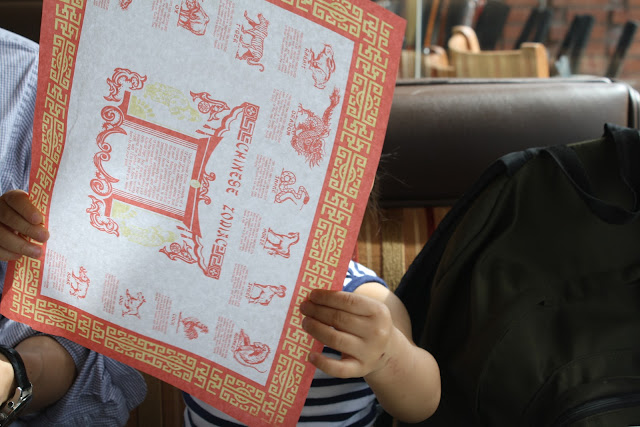 Lucy is 29 years younger than Elizabeth, but her reaction is exactly the same when I ask if I can take her picture: she grabs whatever she can and holds it in front of her face. 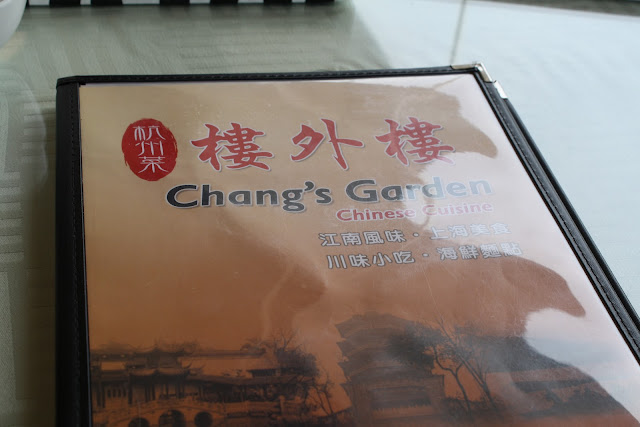 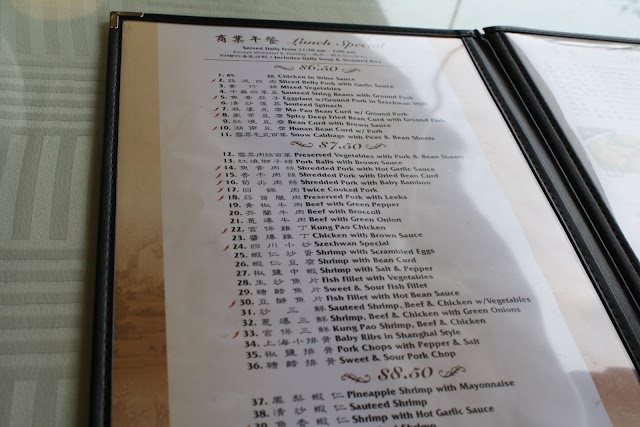 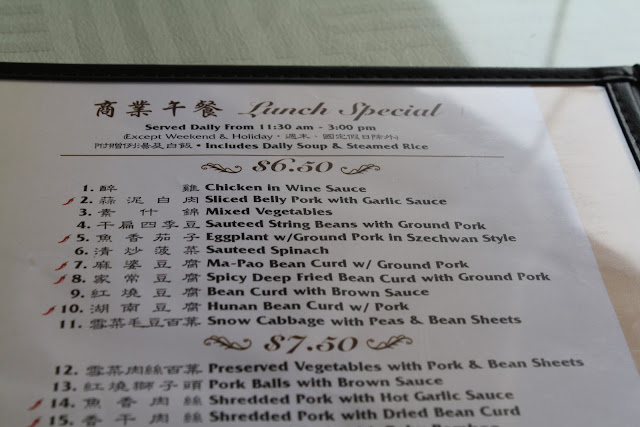 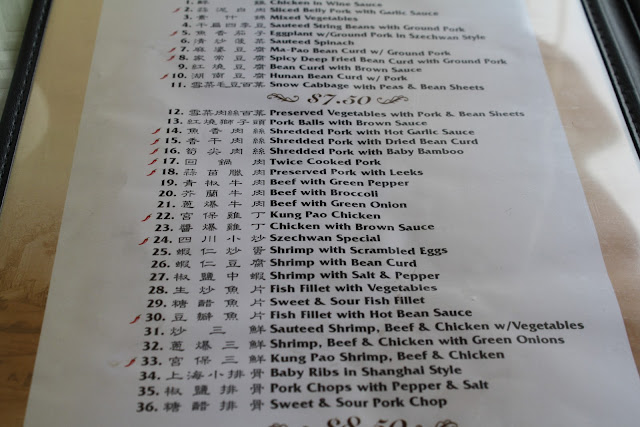 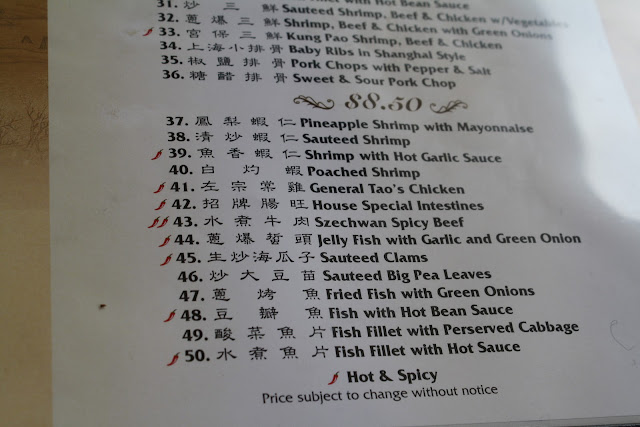 We talked about what to order. I had planned to order a lunch special, but the juicy dumplings off the regular menu intrigued me. "Have you ever had them?" I asked Bryce.

One minute later he asked me if I like fish; I said yes.

"Sure," I said, realizing at the time we were going to have a lot of food. 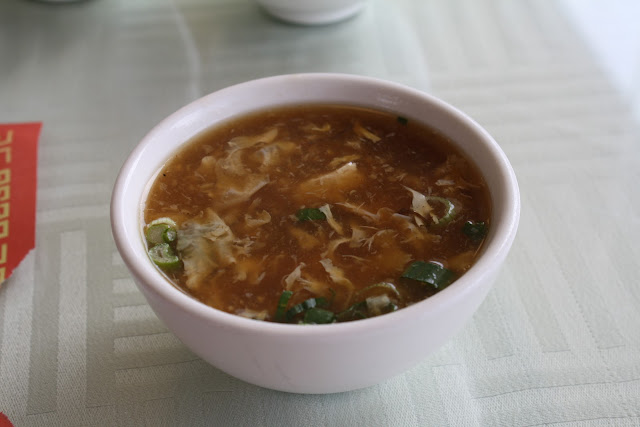 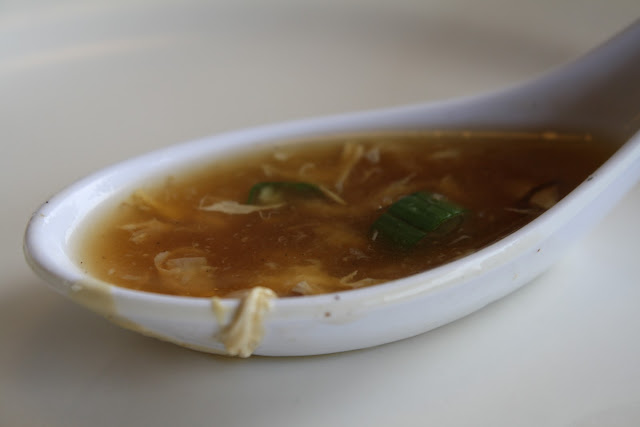 They brought us three bowls of hot & sour soup, as if the 2-year old was going to have a bowl. (I suppose it's possible that some 2-year olds do; what the hell do I know?) 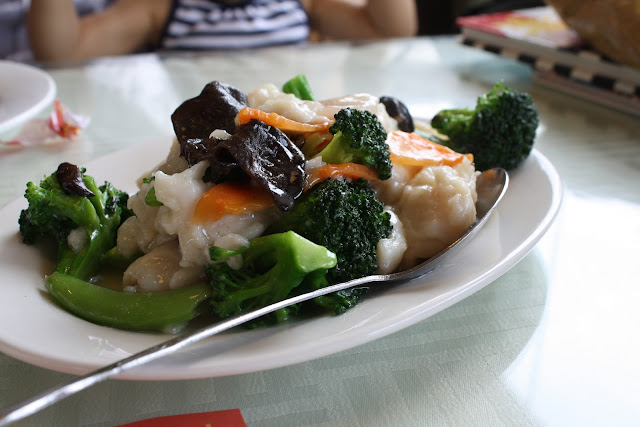 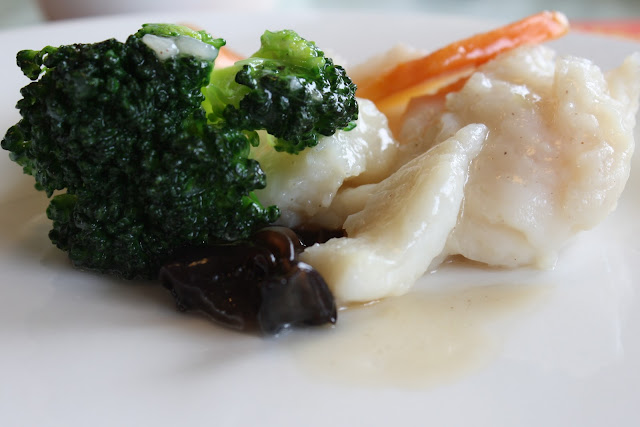 The first thing to hit the table was a dish of fish fillets with vegetables - something quite bland so that Lucy could snack on something if she wanted. Despite the fact that there wasn't a lot of flavor going on, the fish was still tender and juicy and the veggies were delicious. I did not have more than this tiny amount, but I really liked it. 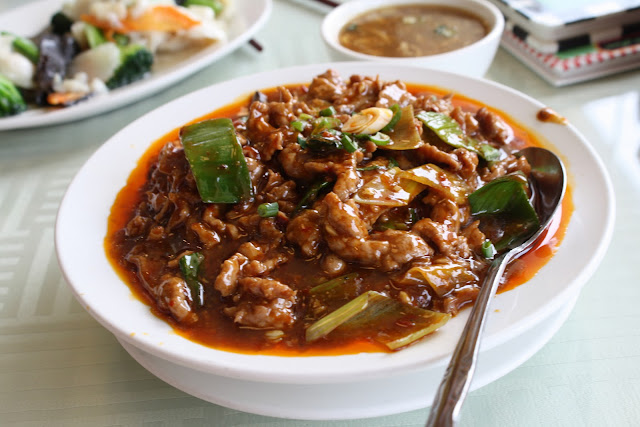 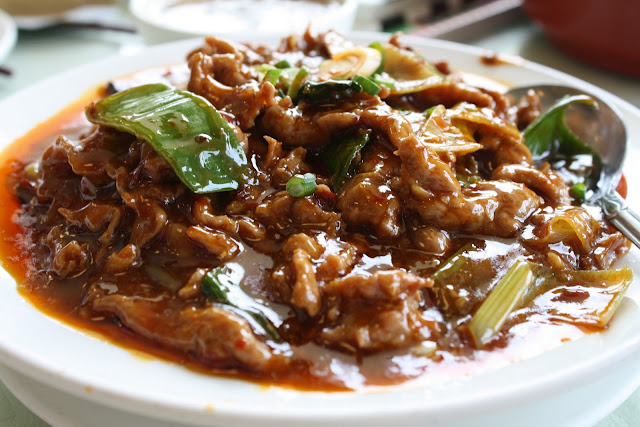 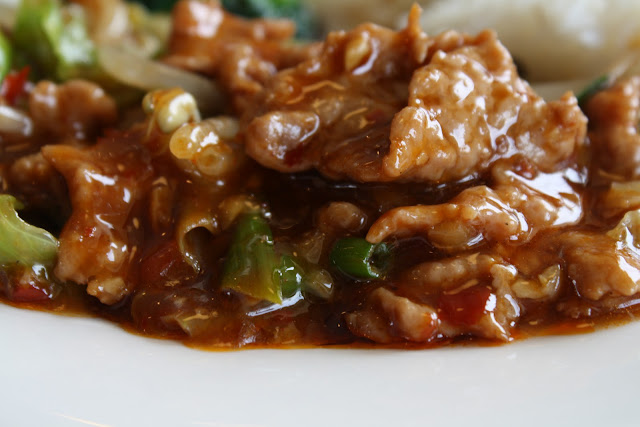 I ordered the Szechwan Spicy Beef.

"It's really spicy," the waitress informed me.

It was delicious. Would I call it "really" spicy? Just barely. It did not blow me away, but the heat was there. Bryce announced after eating some that he was perspiring, and I could feel my forehead heating up too, but at no point did I need anything more than my little cup of tea and I did not hesitate to have a second and third helping.

(The tone in Bryce's voice suggested this was not negotiable and I let it go.) 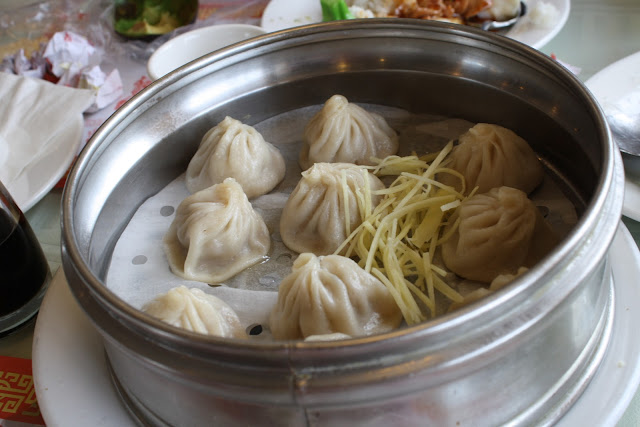 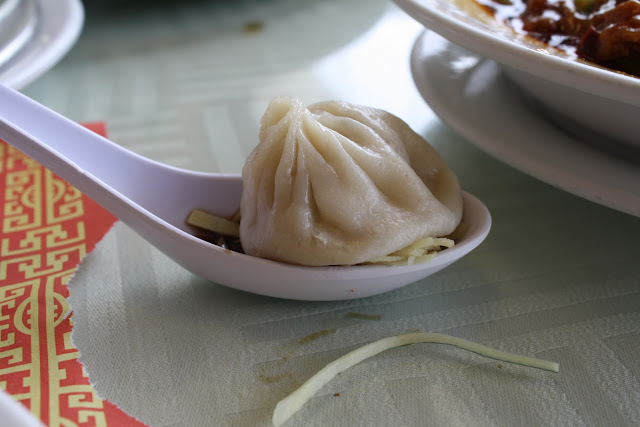 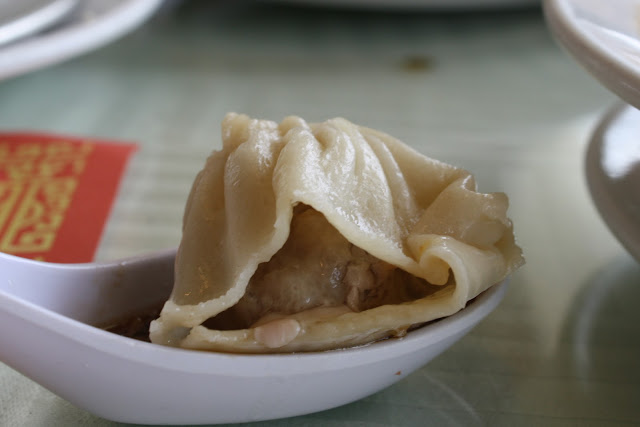 The dumplings we had intended to start with came out after both of the entrees. Oh well. They were quite good - the skin was just the right amount of thickness and the filling was tasty. They would have been better if hotter. (The first time I ever ate at Din Tai Fung around the corner, with Bryce and his wife Amy seven years ago, I burned my mouth on xiao long bao, probably the hottest thing I have ever eaten.) But I was pleased we ordered these. 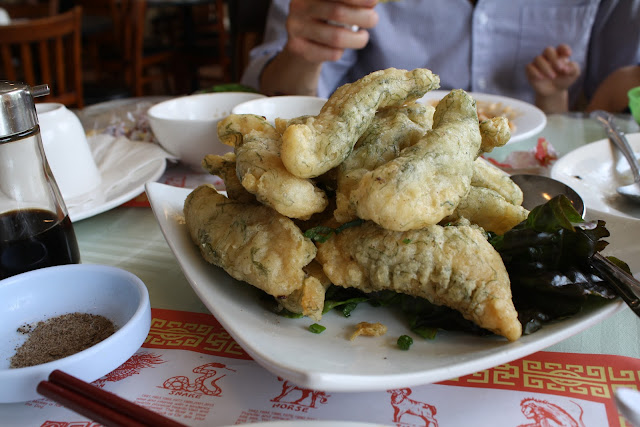 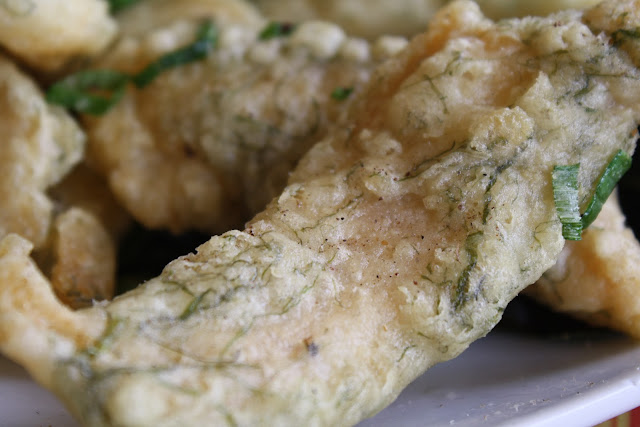 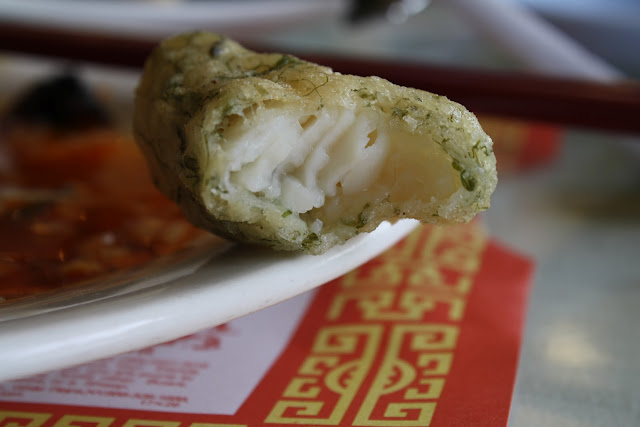 A half-hour after our food had started hitting the table, Bryce announced "Oh, we haven't gotten our seaweed fish yet." I hadn't actually heard him order it - I was probably paying attention to Lucy, as she is much cuter than he - so I'd assumed he decided not to get it, especially when it did not arrive for so long.

"If you haven't made the fried fish we ordered," Bryce told the waitress, "can you cancel that? We're both stuffed." She said okay and walked away, returning 30 seconds later with the dish.

But I was glad she did, because this dish was fascinating. The batter was as delicate as any I have ever had. I'm not sure how they managed to envelop the fish so completely and keep the ultra-thin batter intact, to say nothing of the fact that it was not at all oily. The fish was as fresh as the previous fish entree, and the seawood and salt flavors worked wonderfully together. I cannot think of a single dish I have ever had quite like this and yet each bite seemed so familiar, like it's something I have been eating and loving my whole life. 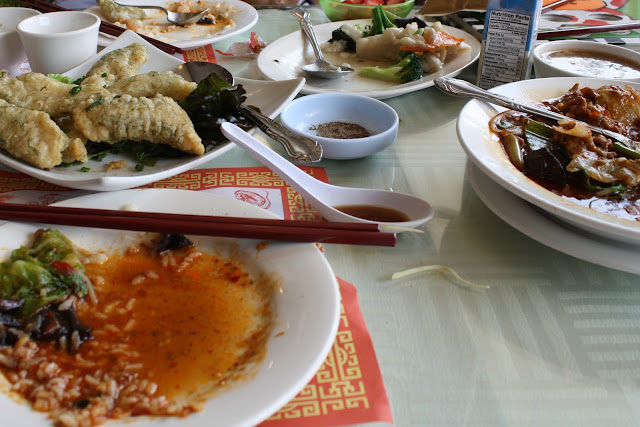 There were plenty of leftovers.

Not only do I like Chang's Garden much, much more than I ever liked Jeannie's, I liked it more than any Chinese restaurant I have been to in Arcadia or Monrovia. There are no fewer than one dozen items I would like to return and try.
Posted by JustinM at 9:30 AM

wow, that's a lot of food, the seaweed fish looks so yummy. has it really been 7 years? we need to go out again. i do hope someday lucy CAN eat all of that.

I must admit that I've been sitting here for 10 minutes trying to decide what the menu item "pineapple shrimp with mayonnaise" would be like. I can't imagine.

I have driven by Chang's a number of times, and have always been curious if it was good. How was the hot & sour soup?

Amy: Yes, it was the spring of 2005. Time flies. We should go out again, although I would prefer homemade Korean food...

Bekah: I noticed that myself. I've seen similar dishes before so I think I know what it would look like, but it's not for me.

Stephen: D'oh! I forgot to say - it was delicious. Not exactly hot, but very tasty.

you have hyped up the homemade korean food way too much, there is no way it will be the same. also, i think the beer you guys had before helped.

Well, I'm not opposed to having several beers before eating your mom's food once again.

I've eaten there before. Good choice!

Justin is most definitely not over-hyping the homemade Korean food. Nope, nope, nope.