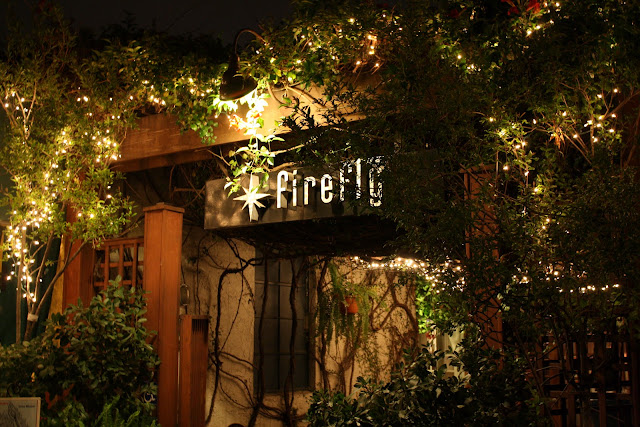 Yesterday I mentioned briefly that I would be leaving Pasadena soon and it elicited a few questions from people, so I will do a little explaining now. In just over two weeks we will be moving to Brooklyn. Elizabeth got a job offer that was too good to pass up, and I am ready for something different in my life. So, after spending all but one year of my life within a half-hour drive of Pasadena, I will be heading east.

To answer another question that has come up many times: Yes, I will be keeping the blog. Tracie and Bryce made me promise to do so. I will take plenty of pictures of all the places we eat at on our trip across the country as well as the new things I find in New York. I don't know as if I will be able to keep up the pace of 5 or 6 posts per week - I seriously doubt it - but we'll see.

So anyway, there are some places I want to revisit and write about before I go, and a Thursday night at Firefly Bistro for "Burgers, Beer & Blues" was definitely one of them.  I got together a few friends, some of whom have never been to Firefly before, and my parents, who have been there with me several times on Thursdays, and we headed over for dinner last night. 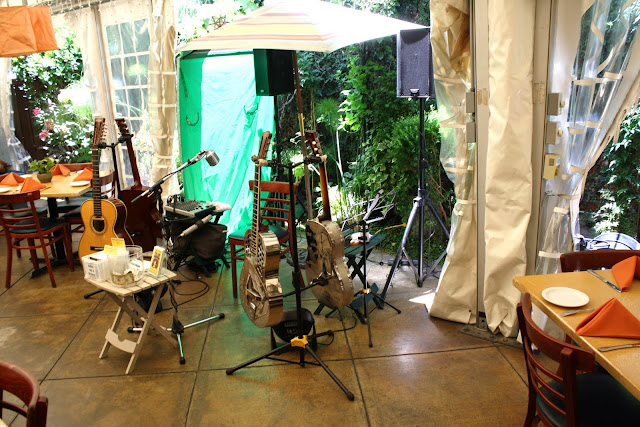 Here is a picture I took on another occasion of Barry Big B Brenner's setup. He uses four guitars and puts on a great show: country folk blues, ragtime, and his take on some classic rock tunes. 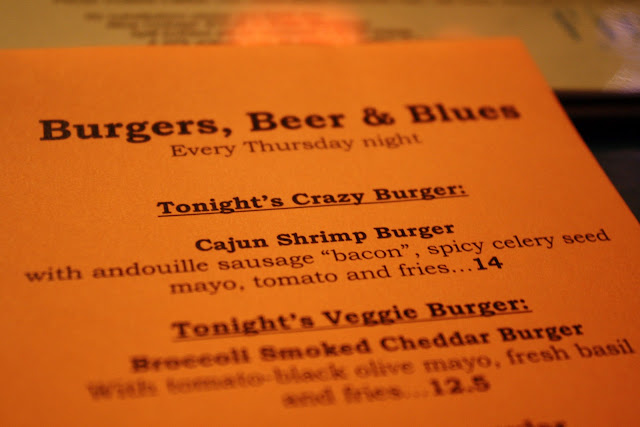 Every Thursday, to accompany the blues, there is a special burger of the week. As I was emailing Carla earlier in the day, I have enjoyed every single one that I have ordered. Last night's looked great: a Cajun shrimp burger with andouille sausage bacon.

"We are out of the shrimp burger," the waiter announced when he first arrived at our table. It was only 7:30. 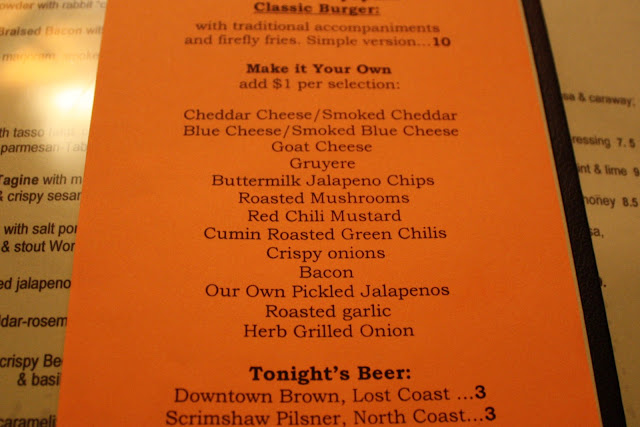 So all seven of us decided to create our own burger combinations from the list. There was some discussion as to how many toppings would be "too many." I'm not sure we came to an agreement, but I think we decided three should be the maximum. 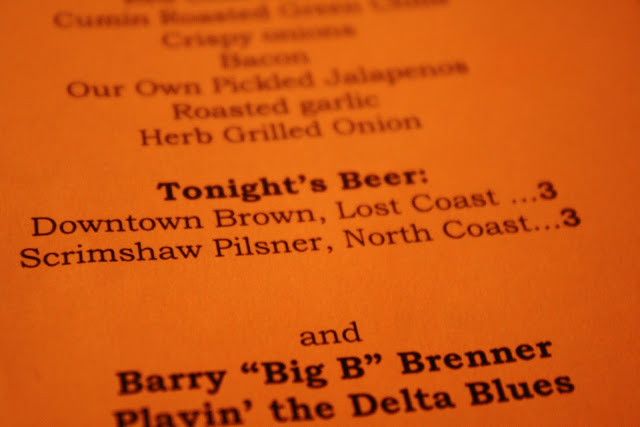 Firefly also features two beers every Thursday that go for three bucks. Elizabeth and I both ordered the Scrimshaw Pilsner. One minute later the waiter returned to inform us that they were out of that. (I will say this about Firefly: they don't make it easy. My dad ordered the Downtown Brown and after he finished it he ordered another - they ran out of that, too.) 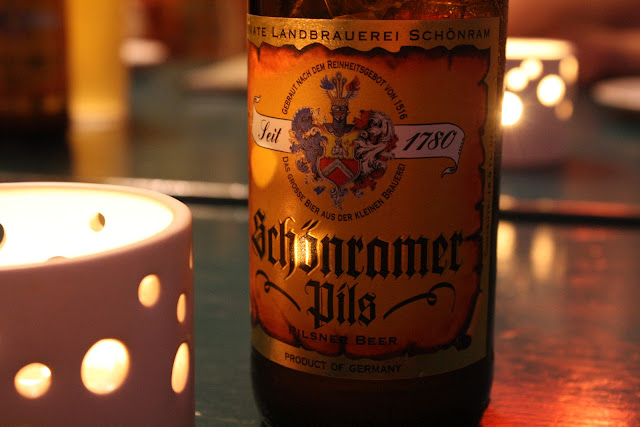 Tim was thrilled to see the Schonramer Pils, proclaiming that it might be his favorite beer. So he, my mom and Carla each ordered one. I took a sip and agreed it was quite good. 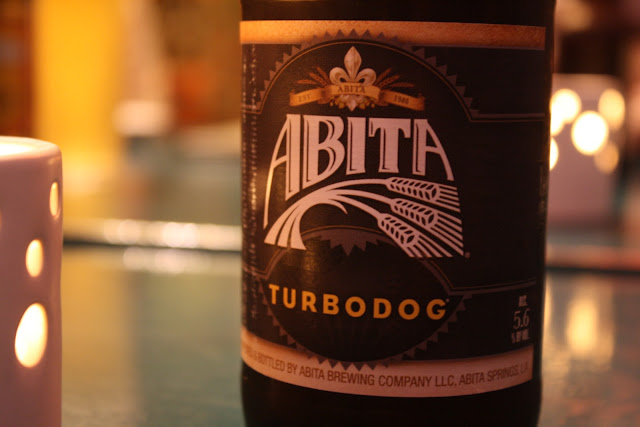 I had a Turbodog, a longtime favorite of mine. Actually, I had three of them. Elizabeth went with Blue Star. (The waiter said, since they'd run out of the beer specials, that he would give us the Turbodog and Blue Star for the $3 price, although I did not see the bill so I'm not sure if he followed through on that.) 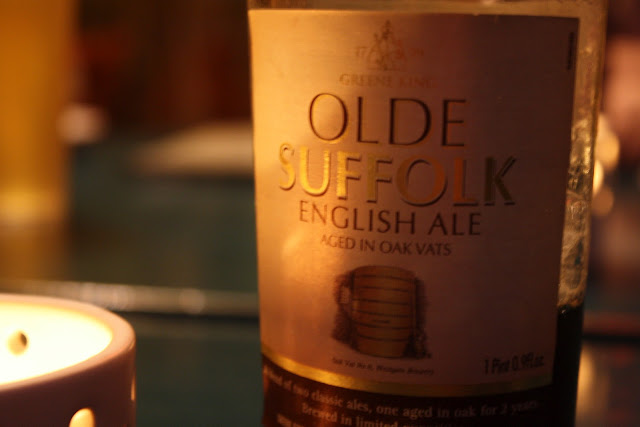 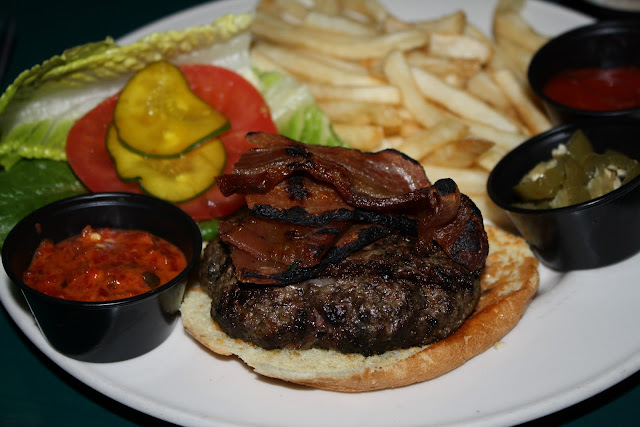 With my burger, I opted to get bacon, pickled jalapenos, and red chili mustard. 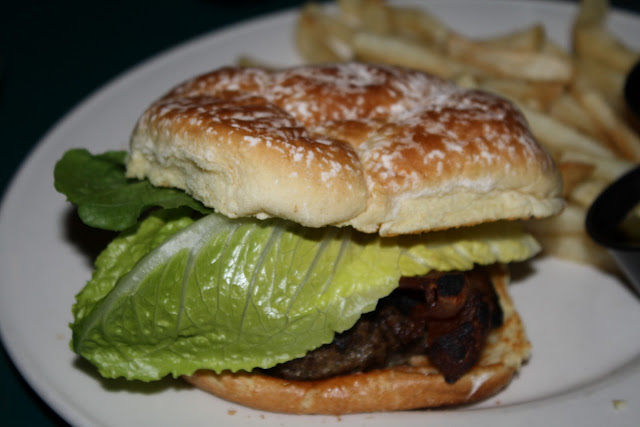 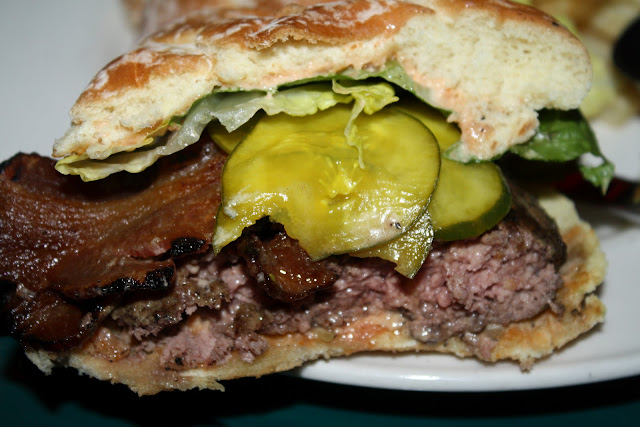 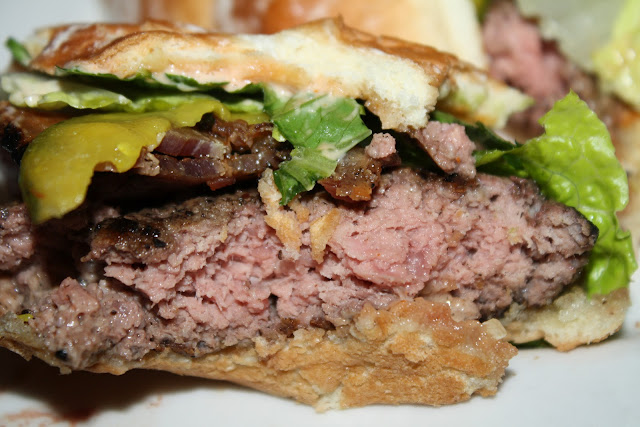 And it was outstanding. I love the potato buns Firefly uses, their meat is always good, and the crunchy bacon and spicy sauces complemented each other nicely. (Dave hates pickles so he offered them to me and I gladly accepted.)

All of us received fries that were cold. It wasn't too big a deal because the burgers and beer were the stars of the show here, but I mention it because it illustrates what I said earlier about Firefly: in every visit, there has always been at least one - usually more - issue that comes up, whether it's running out of their featured burger or beer by 7:30 or serving cold fries. And yet I keep coming back. That's how enjoyable it is there in the tented dining room. It makes all those issues worth it.

This was a fantastic time. Dave and Tim - both guitar players - loved watching the guitarist, especially when he rocked his 12-string, we all really enjoyed our burgers, and the relaxed atmosphere was wonderful.

There are many routines I will miss around Pasadena, and hitting up the South Pasadena farmers market on a Thursday evening then ducking into Firefly for some blues and cold beer is right near the top of the list.
Posted by JustinM at 10:23 AM

That's a big move, congratulations! There is a lot of amazing food in Brooklyn and I hope you are happy for many meals to come.

So glad you're keeping the blog. Of all the places your have written about more than once, this is the one I most want to go to. It just looks so cute.

Kate: Why thank you.

Michelle: It is cute. The first time I took Elizabeth there, for brunch on her birthday four years ago, she announced that she wanted to live there.

Oh, you are kidding me. We are basically trading places. That makes me a little sad. But you will love Brooklyn! Congrats on the new experience.

Very excited to welcome you to the East coast! Pastrami awaits you!

Congrats on the move. I'm excited, as I make it to Brooklyn about once a year, and always looking for new places to try.

pp- just curious- what does elizabeth do or what will she be doing? i figure you work with computers n stuff.

Luisa: So you guys decided to move here?

Fritos: I look forward to it.

Anon: She is in fashion.

Sad to lose such great blogging about local food joints. I've lived in the Pasadena / Northeast LA area for the past several years and I've enjoyed discovering places because of you!
Yet, I can't wait for your Brooklyn foodie blogging!
You MUST MUST go to DiFara's pizza deep in the borough on Avenue J. I didn't want to believe the hype but now it's become my favorite pizza in the WORLD. You probably won't want to wait and it's always crowded but man, it's the best pizza I've ever had (and this includes Italy!).

Can't wait for you to come to new york, you're going to love all the new options, plus you can review places that i haven't been to yet. Here's an early welcome from a fellow new yawker, you'll pickup the accent in no time.

Lauren: Wait, places get crowded in New York? I might have to rethink this.

Zac: Thanks. The accent I can handle, but don't expect me to become a Yankees fan.

Very excited to see your new food adventures along the way and when you get to NY. I don't know if I will ever get to travel to any of the places you eat but I just enjoy reading about good food and looking at good food pictures. And you have introduced me to many wonderful products and new ideas for my own cooking on the way (i.e., Sir Kensingtons, which I FINALLY found at CostPlus World Warehouse here in Denver, new kinds of cheese, new ways with sliders, etc.) Yours is really one of the most enjoyable food blogs out there.

Our original plan was to head back through Boulder so I could introduce Elizabeth to my favorite bar in America: The Dark Horse. But I think we've decided on a different plan.

I need to go back through your archives again (have already read them all once) and this time jot down ideas for things to cook at home. I am taking that cheese with the ash in it for snack at work tomorrow.

I still want to live at Firefly. It's not practical for NY though since it's a glorified tent.

You're going to miss Zankou chicken for sure

I was a few posts behind reading my blogs and I just read about your big move! Congratulations, how exciting! I can't wait to "travel and eat" through your blog!

i'm sorry to see you leave cali, but as a former east coaster i look forward to some drool worthy posts from NY! i live in santa barbara and it has been a joy to read your blog and i am familiar with many of the places you have reviewed over in this area. good luck on your move and congratulations to elizabeth!!

Why thank you. We'd hoped to get in one last weekend in Santa Barbara before we left, but every weekend there has just been too much to do.