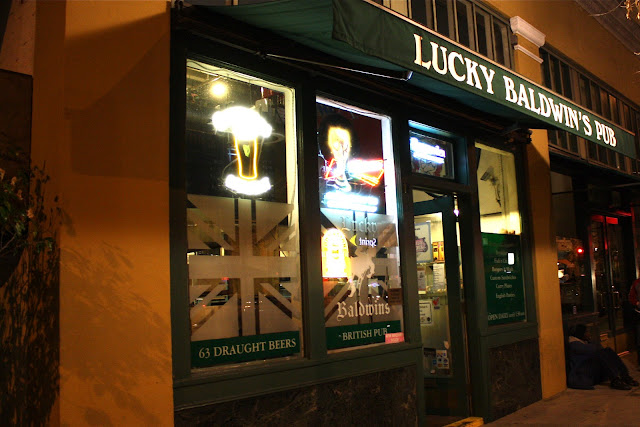 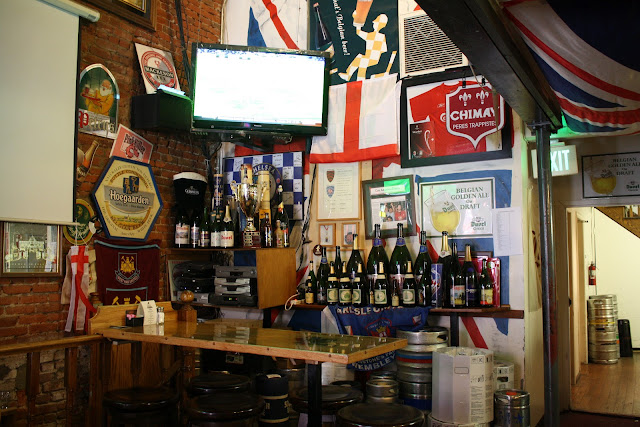 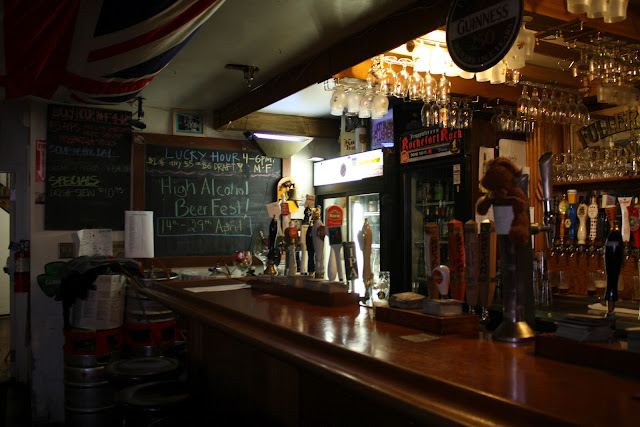 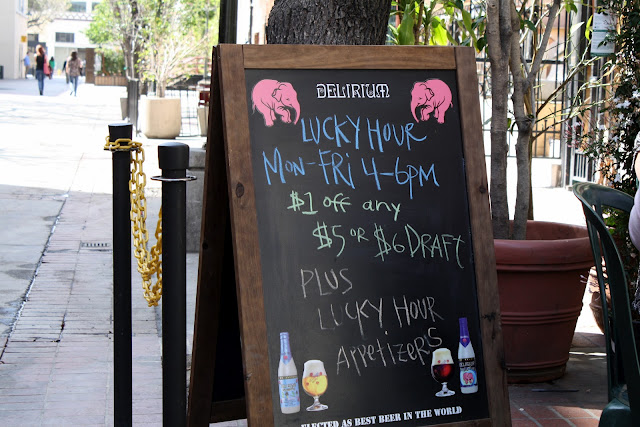 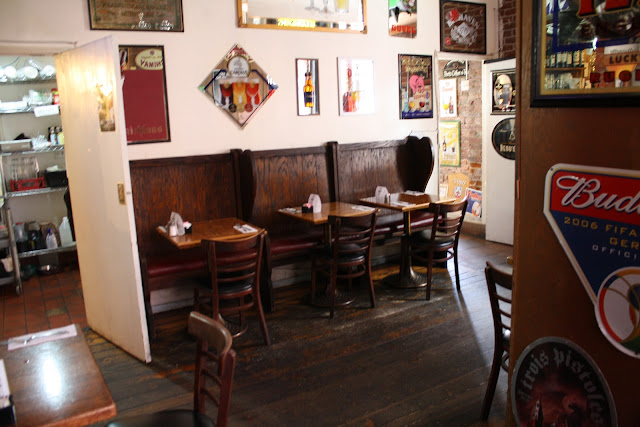 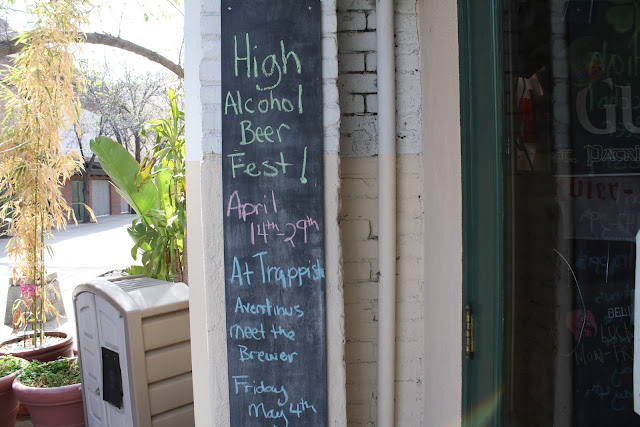 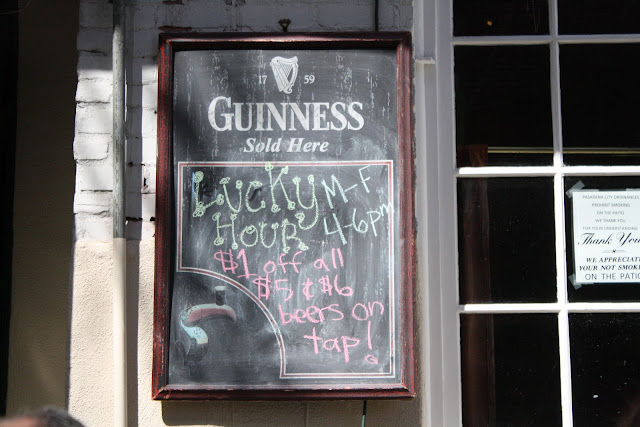 In three and a half years and 879 entries, the words Lucky Baldwin's have appeared in the body of a post exactly once. And that's kind of funny, because once upon a time I spent more waking hours there than I did at home. Once upon a time it was my favorite place in the entire world.

I often visit places and write about my history with it. I can't do that here. I mean, I could, but it would be the longest post I've ever written. I could write a book like The Tender Bar. So, similar to what William Least Heat Moon did at the beginning of Blue Highways, I will devote one paragraph to my history with the place and then nothing more:

I met Elizabeth at Lucky Baldwins. And Tracie. And Tim. And Murph. Carla, Bryce, Hatcher, Dave, Min, Rob, Phil, Mick... If you've read their name here and they are not related to me, there is a 90% chance I met them at Lucky's. The first legal drink I had in America was on my 21st birthday on their patio. The only time I've ever had my heart broken was by a girl who worked there. The last time I ever saw my friend Erik was inside the bar one Thanksgiving. A friend of mine who worked there said she needed a ride and when I asked where she said Boston; I drove her. I received phone calls there more than once and on another occasion mail. After 17 years of heartache following the Angels I watched them win their only World Series from a table on the patio. I held the owner's son in my hands on his first day home from the hospital and presented my birthday present: a Shaquille O'Neal onesie; he didn't care at the time which was probably for the best. I used to play the entire Small Change album on the jukebox until the cook asked me to stop because he said it was making him suicidal. I once was interviewed sitting on a barstool by the local ABC news at 6:10 in the morning with a pint in my hand. 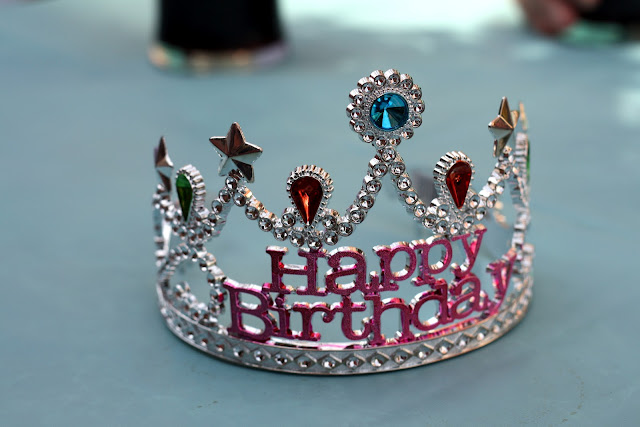 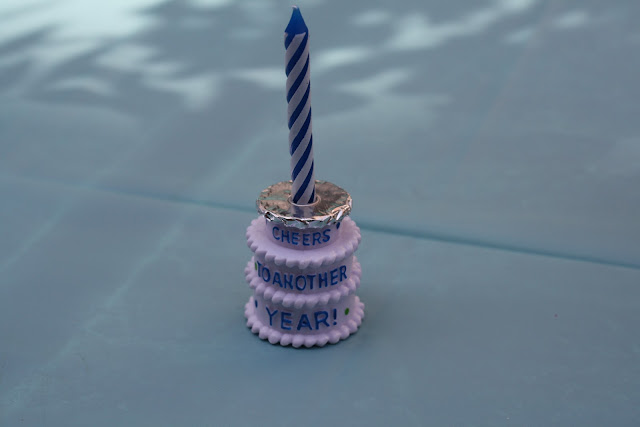 So the other day, for Tracie's birthday - I won't say which but it was one worth celebrating with extra vigor - a group of us gathered on the patio at Lucky Baldwin's for a birthday celebration. 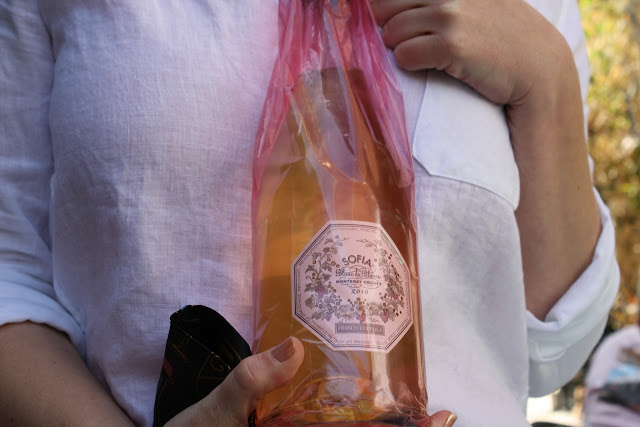 You can never go wrong giving Tracie booze, yarn, or cats. So we gave her booze. 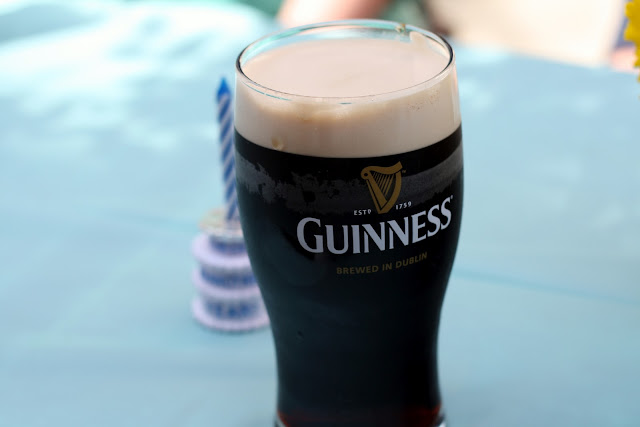 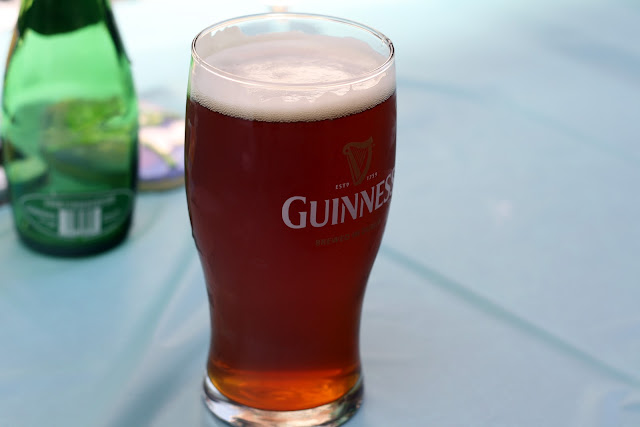 Elizabeth and I have not been regulars at Lucky's in three years but the waitress remembered our orders without asking: Guinness for me, Craftsman Poppyfields for her. 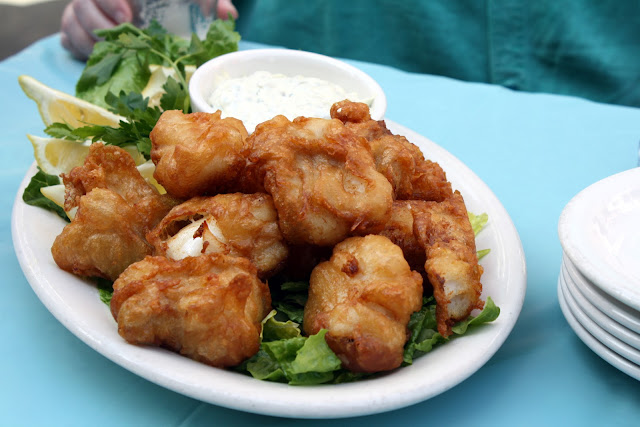 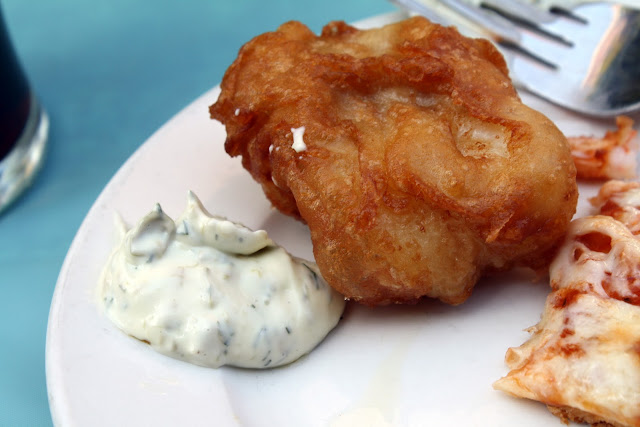 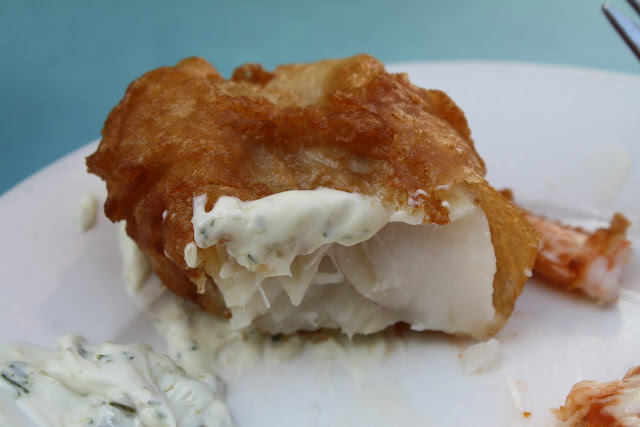 I've always enjoyed Lucky's fish & chips and was pleased to have a giant plate of smaller, fish "nuggets" served. I'd never seen it done that way before. I had planned to eat at least two or three, but only ended up having one. Not because it wasn't good, but because... 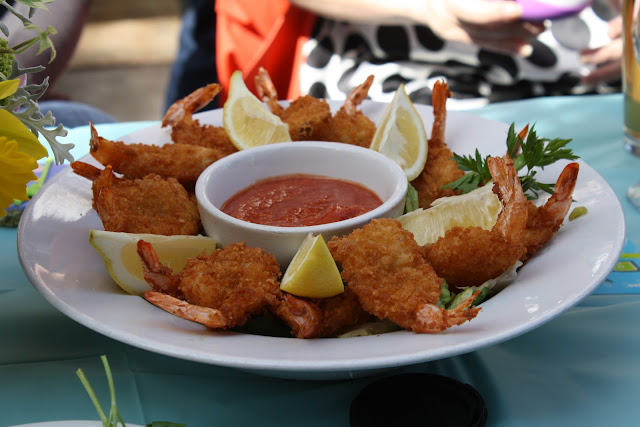 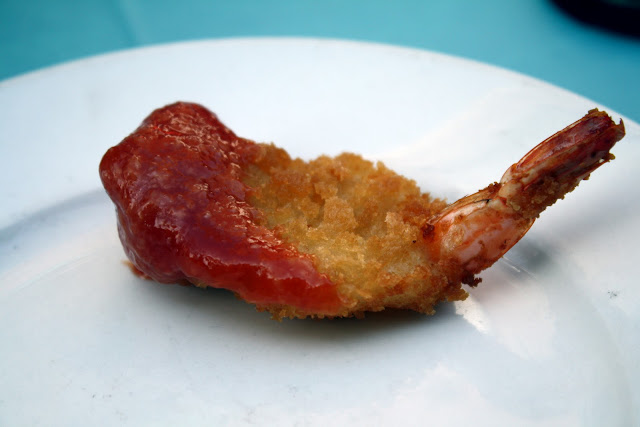 Two big plates of fried shrimp appeared. There are very few things in life I enjoy eating more than fried shrimp, and these were done perfectly. 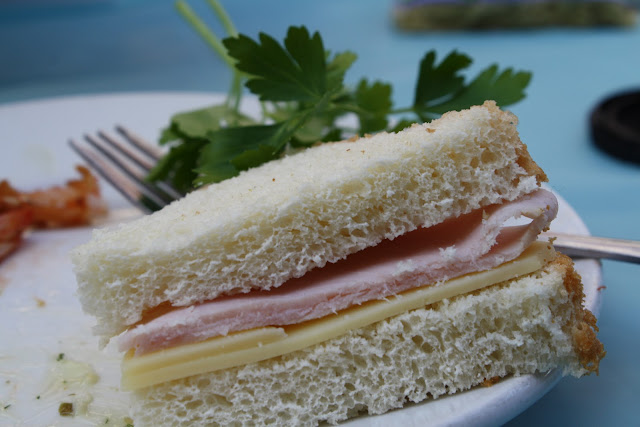 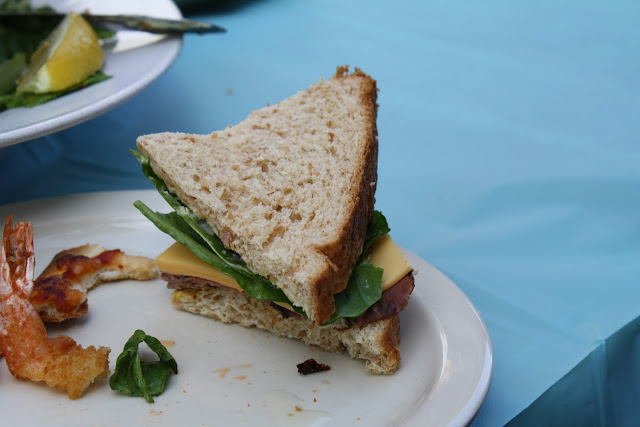 The sandwich pieces were a little bland, but it happens. (Lucky's customizable sandwiches have always been some of my favorite in town, but you can always add mustard and pickles to those.) 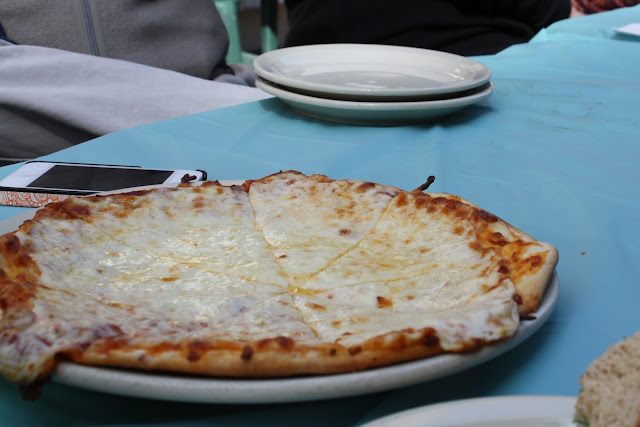 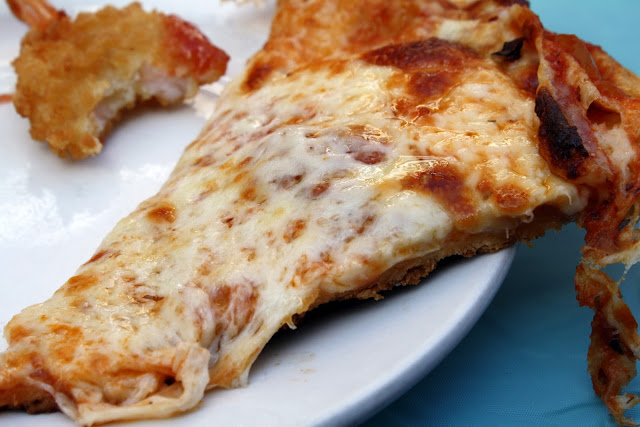 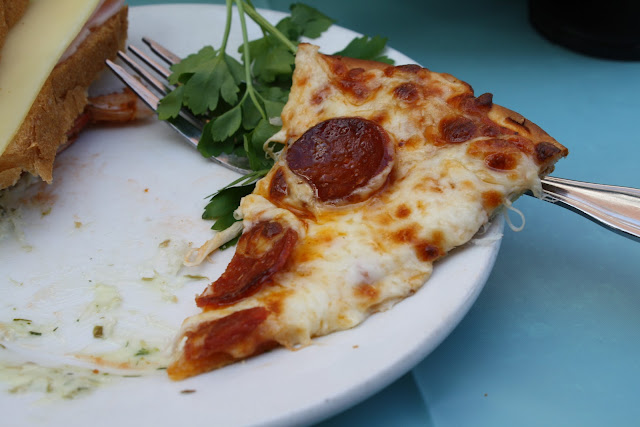 The pizza really surprised me with how good it was. Thin crust, a tangy sauce, and plenty of cheese. I loved it. 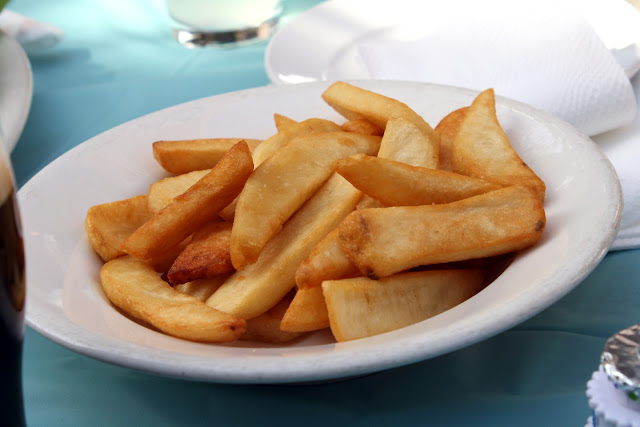 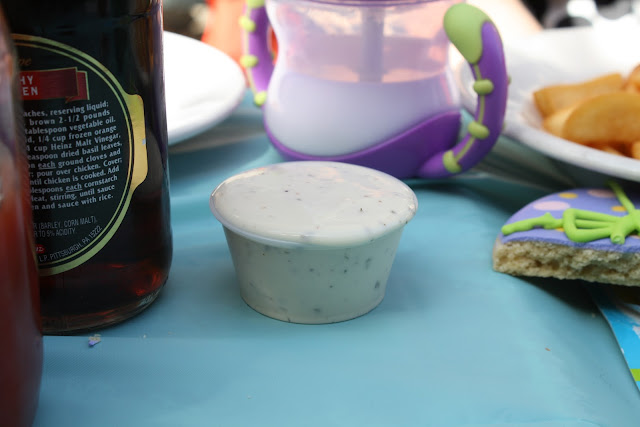 I've never been much of a fan of Lucky's fries, and this time was no exception. Not even when Tracie's sister ordered a side of ranch. 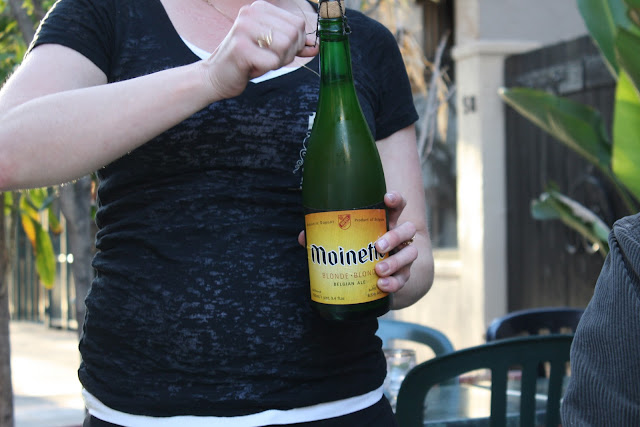 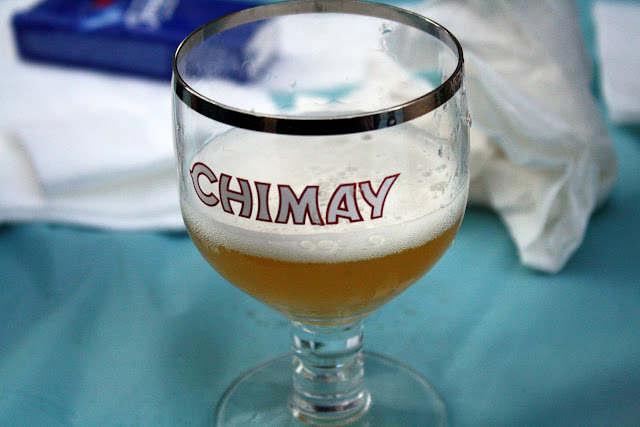 Someone bought the table a bottle of Moinette blonde, though the waitress would not tell us who as she uncorked it and poured us all a taste. It was fine, but no Guinness. 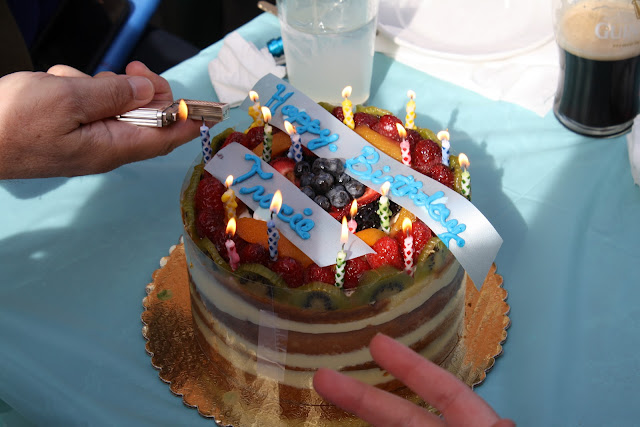 I won't tell you what number birthday it was, but I will tell you that the number of candles is incorrect. 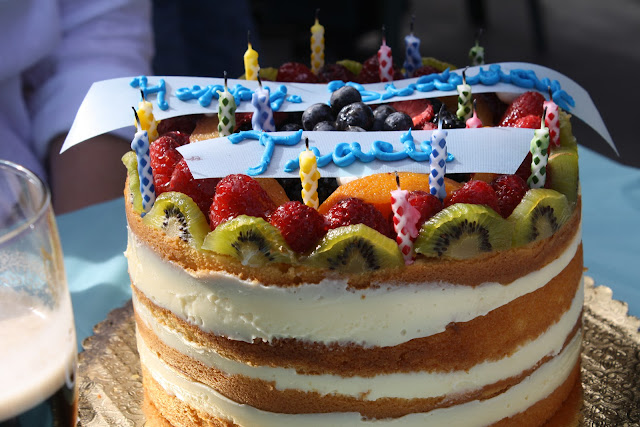 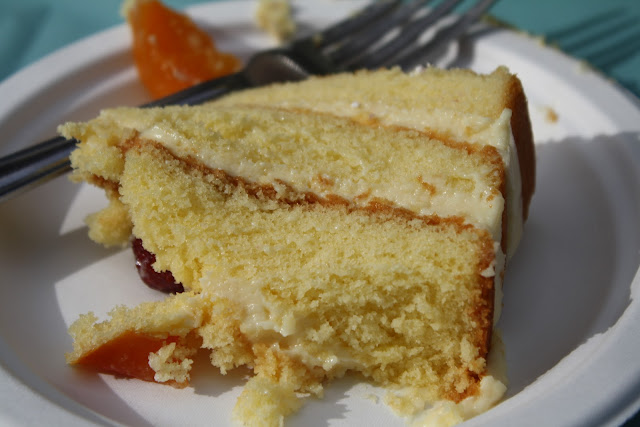 The cake was delicious.

Like I wrote, I have not been a regular at Lucky Baldwin's for three years. There is no need to go into the reasons why. But hanging out there with a bunch of friends was the perfect way to spend my last weekend in Pasadena.
Posted by JustinM at 9:30 AM

Ah, I remember the days when y'all sitting on the patio was akin to a sailor seeing a lighthouse (or something like that)... Gonna miss the occasional bump into brother. Wish I coulda made it out to the __th Birthday Cele. If you decide to get all highfalutin after the move to NYC and get a cool 212 area code, do a favor and text the new digits before.

Justin, I was great meeting you and exchanging info on good bbq spots. Felecia and I wish you all the best in NYC. We'll be there in May. I know a great spot we can check out.

The fish ball mounds look awesome. I'm always envious of people who have regular bars and restaurants. I love your history there. When I was 10 my family used to eat at a Chinese place in Rowland heights till I took a massive dump and broke their toilet and the owner yelled at me and we never went back. I didn't make any friends at that place.

Can you give me the url of Elizabeth's blog again?

Just click on The Beauty Beat under my favorite blogs.

Happy Travels and congratulations to you both...

Thanks for the great read to a total stranger like myself - and I will continue to be a faithful reader!!!

I would buy that book. Good luck to both of you with the move. I'm excited to see blogs from a new location!