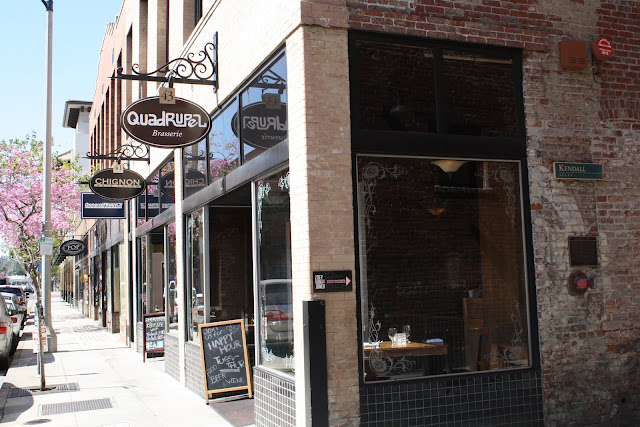 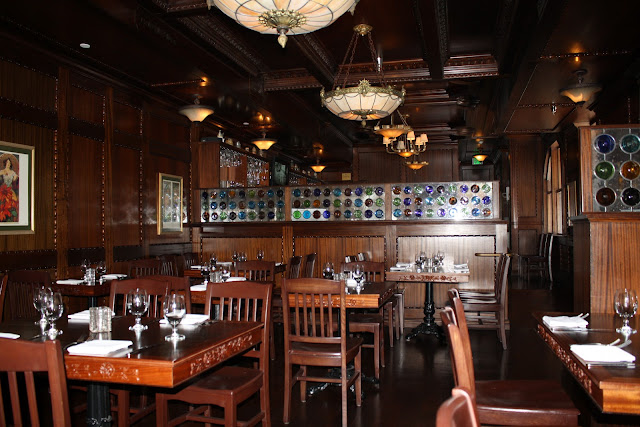 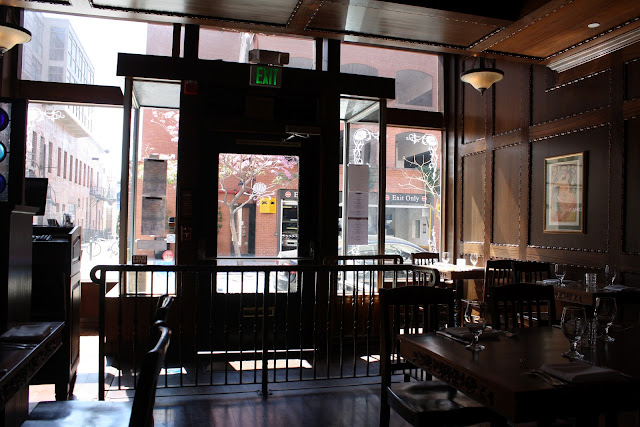 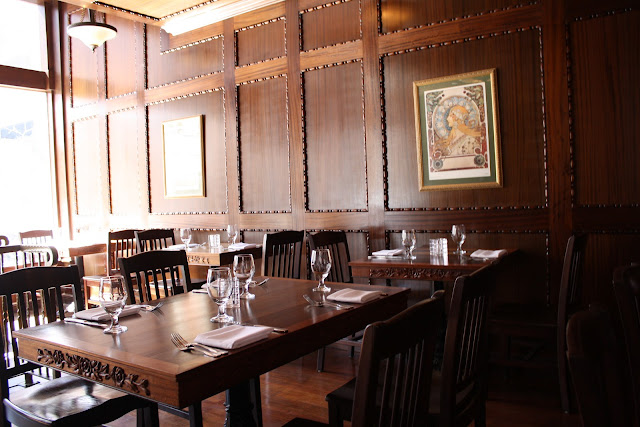 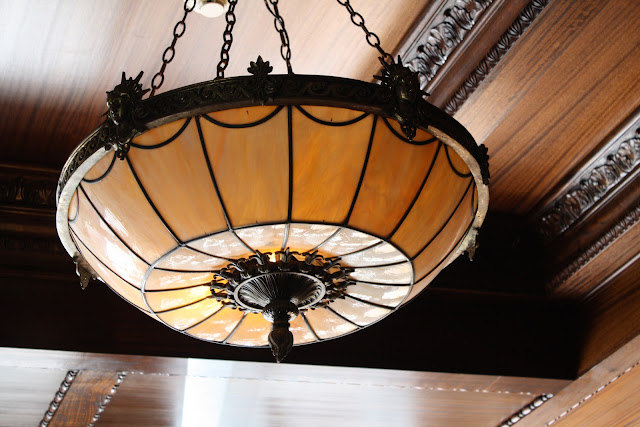 I'm not sure what's happened to this place.

Three times I have mentioned Quadrupel: a dinner with a group of friends shortly after it opened, a birthday dinner two years ago, and a lunch one year ago on a gorgeous, 85-degree January day. All three times I really liked my food - even going so far as to say I loved some of the items - and all three times the place was crowded with people. Everyone, including me, having a good time.

I went to lunch with my parents the other day at Quadrupel and although we were there more than one hour, there was not a single other customer in sight (as you can see from the photos). By the end of the meal, it was easy to understand why. 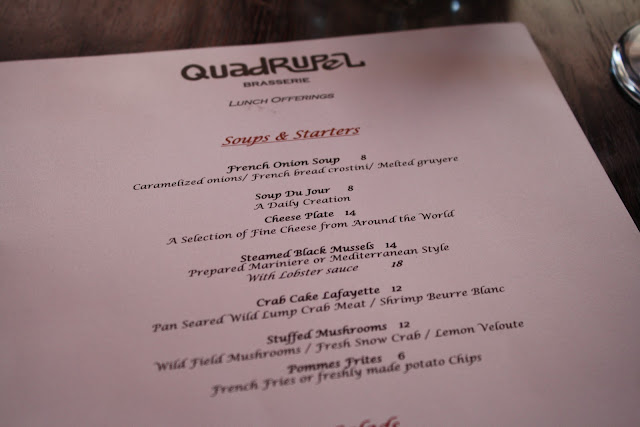 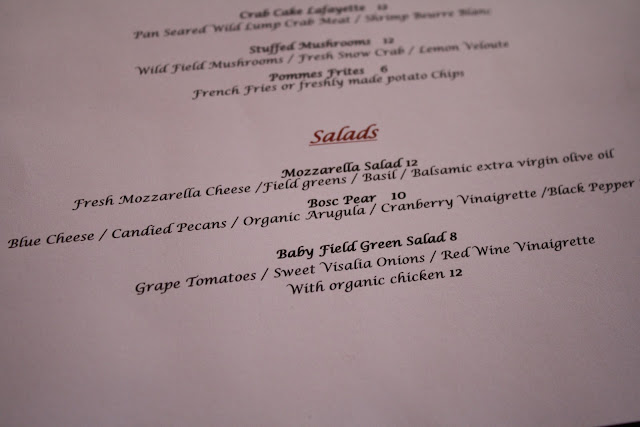 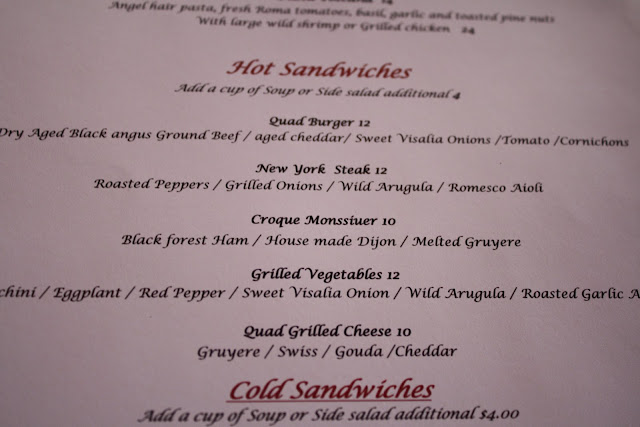 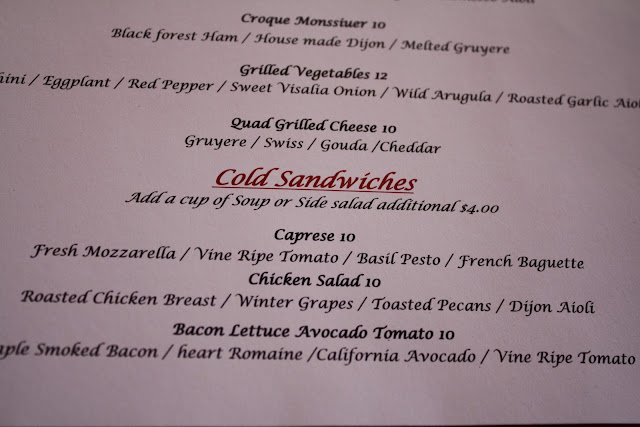 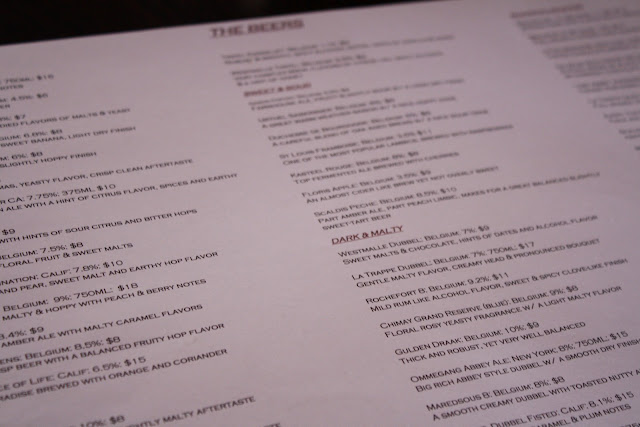 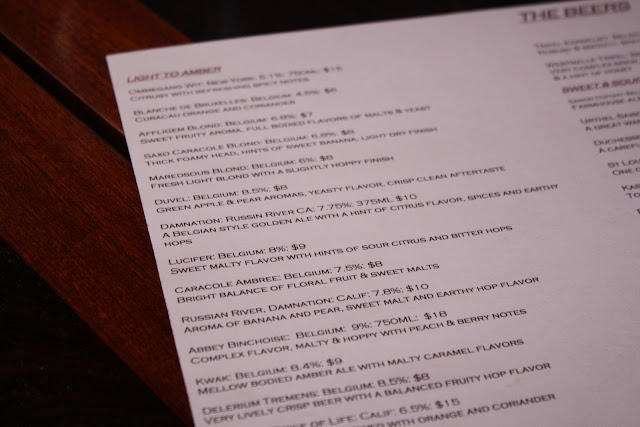 The menu has been tweaked a little over the years but quite a few of the same items remain.

The pommes frites are listed under the starters on the menu. "We'd like to start with some pommes frites," I told the waiter. I thought these two things made it clear that they would be an appetizer. 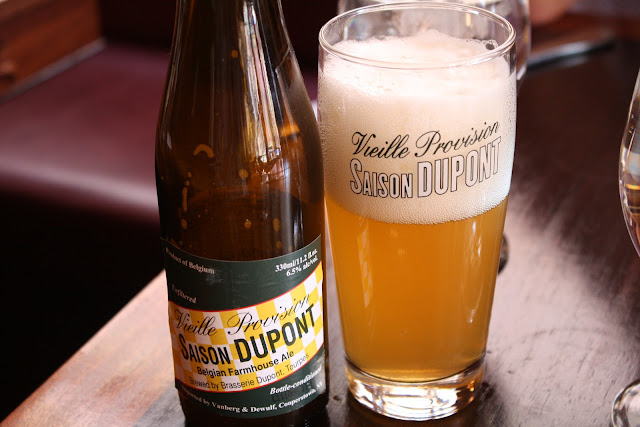 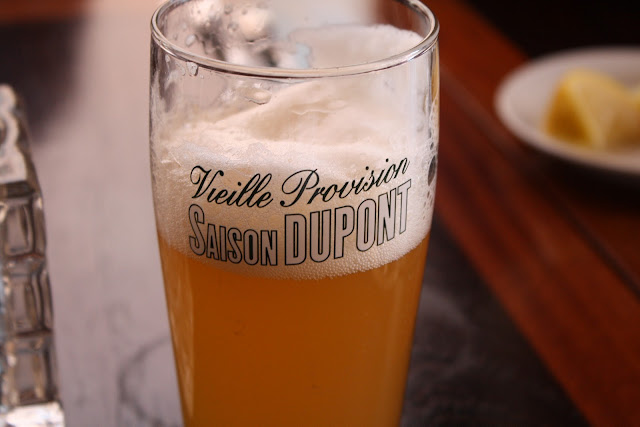 Saison Dupont has been kicking ass on my friend Nick's blog, Beer Vs Beer Vs Beer, so I thought I would give it another try. It was not as unpleasant as I remembered it being and I enjoyed the citrus flavors, but it's still too sweet for me to have more than one. 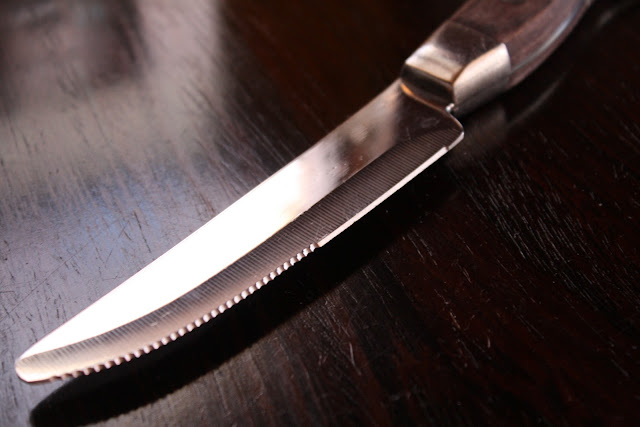 I loved the heavy knives the waiter brought us prior to receiving our food. 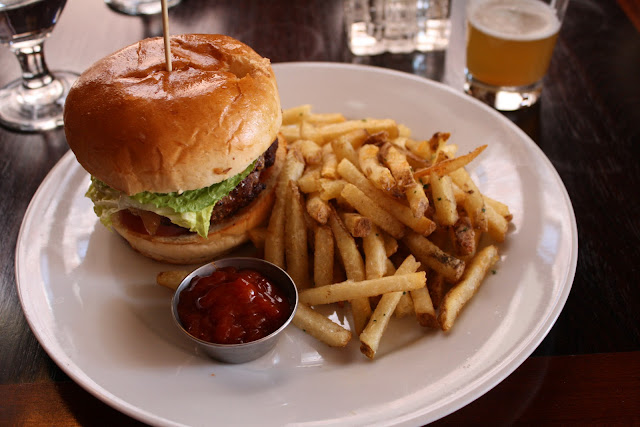 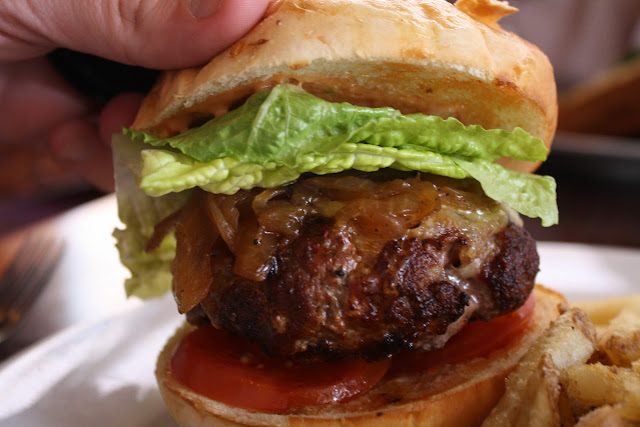 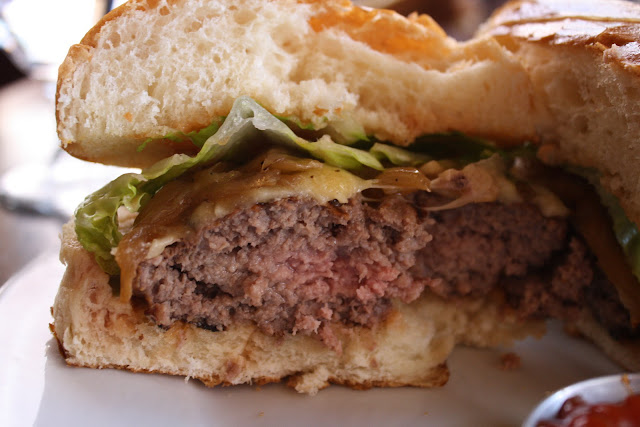 At one point I turned to see our waiter bringing our entrees. My burger was served with a large helping of fries. There was nothing on the menu indicating that it would be. "I didn't realize it came with fries," I said.

"We decided to give you some," he replied.

"But what about the fries we ordered as an appetizer?"

I guess I shouldn't complain about being given more food than I ordered, but this still annoyed me. I mentioned, when writing about Zeke's two weeks ago, a trend I have experienced several times already in 2012: restaurants serving their food differently than advertised on the menu, and always shrugging off any questions about it. If I had known that my burger was going to come with fries, I would not have ordered a $6 plate of them, I would have just shared these with my parents.

And, of course, I had ordered the fries as an appetizer, which I was now being told would arrive after our entrees.

I had also ordered my burger medium-rare. There was only the slightest tinge of pink in the center of the burger, pretty much the definition of medium-well. When I order a twelve-dollar hamburger, I don't want the flavor cooked out of it. I can understand a mistake like this in a busy restaurant when the cooks have multiple burgers on the grill, but as I wrote above, we were the only customers there.

I considered sending it back, but I didn't want to wait another twenty minutes. 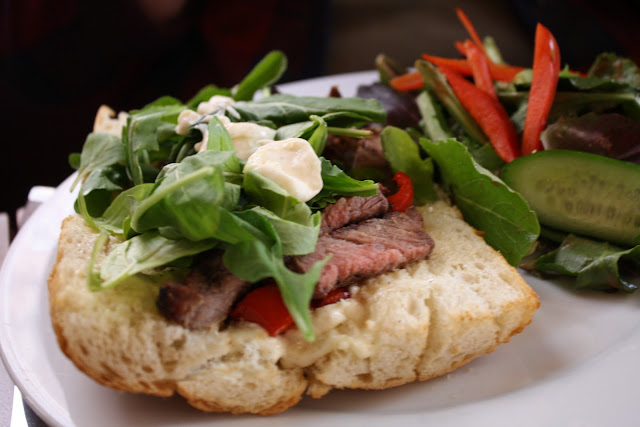 My mom had ordered her steak sandwich medium-rare as well. It had a little more pink than my burger, but just barely. 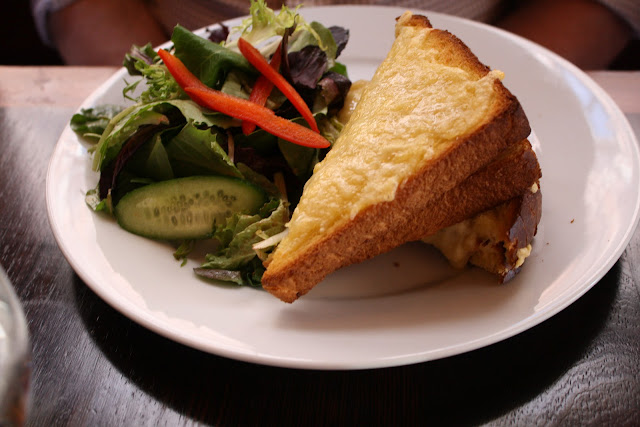 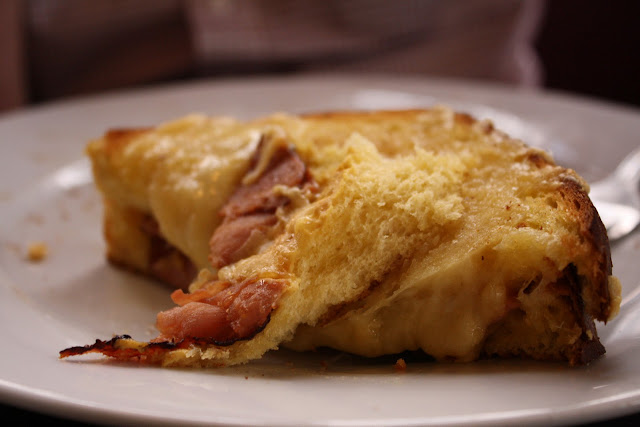 Thankfully, my dad really liked his croque monssiuer, eating all of it. 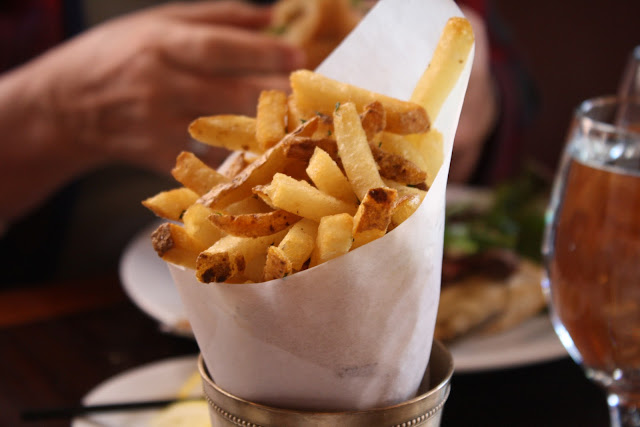 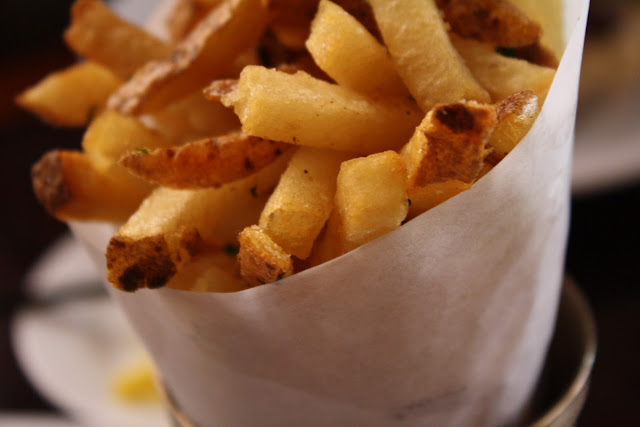 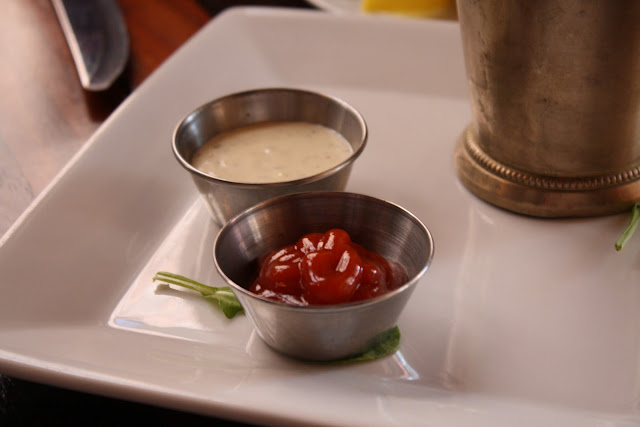 More than ten minutes after we received our entrees - so more than half an hour after we'd placed the order - we received our pommes frites. (I asked my parents if I should just send them back, but they said no.) They were enjoyable, although I missed the selection of several dipping sauces that I used to receive at Quadrupel. This had an interesting mayo but regular ketchup. (The cumin ketchup on my last trip was outstanding and I inquired if they still had it; the waiter couldn't give me a straight answer but it was obvious he had no idea what I was talking about.)

This was the least enjoyable meal I have had in quite a while. Apathetic service (the waiter ignored us for almost the whole meal, choosing instead to stand in the bar and watch Food Network on the flatscreen TV), incorrectly-cooked meat, and a bill three times the price of what it would have been had we gone to, say, Dog Haus or Congregation.

I have no idea if Quadrupel has a new owner or new chef or what is going on. I also don't understand how everyone else knew to stay away and I didn't. But I will from now on.

u shoulda brought home that knife!

Who says I didn't? Nah, just kidding. True, it felt like they were stealing from me, but two wrongs don't make a right.