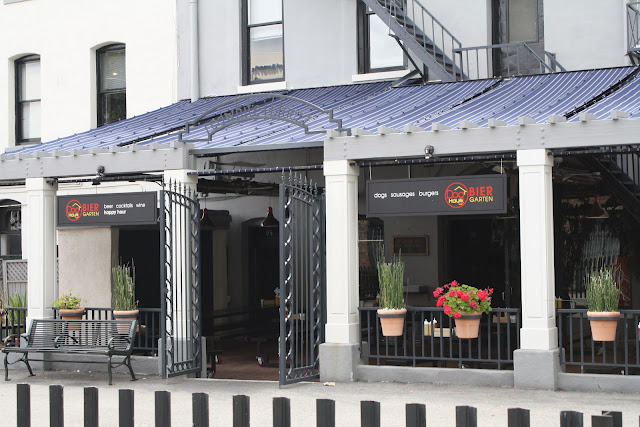 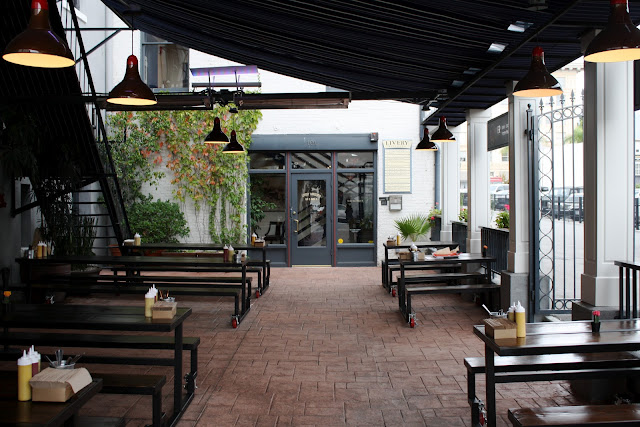 Dog Haus Biergarten has only been open for a few months but I'm going to miss it as much as most other restaurants around Pasadena. Once upon a time there were quite a few options for inexpensive dining in Old Town that I liked, whether it was the two sandwiches and pitcher of beer that my friends and I would split at Rack Shack, the tacos at Ernie Jr.'s or the slices of pizza from Bada Bing.

These days there are cheap places and there are good places and they don't really overlap. But Dog Haus Biergarten allows the two of us to get a couple burgers and sodas and split an order of fries for right around twenty bucks. In Old Town, where some places get four bucks for a single slice of pizza and others get fifteen for a deli sandwich, I've always been happy with that arrangement. And if I'm in the mood for a beer, well, they have that too. 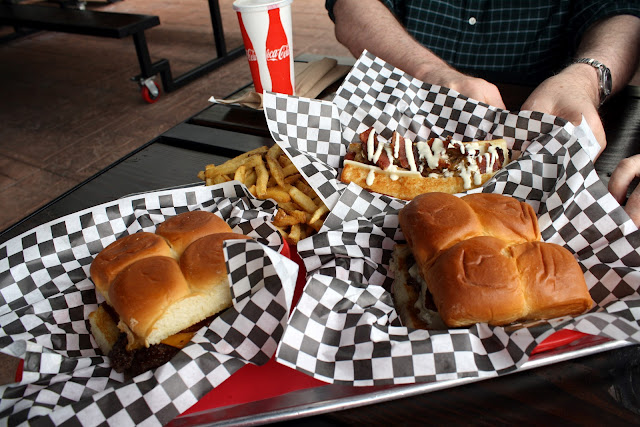 The other day I stopped by for lunch with my parents, an easy trip for all of us but especially so for my dad: from our table on the patio I had a view of his office a hundred yards away. We ordered two burgers, a hot dog, fries and three sodas; it was twenty-five bucks pre-tax. (On our last lunch in Old Town, the name of the restaurant which needs not be repeated, the total was about three times that for much lower quality food.) 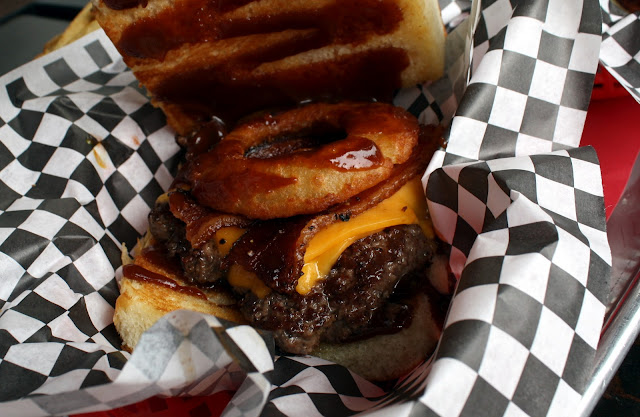 My mom ordered the Ringer: a burger with cheese, smoked bacon, barbecue sauce and an onion ring. She thought it was very good. 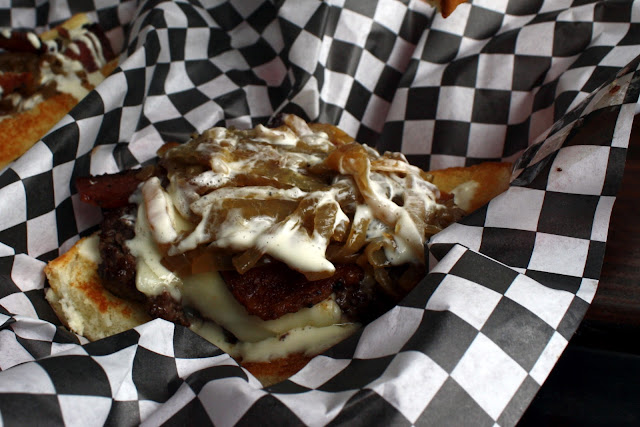 My dad went with the Holy Aioli. If you've been a reader for a while you've seen it before: Elizabeth gets it every time and it cracked the top 15 of my Top 20 For 2011: a burger with bacon, cheese, caramelized onions, and aioli. My dad thought it was fine although he did not care for the sweetness of the King's Hawaiian rolls. But take his opinion with a grain of salt: "Bread is just a vehicle to make it easier for me to eat the meat," he claimed. 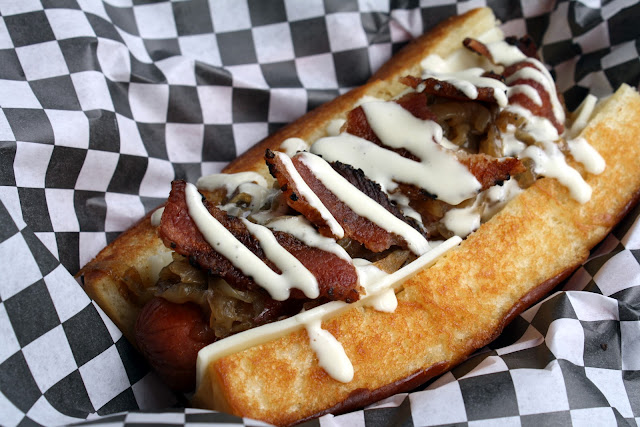 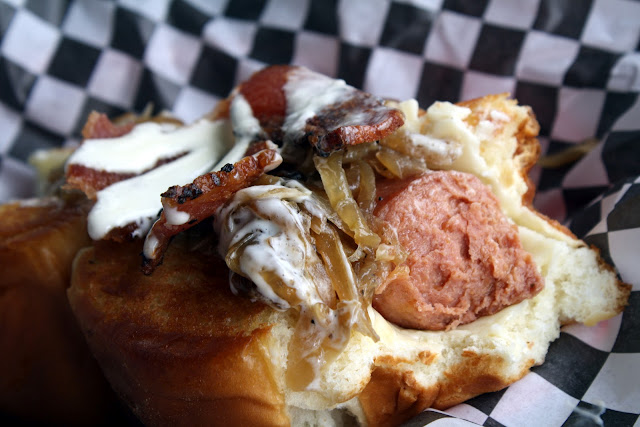 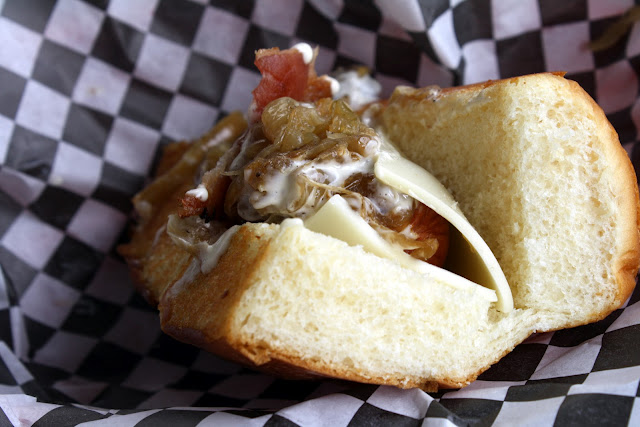 I had the Scott Baioli: basically the Holy Aioli in hot dog form, named after the star of my favorite sitcom of the 80s. Did I like it? Hell yes. Did I love it as much as the burger? No, not really. I think the toppings are better served on a burger. 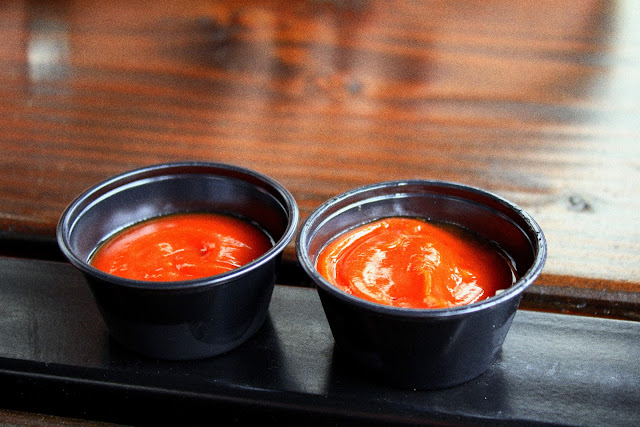 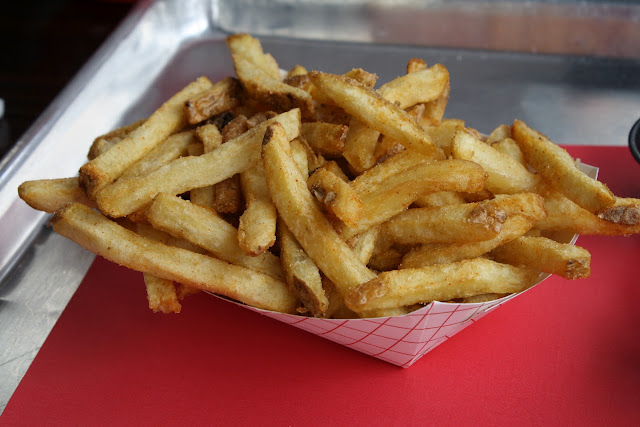 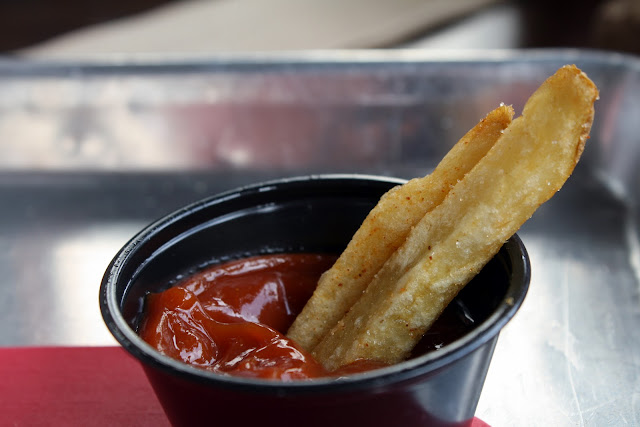 As usual, I got some of Dog Haus's curry ketchup for the fries.

It was a good lunch. So good, I went back later in the day and got another dog. 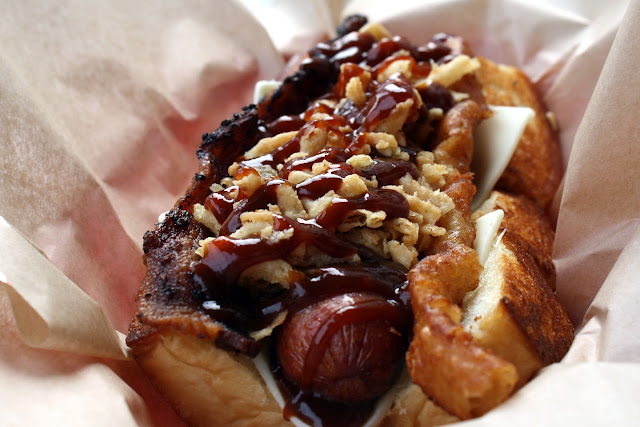 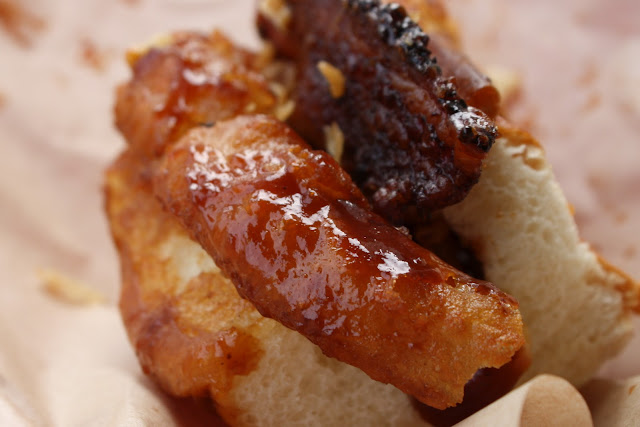 This time I got the Cowboy: American cheese, onion rings, barbecue sauce, bacon and crispy onion bits. It was great.

And I may even go back again in the next four days.

I think your posts from here are going to be some of the ones I miss the most.

dang pp its like one of my boiz from high school is movin to da big city! one luv pp!

I have no idea what you just said, but thank you, I think.

Hey Justin. I don't particularly like reading but my wife says I should do it more because I'm getting dumb. I'm ashamed to say that I've never seen your blog till today. Actually, I think your blog is the first blog of any kind I've ever read but I wanted to thank you and let you know that you've inspired me to start updating again.

The Ringer looks awesome! A lot of burger people poo-poo bbq sauce on a burger, but I think it's great when paired with smoked cheddar and bacon.

Mark Lim: Never seen my blog... And yet you still call me pp? Seems dubious. Glad to hear that you'll be updating again, I've always loved your caloric adventures.

Mike: A lot of people poo-poo anything that isn't exactly what they like, as if they missed the day in 3rd grade where you learn the difference between fact and opinion. If you like it, do it.