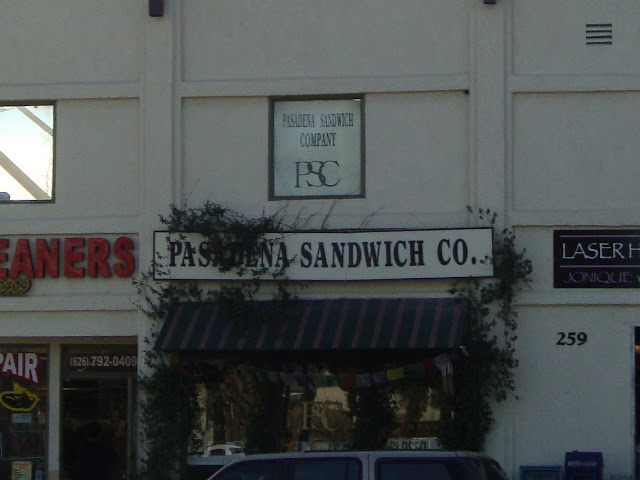 It occurred to me this morning that Elizabeth is in New York for the next few days and she took our laptop with her - the one with all my photos on it. But I have a few photos on our Netbook. Unfortunately, the Netbook is one of the three worst purchases I have ever made - behind a fried shrimp dinner on the Montana Hi-Line that left me sick for days and a DVD of Karate Kid Part III. When I was 18 I had a laptop with a 28.8k modem, and I believe that was faster than this Netbook. If our regular MacBook is Usain Bolt, this Netbook is John Candy.

So I'm not going to write a whole lot this morning. But I do have some pictures of my last trip to Pasadena Sandwich Company from a month ago. I wrote about PSC a little more than a year ago. I speculated that, while the sandwiches were good, the popularity of the place probably owes more to the prices and portions than the quality of the food or the service. This trip confirmed that.

I was helping out an acquaintance at his work for the afternoon and he said he would buy me lunch. I said we should get sandwiches from PSC. I called to order them at 12:40. "The cooks are getting a little backed up," the girl told me, "so why don't you come in 30 minutes and that way they'll definitely be ready."

I got there in 30 minutes, paid and waited around. For another 35 minutes. Finally, at 1:45, she handed me the two sandwiches. 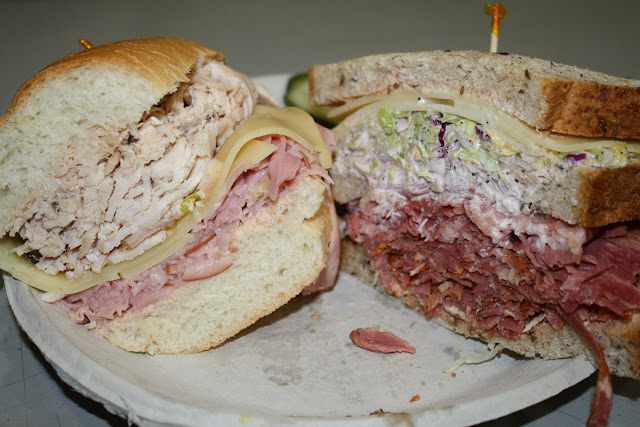 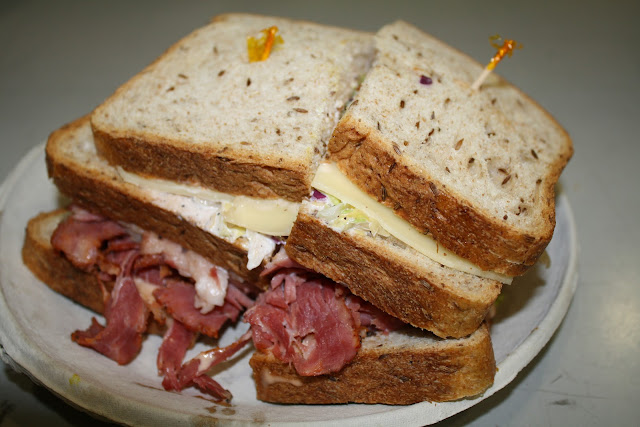 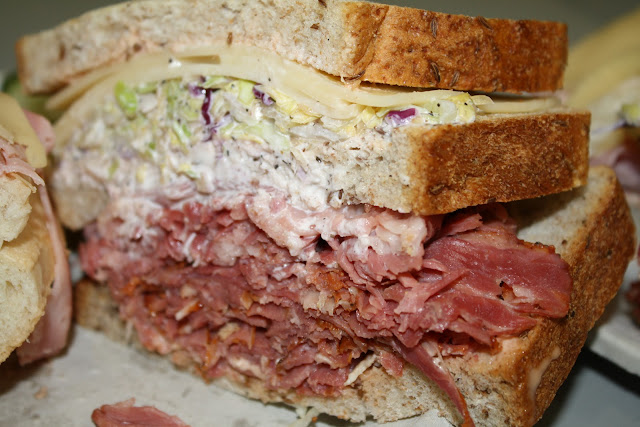 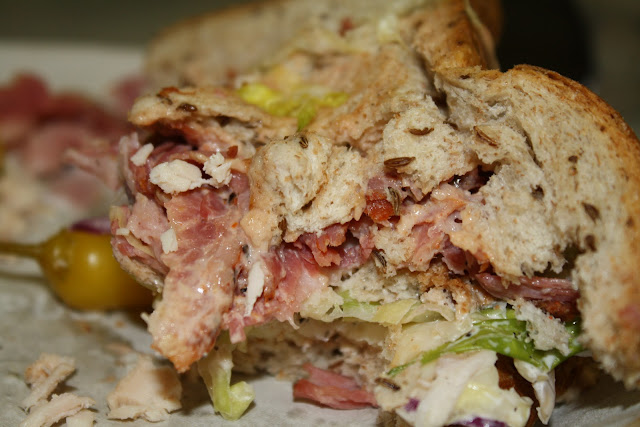 The Chicago: corned beef, pastrami, Swiss, cole slaw and Russian dressing on rye. This was not very good. The meat was fatty, the bread was stale and there wasn't enough slaw. 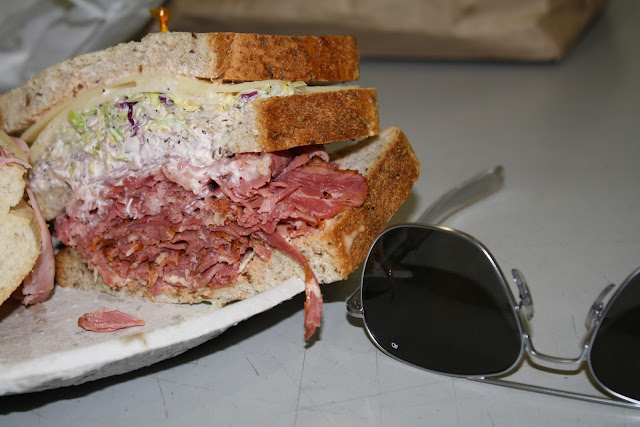 But at least it was big. Here is a picture next to my sunglasses for perspective. 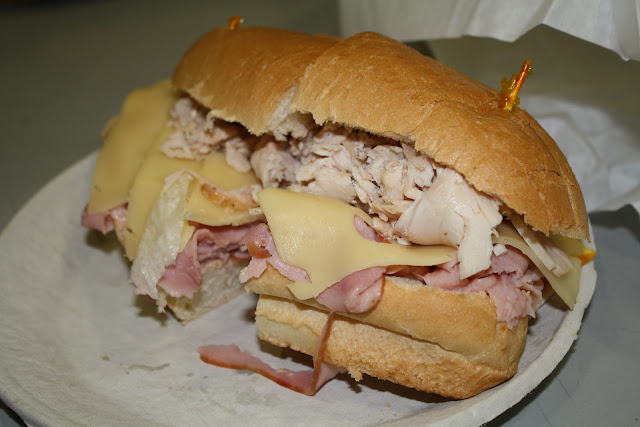 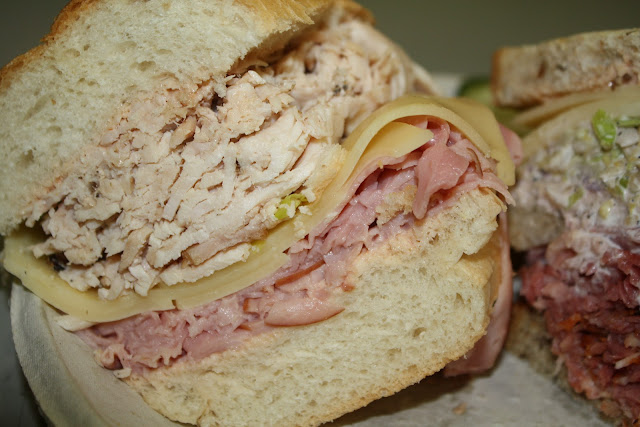 The New Yorker: turkey, ham, Swiss and Russian dressing on a French roll. This was delicious. The roll was fresh and soft, pretty much the exact opposite of the rye, and the meats were very good.

This was my last time at Pasadena Sandwich Co. If they had been friendly or apologized for making me wait twice as long as I was quoted, maybe I could handle it. If both sandwiches were delicious, maybe then, too. Their service has always been slow, but this time was just too much: 65 minutes for two sandwiches, only one of which was good? Not worth it.
Posted by JustinM at 10:26 AM

I thought the pastrami was bacon.

dude i hate when take out aint ready when u get there. its like wtf dude if its gonna be an hour fine just tell me itll be an hour so i can sit on my fat ass at home while playing xbox instead of standing around like a jackwagon in your damn restaurant!!!

on a side note pp: did you read the si story on ucla's bball program? wacky stuff, yo.

Most days I wouldn't really care, I'd just sit in my car and listen to AM 570 as callers passionately defend Kobe like it's still 2006 and he isn't killing the Lakers. But considering I was actually working that day, helping my friend out because he was slammed and NEEDED help, I was very annoyed.

Of course I read the SI article. I have long thought Howland is an unlikeable man so none of it surprised me. If you refuse to coach offense and you're a dick, you better be successful. These last couple of seasons, there is nothing enjoyable about watching this program.

Believe it or not, just the other day I had the best Pastrami Sandwich from Jersey Mikes. Hold the 'kraut, extra 1000 and then done up "Mike's Way". YUM YUM!