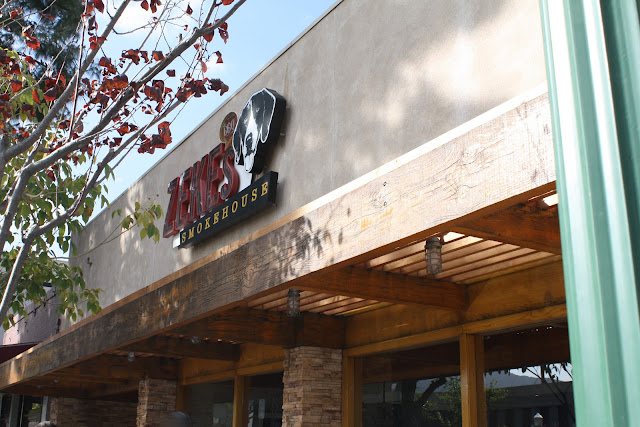 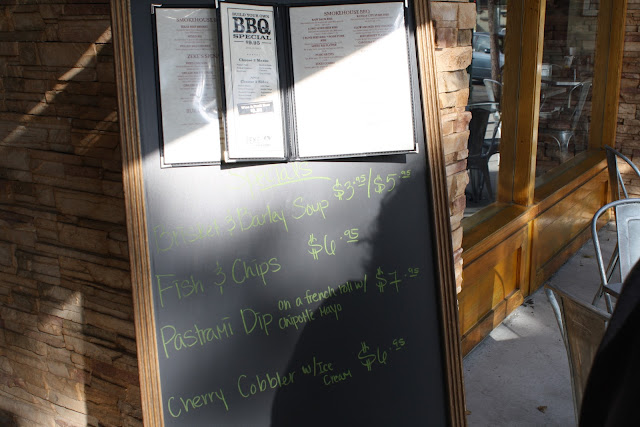 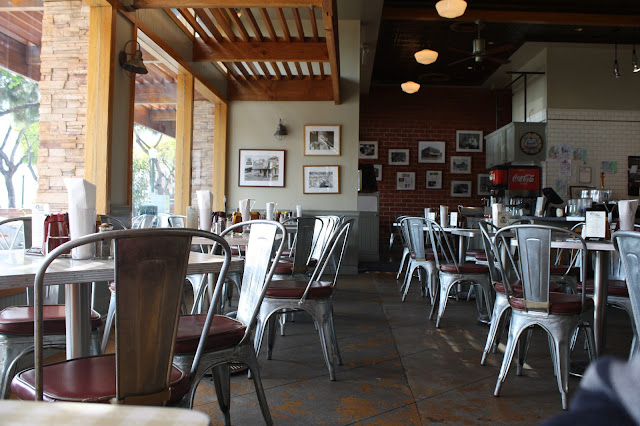 It was an interesting day. It was February and hot; my morning walk left me sweating like it was August. Before the day was half-over I had witnessed a fistfight over the value of Donovan McNabb in 2004. I almost bought a wine glass that purported to hold an entire bottle of wine before realizing that I would never actually use the thing. I baked a cake. Later in the afternoon I saw Jonathan Gold in person for the first time, not at a restaurant (I'd always secretly hoped to first spot him eating at a KFC or something) but rather a store specializing in all things dinosaur.

So when my friend Carla called me and asked if I wanted to go to lunch, I did not bother to ask why she was not working on a Tuesday, I just said sure. We talked briefly about what we wanted; I said Chinese or barbecue, which is pretty much what I feel like for every non-pizza meal.

"It seems like whenever we get barbecue we go to Zeke's," she said.

We headed up to Montrose in the mid-afternoon. There was only one other table occupied, and by the time we finished lunch we would be the only customers in the house. 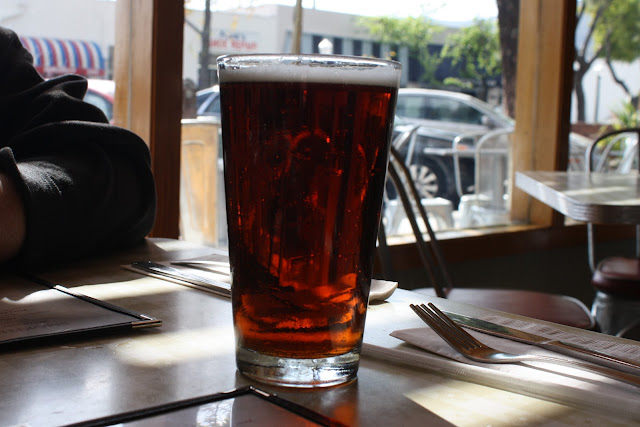 I wasn't in a beer mood but Carla ordered a Shiner Bock without hesitation and I switched from my iced tea idea. "I'll take one, too." It could have been colder, but still tasted nice on a warm February afternoon, the sunlight bouncing off a car just outside the window and forcing me to wear sunglasses for the whole meal. 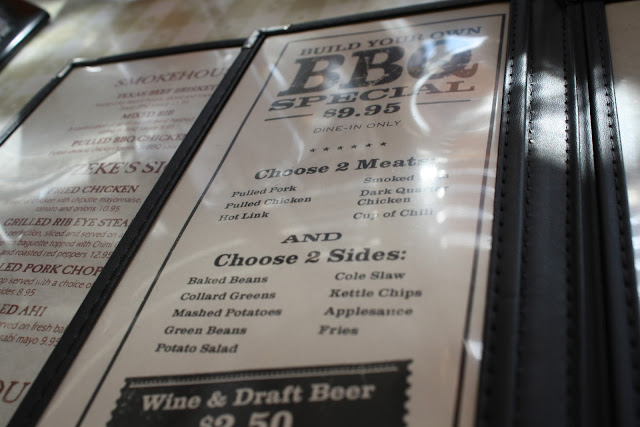 I haven't been to Zeke's since last summer and the menu has been shifted around a little. Not so much changed - I still saw all the regular items - but a little disconcerting that the menu I've have known for almost nine years looks so different now. 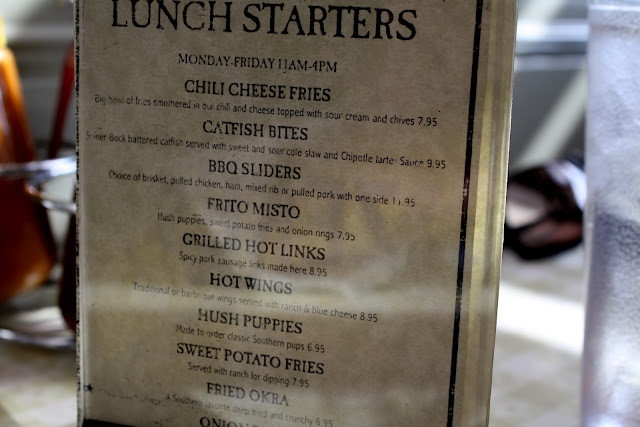 I wasn't entirely sure what "Lunch Starters" meant - I figured it meant appetizers, but some of the listed items came with side dishes, too. Whatever. Catfish bites sounded good so we decided to order the plate to split. It advertised coming with Zeke's "sweet & sour cole slaw," which I've always loved. 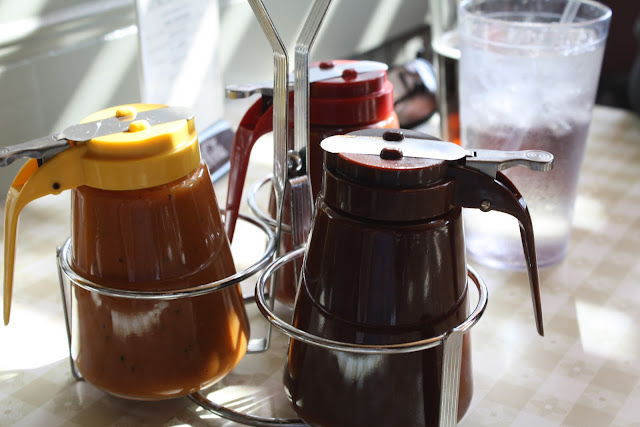 As always, there were three sauces on the table: the mustard-based, the sweet, and the "spicy," although there is nothing spicy about it. 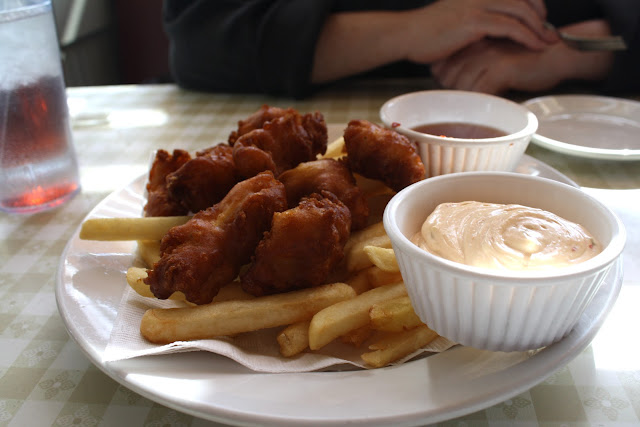 The catfish bites were much larger than I had expected, and they glistened in the sun and were extremely hot to the touch. As you may have noticed, they were served on a bed of fries. I have never liked Zeke's fries.

"What about the cole slaw?" I asked.

"We serve them with fries," the waiter replied. "So it's like fish & chips."

(Has anyone else noticed a trend lately of restaurants advertising their food one way and serving it another? This is the third time in 2012 I have experienced that, and all three times I have been given the same shoulder shrug of a response when I've brought it up.) 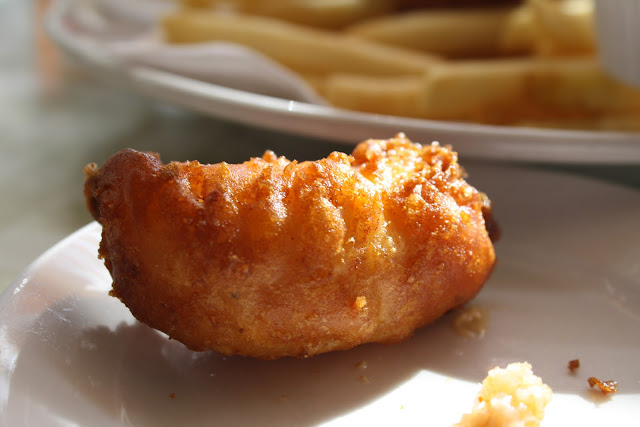 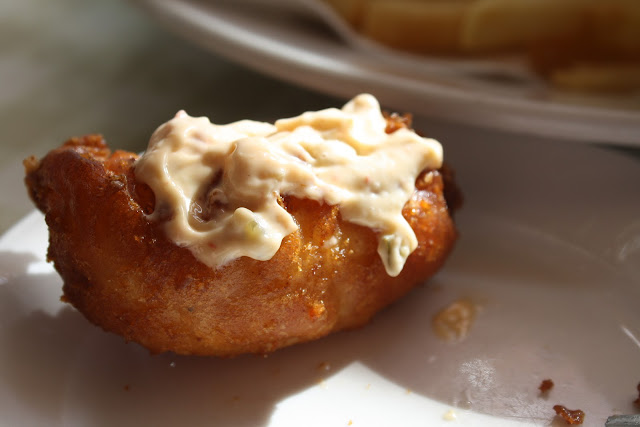 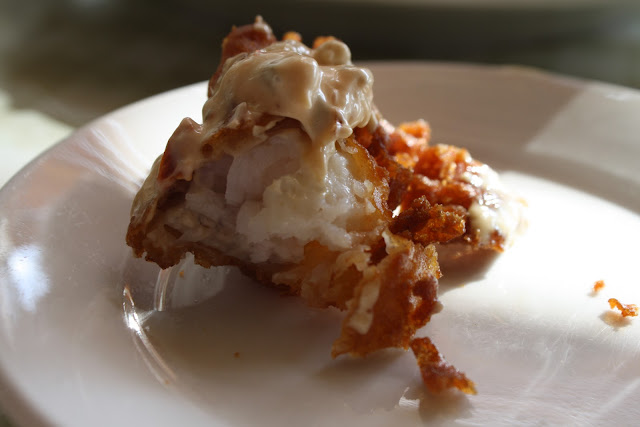 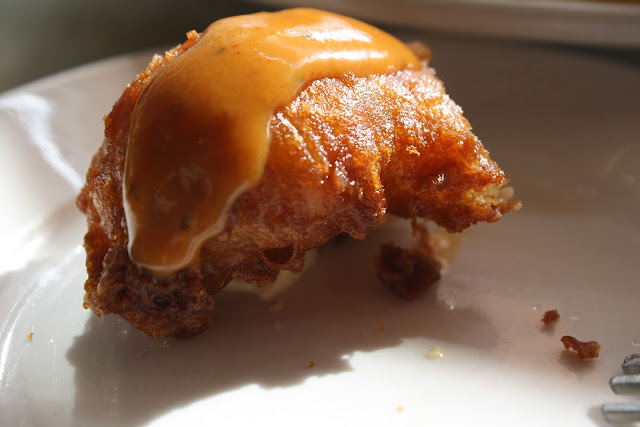 At any rate, the catfish bites were delicious. The fish was fresh and the batter was crunchy. I liked the chipotle tartar sauce, but found that the mustard barbecue sauce complemented the fish just as nicely. I would have been happy just eating these as my entree. 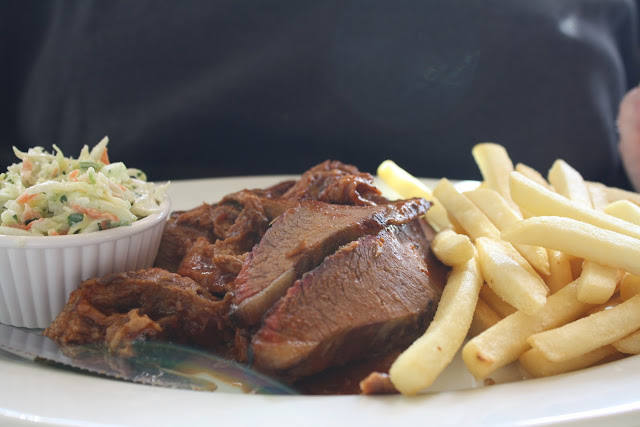 But we'd come for barbecue so that's what we ordered. Carla had the brisket plate with slaw and fries. (Of course she would not have ordered fries if she'd known they were coming with the catfish, but neither of us were in a complaining mood that afternoon.) She gave me a generous portion of her brisket, which I in turn reciprocated with my entree. 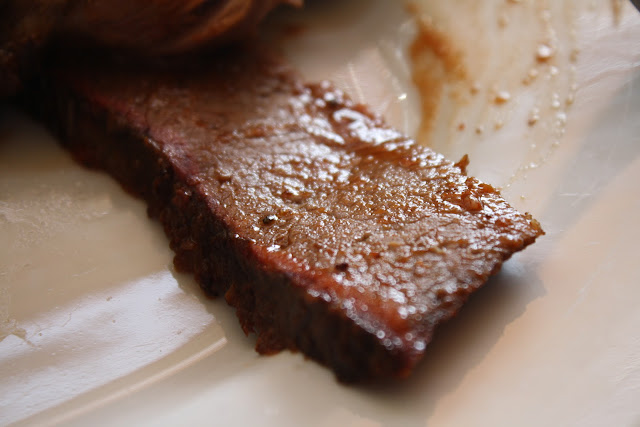 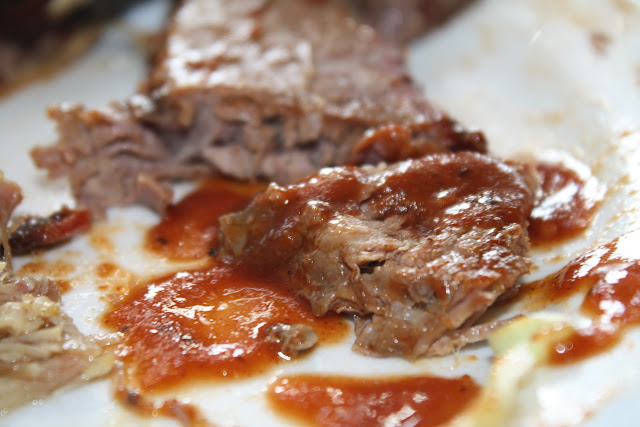 Though I have always been one of those "barbecue means pork, not beef" types of people, I have had the brisket at Zeke's several times over the years. Maybe 5 times. This was, without exaggeration, the best I have ever had at Zeke's. You could cut it with a fork or you could just pick up one end of the pieces with your fingers and it would fall apart. Just outstanding, tender brisket. 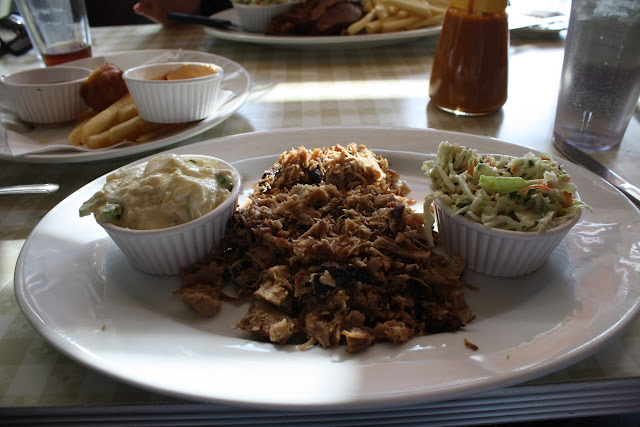 I ordered the chopped pork plate with slaw and potato salad. It was a generous amount of pork, probably close to a pound. 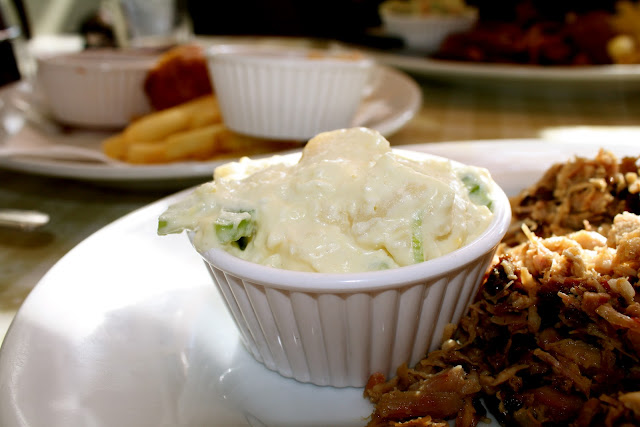 The potato salad was good. I prefer less-runny potato salads than this, the kind where potato is the main taste, not a mayo-based dressing, but even though this fell into the latter category I still liked it. 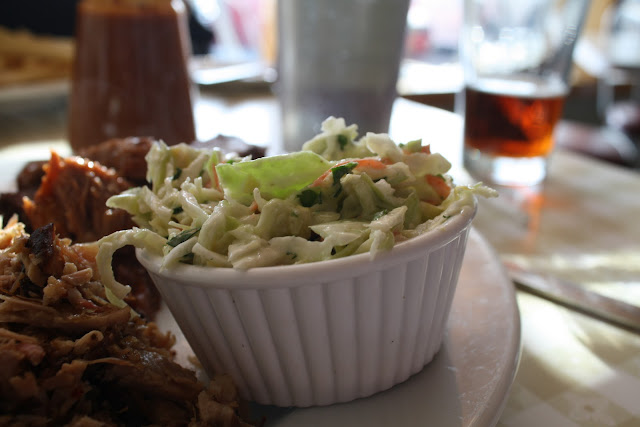 This is the regular slaw, not the sweet & sour version, but it was still delicious. 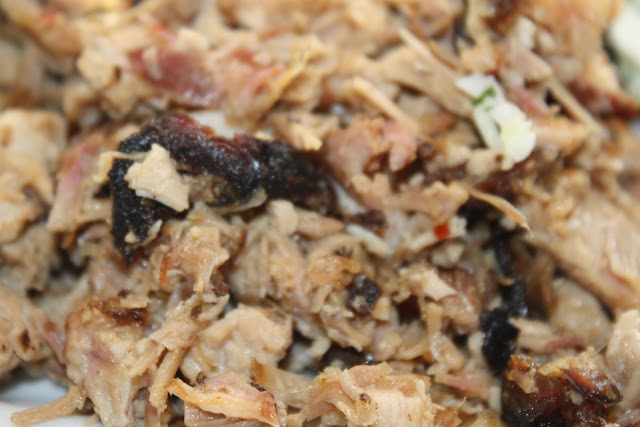 The chopped pork was not the best I have ever had at Zeke's - it was a little too fatty for me to call it great - but it was still good. 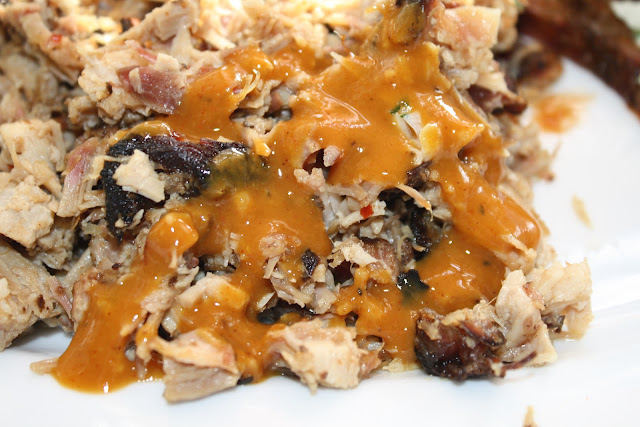 And made a little better with the addition of mustard sauce. 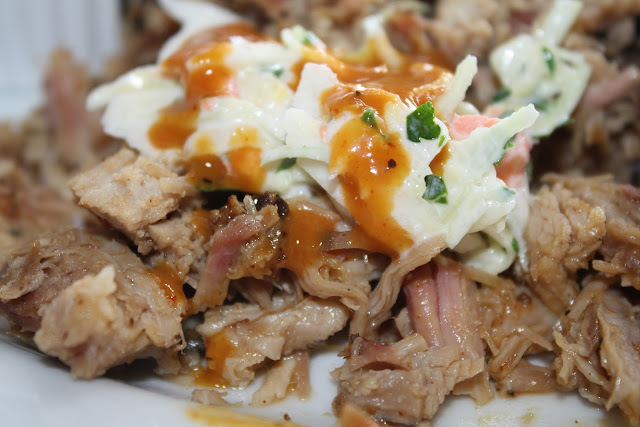 And better yet with the addition of slaw. 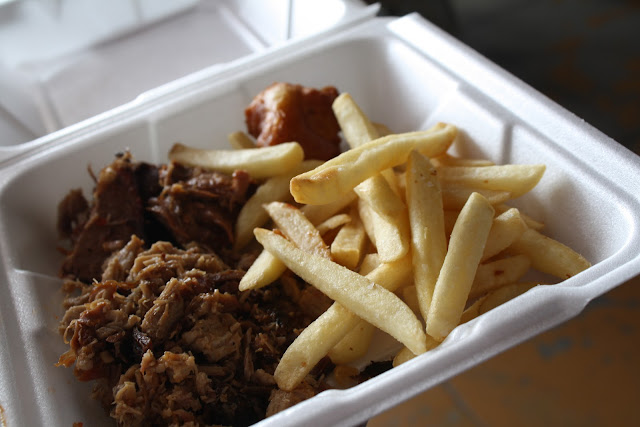 What I ended up taking home with me: half of the pork, plenty of brisket, one piece of catfish and all the fries.
Posted by JustinM at 9:30 AM

BBQ and coleslaw is a combination made in heaven. And that catfish looks delicious!

Seriously... this is one of the best places to eat in a 10 mile radius. Fantastic food. You took some great pictures. The only gripe I have is the staff always underwhelms. They're a little unprofessional; cordial but not personable. Tiny gripe, just go for the food.