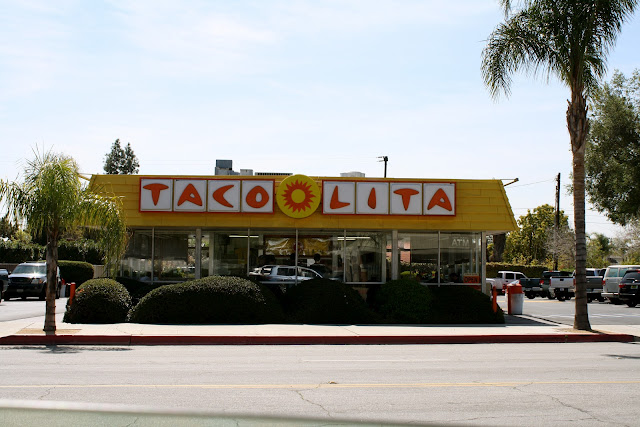 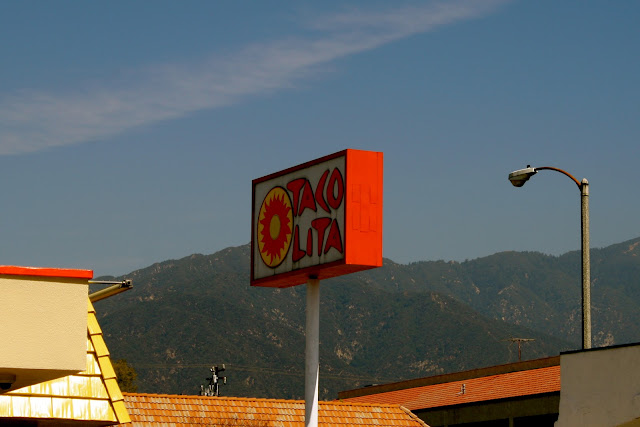 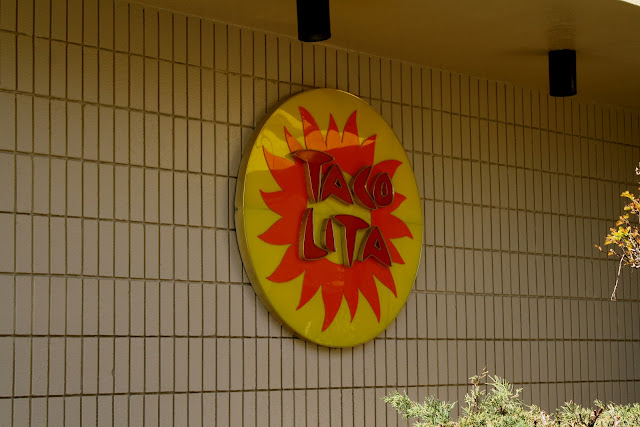 Ah, Taco Lita. There is probably no other restaurant whose food I have eaten more times in my life. Not Hutch's, not Rick's, and probably not even In-N-Out. Friday Tacos from Taco Lita, their "5 for the price of 4" special were once as immutable a routine as catching every Lakers game.

My grandparents sold their house and moved to a condo on Duarte Rd in Arcadia when I was 12; the thing that excited me most about it was its location a block and a half from Taco Lita. After Friday night basketball games in high school I would often order two of the aforementioned Friday Night Specials - I never ate all ten tacos, though once I managed nine. (These days three is enough to satisfy me; like my high school body fat percentage or ability to dunk a basketball, those days of eating more than six tacos are long gone.)

For three years in my mid-20s I worked in Sierra Madre and the image of my dad stopping by on Friday afternoons with a sack of tacos for me will never be forgotten. (He had to place his tacos on the roof of the car so that the dog - his constant car-ride companion - wouldn't eat them while he came in to deliver mine.)

These days I don't make it to Taco Lita nearly as much as I used to. It had been months since I'd had any. But I couldn't leave the San Gabriel Valley next week without one last trip. So I stopped by for lunch yesterday. 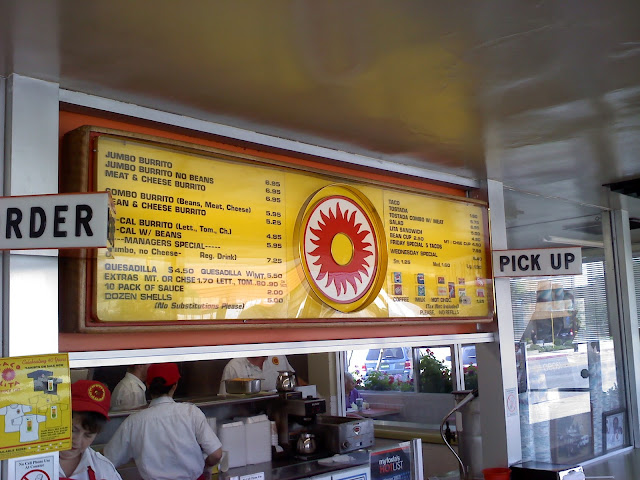 Not much has changed over the years. The menu board is the same as it's been as long as I can remember. The place is always crowded at lunchtime. The employees are friendly and there are always a lot of them working hard to pump out the orders. (It's not uncommon to see people come in to order for their office and walk out with 25 tacos - though when the taco-making line is humming along with impressive precision, those 25 tacos will be turned out in less than three minutes.)

The one thing that has changed, and changed a lot, is the price. When I remember ordering those tacos as a teenager they were 75 cents. The last time I wrote about Taco Lita, in February of 2009, they were $1.55 each. Now they are $1.90. The way of the world, I suppose.

I ordered three tacos - $6.20 - and took them to my car to listen to the Angels game. (Just as El Taquito Mexicano's al pastor tacos have replaced any longings for Taco Lita's, the Angels have long since eclipsed the Lakers with my sports devotion.) 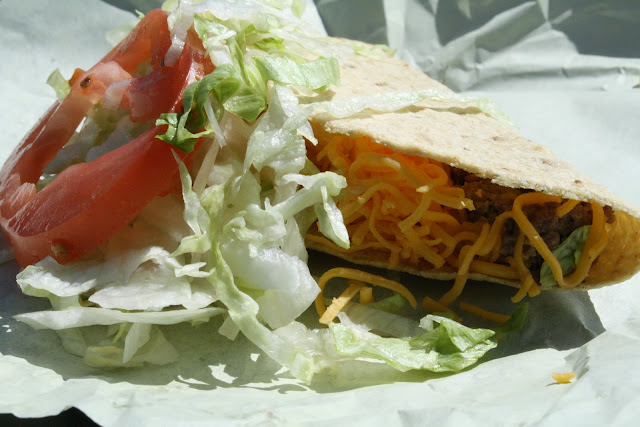 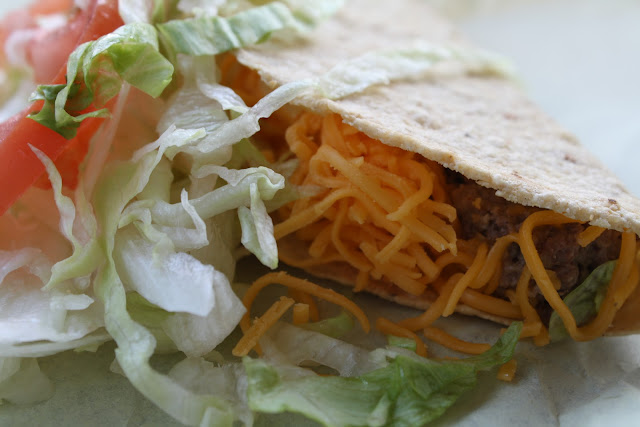 The thing about Taco Lita's tacos that I will tell you upfront is that I have no problem with people - and there are many people - saying they don't like them. The shell is hard and the ingredients aren't really special, though they do give you a nice amount of beef, cheese and lettuce. As I'm sure you can tell from my opening paragraphs, Taco Lita has always meant more to me than just its food.

But by no means does this lessen my love for the place. Because for what they are, the tacos are fantastic. Some people like to point out that this are not "authentic Mexican" tacos, as if that is some kind of a dig. They are not authentic but I don't expect anyone orders them expecting a Mexico City street taco. They are crunchy, full of fresh ingredients and juicy meat. If loving that is wrong, I don't wanna be right. 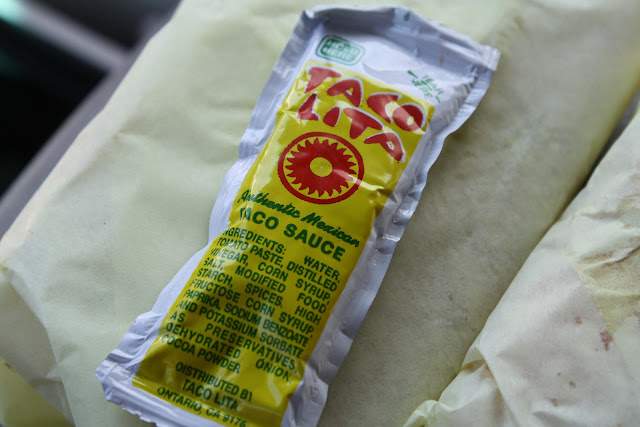 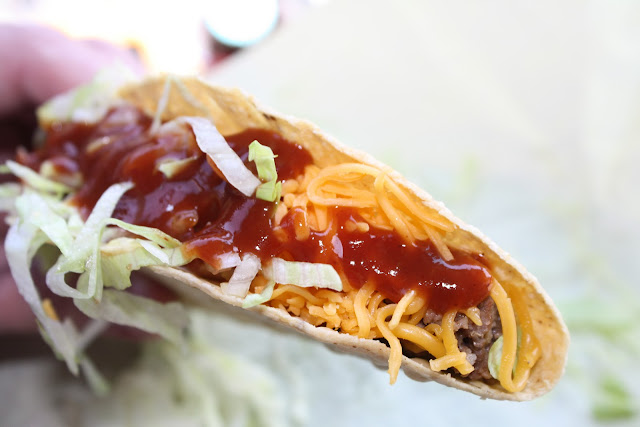 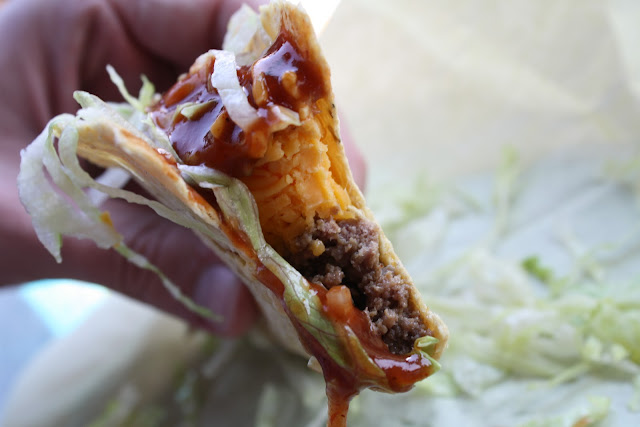 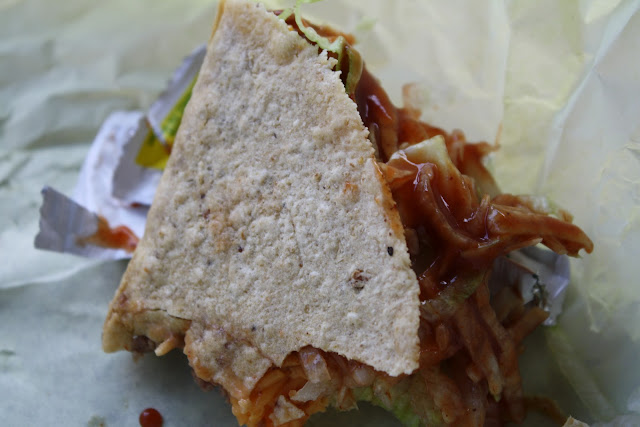 I squirt two packets of sauce on the taco - although sometimes, if I'm in the mood, I add three - and begin eating. It's a taste of instant familiarity. If feels as if I have been eating these as long as I can remember. Because, of course, I have.

I ate all three tacos and felt satisfied, though I still considered ducking back inside and getting two more. But I didn't. They'll have to wait.
Posted by JustinM at 10:15 AM

Fantastic. I want those.

I searched your blog for "TACO NAZO" but did not find anything. You need to try their Fish Tacos... probably the best that I've ever had in my life! They're in El Monte near San Gabriel/Rosemead

Oooops... I meant it's near Rosemead/Garvey Ave!

Wow. Nope, never been. I can't make any promises because I'm leaving in ten days, but I will try.

At first I was like, WHAT, you can't eat more than 3 tacos (this is my fresh from Guatemala, where tacos are 3-biters). But after the pictures, I understand. Glad you made a last hurrah lunch go round before taking off.

Oh no, I CAN eat more than three - several more - it's just that three is enough to satisfy me. I don't play basketball for 20 hours a week anymore so eating 9 tacos isn't as good an idea as it used to be.

I miss that place

I grew up eating Taco Lita but now live over in Europe, and I never, repeat never, make a stop in LA for work or otherwise without making the trip out to arcadia to get a jumbo burrito. I actually bought a bag full of them to eat on the plane coming home once, and got stopped at security who wanted to confiscate them. My solution? I stood in front of security and ate three jumbo burritos right there on the spot! I wasnt going to allow the security guys to get my burritos!

mmmmm.... Taco Lita I think I'll have that today.

Enjoy. You will probably be the only Hispanic there, though...

Actually I sent a white guy to get it for me. XD it was good haven't had it in a while.