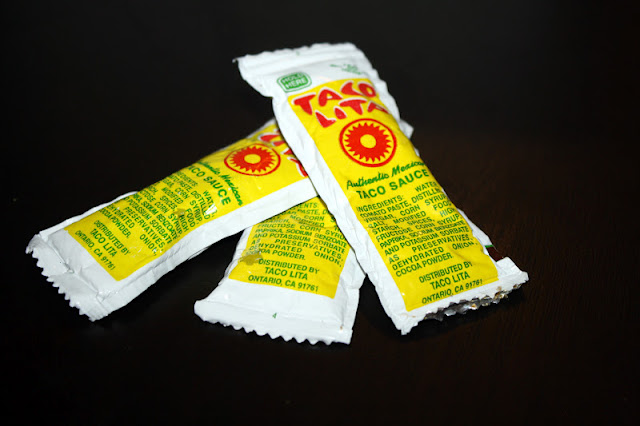 In one of my favorite episodes of Ken Burns's Baseball, the opening features the writer Robert Creamer, reminiscing about his youth:

"When I was in the army I was lonesome, I missed baseball. There was a World Series. I went to the PX to listen to the World Series game on the radio. And I was sitting there feeling a long, long way from home.... And an old sergeant came in. He's sitting down in front of me and he took out a cigar and lit it and that cigar smoke drifted back into my face. And I could smell the Polo Grounds. I felt at home."

Look, I'm not sitting around pining for Pasadena. It's exciting here, and this was all about making a big change in my life. It wasn't supposed to be easy. But there are of course several things I miss. And when it comes to food, there is one thing that I have been missing most of all. It's not a Double-Double (which I expected it to be), it's not Zankou Chicken, and it's not even my local taco truck. It's those Americanized tacos from Taco Lita, crunchy and fresh and slathered with that delicious hot sauce.

So you can imagine my excitement when I opened a drawer yesterday, looking for a pen, and found three packets of that taco sauce. I didn't think any of them had made it back here with me. Seeing those three yellow packets reminded me immediately of home and the above quote from Baseball. For a second I felt like I was back at one of the orange tile tables with packets of hot sauce in front of me. 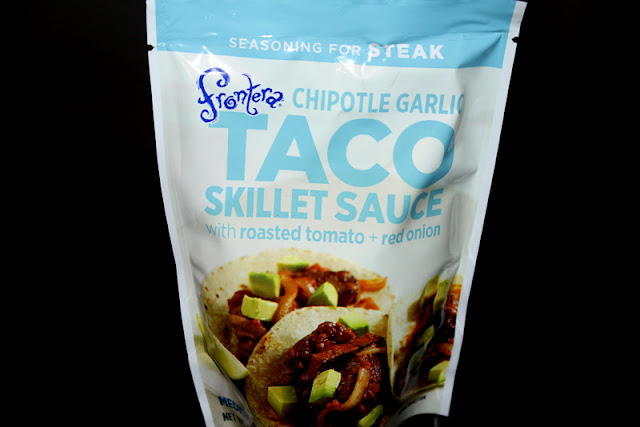 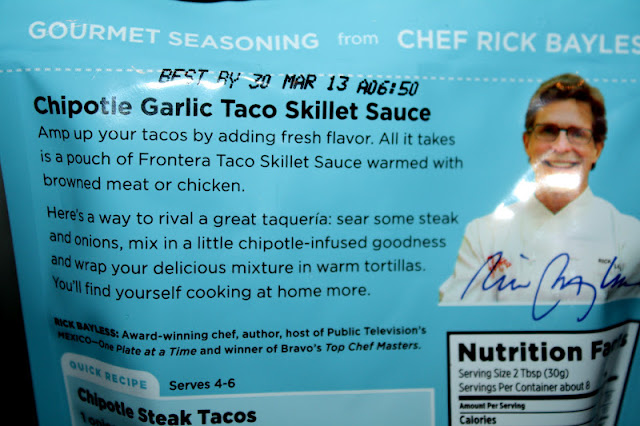 Twice before I've used Rick Bayless's taco seasonings - the chili and cumin sauce for some beef tacos I made back in January, and the key lime and cilantro sauce for shrimp tacos I made in March. (The former was delicious; the latter was good but much spicier than I'd anticipated. I made them for myself and my parents, who really didn't enjoy the heat.)

Since chipotle and garlic are two flavors I love, I figured I'd give it a try. 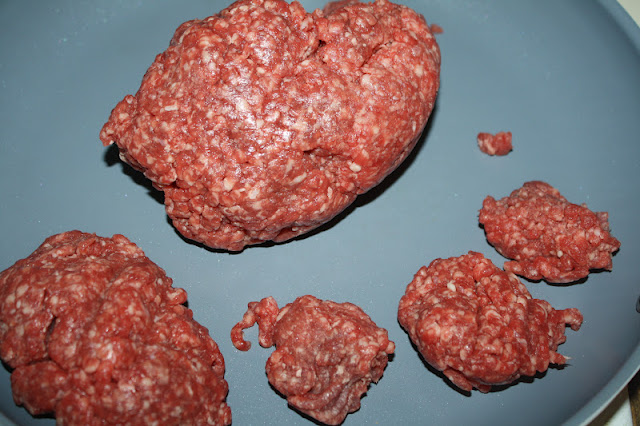 I got a pound and a half of ground beef. "Did you get it at Paisanos?" Elizabeth asked me later.

"From now on, just assume that's where I get every meat unless I tell you otherwise," I said. 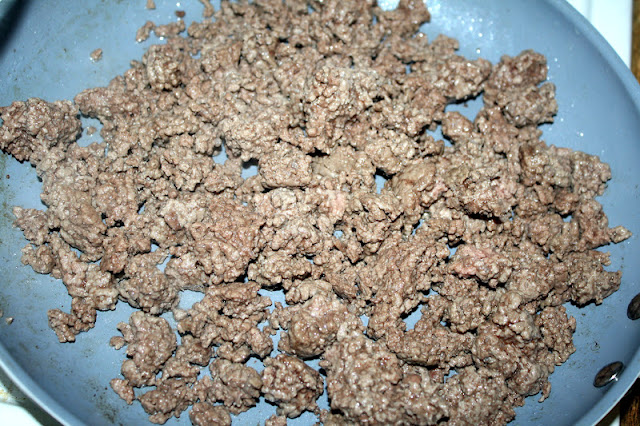 Not long after we arrived in Brooklyn, we were watching HSN one night (yeah, that sounds funny to me, too) and saw Todd English hawking his Greenpans. (We'd seen them before a year or two ago.) We were in the market for a new set of pots and pans and HSN was offering them on sale that day, so we figured let's give them a try.

Some of the reviews (a lot of them, actually) say that the Greenpans lose their non-stick properties after a few months, and that may indeed be true, but so far I really like them. I browned the ground beef in the pan, probably five minutes or so, and drained most of the fat. 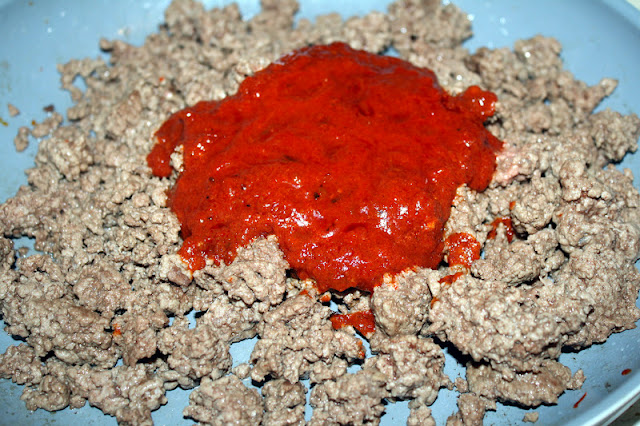 Then I added the chipotle-garlic sauce and mixed it up. 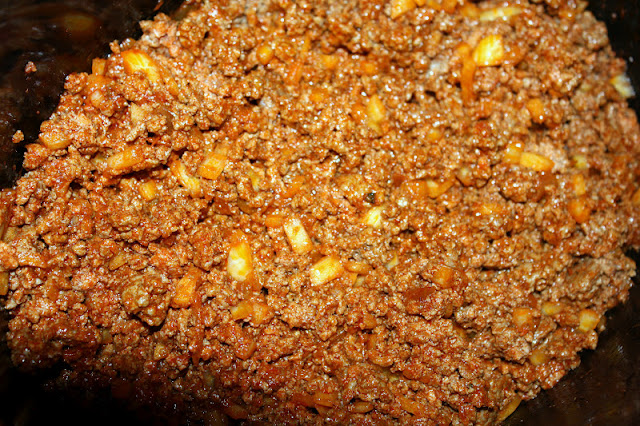 I had already diced up half an onion and placed it in the slow cooker before I browned the beef. So I added everything together, set the dial for low, and closed the lid. I left it alone for four hours. 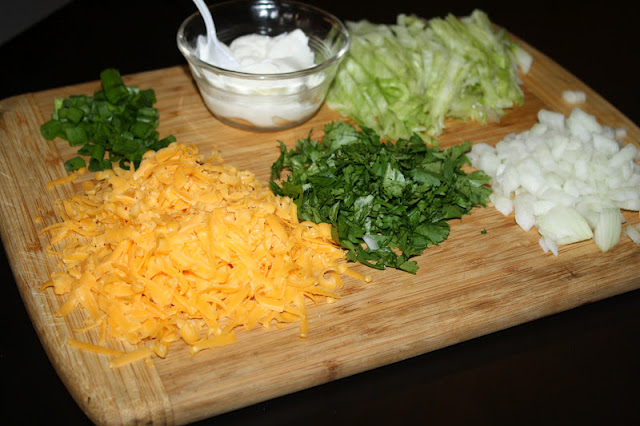 While Elizabeth was on her way home I prepared the accoutrements: extra-sharp cheddar, diced sweet and green onions, cilantro, lettuce, and sour cream. 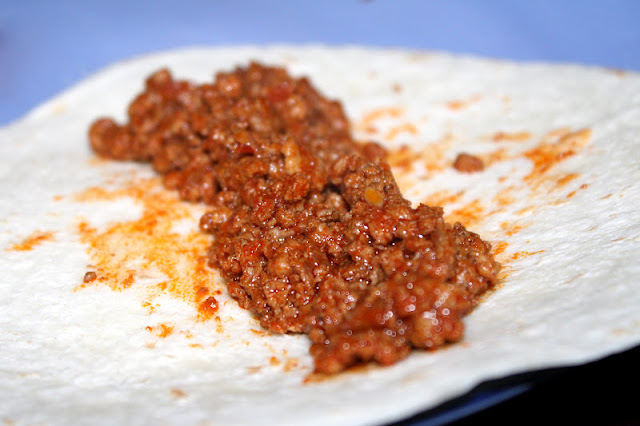 After those hours in the slow-cooker, the onions caramelize and meld with the flavors of the sauce and beef. And the smell is awesome. 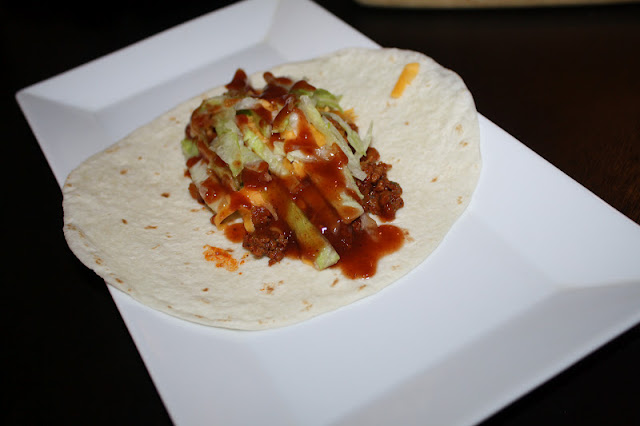 I like both flour and corn tortillas and I don't care if they're soft or hard. But Elizabeth prefers the soft, flour variety, so that's what I used. 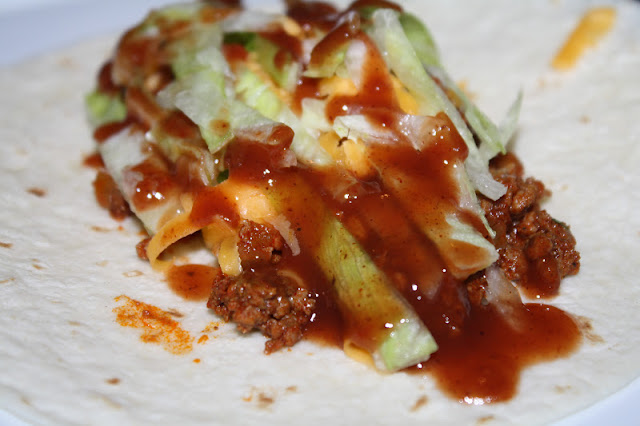 I made my first taco the way I have been eating my Taco Lita tacos for years: meat, lettuce, cheese, and a packet of that sauce. Damn was this good. 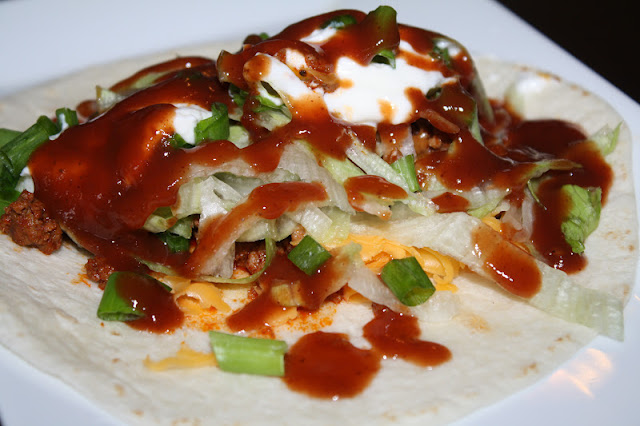 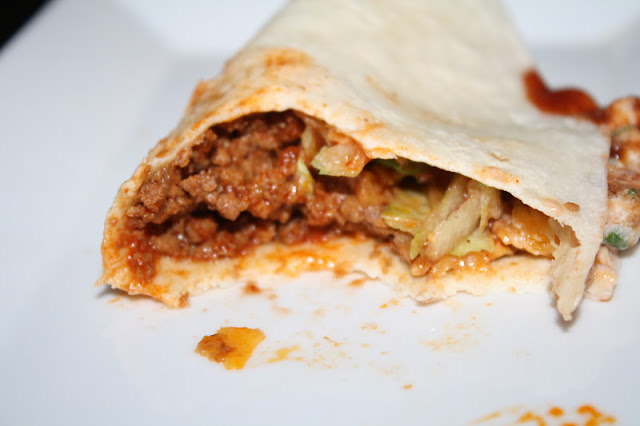 For my second taco, I added sour cream and used not one but two packets of sauce. Also good. 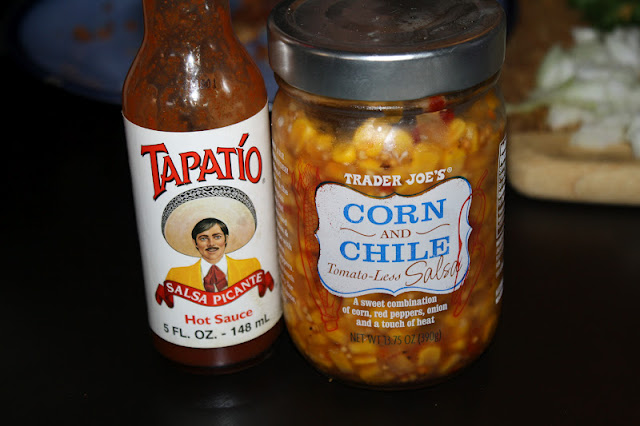 Elizabeth had cut open an avocado - I did all the prep work but I refused to slice the avocado for her - and placed it on the table. I put these two items in front of it so I didn't have to look at the avocado while I ate.

"Did you just build a wall so that you don't have to see the avocado?" she asked, in that way people sometimes ask questions and laugh simultaneously because they already know the answer. 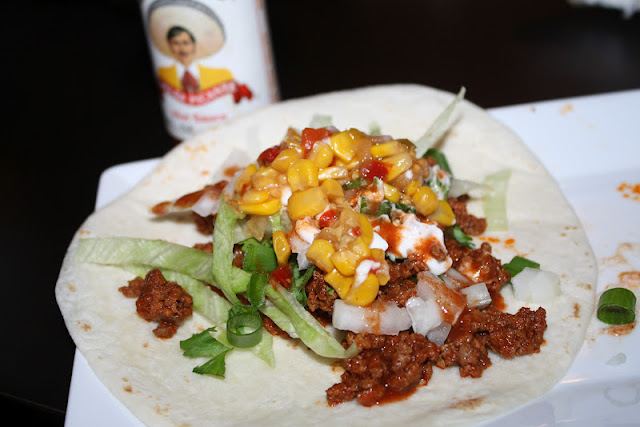 For my third and final taco I decided to add some of everything, plus the Trader Joe's corn and pepper salsa. I ran out of my Taco Lita sauce so I used Tapatio.  This was my least favorite of the three tacos, but it was still very, very good.

I need to start making tacos every week.
Posted by JustinM at 10:00 AM

Those tacos look amazing! I love a good American style taco myself. You would have been so proud of me i made sliders for dinner last night and the hubs said they were so good. This is what I did: Hawaiian Sweet Rolls, heated up with butter, just to be warmed up. Sauteed onions, cheddar cheese and a "secret sauce" with: ketchup, mustard, mayo and sweet relish. Nothing fancy but it just made me think of you and your blog! Hope you are adjusting to the big city well!

I am quite proud of you but also curious: what the hell do Hawaiian sweet rolls taste like when you add butter? They already taste like they have been injected with butter. I am going to have to try this now.

They taste fabulous. I didn't spread more butter on them but just used the pan that I sauteed the onions in (which was butter). The pan was smoking hot and slick from the butter so I figured it would be a good vechile grilling.

Where did you get the Rick Bayless seasoning from? Love him!

A local market. When I was in SoCal I got them at Whole Foods, if you have one of those nearby.