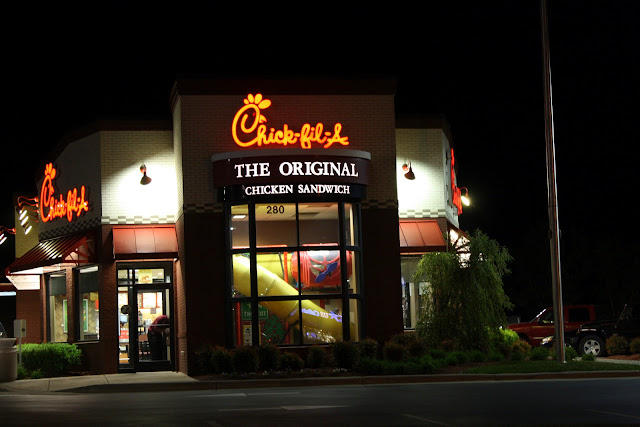 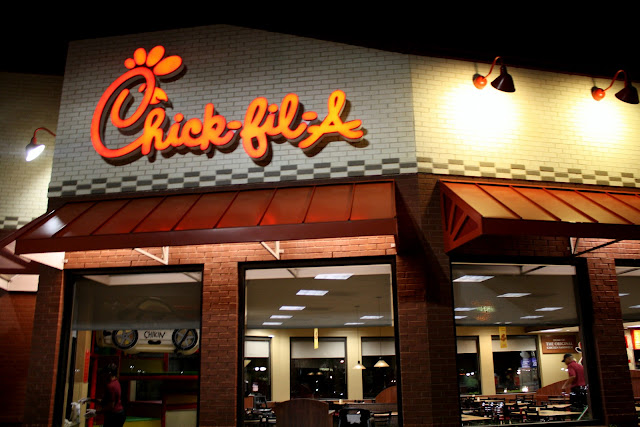 Either I'd never been to Chick-fil-A or I'd been so long ago that I can't remember anything about it. Either way the feeling is the same.

Quite a few times over the years when I have written about a fast food joint's fried chicken sandwich, someone has mentioned that I needed to try Chick-fil-A's. So I wanted to eat at Chick-fil-A on this trip.

We'd thought about spending the night in Rocky Mount, North Carolina. I got off the interstate, drove four miles into the town, and immediately spotted a Chick-fil-A. But I did not see a single hotel. We drove around for at least fifteen minutes and did not spot one.

I stopped to get gas and went inside to inquire about lodging. "If you came down this road," the clerk said, gesturing at the highway on which he had just traveled, "you should have passed a whole bunch of places."

A man who overheard me approached in the parking lot as I was finishing pumping gas. He was just trying to help so I don't want to make too much fun of him... but he talked slower than anyone I had ever met in my life. Sentences that contained four words were taking him 30 seconds to say. He announced that he had lived in the town for 40 years and knew exactly where we should go.

"You want to go back up this road here to the Home Depot on the corner, son," he said.

We had passed a Lowe's about two hundred yards away. "Do you mean Lowe's," I asked?

"Yes, yes," he said again. "Highway 64." (He'd been in the town 40 years; I'd been there twenty minutes and I already knew it better.) He was getting excited now and his words increased to a breakneck pace of perhaps twenty per minute. "Once you take the highway a couple of miles you'll find tons of places to stay and lots of great restaurants. There's even a Cracker Barrel!"

He uttered that last phrase with such exuberance you would have thought he was announcing the recent opening of a French Laundry in Rocky Mount. I thanked him and we drove out to that off-ramp expecting little. There was indeed a Cracker Barrel as well as an Outback Steakhouse (not a fan) and a Texas Steakhouse (which appeared from their website to be a clone of Outback but with a Texan theme rather than Australian).

"Let's just get back on the interstate," I suggested to Elizabeth.

We drove another 40 miles, close to the Virginia border, and pulled off the highway to stay in a motel. Just down the road, no more than a quarter-mile, was a Chick-fil-A. We dropped our stuff in the room and went to get dinner. 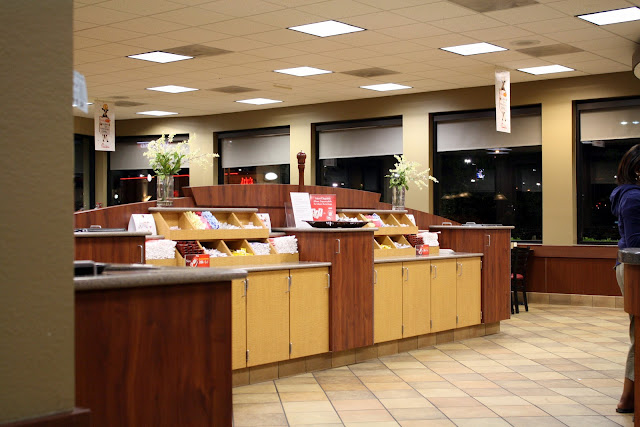 It was immaculate inside. I have never seen a cleaner fast food restaurant. When I was in high school a Burger King opened a couple miles from my parents' house and I went there for dinner the first night it was open; it wasn't as clean as this Chick-fil-A. 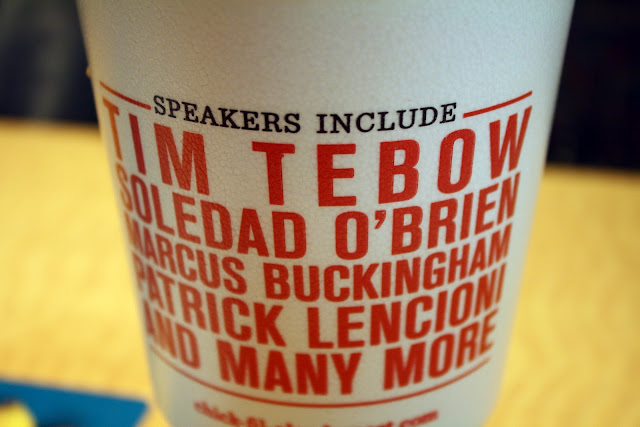 How did I know Tim Tebow's name would be displayed somewhere in the restaurant? Turns out it was on one of the cups. 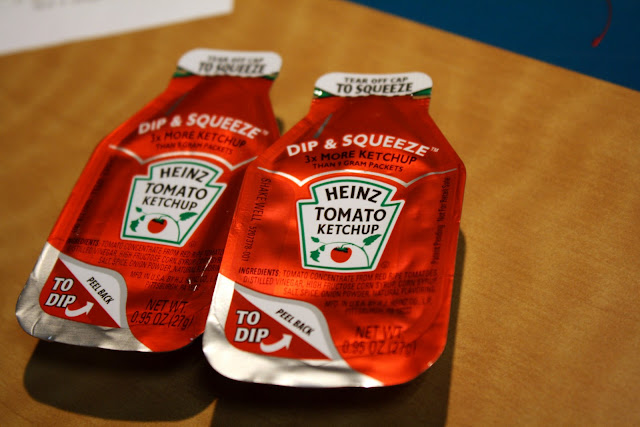 I bought a package of Heinz's "Dip & Squeeze" ketchup containers a few months ago when they were on sale for 99 cents at Target. And I really liked them... but not enough to buy any more once the price went back to its original two dollars. I mean, it's just ketchup; I don't usually eat Heinz so I don't care how it's served. But Chick-fil-A had a big container full of the Dip & Squeeze packets available for the taking. I used two. And slipped another one into my Jack Sack. 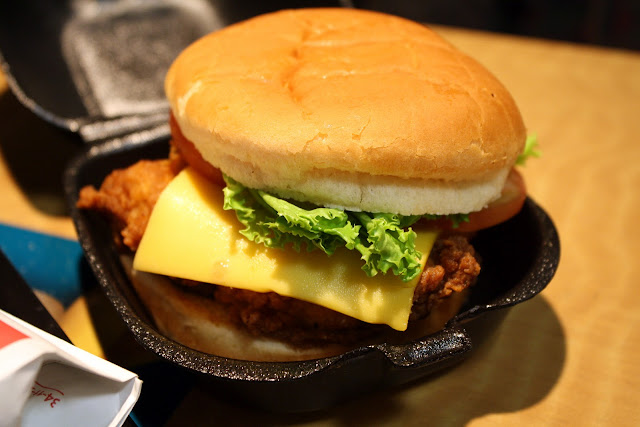 Elizabeth had eaten Chick-fil-A before - though she had never been to one - and liked it. She ordered the Spicy Chicken Deluxe Sandwich, with American cheese, and she loved it. She was even considering getting a second sandwich - something that, in all of the years of eating fast food together, I have never once seen her do. In the end she decided not to. 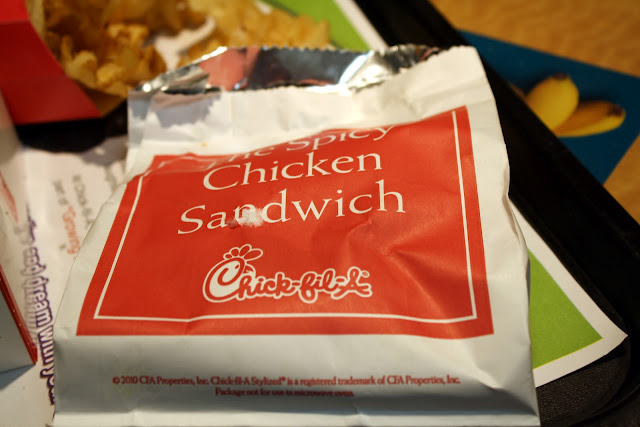 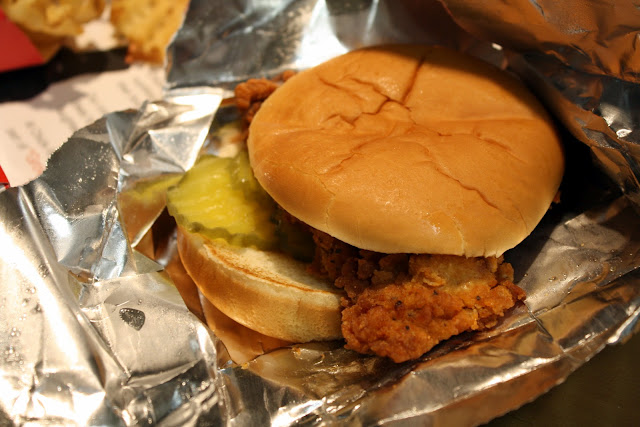 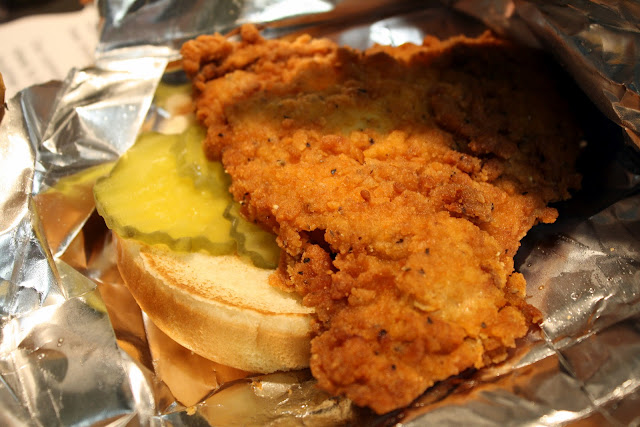 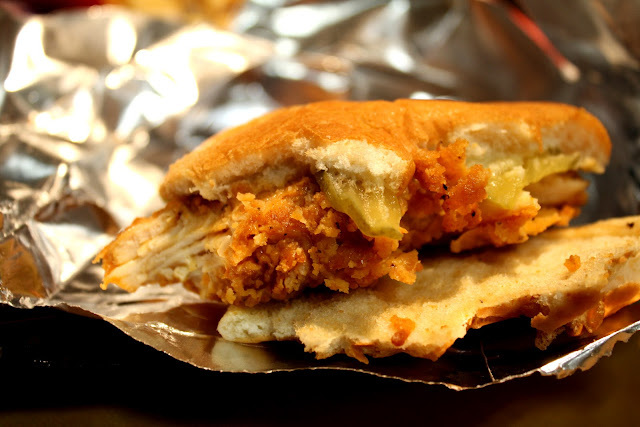 I had the regular Spicy Chicken Sandwich (take Elizabeth's sandwich and remove the cheese, tomatoes and lettuce and subtract 60 cents). I loved it as well. It was every bit as good as the Church's spicy chicken sandwich, which is easily the best fast food chicken sandwich I have ever had. (I'd have to eat more than one of Chick-fil-A's before I'm ready to proclaim it superior to Church's.) The chicken was tender, juicy and spicy, the bread was soft and buttery and the pickles were great. This is far, far ahead of anything the McDonald's-Burger Kings-Wendy's of the world serve. 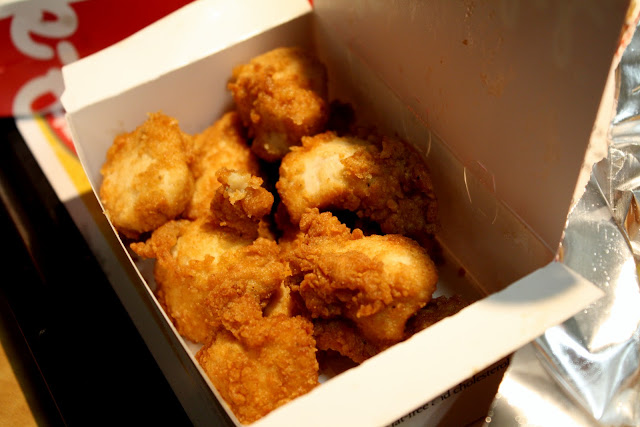 I also ordered us a dozen chicken nuggets. I mean, we were really hungry after driving another forty minutes after the Rocky Mount debacle and it was my first time at Chick-fil-A. I figured it was far better to order too much food as opposed to too little. Plus... 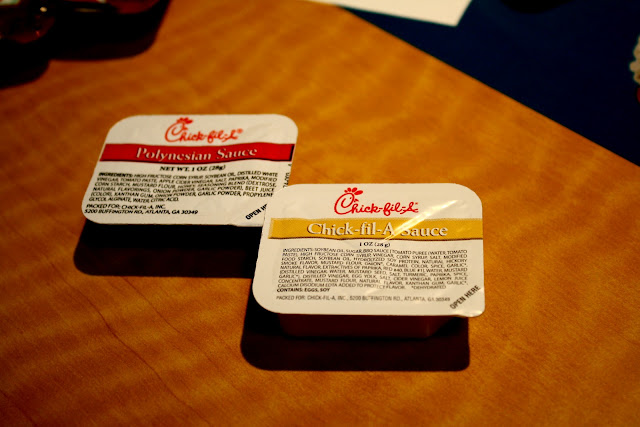 ... I had heard good things about Chick-fil-A's sauces and wanted a vehicle to try them.

"The Chick-fil-A sauce and... well... I like the Polynesian," she replied. 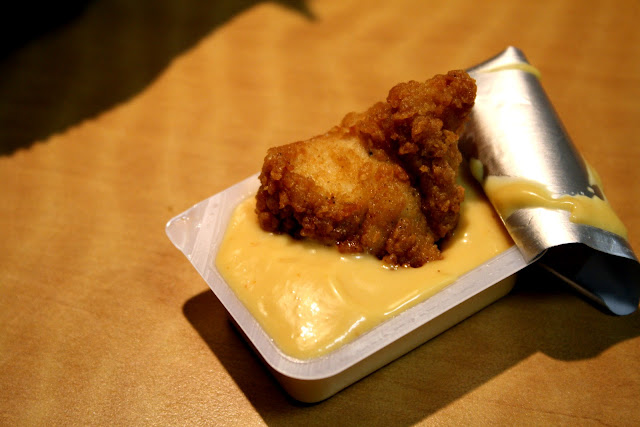 The eponymous sauce was like a cross between a honey-mustard and a fry sauce. Not bad, but a little too sweet for me. A dash of hot sauce mixed in would have helped matters. 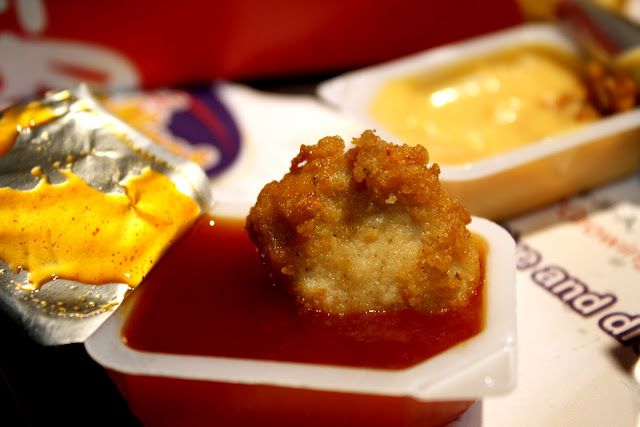 The Polynesian sauce fared a little better, but also was sweeter than ideal. I feel like maybe someone with more Chick-fil-A experience than I - in other words, someone who has been there twice - might have a formula for mixing sauces that would prove awesome. Like mixing their buffalo sauce with the Chick-fil-A sauce or something like that. 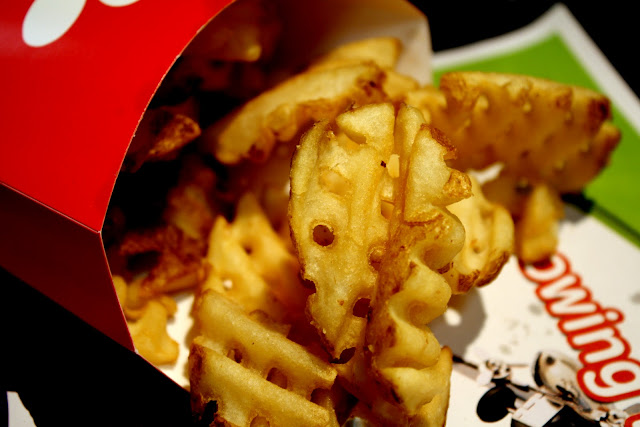 When writing about Zaxby's the other day, I mentioned that crinkle-cut fries are my favorite kind, as long as they're done properly (which they were not). My second-favorite kind of fries are waffle fries, which Chick-fil-A serves. And these were perfect: skins on, crispy on the outside, incredibly light on the inside.

Somewhere in the back of my mind I thought maybe I had gone to Chick-fil-A before. I remember a trip from New Orleans to Knoxville a dozen years ago, and I remember being at a gas station and looking at the Chick-fil-A sign right across the street. I thought I had eaten there. But now I'm pretty sure I did not. Because this meal was really good; I think I would have remembered.

There is no Chick-fil-A in New York City - unless you count a "Chick-fil-A Express" at NYU, which I don't - so I don't know when I will get to have any again, but I would love to give it another try.
Posted by JustinM at 10:00 AM

My university had a mini location in the student union, and I thought the food quality was pretty on par with the other locations I've been to.

I usually order the Spicy Chicken Deluxe (with pepperjack! mmm) but don't really care for their tomatoes, usually taking them off as I eat the sandwich. Last time I went, I asked for no tomato right off the bat, which actually lowered the price of the sandwich by 20-30 cents. Most places don't do that, which I thought was pretty classy.

The nearest Chick-fil-A by me is CRAZY busy during lunch. Drive-through wrapped around the parking lot. They usually have two people outside, walking from car to car taking orders and relaying them to the workers inside, and a separate person set up past the drive-through with a little stand to give out sauces. The other day, I even saw a poor employee in a dress shirt and tie running peoples' money and credit cards to the window to try to make the process go that much faster.

I love Chick-fil-A... There are not any around here but they are usually always beautifully clean. I think that is also one of the main reasons i love it.

Ali: Did the CFA at your school cook the food to order or did they cook it all ahead of time? I've heard NYU's does the latter.

Melissa: Well, the cleanliness was nice but I liked the taste of the food more.

Rainbow Bright: I'm very much aware how religion permeate the company. If you choose not to eat there because of that, I respect that.

Its bittersweet as you get closer to NYC because I know these road trip posts are going to end.

chick fil a does breakfast too. i get the chicken egg n cheese bagel sandwich. its dee-lish. made with a good quality bagel too.

their biscuits are good too but very rich.

agree about their waffle fries.

Our campus Chick-fil-A seemed to cook in very small batches. There were little chutes for all of the products, but I remember often having to wait for whatever I wanted to come out of the fryer as there were none available at the time. I don't remember ever getting something that tasted like it had sat there for a long time, but I'm sure it happened to others.

Never been to chick-fil-a but we did get the sandwiches at high school, although I am not sure how it compares to the real deal because I used to eat the taco bell stuff and didn't taste anything like the real taco bell. now you really got me thinking about sizing up a spicy chicken sandwich. i will have to scout some out for when we move back to So Cal. I think there is one in the lbc. Too bad the sauces were too sweet, but you gave it a good try!

"He uttered that last phrase with such exuberance you would have thought he was announcing the recent opening of a French Laundry in Rocky Mount" lol.

My fast food experience isn't as extensive as yours, but I do think Chik-fil-a might be the best fast food chicken around, and maybe best fast in general.

Banana: Woah... how do you make Taco Bell taste different than it is? Weird. That seems like the kind of thing you could leave out for a week and it would taste the same.

Rodzilla: That wouldn't surprise me one bit. I feel like if I had grown up eating it, I would like it just as much as, say, Del Taco. (Probably not as much as In-N-Out though.)

I'm a bit surprised you hadn't been to CFA -- aren't there a lot in the LA area? (Maybe Pasadena folks don't venture into the big city :) )

Other than the whole 'agenda' thing, my only complaint/wish for CFA was that they offered more sides such as baked beans, mac-n-cheese, corn on the cob, etc. Heck, Church's even offers fried okra, which is surprisingly popular.

That's certainly correct for me, Mike. As much as I like Pasadena, I strongly dislike Los Angeles. I did stop by the CFA in Rancho Cucamonga once with the intention of eating there but there was a line of perhaps 40 people and I left.

Honey roasted BBQ sauce is the best. It is different than there regular BBQ sauce and is not served in cups but in packets. It is not even really a BBQ sauce, it is more like the cfa sauce but with more seasoning.

I definitely wanted another sandwich and more fries! So good.