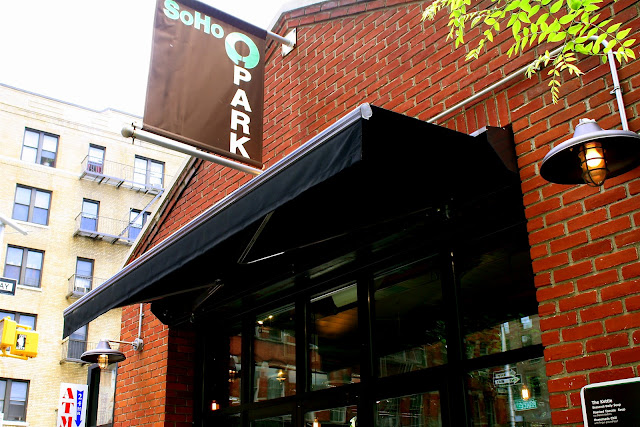 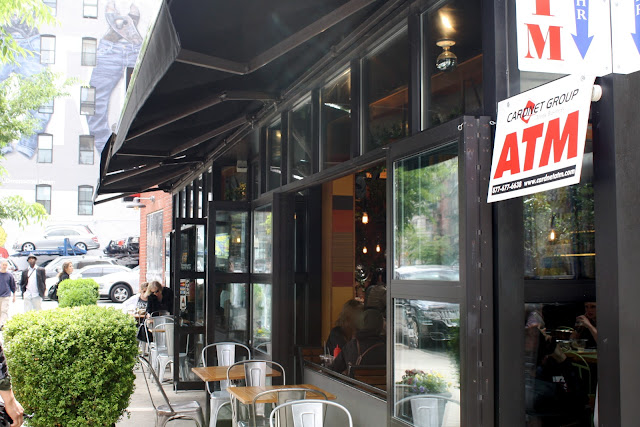 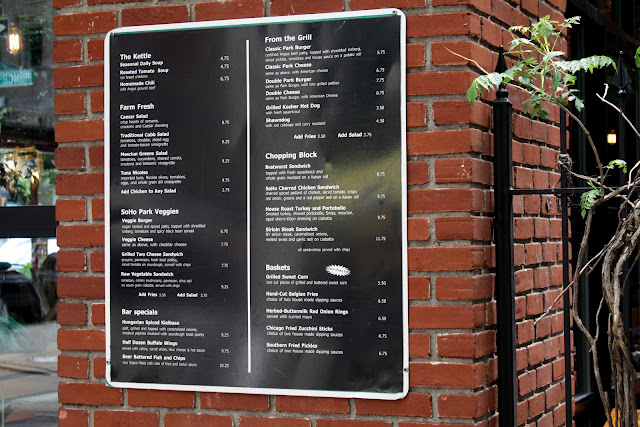 Elizabeth sent me a text the other day, asking if I'd eaten lunch. When I replied no she asked if I would like to come into Manhattan and meet her for food. I said sure. It was a nice sunny day when I got to the subway station in Brooklyn. 20 minutes and three miles later I exited the station in SoHo. It was dark and raining. I walked the three blocks to Elizabeth's office and in those three minutes the sun had reappeared and it was gorgeous out.

This place really f**ks with your head sometimes.

There was a restaurant she suggested and we started walking towards it, but when we passed SoHo Park - with an almost completely-empty patio and a menu featuring Belgian fries and burgers - I said "Can we just go here?" 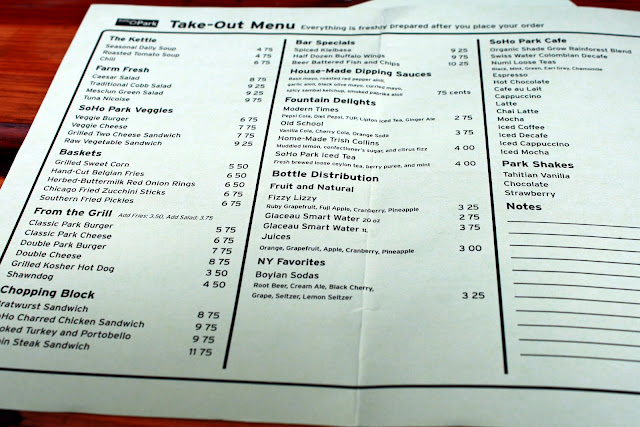 There is a menu over the registers inside, but it was busy and people kept getting in the way of the photo I was trying to take, so I grabbed a paper to-go menu and snapped a picture of it. 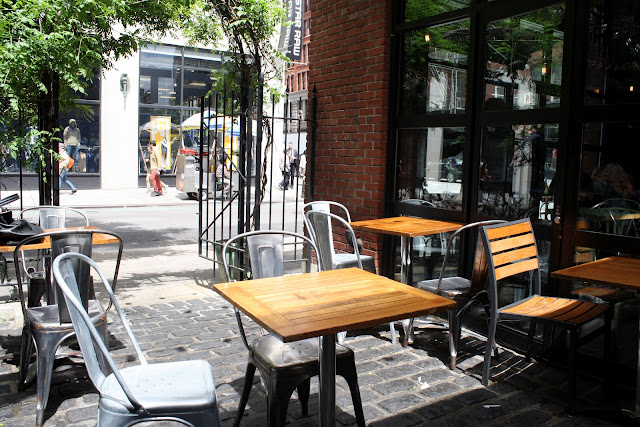 I imagine if it hadn't been raining ten minutes earlier, this patio would have been much more crowded (as it was by the time we finished our meal). 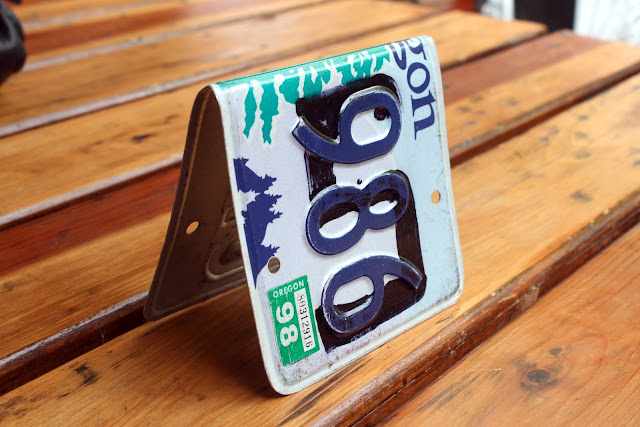 After we placed our order, the girl behind the register handed us a bent license plate. Is this more attractive than a tabletop number? Sure. Is it really a better system? I don't know, but I kind of doubt it. 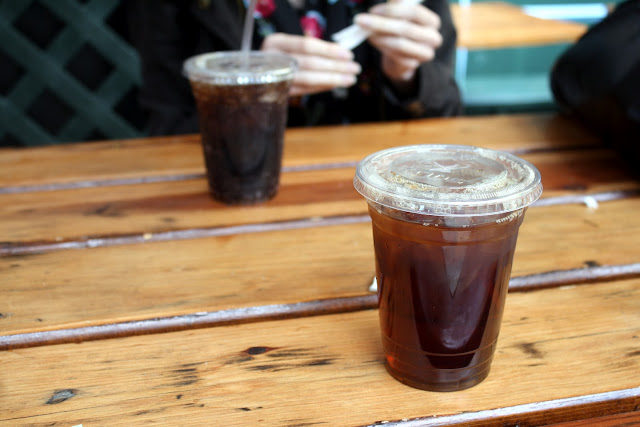 I had myself an iced coffee and Elizabeth a Pepsi. 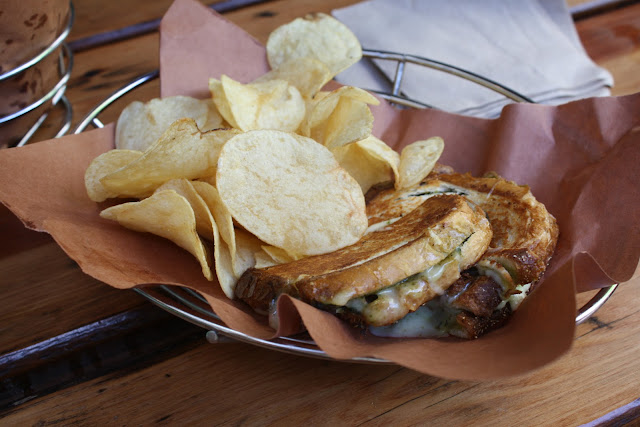 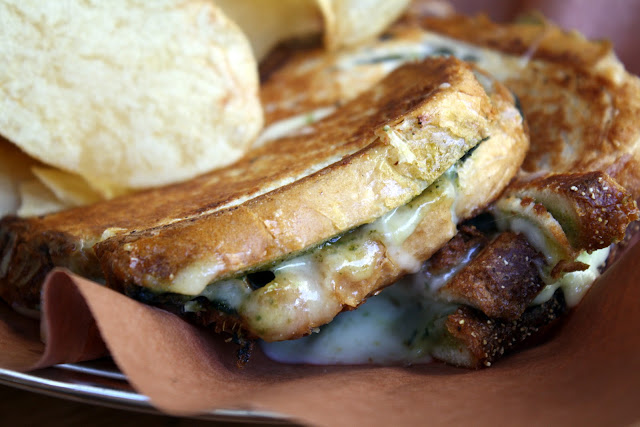 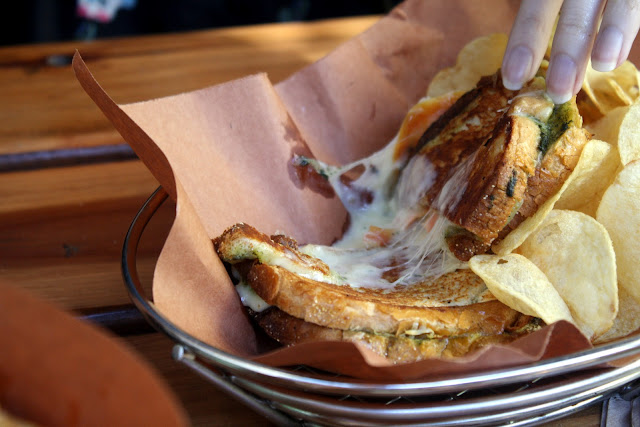 It only took a few minutes for our food to arrive. I don't know why I expected a longer wait, but I did. Elizabeth's grilled cheese was yummy: plenty of gooey cheese and crisp bread. They went pretty heavy with the basil, which I love but I could see some people finding too aggressive. 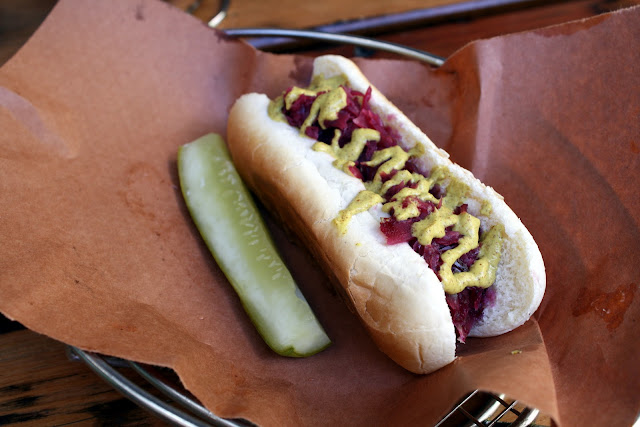 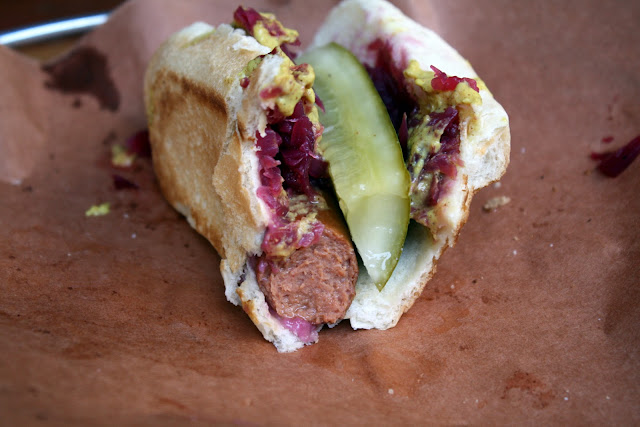 I went with the Shawndog: a hot dog with red cabbage slaw and brown mustard. I really enjoyed it. The wiener was tiny, I was hoping for something like one of my beloved quarter-pounders from Dog Haus, but overall the flavors were great. I took a bite of the pickle and thought it was so good I stuck it in the dog. 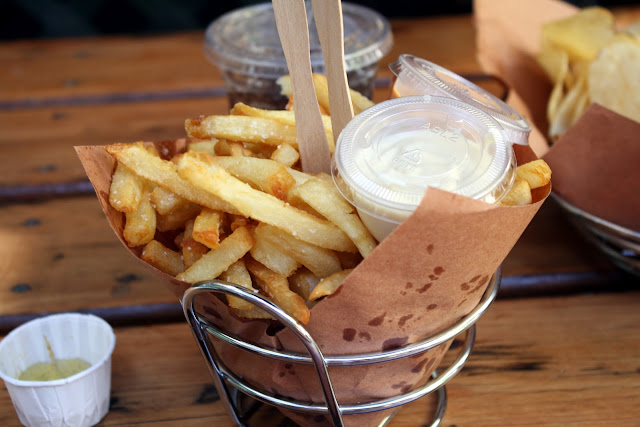 While we liked the sandwiches, we loved the fries. They were crisp on the outside and airy on the inside and, unlike a lot of (maybe even most) places serving Belgian fries, they were not covered in an avalanche of salt. There was the perfect amount. The order was large and we couldn't finish it. 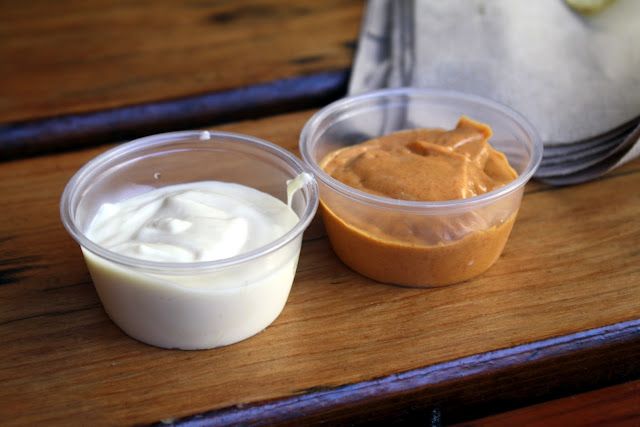 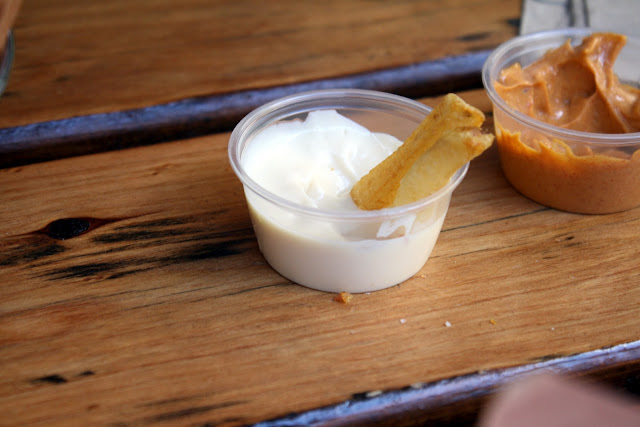 I'm not in any big hurry to get back to SoHo Park - there are lots of restaurants near Elizabeth's office at which I would like to eat - but I would certainly go back again, especially if I can sit on that patio and eat those fries.
Posted by JustinM at 9:30 AM

It has the ambiance of Dog Haus, so no wonder you like it. The fries look yummy.

Everything looks delicious and I am with you on the heavy basil grilled cheese. Like the OR table number. Sounds like NYC may have similar PDX pms symptoms. Go figure!

The fries were great!! And the grilled cheese was very good. I liked it was crispy and not soggy.

The basil-grilled-cheese and cabbage-mustard-pickle-dog both look delicious. I like the cobbled patio. Cool place.