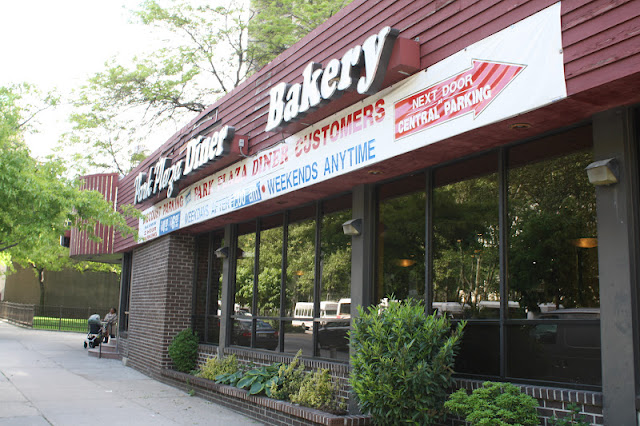 This is a tale of two different meals. Not long after we arrived in Brooklyn, Elizabeth's dad and her great-uncle were telling us about a meal they had from a diner called Park Plaza: penne pasta in vodka sauce with shrimp. I was dubious, but they assured us it was good and invited us to come over and try it one night soon. So we did. 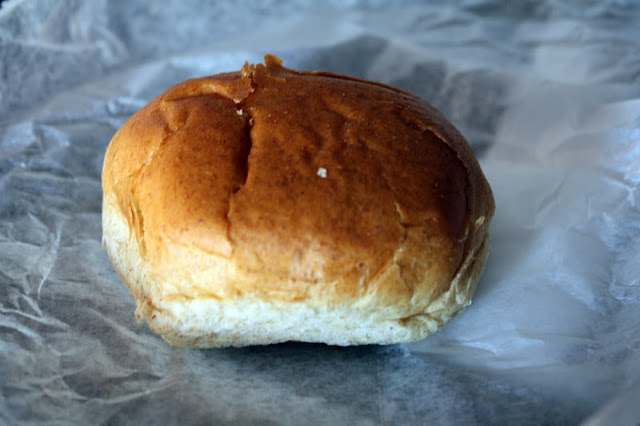 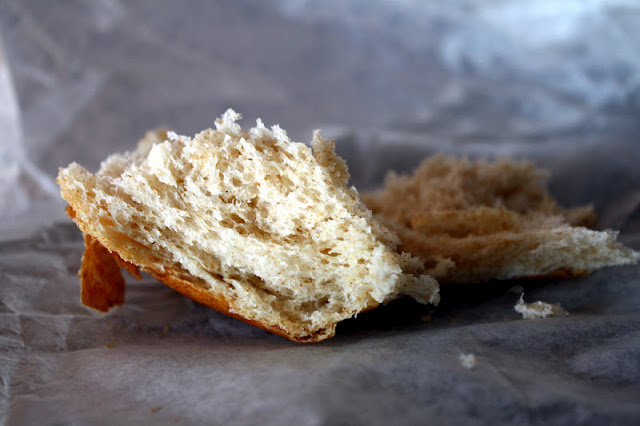 The roll was good but they only gave us one little one. 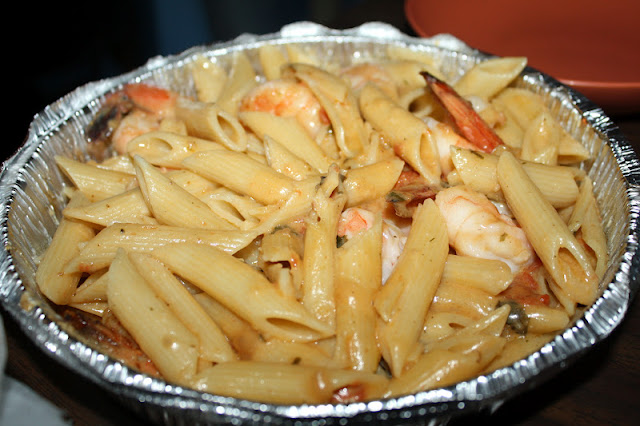 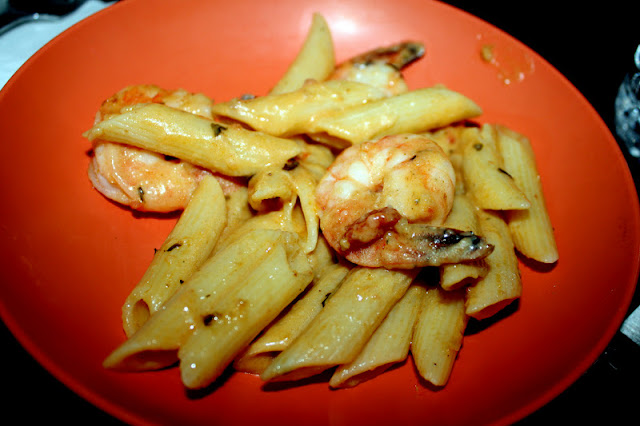 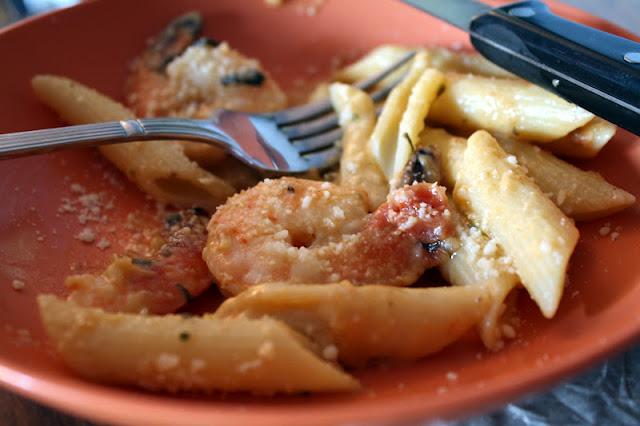 I have to admit, the pasta was quite good, much better than I ever would have expected. I am not a particularly big fan of pasta, but this impressed me. The shrimp were a good size and well cooked, and the vodka sauce was one of the better ones I have ever had. (Take that with a grain of salt, as it is a very small sample size.)

I didn't love the meal by any means - in truth I prefer our weekly jaunts to My Little Pizzeria tenfold over this meal - but it was a good dinner. As it turns out, Park Plaza is open until 1:30 AM during the week and 24 hours on the weekend, so the other day when my brother got into town at 11 PM and was in need of dinner, I took him to Park Plaza. (There is another place one block away from us that is open 24 hours, but I have heard a not-small number of anecdotes about food poisoning caused by the place.) 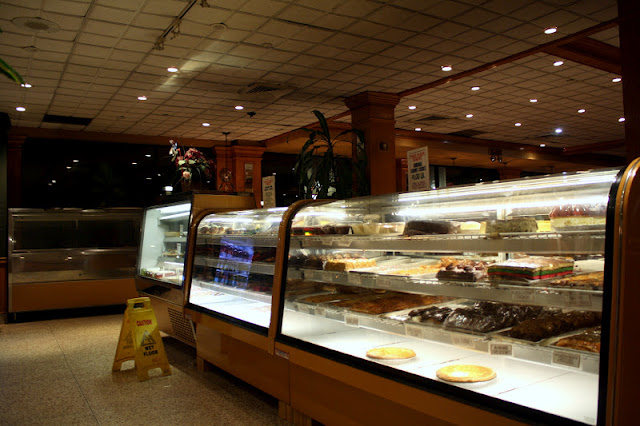 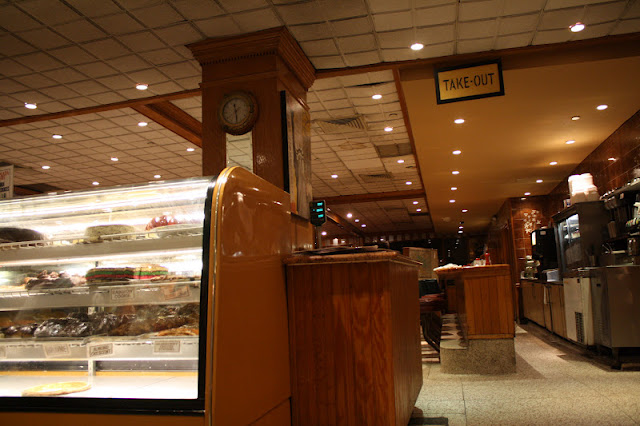 It was close to midnight and almost empty. We both looked over the huge menu for a few minutes before making our decisions. 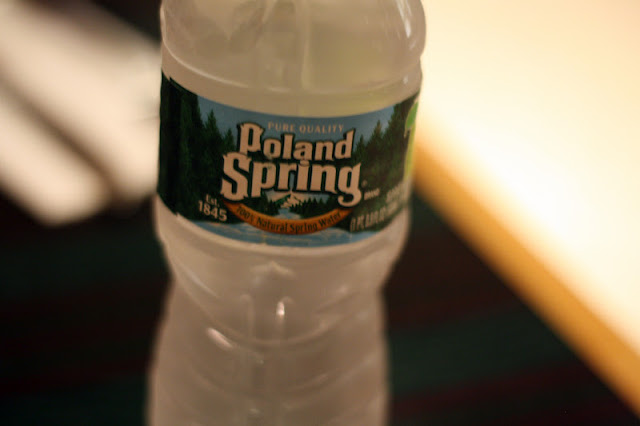 Normally I have no problem with tap water, but I saw a fridge full of bottle water that looked ice cold and I wanted one. 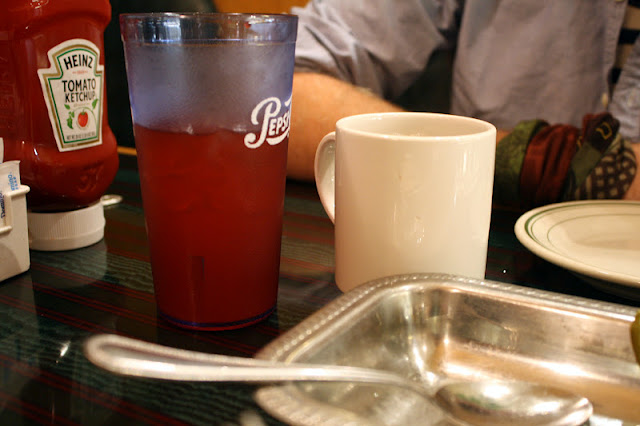 My brother requested a coffee and a fruit punch.

"Together?" the waiter inquired.

"Yes," my brother said, before considering the question further: "Well, not in the same glass, if that's what you're asking." 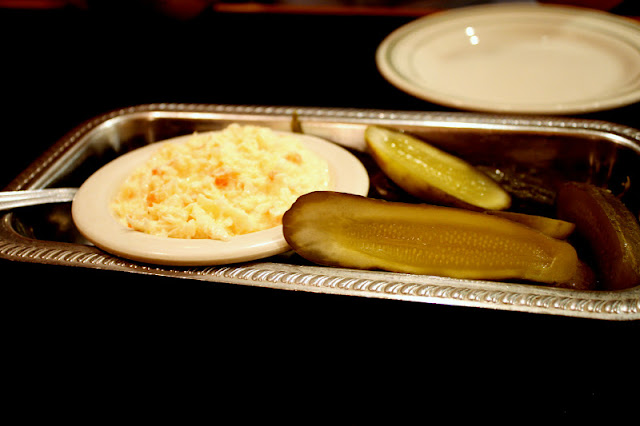 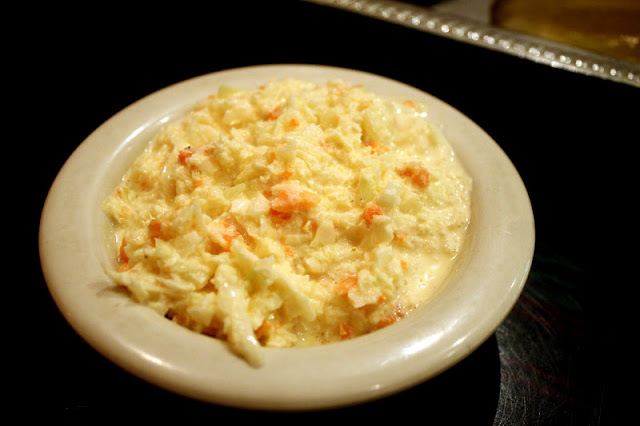 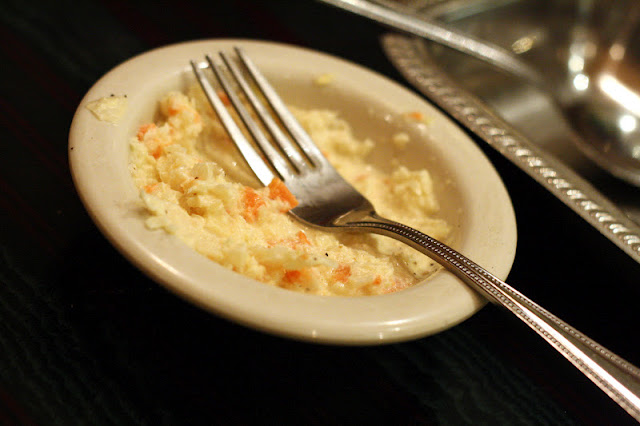 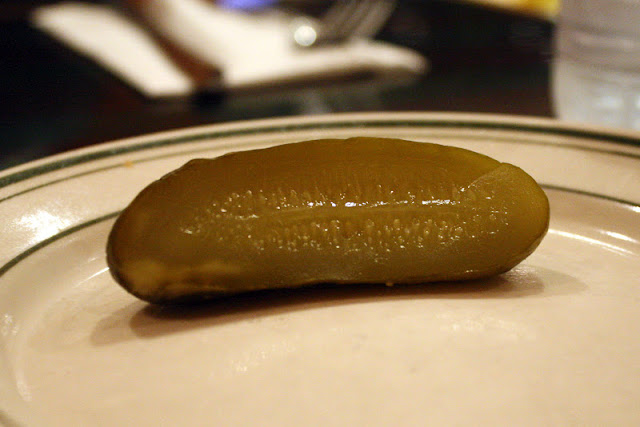 A container of slaw and pickles was placed in front of us. The slaw was that same runny, straight-out-of-a-gallon-container stuff that diners all across the country use. Fortunately I like that stuff. The pickle was just okay. 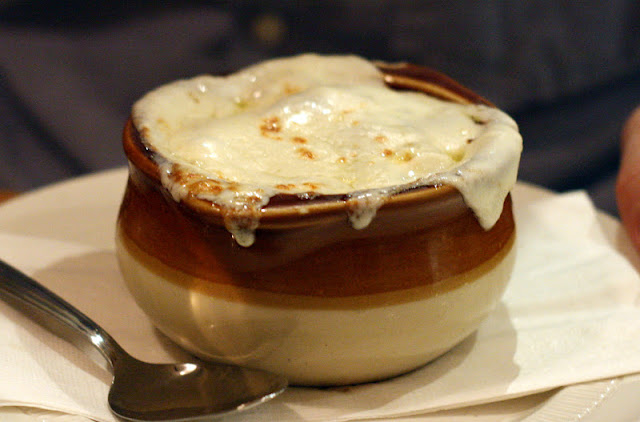 My brother started with a crock of French Onion soup, which he said was fine. 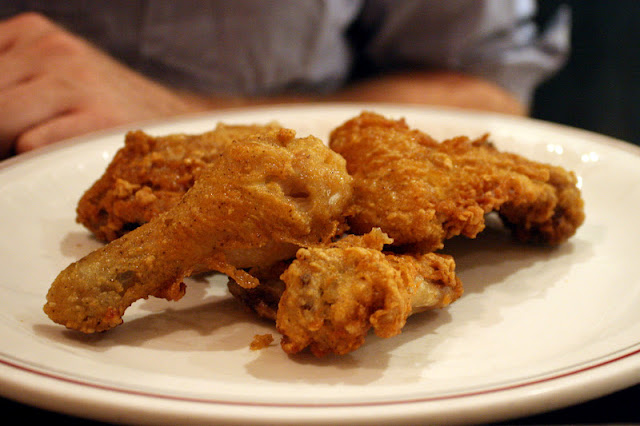 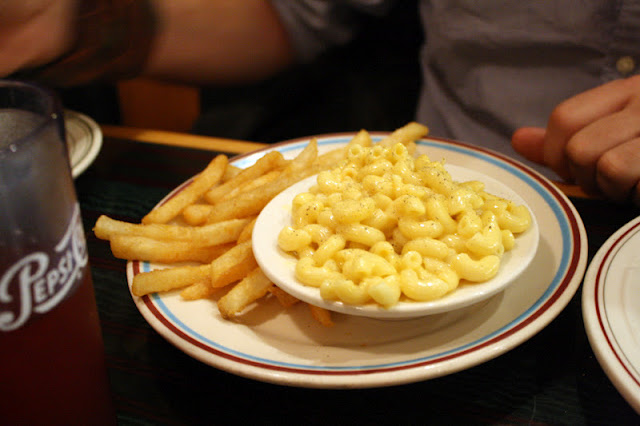 My brother had the fried chicken, with the carbohydrate-intensive sides of fries and mac & cheese. ("All I've eaten today is a cookie and a few Pringles," he explained.) He started chowing down on the chicken, which I thought looked terrible. I told him so.

"Yeah, it's not very good, but I'm really hungry." 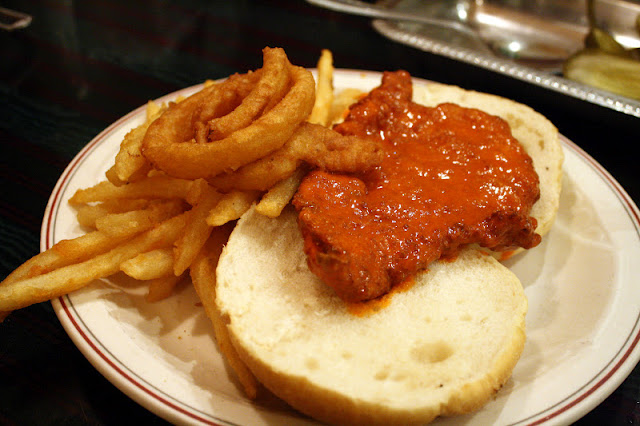 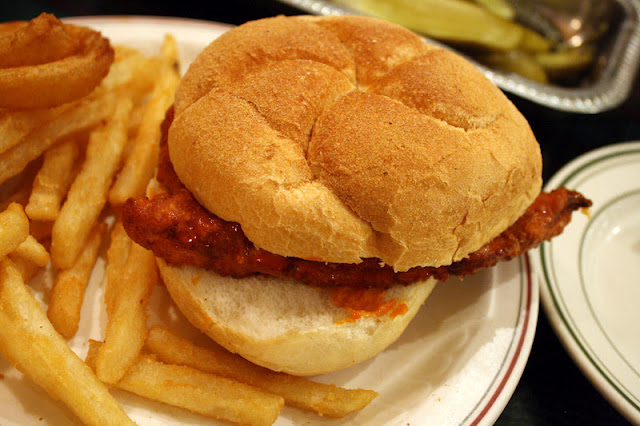 I had the buffalo chicken sandwich. It arrived on a bun with nothing else: not the advertised lettuce and tomato nor the blue cheese I had requested (after being prompted to by the menu). At first I thought about saying something but then I realized I didn't really care.

The bun was soft and fresh. The chicken breast was large and covered in sauce. It wasn't really good, but it wasn't bad. (The fries were terrible, but at this point in my life I enjoy the fries at perhaps 1/10th of the restaurants I visit.)


I am willing to return to Park Plaza if I need food after midnight, and I would be willing to eat that shrimp pasta again (but only if someone else wants to) but other than that I don't think I'll be back. It's just a regular diner, and there are plenty of those around.
Posted by JustinM at 10:00 AM

"A container of slaw and pickles was placed in front of us."

That seems....really odd. Especially that they were in a foil pan. ?? Honestly, at that photo I decided that this place was probably not that great.

That may be the strangest reason ever that I have prejudged a restaurant.

("Aluminum" pan, I intended to type.)

(Never-mind, it wasn't aluminum. But still weird as a serving platter in a restaurant. My prejudice stands.)

As soon as I read the first line of your comment, the quote, I thought you were going to admonish me for using passive voice.

Anyway, that's really not a strange reason for prejudging a restaurant. That was kind of weird.

I once was out for a walk with my friend Min. We passed by the shopping center in South Pasadena where Golden China is. All we could see from our angle was the yellow sign reading "GOLDEN CHINA." You could not see any of the restaurant, just the sign. I mentioned to Min that that's where Elizabeth and I often get Chinese food.

"That place looks terrible!" she exclaimed.

Now that is a strange reason to form an opinion about a place.

Yeah that kind of weirds me out too. Do you think they throw out the pickles you don't use or just pass them on to someone else?

I would bet the latter.

Now THAT'S how you slam a place.

I love the coffee & fruit punch comment -- I could definately see them bringing your brother a glass of fruit punch with coffee poured into it. Sort of a bizzaro Arnold Palmer, if you will.