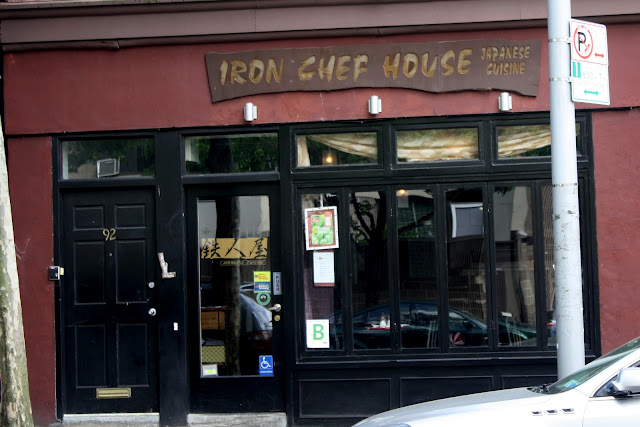 For many years, Elizabeth has told me about Iron Chef House in Brooklyn Heights, how it's her favorite Asian restaurant - perhaps her favorite restaurant overall - in the area. So not long after we'd moved to Brooklyn she asked me to go out on a date with her to Iron Chef House. I don't know anyone else in the city, so it's not like I could come up with a good excuse for being busy. I had to go.

We showed up about 7:30 on a Friday night and the place was packed. There was a table for two available; if we'd been a larger party we would have had to wait. 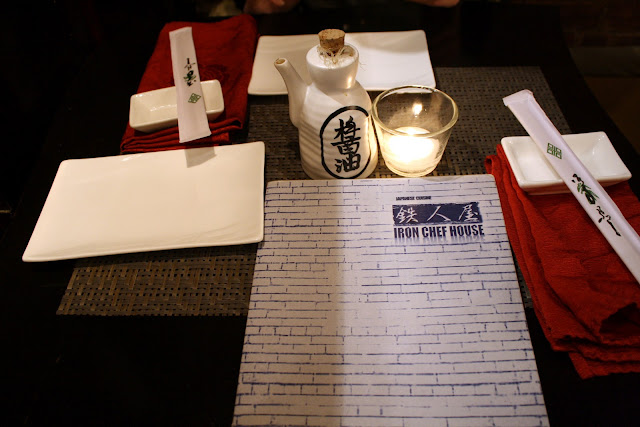 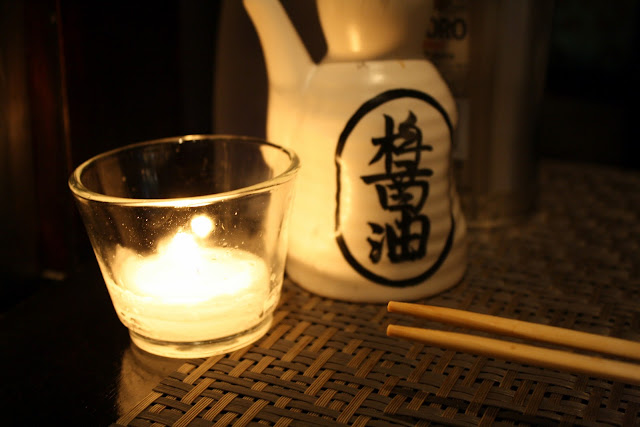 The table was small, but my first impression of the place was positive. The servers were friendly and despite being busy they approached our table after only a short time. 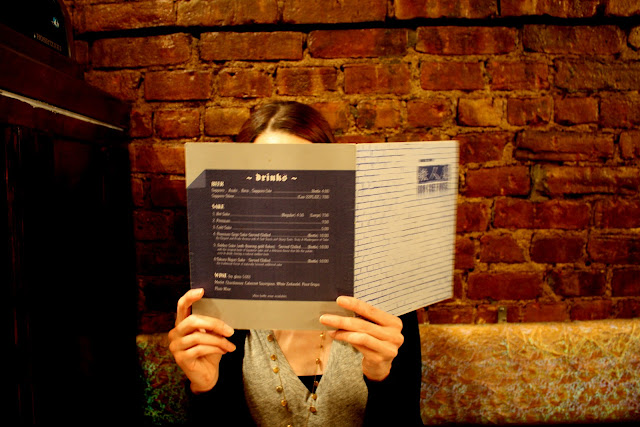 When I wrote about Chang's Garden in March, I mentioned my little two-year-old buddy Lucy and how she likes to hold a menu in front of her face when I try to take her picture, just like Elizabeth does. See what I mean? 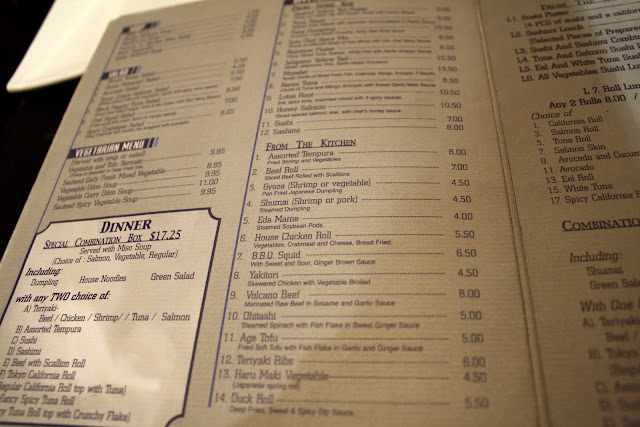 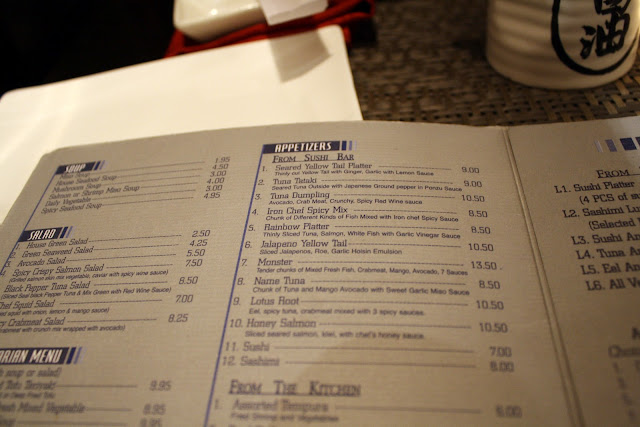 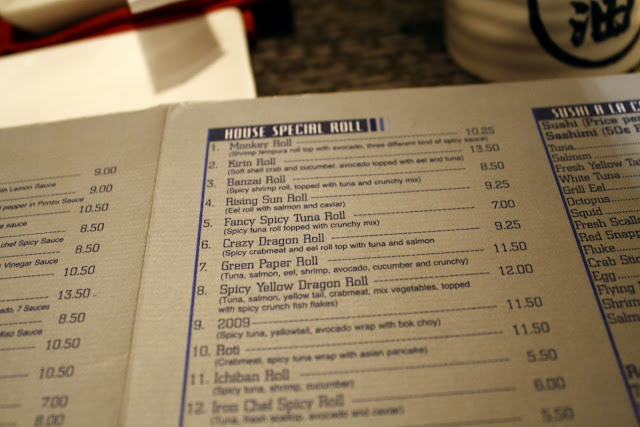 I only had to look at the menu for ten seconds before I realized that Iron Chef House is one of those places where at least ten or twelve items sound absolutely delicious and I would have a hard time whittling down my selections. 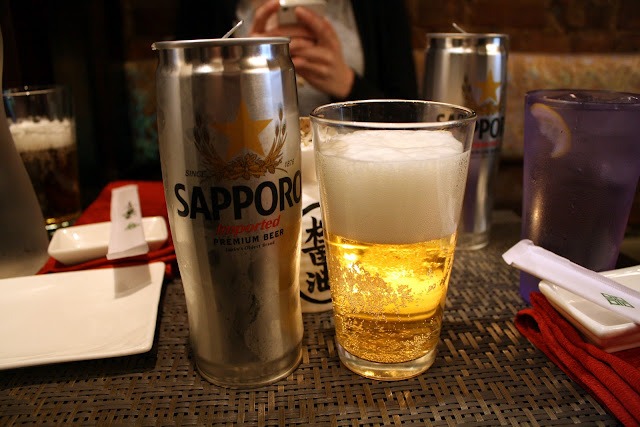 Well, beer isn't too hard to choose. Sapporo is my least favorite of the popular Japanese brands, but Elizabeth ordered one and I figured I'd give it one more try. Plus, they had the large cans, and I was thirsty for a beer. 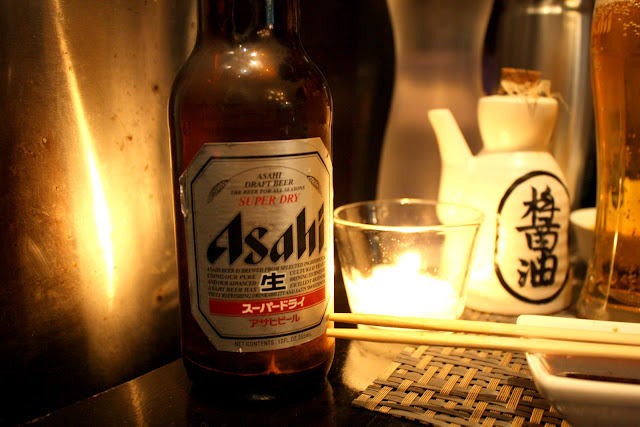 I was again reminded that Sapporo just isn't for me. But I still drank it. Quickly. (Believe it or not, these beers and the two Coronas I had while grilling this past Saturday are the only alcohol I've had in the last six weeks.) And ordered myself an Asahi. 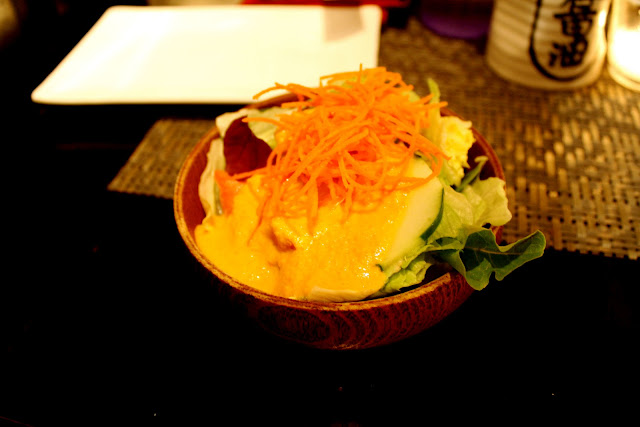 We ordered an entree that included a salad and Elizabeth let me have it. Usually these salads are all the same, and while the main components of this one were no different from scores that I have had in the past at dozens of restaurants around the country, the dressing set it apart. It was stellar, tasting of ginger and I believe carrot. I almost ordered another one, but decided not to. If the salad was this good I wanted to see what was coming next. 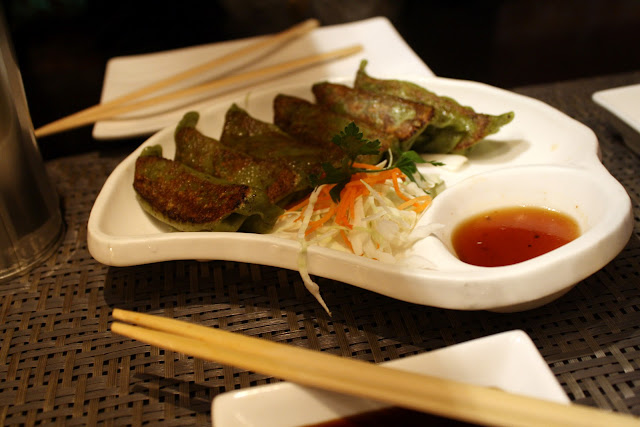 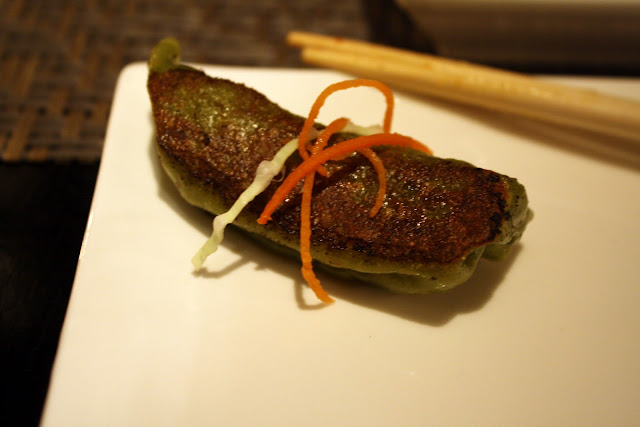 We started with gyoza, opting for the vegetable version. (We were given a choice of veggie or shrimp; being that we had not one but two different shrimp dishes coming up, we went with the vegetables.) We both enjoyed them - they were impossibly light for dumplings that had been pan-fried, the veggies were good and the dipping sauce was delicious. 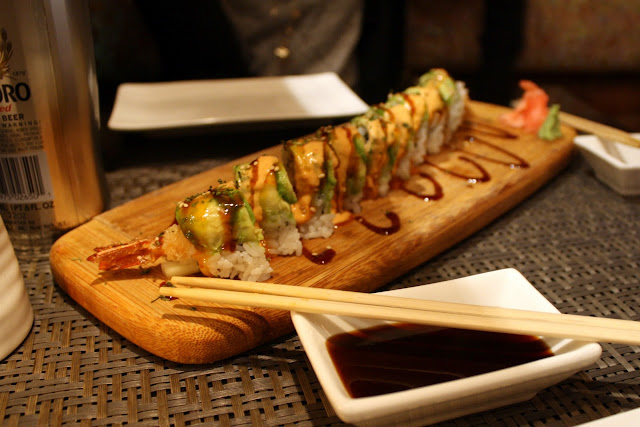 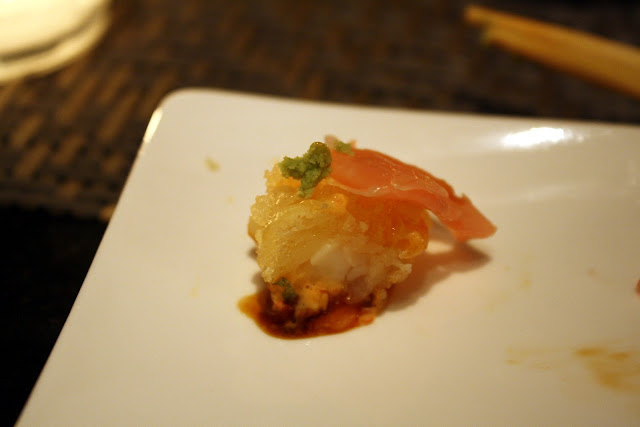 Next up came the Monkey Roll: shrimp tempura topped with avocado and three different kinds of spicy sauce. It proved difficult for me to poke the pieces of avocado out of my sushi - they were huge, fresh pieces, but I really dislike the taste of avocado - but when I was able to, the payoff was spectacular. This was some of the most enjoyable sushi I have ever had. 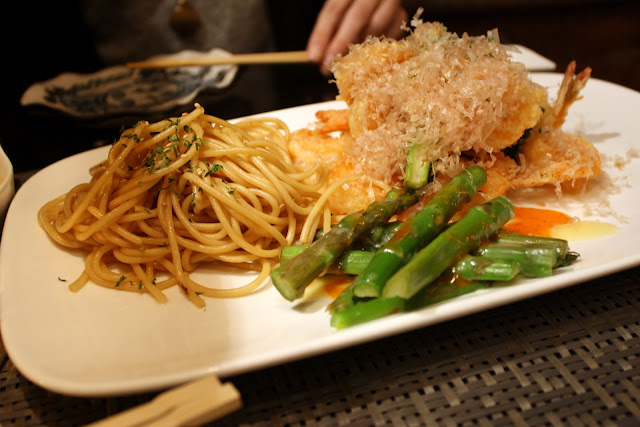 And our entree, the rock shrimp with a sweet mustard and white wine sauce. Thirty seconds after we sat down, they turned the house lights down, making it much more difficult to take photos without a flash. I wish I'd gotten a picture of this dish with the shrimp featured more prominently, because they were outstanding. 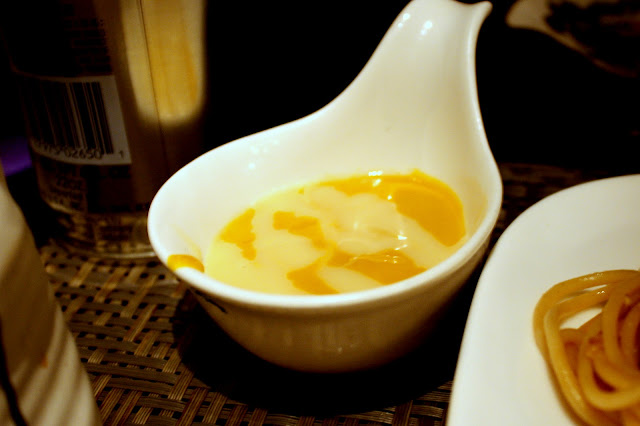 The mustard and white wine sauce drizzled on the plate was delicious, as were the noodles and asparagus, but a container of honey mustard served on the side was just as good: a buttery, slightly-spicy sauce that complemented the crispy, meaty shrimp perfectly. 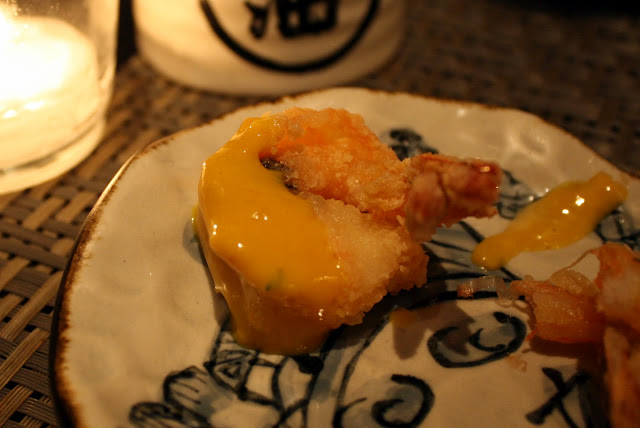 As I mentioned, there are quite a few items on the Iron Chef House menu that look great (in particular a broiled flounder with ginger-scallion and butter sauce and a chicken roll with crabmeat), but it will be hard on subsequent visits not to just order these shrimp again - not to share but rather an entire plate for myself - and devour them. They were that good.
Posted by JustinM at 9:00 AM

You've only had beers twice in six weeks? Crazy.

I concur on the dislike of avocados on sushi. Thought I was the only one, people seem to like avocado on everything. Time and a place.

I've never had gyoza that look like that....kinda off putting. It's so green. And the inner teenager has to agree w/a previous post that they look like turds.

Michelle: Once I told all my friends I was moving, there was a LOT of boozing in the month leading up to my departure. And our road trip was pretty beer-saturated. So I haven't felt any need lately.

Jessica: Me neither. I was not thrilled when they hit the table. Kind of flabby, too. But they were quite tasty. (When I return I will be ordering another appetizer instead, though.)

I adore this place. Every single person who has eaten here with me loves it.