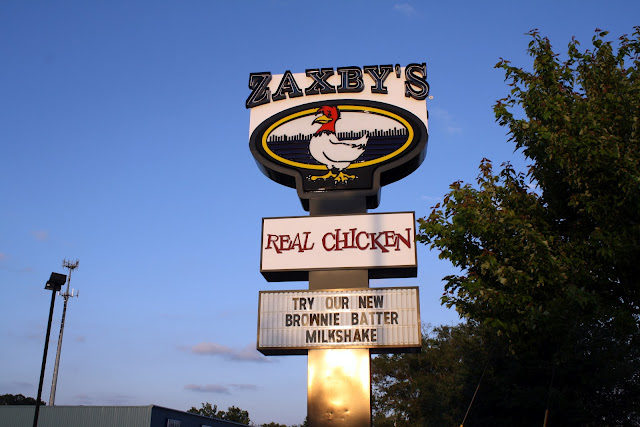 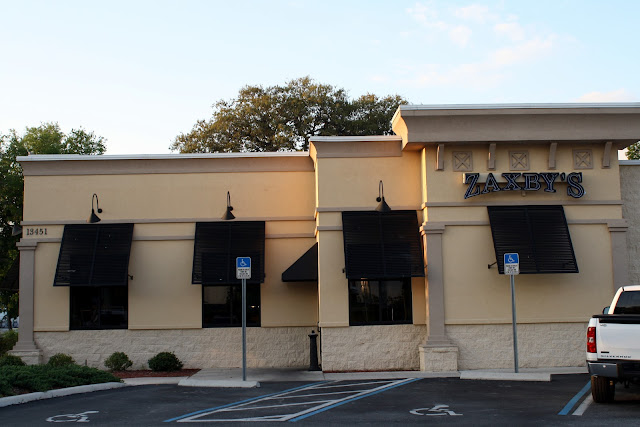 Like Whataburger - or another chain I will be writing about next week - I have heard about Zaxby's for years. Their slogan of "Real Chicken" appealed to me, but pretty much all of the restaurants are in the Southeast part of the country, so it wasn't anything I had plans to eat. Until recently. The drive from New Orleans to Florida skirts right along the Gulf Coast, where there are plenty of Zaxby's locations.

As the sun was setting in the Florida panhandle, I suggested we stop at Zaxby's for dinner. 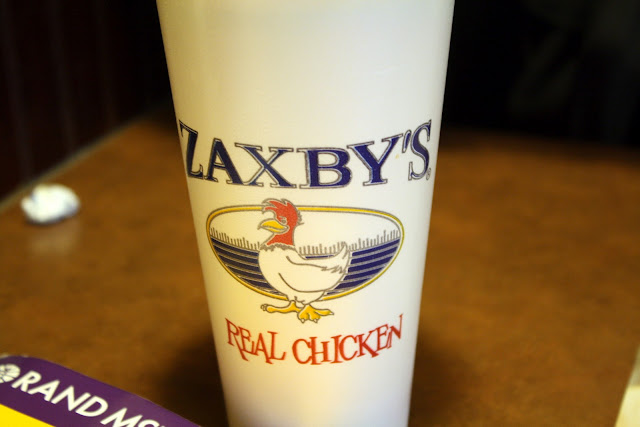 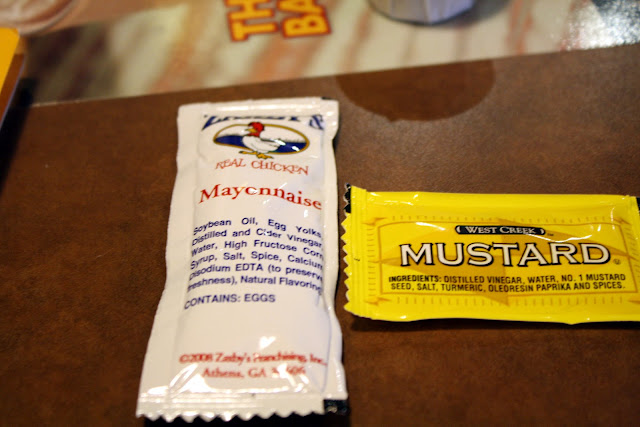 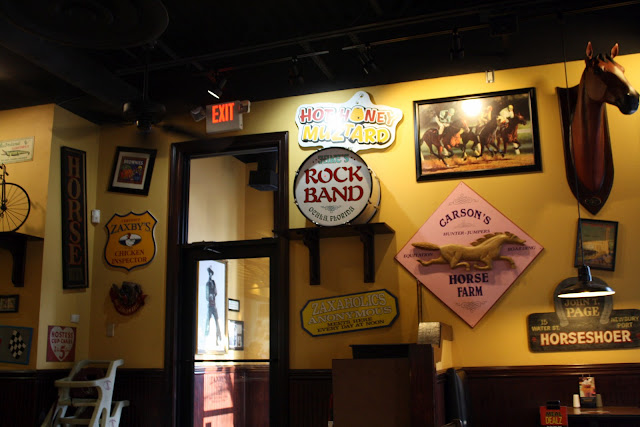 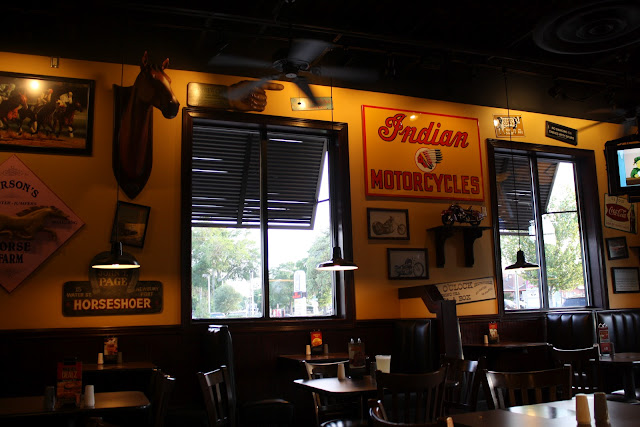 I liked the way it looked inside. It reminded me of the way Bennigan's used to look. The woman behind the counter was extremely friendly and she gave us some recommendations when we told her this was our first time at Zaxby's. 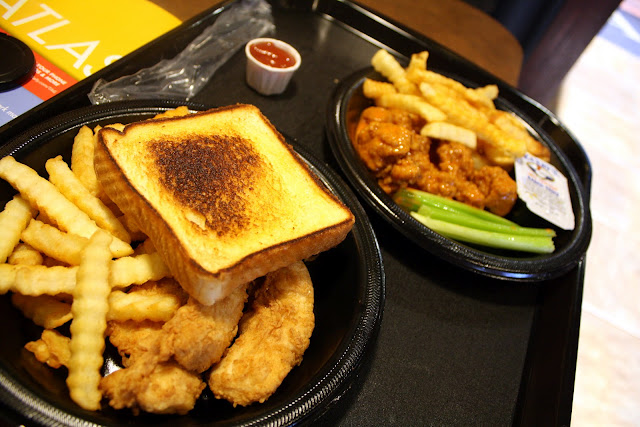 So this is what we ended up with: a chicken fingers plate for me and boneless wings for Elizabeth. As a commenter pointed out in a previous post, Texas Toast seems to come with all fast food options in this part of the country, and this was no exception. 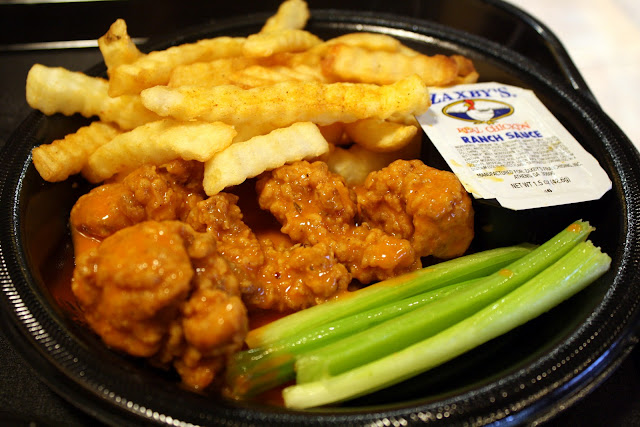 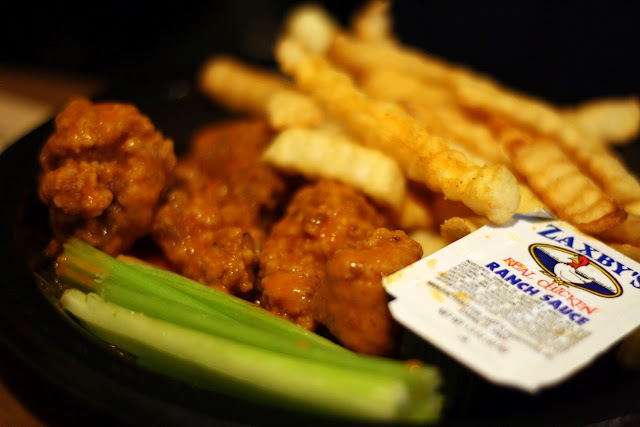 Elizabeth gave me one of her boneless wings, in the "original" flavor that was recommended. I liked it. Certainly not the best I've ever had, but not bad. Judged against restaurants it was just average, but by fast food standards it was pretty good. I would like to try them in a different flavor. And I wish I had gotten them here. 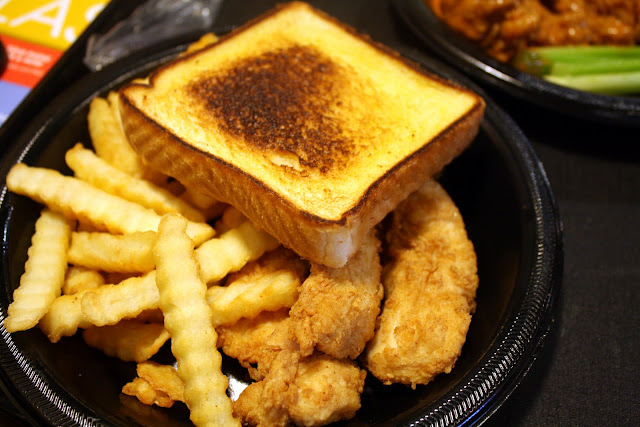 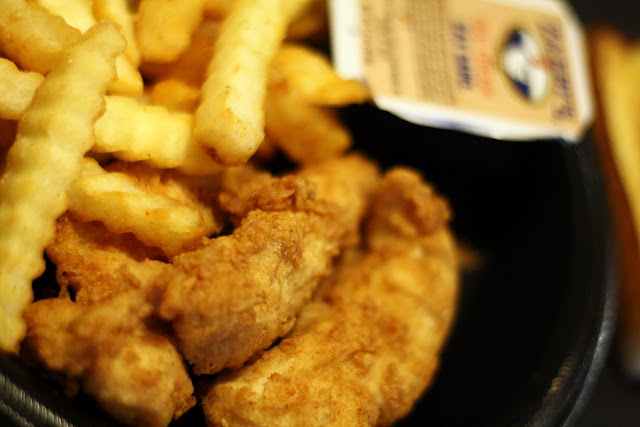 Because I was not a fan of my chicken. Rubbery, with flaky breading, the chicken didn't have any flavor. This may be real chicken, but it's not real good chicken. And certainly not the "indescribably good chicken" that Zaxby's calls itself. 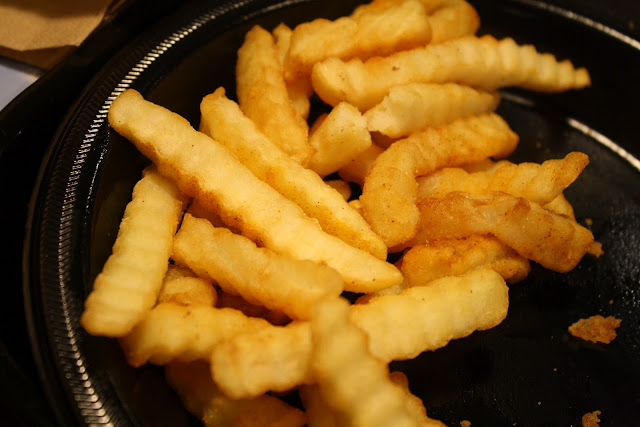 The fries were terrible. Crinkle-cut fries are probably my favorite variety of fries (not counting Belgian, of course) but these were undercooked, flabby, mealy pieces of potato. They were barely higher than room temperature. 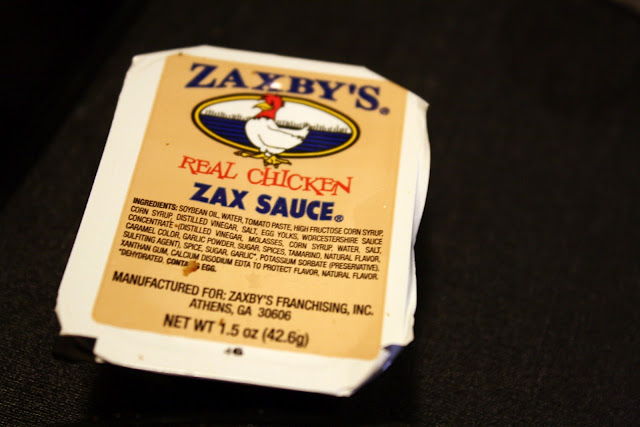 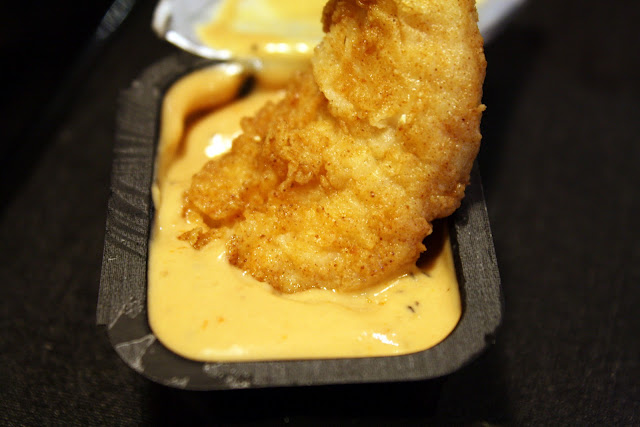 We were also told that we had to try the Zax sauce. There was nothing special about it; as far as I could tell it was just mayonnaise and ketchup, a poor man's attempt at replicating Popeyes Delta Sauce.

I don't live near a Zaxby's - the nearest one is in Virginia - and that's just as well. If there was one nearby I would give them one more try, but the chicken would have to be a lot better than what we received here for me to call myself a fan.
Posted by JustinM at 10:00 AM

But what about the Brownie Batter Milkshake?!

The inside does look cool. The outside, however, reminds me of an Armenian banquet hall.
Those krinkle-cut fries appear to be right off the grocers frozen shelf.

Wow, we are on opposite sides here, Justin. I LOVE their fries. Crispy, soft and fluffy on the inside, a hint of seasoned salt. And I think the chicken is pretty good too. Alright, gotta ask. Did you hit up a Raising Canes?

I don't think we're on opposite sides. My fries were "undercooked, flabby, mealy pieces of potato." You wouldn't like that, would you? If I had received the "crispy, soft and fluffy on the inside" fries that you describe, I would have loved them, too.

Your experience at Zaxby's sounds like my El Pollo Loco experience; they opened one in St. Louis near me (exploring the mid-west market, apparently) and after hearing all sorts of good things about them from folks in the SW, I only got one decent meal out of about 6 tries. The sides were decent, and they tested a 'sirloin steak chili' that was really good, but for the most part the chicken was meh at best. I think it had a lot more to do with kitchen management rather than what the product was supposed to be. They closed after about a year and it's now an IHOP.

I haven't had much luck with anything at El Pollo Loco except their chicken burritos (many of which I really like). Their fish tacos, steak, and "chicken carnitas" weren't very good.