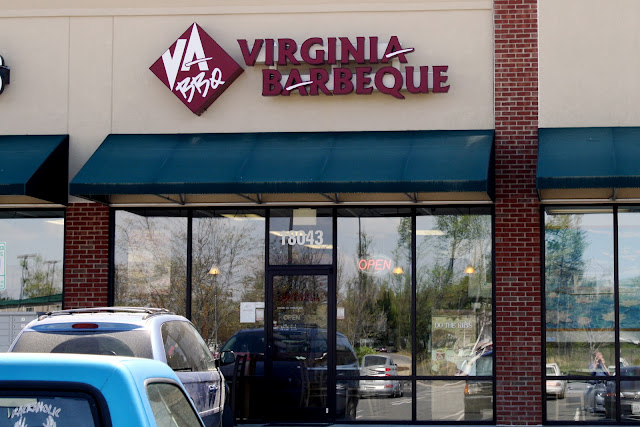 As much fun as we had driving across the country together, we were watching TV at night in North Carolina, after having driven 677 miles from Florida, and we both had the same feeling: let's just go to New York tomorrow. Originally we'd thought about going to some museums in D.C. or catching the Orioles-Yankees game in Baltimore (Camden Yards really is as spectacular as they say) and having one more night on the road. But this was the end of our tenth day on the road, we'd done enough, we were anxious to get to our new home.

So we slept in a little the next morning, took our time getting ready, and got on the road. We were only on the road a short time before I got hungry. We got off in Richmond - I once spent a really fun day in Richmond and had a good dinner at a place called Awful Arthur's - and drove around for twenty minutes but did not spot anything. (We were too far away from the main part of Richmond, and at any rate Awful Arthur's closed their Richmond location many years ago, I later learned.)

Once I saw the menu I remembered why I had heard of it before: they had a location in Temecula that I had read about once but never visited. Virginia BBQ offers two kinds of pulled pork sandwiches and we both ordered the "North Carolina" version with two sides. 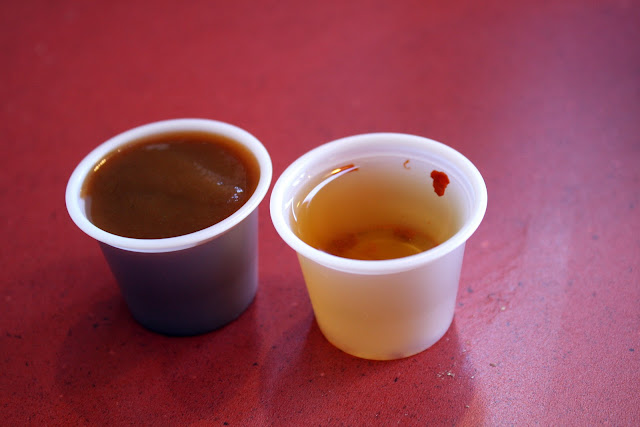 They also offer two kinds of barbecue sauce: "Virginia" and "North Carolina." I don't recall ever hearing about a sauce described as "Virginia-style." North Carolina (both Eastern and Western), South Carolina, Georgia, Texas, Memphis, Kansas City, Alabama White... I'm familiar with all of those. But Virginia? Never heard of it. And I wasn't much of fan. It tasted like a blend of molasses and vinegar and left a sticky film on the roof of my mouth.

Their North Carolina sauce, on the other hand, was fantastic: vinegar and chili flakes. Pretty simple, but that's all a properly-smoked pork butt needs. I considered buying a bottle of this sauce but then remembered how easy it is to make myself. 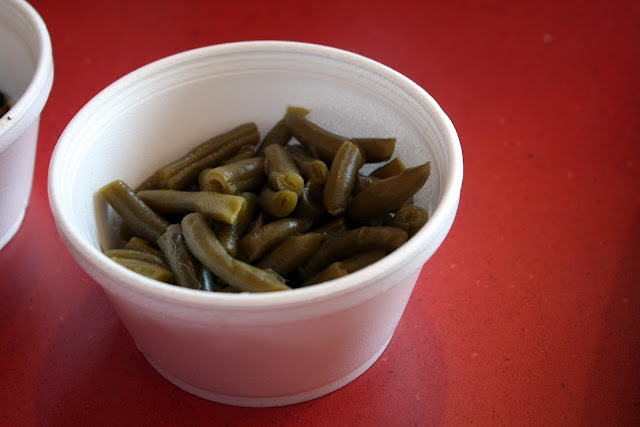 Elizabeth got green beans with her sandwich and I tried them. Good, not great. I appreciated the fact that they were not drenched in butter, but they tasted like they had been cooked the day before and reheated quickly before being served to us. 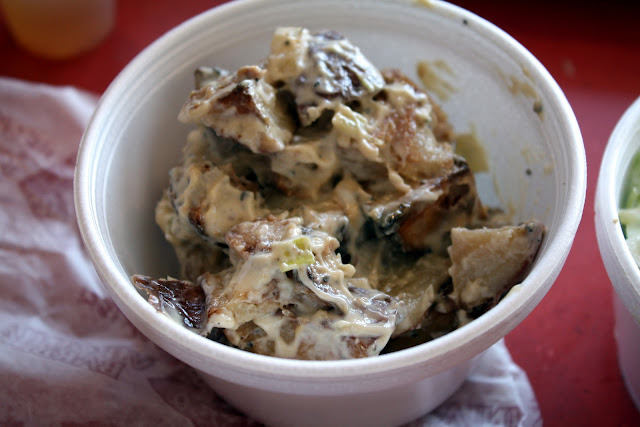 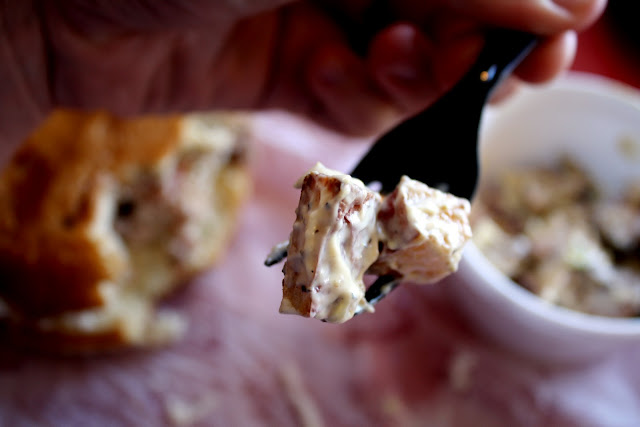 We both got containers of roasted red potato salad. This was fantastic and we both loved it. The potatoes had a slight crunch from the skins, the interiors were mushy, and the dressing - I'm guessing a mayo/mustard mix - was the perfect ratio: enough to coat the potatoes but not so much as to drown them. 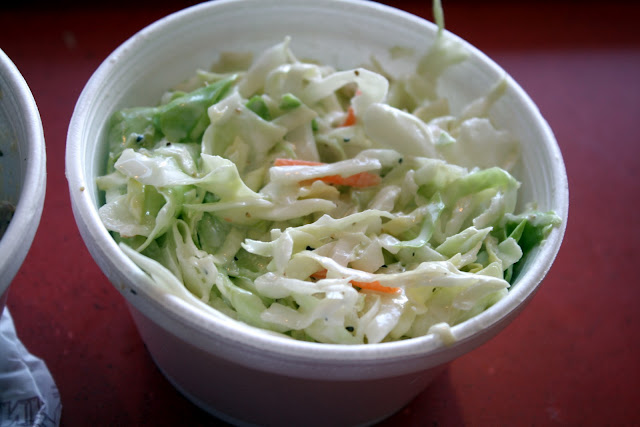 The cole slaw was delicious, too: fresh, crisp cabbage and a not-too-heavy dressing. 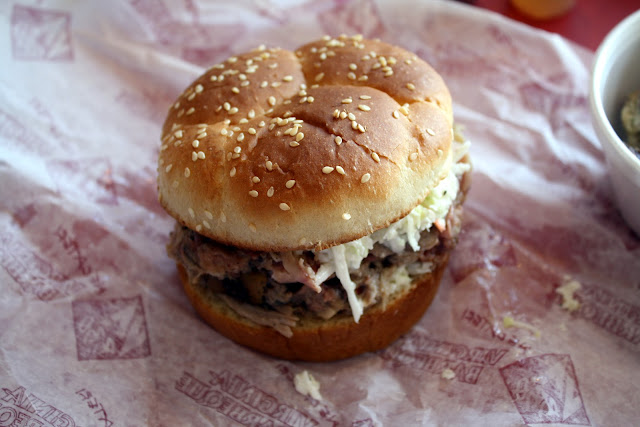 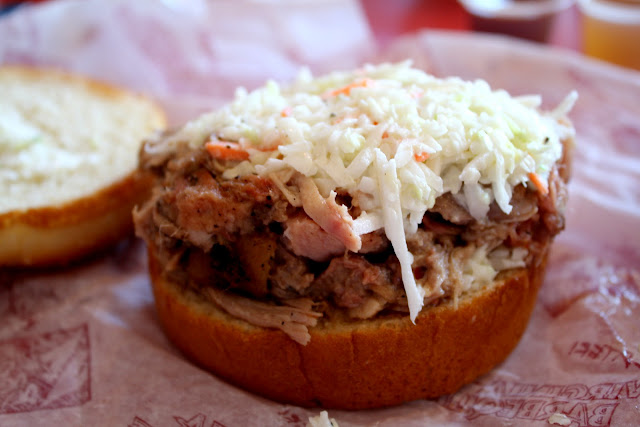 My heart sank a little when I unwrapped my sandwich: it came on a not-very-fresh sesame seed bun. The thing felt like it might have been left out overnight on the counter. I feel like I have written this more than one hundred times but I will make it one hundred and one: people who are proud of their barbecue don't want you eating it on any bread, they want you to taste the 'cue itself. But if it has to be on bread, it should be soft, fresh white bread. Not a stale bun.

The thing that magnified my dislike for the bun is that the pork itself was really good: tender, lean, with only a slight taste of smoke. It definitely deserved a better bun. Elizabeth wasn't as big a fan as I was, but she got a piece of bone in only her second bite of sandwich. I've been there before and I know how annoying it is to have your sandwich-eating interrupted by a bite of bone. It sucks. But my sandwich was bone-free and I certainly enjoyed it, average bun and all.

The thing with chain barbecue is that far too frequently the offerings are sub-par. I've had some really good meals at places like Lucille's, Moe's Original, and Famous Dave's, but I've also had some absolute junk, stuff you would find in a high school cafeteria. So I'm not a fan of chain barbecue.  I have to try another couple of Virginia Barbeque locations before I can proclaim it my favorite chain, but I have a hunch it might be.
Posted by JustinM at 10:00 AM

roasting the potatoes before putting them in the salad is genius...can't wait to try that.