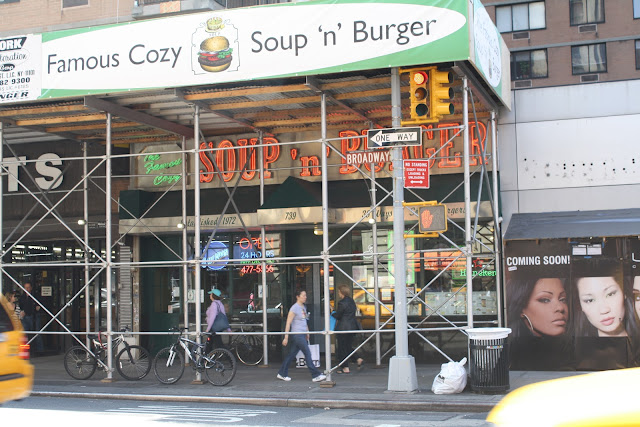 It was a beautiful day and we decided to go for a walk across the Brooklyn Bridge into Manhattan. We ended up walking up Broadway for a couple of miles, popping into stores, looking at things we need to furnish our new place. Eventually I got really hungry. There was a diner across the street: Cozy Soup 'n' Burger.

"Have you ever been there?" I asked Elizabeth.

"No," she said, "but I have walked by it many times and it's usually crowded."

We decided to give it a try. 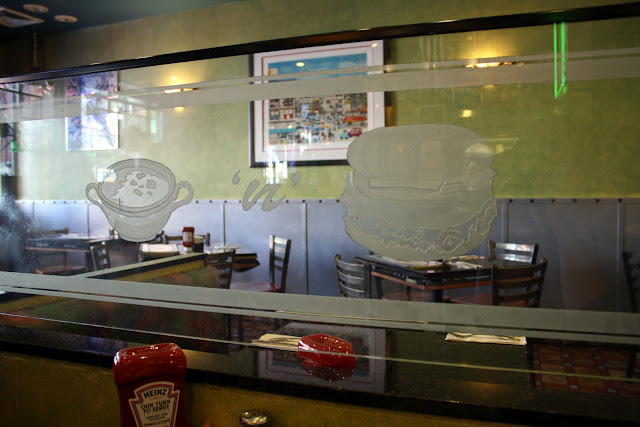 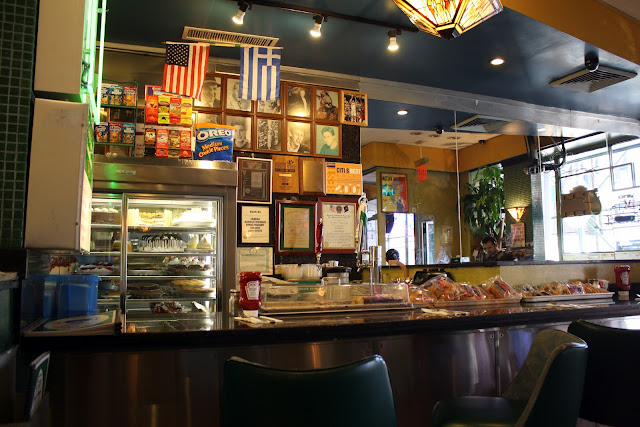 This was close to three in the afternoon and the place only had one other table in it. 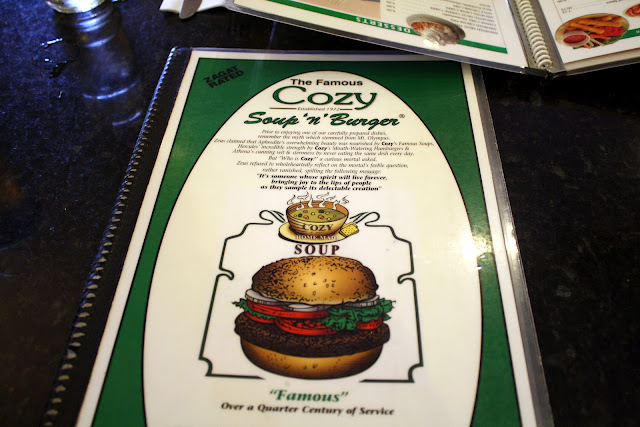 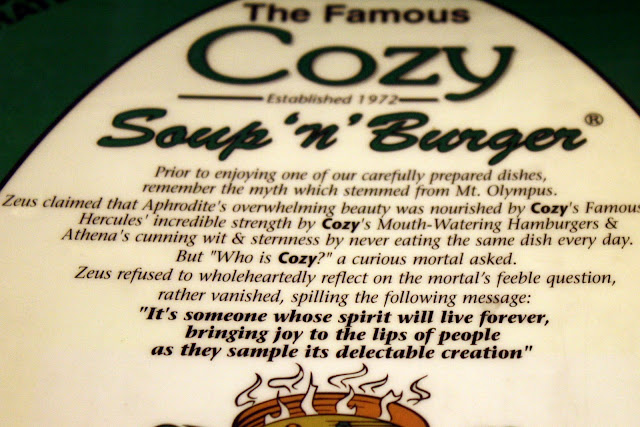 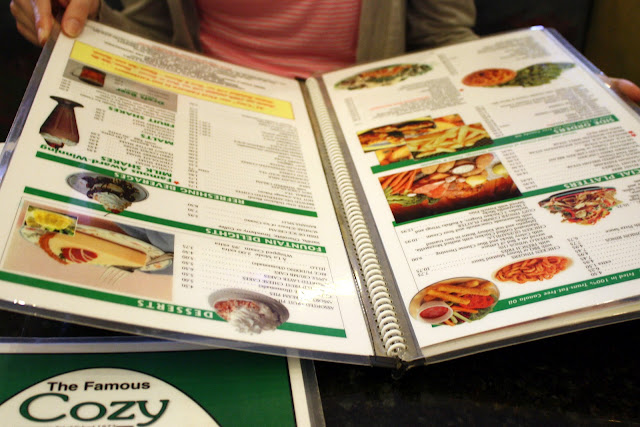 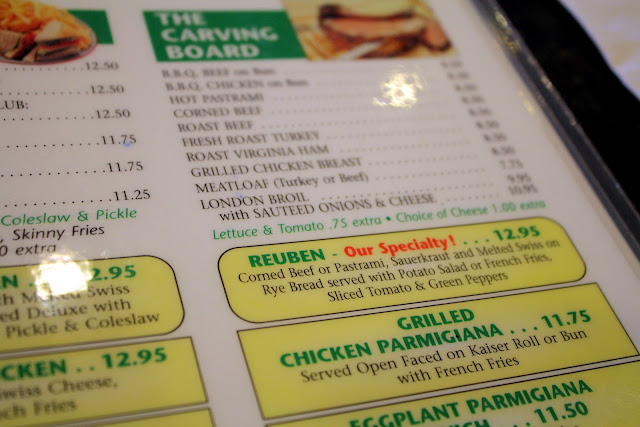 The menu is extensive - any kind of sandwich you can think of and most other traditional diner dishes. 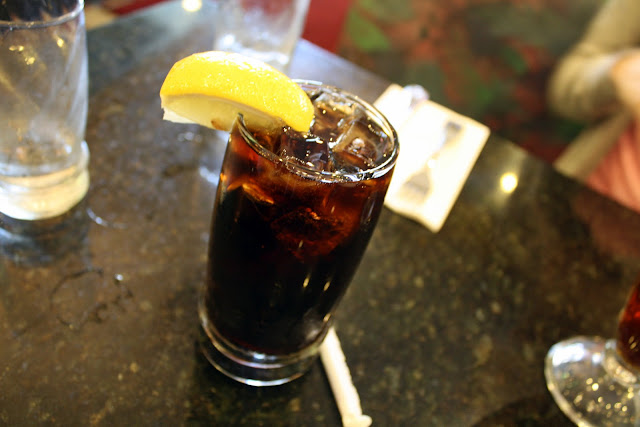 I'm getting used to the fact that lots of diet sodas I order around these parts come with lemon. I don't use it but it looks attractive. 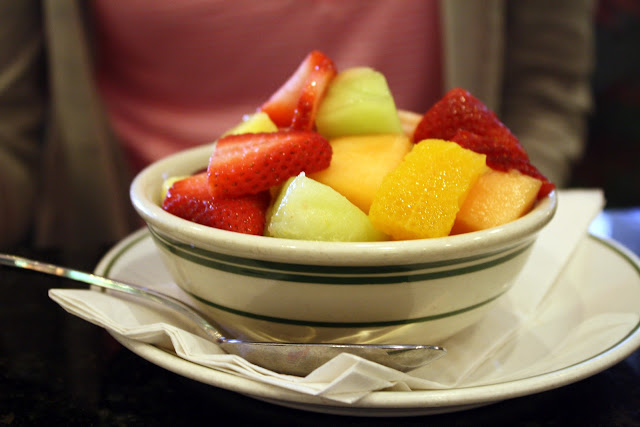 Elizabeth wasn't nearly as hungry as I so she just got a fruit salad, which she liked. 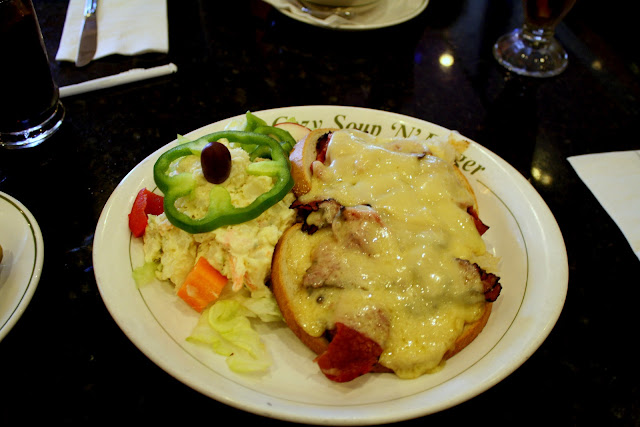 But I was really hungry so I ordered the pastrami Reuben with potato salad. It came open-faced, smothered with cheese and letting off steam. The bread was almost too hot to touch. The served asked if I would like some Russian dressing. I hadn't thought about it but said "sure." 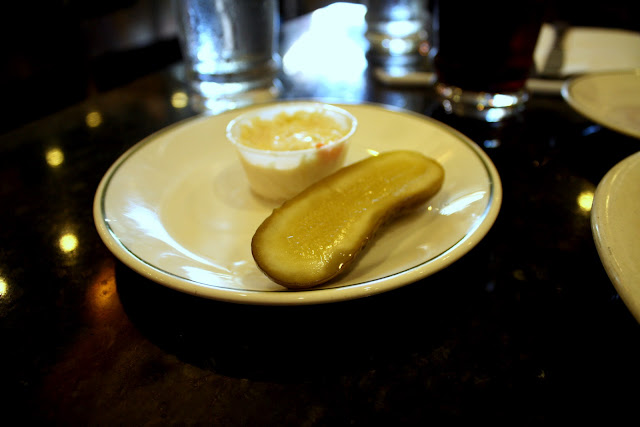 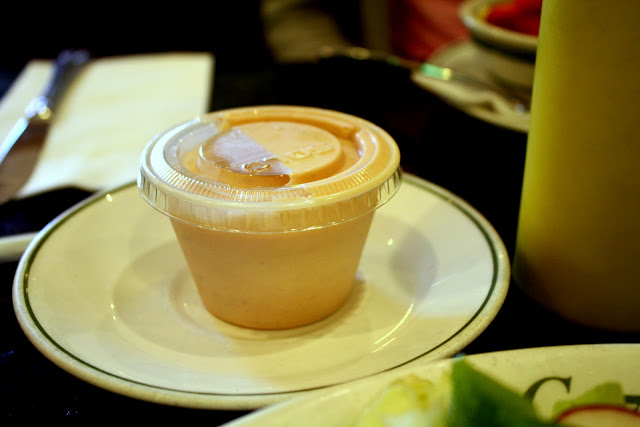 He brought me cole slaw, a pickle, and the dressing. 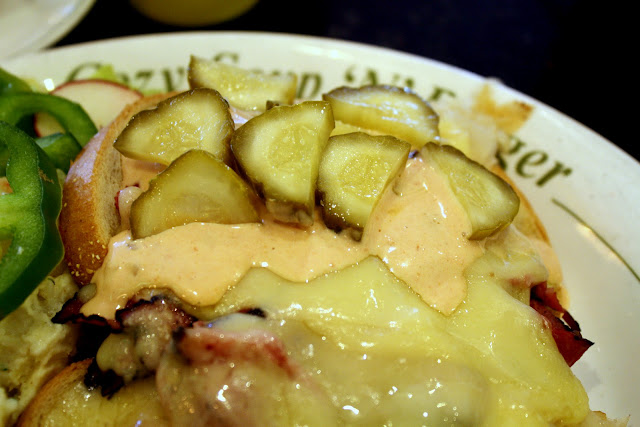 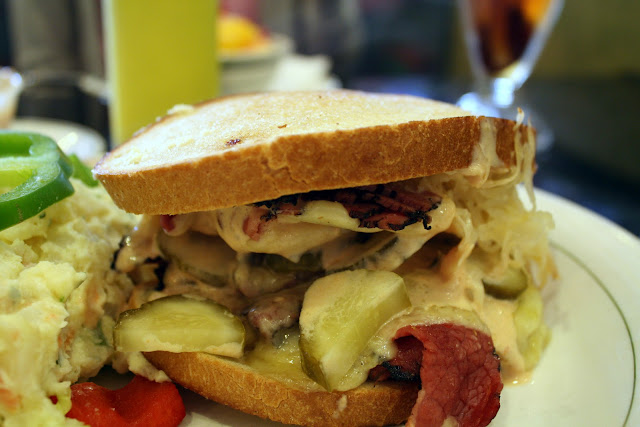 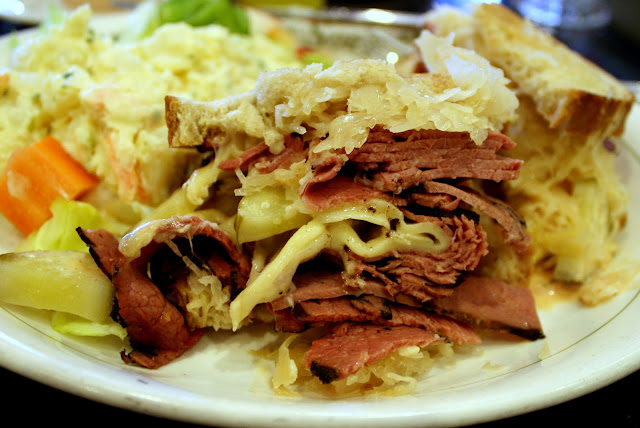 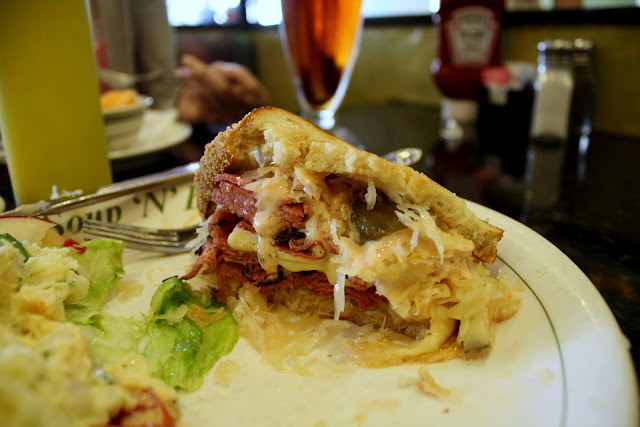 It was a really good sandwich. It wasn't a Langer's or Katz's pastrami, of course, but it wasn't claiming to be. It was just a solid diner sandwich, even better than I was expecting. The pastrami was not fatty at all and the kraut was delicious. I ate half of the sandwich and could feel myself getting full. But I wasn't going to lug the other half of the sandwich around with me. And I certainly wasn't going to leave it behind. So I ate it. 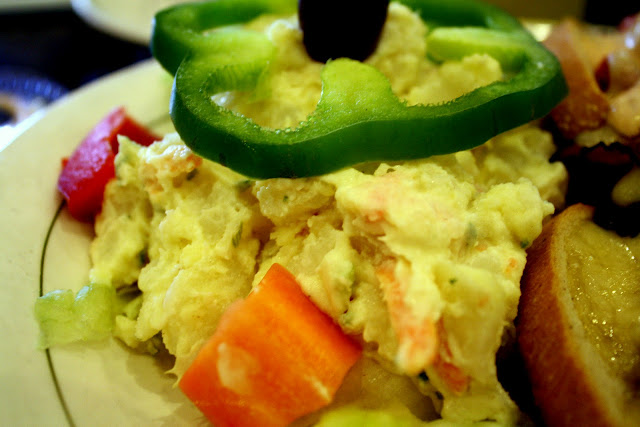 I was not a fan of the potato salad. The potatoes were too tough and the whole thing was difficult to eat. But to be honest, I didn't really care: eating the sandwich was enough of a task, and it was good enough that I didn't care about eating anything else.

Cozy Soup 'n' Burger wasn't great, but it was good. I would have no problem returning, although I imagine I never will: I'm sure there are hundreds - if not thousands - of places in the city that serve some variation of this menu and do it just as well if not better.
Posted by JustinM at 9:13 AM

I don't know how I landed on your blog a couple of months ago, but I am so glad that I did. You seem to have a simply perfect style and format for food reviews. Your photographs are good, and you consistently hit points of interest with your narratives.

I look forward to seeing new posts from you in my reader feed and wanted to let you know that your efforts to document and share your culinary experiences are appreciated even outside your circle of friends.

There is something about the name of the place that makes me happy.

ania: Thank you for the kind words. I hope you keep enjoying.

I used to rehearse for improv down by nyu and this place has some awesome cheeseburgers and fries. Huge, fresh, cooked really well...just a diner burger but so so good! If you go there again, definitely try the fries, at least.

It's gotten to the point that there are so few places where I like fries these days that I almost always order potato salad when that is an available substitute. I guess I screwed up here.

Today,I had the truffle-garlic fries, well-done, from Slaw Dogs. YUM.

We made a quick trip up to NY on Monday to hang out with my mom who was there with a friend. We hit up the Shack Shack chain and really enjoyed our burgers. Hopefully you'll get us a review soon.

Maybe we need to meet up at some point this summer for some baseball, beer, or barbeque.

We almost went to Shake Shack last night but Liz was an hour late getting home so we went to Five Guys instead because it's a few blocks closer and we were both really hungry. I'll try to do it over the holiday weekend if it's not raining.

Oh and I'm thinking about doing my first Cyclones game in June or July.