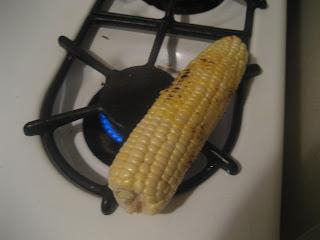 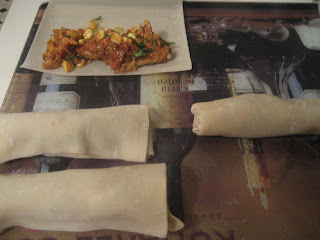 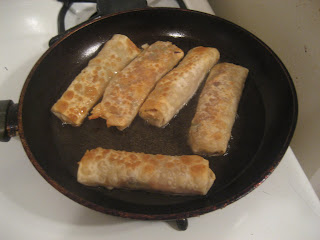 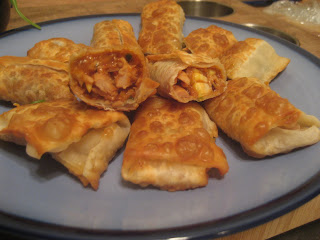 Inspired by yesterday's picture of the Jazz Kitchen pulled pork egg rolls, and wanting something simple to make during the World Series, I decided to make some egg rolls. I was thinking about buying some pre-made pulled pork at the store (I wanted this meal to be something that could be made entirely in view of the television) but all they had was Lloyd's, and I'm not a big fan of that. But they did have some "Jack Daniel's Pulled Chicken." I've never been crazy about Jack Daniel's barbecue sauces, but I figured it would be better than Lloyd's, so I decided to give it a try.

I cooked the chicken in the microwave and grilled a piece of corn on the stove (I really wanted to watch the game) and mixed those together with some cilantro. I took a taste before I started rolling the egg rolls just in case it was really bad and I had to order a pizza, but it was surprisingly good. It wasn't exactly great barbecue, but for chicken cooked in a bag in the microwave, it was definitely a surprise.

The egg rolls fried up in about three minutes and my friend and I devoured them. There are still three small pieces left that I plan to eat as an appetizer tonight before game 2.
Posted by JustinM at 3:06 PM