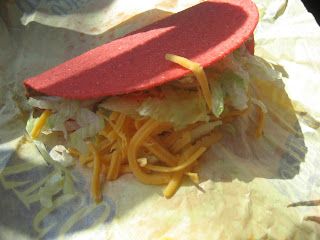 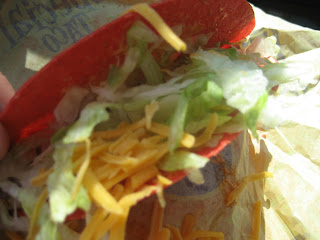 I have not eaten at Taco Bell since 1996. I have not had Tequila since then, either, both based on the same incident. You definitely don't need to know the details, but you can guess. (Imagine that combination then imagine how stupid you were at 17. Double that and you have an idea how stupid I was.)

But the promotion for the Volcano Taco looked good, especially the commercial where the guy's mouth catches on fire, so I figured I'd try one. My friend and I went to a Taco Bell drive through. It was not pleasant:

So I get my taco and open it up. Not too impressive. I was not expecting a cheap taco to be overflowing with meat. But this hardly had any meat in it. I mean, it might have had an ounce of meat, tops. I took pictures from several angles trying to get one that had a good picture of the beef, but it was pointless. The taco was decent for a fast food taco, and the sauce was good. Actually, the sauce was very good: spicy but full of flavor. But I could not get over the fact that there was hardly any meat in the taco. My return to Taco Bell was less than triumphant.
Posted by JustinM at 2:05 PM