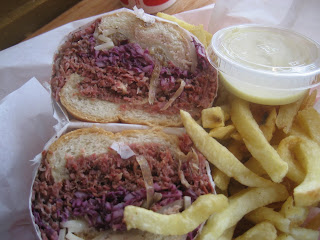 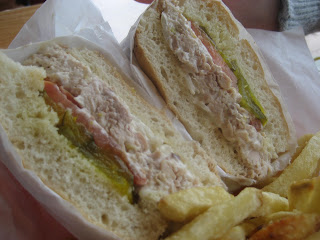 A friend of mine saw my entry for The Oinkster on my barbecue blog a couple weeks ago and wanted to eat there. Saturday we decided to check out the Americana at Brand for the first time so we stopped in for lunch. (By the way, I was completely unimpressed with the Americana. As far as I could tell it was just an uglier version of the Grove, with residential space. Yes, it's nicer than the Galleria, but so are most crack dens.)
-
I ordered the Oinkster pastrami (with Gruyere cheese, caramelized onion and red cabbage slaw) and my friend got the chicken salad sandwich. I had eaten this pastrami sandwich shortly after Oinkster opened and I remembered it as being pretty good, which is why I was shocked when I took a bite. It was horrible. The meat was as salty as any pastrami I have ever tasted, and I could not taste the onion or the cheese. The fries were decent as usual. My friend let me have a bite of her sandwich; it was much, much better than mine.
-
We each ate half our sandwiches and put the remaining half in a box. The next evening I took mine out of the fridge and figured I'd give it another shot. I kid you not - it was fantastic. The pastrami was completely balanced by the caramelized onions, the sweetness of which were very apparent the second time around. This was the sandwich I remembered from a couple years ago. I even took a piece of pastrami out of the sandwich and ate it by itself - it wasn't salty either. I cannot explain why this happened, but then again I've never been terribly bright.
Posted by JustinM at 7:27 PM