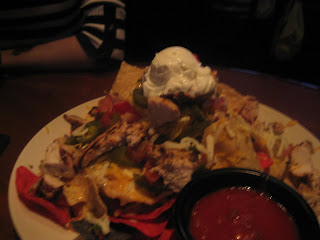 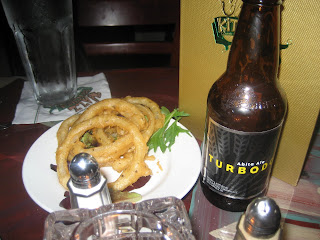 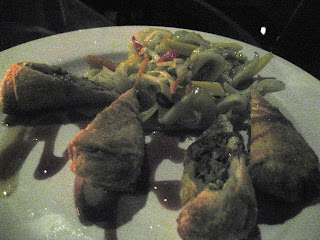 Several years ago one of my best friends worked for the Anaheim Ducks (they were the Mighty Ducks then) and I used to go down there several times a year to see games. I'm not a hockey fan at all, but I freely admit that watching hockey live is spectacular. There is no sport with a bigger discrepancy between watching it live and watching it on television. You can follow the puck, see the plays develop, and get a sense of just how good the players are. (On television it always seems like maybe I can skate as fast as the players. In person it becomes obvious I would drop dead within 45 seconds of trying to keep up with an NHL team.) And it didn't hurt that the tickets were always free, including one game where my seats were against the glass, one of the best seats I have ever had for any sporting event.

After the games we would go across the street to JT Schmid's and have a couple beers, or head up to Downtown Disney and play a few games at the ESPN Zone. On one such trip I met one of my friend's co-workers, who would become his girlfriend, and eventually his wife. To celebrate her most recent birthday he invited a big group down to the ESPN Zone to relive old times.

The table I was at had a big plate of "Zone Queso Chips" - basically just nachos with chicken. It was one of those dishes about which there is nothing special, but seems much more enjoyable when shared at a table of friends with a few beers, reminiscing about old times. After eating those we went upstairs to the game room. I played a pitching simulator. Garret Anderson got a hit off of me but I struck out ARod on 4 pitches. It must have been a pressure situation for him.

After a few hours at the ESPN Zone, a friend and I went for a walk around Downtown Disney. There was some good music coming from Ralph Brennan's Jazz Kitchen, and we both wanted a little something more to eat, so we took a seat on their patio. It was a warm night and I had a bottle of Turbodog. We also had some "Abita Beer Battered Onion Rings," which were good, and some barbecue pork spring rolls. (I apologize for the terrible quality of the picture of those.) They were made of pulled pork and sauce, and served with cole slaw and a "pomegranate raspberry glaze" that was nowhere near as sweet as I feared it was going to be.

This was my first time at Downtown Disney in several years, and it will probably be a few more years before I go back, but it was still a fun evening. None of the food was anything special, but it was great seeing old friends, and it's always nice to strike out a guy who has made 197 million dollars in his baseball career and yet never played in a World Series.
Posted by JustinM at 1:56 PM

Ah yes, the "coolest game on earth" (to steal a phrase from some lame hockey marketing campaign)... You may or may not know my affinity for hockey, and you may or may not care too much for the sport itself - in any event, you have identified the great truism within the sport: Absolutely F'n fantastic live - without peer... but boring as all hell on the tube.
As is the norm, your entry has led me to think of similarly fated deals: I present the better in-person than on the tube and vice-versa list:
Hockey (great live - TV bad)
Frisbee (great live - TV horrid)
Sex (depends how tired I am)
Monkey fights (live all the way)
Stories on Antarctic (TV is best)
Juice Newton Concert (neither)

I'll take your word for it. I've only done one of the 6 things you listed.... and the monkey beat the crap out of me.

I'll dispute the appeal of hockey on TV, if only because of the advent of HD. Perhaps more than most sports, hockey is AWESOME in HD.

And I challenge you to go back to Downtown Disney next May. I'm sure A-Rod will hit a home run off you then. But only because it's May.

I will certainly agree that HD has helped hockey more than any other sport, but even with that, it still pales in comparison to the live game. Of course, take my opinion with a grain of salt; I have spent 29 of my 30 years in Southern California. I did not watch a Kings game until Gretzky joined the team and I did not attend my first live game until I was 21. Hell, I saw women's rhythmic gymnastics in the Olympics and the L.A. Gay Rodeo before I ever went to a hockey game.