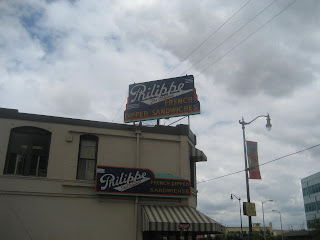 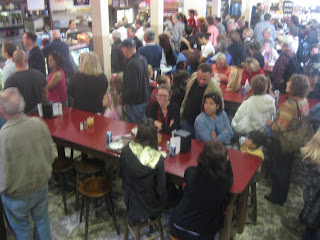 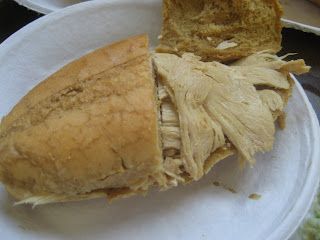 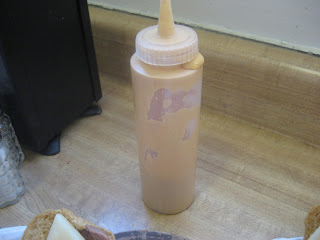 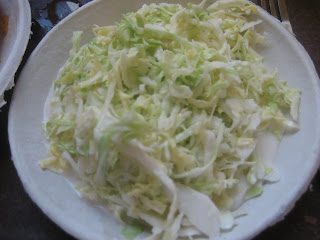 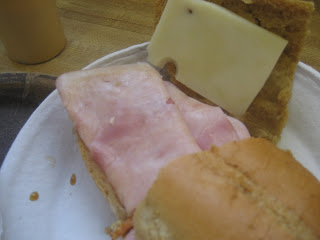 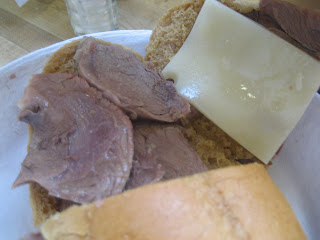 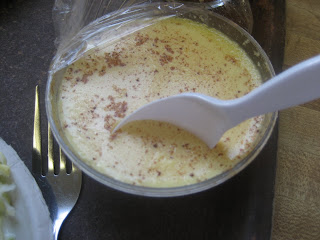 Philippe's is probably my favorite place in all of Los Angeles. If I could choose my last day on Earth, it would be something like this: A Saturday in summer, the Victory Park farmer's market when it opens and oatmeal raisin cookies for breakfast. A walk around the Rose Bowl. Lunch at Philippe's: two turkey sandwiches, cole slaw and two iced teas. I would smuggle in a glass pot so I could fill it with mustard and put it on the table to share with my fellow diners; we would not have to use those idiotic, nanny-state enforced squeeze bottles they have now. And I would go heavy on the mustard. A day game at Dodger Stadium, Dodgers vs. Angels. And a stop at Porta Via after the game to pick up food for the Arboretum to watch the California Philharmonic, where I would share a Georges de Latour Cab with some friends.
-
Philippe's just celebrated their 100th birthday. As I explained to a friend of mine who moved here from New York this year, that is like 400 years on the East Coast. My friends and I used to eat there in high school before Dodgers games. When my dad was a kid and the Dodgers were still in Brooklyn, my grandfather, an L.A. County Sheriff's deputy who sometimes worked at the Hall of Justice, would take him to Philippe's. I once did two weeks of jury duty downtown and I ate at Philippe's every single day. It is still my first stop whenever I get a craving for a sandwich.
-
This has been my standard order as long as I can remember: a turkey sandwich, double dipped, with slaw and iced tea. Sometimes I may get two, sometimes I may get a turkey and a lamb. I have never had a bad one. If I'm having dinner before a game at Staples Center or the Galen Center, I may have a beer, but more likely than not it will be iced tea. I have a particular fondness for their tea, served in small glasses that I order two at a time, like the pints of ale at the legendary McSorley's Old Ale House in Manhattan.
-
I'm not going to get into the whole Philippe The Original vs. Cole's P.E. Buffet debate. They both make great sandwiches. (Of course, Cole's has been closed for remodeling for almost two years, which would not happen at Philippe's.) Many people are passionate about Cole's being better, and they may even be right, but I don't care. I will always choose the sawdust of Phillipe's, the big open room and painfully slow lunchtime lines (any review or news story that claims the lines move fast is a complete lie, most likely written by someone who has never actually waited in one of the lines,) over the darkness of Cole's. I once brought a friend of mine here, a Geordie with the most impressive appetite I have ever seen, and after his second sandwich and beer he wondered aloud whether he should go for round three. In the end he decided not to, but still pronounced Philippe's his new favorite restaurant.
-
I had not been there in a couple months, but I got a craving recently with all the hullabaloo surrounding their 100 year-anniversary. They sold sandwiches for 10 cents at the celebration and the line stretched thousands of people long. Mayor Villaraigosa worked the counter. Huell Howser emceed the event. Even "Roger the Peanut Man" was there. (When I was a kid Roger came to my school and tossed a bag of peanuts to every student; never in any baseball game, organized or playground, was I more afraid of dropping a baseball than I was of dropping the bag of peanuts he threw to me. I caught it, although he tried to trip me up with a double-fake, behind-the-back toss.)
-
So when my brother called me today and told me he was going downtown to pick up a "green screen" for something he is producing, and asked if I would ride along, I said "Sure, as long as we can go to Philippe's," even though I had already had lunch. He, of course, agreed. I had a turkey sandwich, cole slaw, and custard. He had a ham sandwich and a lamb sandwich, both with Swiss cheese. He loved the lamb but said the ham, which he had never had before, was cold and was the worst sandwich he has had there. I tried it and I agree. We still took at least half of it with us, though, because I know we will find someone who wants it.
-
I could eat here every day for the rest of my life and I would not get tired of it.
Posted by JustinM at 7:24 PM

Ah, the sweet coincidence of your post today... yesterday, I myself ventured to this hallowed haunt (holloween thematic) to have the standard - double dip beef with blue cheese, mac salad, and a coke. It just seems right...

Man I love me some sammies!!

Nice. I know everyone has a Philippe's story - even friends of mine who have lived here only a few months - but I did not realize you had one so recently. That makes me happy. If everyone in town ate there at least once a week, it would be a much happier city. (Although the lines would be longer at Philippe's... barely.)

nice blog I added both of your blogs to my blog list @ http://offthestripdining.blogspot.com/

feel free to stop by and visit us in Las Vegas

Agreed. Philippe's is an institution more than a restaurant