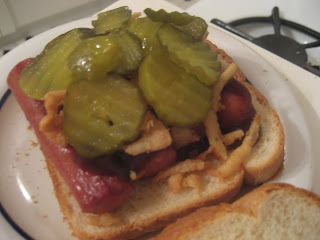 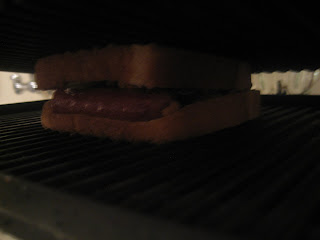 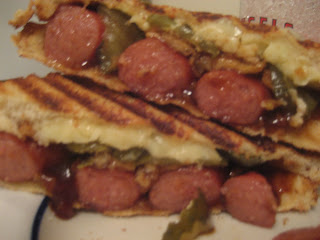 Picasso created Guernica, the Beatles had "Hey Jude," and Clint Eastwood starred in not one but two movies with an orangutan. Now, I too have created my masterpiece.

I had been looking forward to eating the remaining hot dogs from last week. Anyone who has ever bought hot dogs at the grocery store can see the punchline coming: I had bought a package of 10 hot dogs but only 8 buns. So I had two dogs left. Undeterred, I decided to cook the wieners and just eat them on white bread. Then I thought 'why not put some cheese on it and put it on the panini press?'
After grilling the hot dogs, I added pickles, fried onion pieces, Guinness Bulls Eye, and pepper jack cheese, then grilled the whole thing. It was fantastic. I may never go back to making hot dogs the traditional way again.
Posted by JustinM at 12:34 PM