A day after wine tasting in Temecula, three friends and I decided to do a fast food tasting, either new promotions or items we had not tried before. My friend Zach asked me what time I thought Dairy Queen started serving lunch. "I don't know," I said jokingly, "why don't you call them?" So he did. I didn't even know Dairy Queens have phones. Do they get to-go orders? Do they take reservations?
-
"You know how, when you go wine tasting, you see some of the same people at different wineries throughout the day?" my friend Tyler asked. "I'm going to feel very pathetic if we see the same people at different fast food restaurants." (I saw his point, but I suddenly wanted very badly for this to happen.)
-
We drove down the the DQ in Oceanside, right by the beach, and ordered their new chicken strips basket and the Flamethrower burger. The chicken strips were actually pretty good: big pieces of crispy chicken. The gravy they came with, however, sucked. The flamethrower burger was one of the worst burgers I have ever tried. It tasted of freezer burn and hot sauce. Not a single one of us thought it had any redeeming qualities. 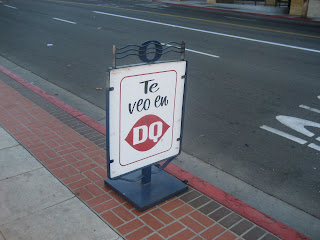 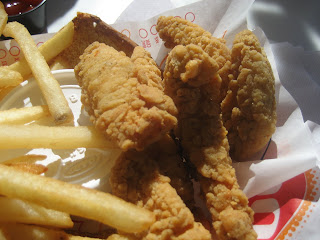 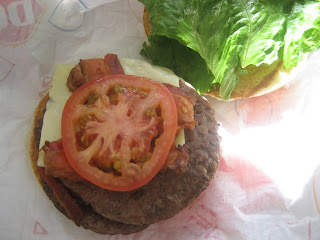 We had wanted to get a fish taco at a Mexican joint next door, but we waited in a line that did not move for several minutes and decided to leave. Besides, their fish taco was grilled, not fried, and that seemed too healthy for our adventure. The bucket of Tecate was tempting, but not strictly necessary at 11 in the morning.
-
Next up we went to Arby's and tried their "Mac & Cheezers" and popcorn chicken shaker. The mac & cheese was decent, although I have never liked this trend of breading and frying mac & cheese. I ate one and that was enough. The popcorn chicken was quite good, shaken in their buffalo sauce. We got a free order of mozzarella sticks with the mac & cheese, but they were pretty bad and I only ate half of one. (Zach also got an Arby-Q sandwich, because apparently we weren't eating enough. And somehow we ended up with two orders of curly fries, which none of us could explain.) 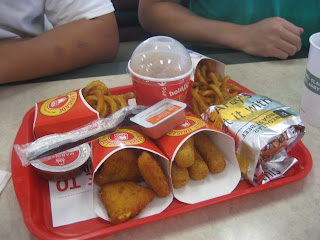 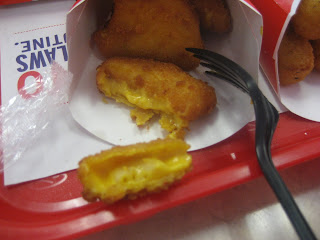 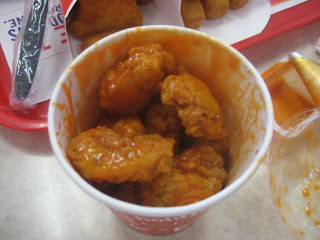 Next we stopped at Jack in the Box to try their pita sandwiches. I was pretty excited about this. When I was in high school I loved Jack and would frequently stop there after basketball practice and get a Jack's Spicy Chicken (back then it was called a "Spicy Crispy Chicken Sandwich," which apparently was too time-consuming for some people to say) and toasted raviolis. They got rid of the raviolis a long time ago, which I never understood, as they were one of the best fast food items ever. I love pita sandwiches, so I had high hopes. We got the steak, crispy chicken, and fish, as well as an order of their fried mac & cheese, to compare it to Arby's.
-
All three of the pitas were horrible. Just disgusting. My friend Tyler took one bite of the fish and made a gruesome face (and this is a guy who, at Arby's, found something fried on the tray that looked like a clump of hair and ate it anyway.) I followed and immediately spit it out in the trash. It tasted like a stale fish stick. (Zach and Elizabeth refused to try it, as they are much smarter than we are.) The steak was tough and flavorless and the chicken was thin and strange tasting. And their mac & cheese was over-fried on the outside and chewy and stale on the inside. Overall, it was just a bad decision to go to Jack in the Box. 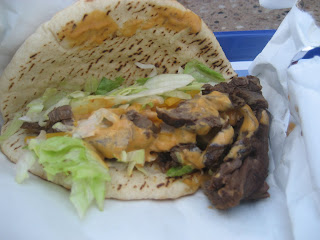 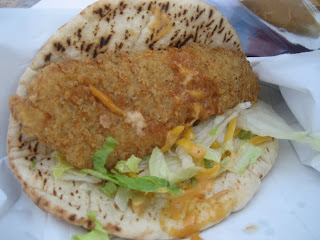 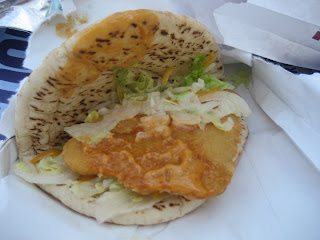 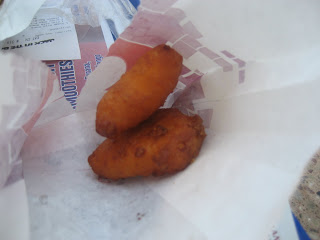 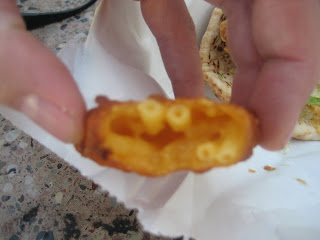 But I knew we could count on Popeyes to come through. I love Popeyes. Years ago some friends and I were at Jazz Fest in New Orleans, in the "Popeyes Blues Tent," waiting for Chris Smither to come onstage. It just so happened we ended up sitting next a huge man, probably 400 pounds. He was a friendly guy, although a bit deranged, and when we told him we were from Southern California he launched into a hour-long diatribe about KFC vs. Popeyes, running down every item on both menus - with which he was intimately familiar - and explaining why Popeyes items were superior to their KFC counterparts. My friend Kevin kept going out of the tent to get beer for us, and laughing when he returned to find our friend still discoursing about fried chicken. It was one of the top ten moments of my life.
-
We ordered a "Delta mini," a "chicken biscuit," and "Louisiana nuggets." It was all delicious. The mini sandwich and the nuggets came with their "Delta sauce," a spicy sauce that may well be the best fast food condiment I have tasted. These Louisiana nuggets are the best thing I have ever tasted at Popeyes. 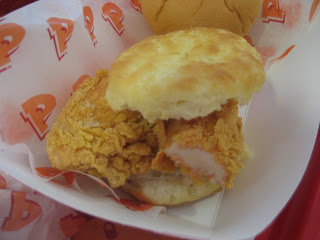 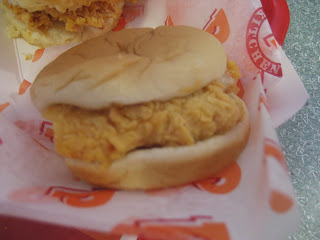 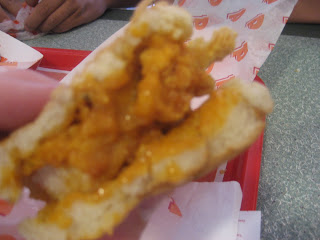 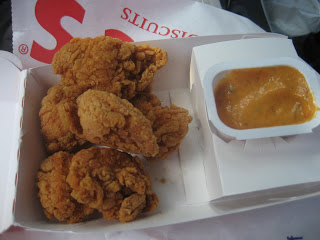 After Popeyes we debated whether we should squeeze in one more place, but ultimately decided against it. Perhaps next time.
Posted by JustinM at 1:42 PM